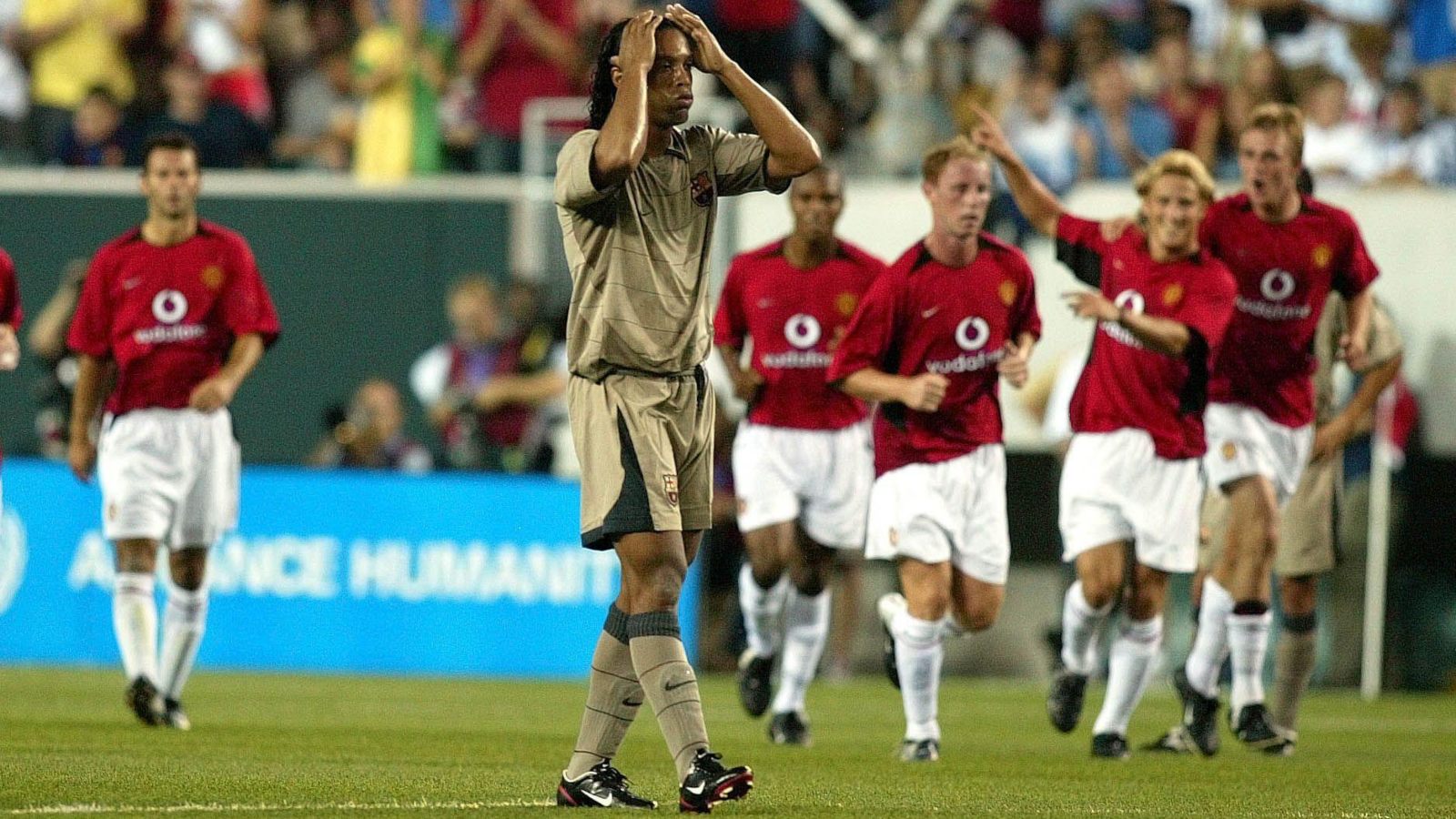 With Chelsea’s interest, in addition to his obvious reluctance to quit Barca, might Frenkie De Jong emulate these five stars?

Alan Shearer
The summer of 1996 presented the England striker with a head-versus-heart dilemma: join Sir Alex Ferguson’s Double winners or return to his hometown team.

Manchester United chairman Martin Edwards revealed later that Shearer had visited Ferguson’s house and “assured him he wanted to come”. But Blackburn chairman Jack Walker did not want to sell the centre-forward to the Red Devils and Shearer was reluctant to defy him.

So heart won in the end, though both clubs will claim they came out on the right side of this £15million deal. Shearer headed back to the Newcastle and went on to become the club’s greatest ever goalscorer. His 206 goals couldn’t win the Magpies a trophy but they took Newcastle into the Champions League amid Premier League finishes which ranged from runners-up in his first season to 14th in his second-to-last campaign.

United wiped the custard from their chops and promptly won another title. And a further four during Shearer’s Newcastle career, in addition to the Champions League, a couple of FA Cups and a League Cup.

Shearer insists he has no regrets over snubbing United  – twice – and the Red Devils managed just fine without him. But how much more would they have achieved together?

Patrick Kluivert
While Ferguson could see the logic in Shearer’s decision – even if he didn’t agree with it – the United boss couldn’t fathom Kluivert’s thinking when he turned down the Red Devils in 1998.

United had agreed a £9million fee with AC Milan for the then-22-year-old Holland striker but Kluivert wasn’t interested in hearing what Ferguson had to say. “Maybe he doesn’t know how big a club Manchester United is,” Ferguson reflected at the time. “I’m surprised he didn’t give himself the opportunity to speak to us and now we hear he wants to go to London. If that is where he wants to live, there is nothing we can do about it.”

Kluivert was rather more open to an offer from Barcelona and he moved there later that summer. Barca won the title in Kluivert’s first season pairing him with Rivaldo – United completed the Treble with Dwight Yorke and Andy Cole up front – but that was the only medal of his five-year stay at the Nou Camp.

Ferguson had Yorke and Cole’s partnership in mind when he discussed Kluivert’s snub in his first autobiography. ‘When Patrick Kluivert, the gifted young Dutch centre forward, was so unimpressed by our approaches in 1998 that he wouldn’t even do us the courtesy of talking to us, I had no trouble believing that he was likely to be the bigger loser than we were,’ Ferguson wrote.

‘As I write, there is a growing mountain of persuasive evidence that the Dutchman’s indifference indirectly did us a huge favour.’

Transfers, fixtures, general ennui: a reason to be miserable for every Premier League club

Ronaldinho
Barcelona and Real Madrid wanted David Beckham in the summer of 2003, with Barca’s presidential candidates putting the England midfielder front and centre of their election campaigns. Sandro Rosell negotiated a deal with United and felt the move was “80 per cent” done but Beckham chose Real, a decision which changed the course of the summer.

Ferguson wanted Ronaldinho to replace Beckham but Barca had the Brazilian in mind as an alternative to the United star. The Red Devils had an agreement in place with PSG and, as Ronaldinho later revealed, “it was only a matter of details” before the deal was done. But Beckham’s rejection stung Rosell into action and Barca began their belated attempt to woo Ronaldinho.

The 22-year-old was convinced. “I wanted to go to Barcelona and follow in the footsteps of the great Brazilians who have played there in the past – players like Romario, Rivaldo and Ronaldo,” said Ronaldinho. “I want to be a big star and I have a better chance of being a big star with Barcelona.

“I will prefer the lifestyle in Barcelona, the way of life and the climate, too. It is not a good climate in Manchester.” Unless you’re a duck.

Ferguson channelled his disappointment into signing a 17-year-old from Sporting Lisbon instead: “I thought we’d clinched the deal, but when I flew to Paris to speak with him, the goalposts seemed to have moved somehow. His people complained that to me that it didn’t seem as though they were getting the same deal we’d previously agreed. The next thing I know, he was at Barcelona the following day.

“It was a big disappointment at the time, but we signed Cristiano Ronaldo that very same summer and perhaps we wouldn’t have ended up with Ronaldo had we got Ronaldinho.”

United players took their own retribution. Or, at least, they tried to.

Eden Hazard
The Belgium star was the most in-demand player of the summer of 2012 and Hazard certainly milked it. It seemed that United were leading the race for the Lille star but Chelsea made a late dash for the then-21-year-old and winning the Champions League certainly enhanced their pitch.

Hazard announced his decision on Twitter before the clubs offered their official confirmation and the player put his decision down to a chat with Roman Abramovich. “He is very simple and loves football,” Hazard said. “We were on the same wavelength, he wants to confirm Chelsea’s position at the top. Chelsea have made a good investment for me but I did not put any pressure on them. There was a struggle between Chelsea and United, but according to me Chelsea has the best project.”

One of Hazard’s former Lille team-mates Tulio de Melo elaborated on the meeting with Abramovich.

“He already had a verbal agreement with Manchester United, but there were other clubs wanting him,” Melo told ESPN Brasil. “But one day, the Chelsea’s owner had his yacht in Cannes. We were preparing ourselves to watch a film in the festival when Hazard appeared and said: ‘I can’t go with you guys, because I have a meeting with my agent and Abramovich right now’.

“They went to his yacht and when he returned, we were all having dinner in a restaurant. Hazard arrived with a wide-open smile and said: ‘Well, I think I’ll go there, I think he convinced me’. Right after that, they finished the transfer and he went to play for Chelsea.”

Ferguson insisted he had reservations about the figures anyway. “I see some values on players, like Hazard for instance. To me it was a lot of money. He’s a good player, but £34 million?”

“What we’re finding anyway, the climate for buying these top players – not just the transfer fees, the salaries, agents’ fees – is just getting ridiculous now. In the Hazard deal, Chelsea paid the agent £6million. The Nasri situation was the same. It’s all about what you think is value for a player.”

Ferguson signed Shinji Kagawa instead. And Chelsea made a 200% profit when they moved Hazard on to Real Madrid after he established himself as a Premier League star.

Samir Nasri
“One thing’s for sure: we’re not selling him him to Manchester United,” said Arsene Wenger in response to questions over Nasri’s Arsenal future. But the France midfielder was refusing to sign a new contract at the Emirates and Ferguson thought he had a plan to counter Wenger’s stance as he sought a replacement for the retiring Paul Scholes.

“We met with Sir Alex in Paris, in a hidden place, out of sight, so as not to fuel the rumours,” revealed Nasri in 2015. “But there was one thing that was a problem; I was asked to go to war with Arsenal to be able to join. I could not see myself doing it, especially with Arsene Wenger.”

Manchester City were a far more palatable option for Arsenal and all the elements in the equation satisfied Nasri too: “Roberto Mancini called me every day during the holidays,” he said. “I then decided that they really wanted me. I had a discussion with my agents. They asked me if I wanted to make history or be a player like any other at United.

“I said “Go ahead”. I won the title in my first season, so my choice was the right one.”