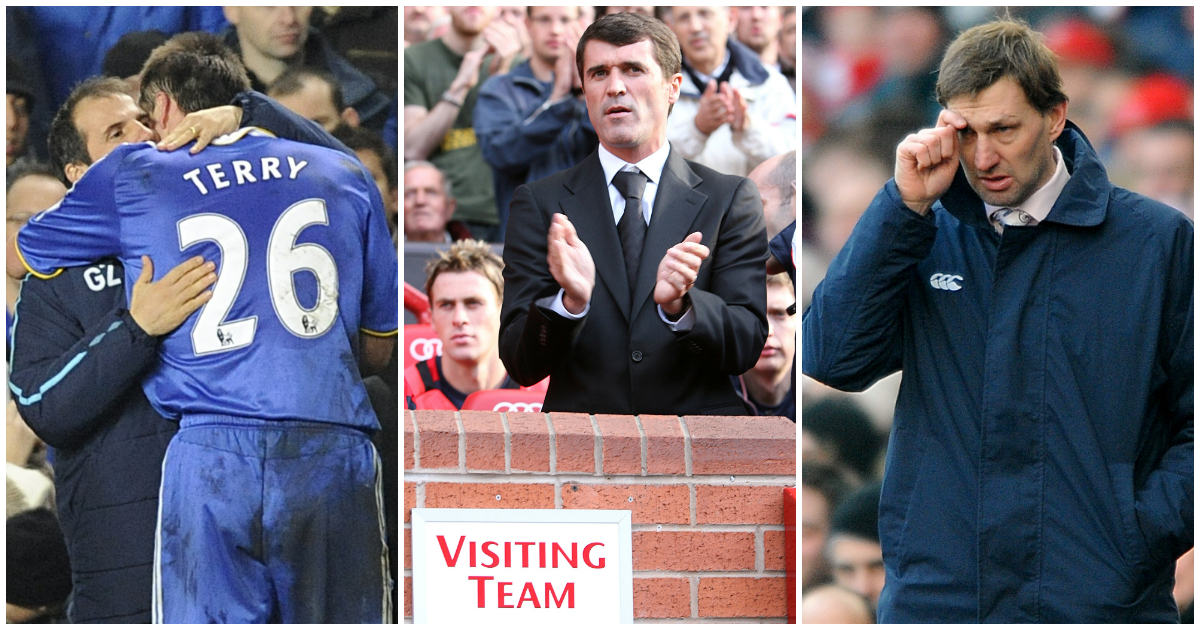 Steven Gerrard returns to Anfield as Aston Villa manager on Saturday. Here are five other returning heroes… none of whom won against their former clubs on their first reunion.

Bryan Robson
It feels like barely a week goes by without one of Sir Alex Ferguson’s former players returning to Old Trafford to sit in the opposition dug-out.

Gordon Strachan, Steve Bruce, Mark Hughes, Mike Phelan, Paul Ince, Roy Keane, Ole Gunnar Solskjaer and Jaap Stam have all managed against the Red Devils, with not a great deal of success between them.

Captain Marvel’s managerial record against the club he dragged through the mid-to-late 1980s isn’t good. Sixteen times he’s faced United, only once has he won.

The first time he went back was as manager of Middlesbrough, when he was assisted by another of Fergie’s former charges in Viv Anderson. He got the reception you would expect, though it wasn’t enough to make Roy Keane feel all warm and fuzzy. He was sent off after half an hour for sticking one on Jan Age Fjortoft, who had the temerity to tackle the United midfielder.

No matter, Fergie’s ten man beat Robbo’s XI thanks to goals at the end of either half from Boro old boy Gary Pallister and Andy Cole.

“I’m not expecting a red carpet to be rolled out, not at all,” said Keane before he took Sunderland to his old stomping ground. “There won’t be any hugs and kisses either,” he added.

Which wasn’t strictly true. Keane might not have embraced Ferguson but he was considerably warmer towards Solskjaer, who had just announced his retirement.

The game wasn’t great. Actually, it was f**king awful. United won 1-0 but Keane, surprisingly, wasn’t too downhearted. “There are different ways of losing and today wasn’t too bad.”

In the return fixture, United battered the Black Cats on Boxing Day, which at least prompted Fergie to throw Keane a Jonny Evans-shaped bone.

“After the game, Ferguson came into my office for a drink. When he was leaving he said to me: ‘Give me a call about Jonny Evans.’

“He could see I was down in the dumps after the game. It was the one time he showed me, I suppose, affection: ‘I’ll watch your back’. He caught me off guard – ‘he actually cares a bit’. ”

Gianfranco Zola
Zola and his assistant Steve Clarke were given a rapturous reception upon his first return to Stamford Bridge as a manager in 2008/09. And the West Ham boss took the acclaim before leaving with a much-needed point as the Irons hovered just above the relegation zone.

That was December 2008, and the Hammers’ draw was the third game in succession that Chelsea had failed to win at home, with the Blues missing the chance to move to the top of the Premier League table.

In four games against Chelsea, Zola drew two and lost two against three different managers. He would later return to the Bridge as assistant to Maurizio Sarri. Which didn’t go all that well.

Patrick Vieira
“I’m really looking forward to it,” said Vieira before returning to Arsenal for the first time as a manager with Crystal Palace back in October. “I had a chance to play for this club for nine years – I arrived when I was a kid and left as a man. This is the club where I played my best football so obviously going back will be emotional. But I will put that on the side because what is important for us is to perform well and try to get the points.”

Which he so very nearly did. Vieira kept a lid on his emotions upon being given a hero’s return but the former midfielder struggled to stay calm after watching the Gunners grab a barely-deserved injury-time leveller.

Arsenal fans hadn’t forgotten Vieira because he evidently hadn’t forgotten them. There was likely to be a little extra in the acclaim before kick-off after Vieira spoke out in April against Stan Kroenke while joining Thierry Henry and Dennis Bergkamp in backing Daniel Ek’s takeover bid.

“I was expressing myself as Patrick, ex-Arsenal football player,” he said. “I am in a different position to a couple of months ago so I’m not going to express myself in the same way as when I was just an ex-Arsenal player.”

Tony Adams
Another former Gunners captain returned in December 2008 and his Portsmouth side, somewhat appropriately, were beaten 1-0 with a goal headed in by centre-back.

“I thought it was 1-0 to the lucky Arsenal,” said Adams after David James had missed one too many crosses to allow William Gallas a late winner.

Still, that didn’t stop the ex-defender from relishing his reunion.

‘Adams enjoyed his return to the red half of north London, in spite of the result,’ read The Guardian’s match report. ‘The Arsenal legend bowed extravagantly to the club’s fans before kick-off and was the last person off the field at full-time as he milked the acclaim. He was feted more than any of the current Arsenal setup. “I know, it’s fantastic, isn’t it?” he said.’

He wasn’t quite so full of it six weeks later when he was sacked by Pompey during his son’s fifth birthday party after 16 games in charge.