The league's longest-serving boss tuned Harrogate into its forgotten club before putting the town on the football map... 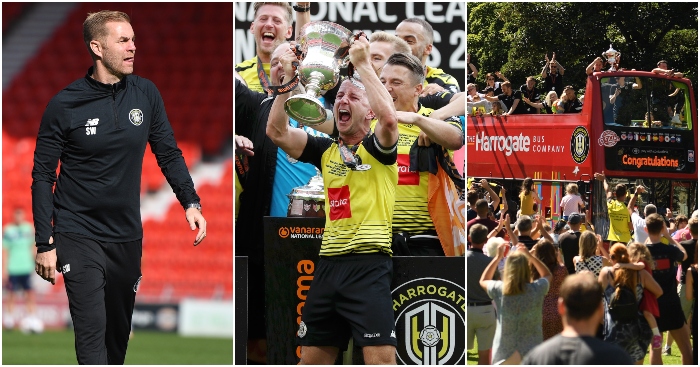 While the Premier League’s old guard climb over each other and everyone else for a bigger slice of the pie, the Football League’s newest member is about to apply the final strokes on a big picture that we can all admire.

This weekend, Harrogate Town will play their first proper home match as a Football League club after bunking down on Doncaster Rovers’ sofa for the opening month of the League Two season. Saturday’s first whistle at Wetherby Road will cap a head-wrecking, four-month whirlwind which serves as a fittingly mad conclusion to a 10-year transformation of the club from an insignificant part-time outfit to one of the EFL’s 92.

Town’s is a feel-good story that even the most miserly sceptic would struggle to carp at. To see how far the league’s smallest club have come, you have to go way back beyond June – when the players and staff finally learned that Covid had not killed their promotion dream – to 2010.

Ten years prior to outclassing Notts County at Wembley to achieve promotion to League Tw0, part-time Town finished bottom of the Blue Square North table. The Sulphurites only avoided relegation to the Unibond League – now the Northern Premier League – by virtue of other clubs being in a worse state of financial ruin. This was a year after the entire squad had been transfer-listed because they refused to accept a reduction on what little money they were being paid to play.

The manager then: Simon Weaver. The former jobbing centre-back is now the league’s longest-serving manager, but at the time of that nadir, Weaver was in his first year as a boss having answered a job ad in The Non-League Paper. A decade on, with the help of his father, Weaver Jr has overseen a transformation almost without parallel.

The obvious charge to level at Weaver is nepotism. One way – perhaps the only way now – to achieve longevity as a manager is to be the son of the owner. But Simon was there before his father. It was the manager who reluctantly convinced the property magnate to invest in 2011 when former Leeds United chairman Bill Fotherby was barely keeping the lights on at Wetherby Road.

‘Proud to be Town’ is their motto now but back then and until quite recently, few outside the Weaver family would swear to it. For much of the first half of Weaver’s reign, the only occasion most locals really bothered to check in on the football club was when they reached the FA Cup second round in 2012/13. Without including the gate for that tie against Hastings United, they averaged 433 through the turnstiles that season – still double the average when Weaver took over – and a month after the cup game, only 99 showed up to watch Town play Corby Town.

For years, decades perhaps, the club played in Harrogate but shared no bond with the town. The team trained in various places a good distance along the M1 South, while the vast majority of Harrogatonians only knew the score if they bothered to look inside the back cover of the Harrogate Advertiser the following Friday. Elland Road was the obvious destination for football supporters in the town, while for many years, coaches have left Harrogate every Saturday morning heading off to Anfield, Old Trafford and Goodison Park. It’s not true to say that Harrogate isn’t a football town, but Town simply did not register on the radar for most fans in Yorkshire’s Golden Triangle.

The catalyst for change arrived via JCB in 2016 when Town dug up their playing surface and replaced it with a state-of-the-art artificial one. Three years prior to that, attempts had been made to level the pitch which previously had sloped down into one of the corners, while drainage more sophisticated than a groundsman’s fork was seemingly non-existent. A precedent was set then for playing home games away from Wetherby Road when it became necessary to borrow York City and Doncaster’s grounds because theirs too often was unplayable. Not that anyone in Harrogate noticed they had gone.

But the artificial surface brought hordes of locals to Wetherby Road for the first time. Initially not to watch a Town game; usually it would be to play themselves, with children and adults of all ages on the pitch whenever the team were not. For the first time, the club was willing and able to ingratiate itself in the community and the ground became Harrogate’s hub for football. Before long, hundreds of youngsters each week were turning up for coaching, all clad in club colours.

Almost overnight, the Town tuned in to its football club. When youngsters and their parents returned to Wetherby Road on a Saturday to see how the newly-turned-professionals did it, they enjoyed watching a team built in Weaver’s vision, one that liked to keep the ball on the floor, which previously was not possible whenever a Yorkshire winter set in.

Is that grass on the pitch we see? 🤩#ProudToBeTown pic.twitter.com/a8s59strp6

That pitch was down for four years from 2016, in which time Town enjoyed exponential growth. In 2017, the revenue enabled the squad to become professional. Promotions followed in 2018 and in August this year. Their journey from a part-time Conference North side to a professional Football League club should provide a template for everyone else, but instead it is Harrogate who must fall into line. How many EFL clubs beyond the Championship could use the revenue and community engagement that the artificial surface brought Town?

These are not the sandy, skin-stealing pitches that QPR, Luton, Oldham and Preston played on until the mid-1990s. The English game, and its clubs circling the drain, would gain far more from the Football League reversing its grass-only policy than whatever they think they would lose.

And no one could reasonably accuse Town of gaining a competitive advantage from the artificial pitch. Promotion campaigns cannot be built on home form alone and Weaver’s side have outclassed many an opponent on their own patch through their three-year rise from the National League North to the Football League. This is a Town team with more than one string to their bow. If they can play, they will. If they must fight, that’s fine too.

Weaver and his trusted assistant, ex-Sunderland and Carlisle midfielder Paul Thirlwell, have recruited smartly through their ascent to League Two, but the core of the squad which schooled Bradford City on Monday night remains very similar to that which earned the first promotion through the National League North play-offs in 2018. Six starters at Valley Parade, including goalscorer Lloyd Kerry, and nine of the matchday 17 were also involved in that 3-0 win over Brackley Town two years ago.

Josh Falkingham, man of the match in Town’s first EFL Yorkhire derby, was also there from the start of the professional era at Town. Weaver’s captain – a yappy, midfield dog who’ll win it and give it – leads and epitomises a Town team full of hungry lads desperate to prove themselves more with each rung of the ladder they climb. It is a theme running through their recruitment too – all aside from Jon Stead, the vastly-experienced former Premier League striker, have a point to prove. And Stead, who has seen more than most, rates last season’s promotion as the greatest achievement of his career.

The fact that Weaver is seeing each new level with eyes as fresh as his players seems to tie this group together tighter and the bond between the squad and its small staff is not one that can be implanted artificially overnight. There are many parallels between Town and Salford City – both clubs turned professional in the same summer and Salford won the race to the EFL by a year – but the Class of ’92’s huge budget can’t buy the stability that has brought Town to where they are. The Salford owners are currently looking for the fourth manager of their stewardship, not that there is anything fundamentally wrong with their approach, or the fact they were reportedly paying wages of £4,000 a week as a non-league club. After all, Harrogate’s climb has hardly been powered by good vibes alone – but Town have offered a refreshing reminder that it can be done a different way.

And they aren’t done yet. Off the pitch, Town have scrambled to prepare for their inaugural season as a league club. There was no time to tear up the artificial pitch so grass has gone over the top. Four different stands have been thrown up on three sides of the ground in just over a year which makes Wetherby Road a quirky, mish-mash of structures, but together they meet the minimum EFL requirements. A training base has been found for a year in Leeds, with their old one now covered in topsoil and turf.

On that pitch, though, Town look more than ready. Having only two weeks break in between seasons could be a blessing since they have looked sharper than most of their opponents, who were inactive for almost six months while Town waited for, and mounted, their play-off charge.

Perhaps it could prove to be a curse should fatigue creep in as the novelty subsides but for now, Town have taken to life as a League Two side with ease. Nothing unique there, since history tells us that teams promoted from the National League are never relegated in the following season. But Town’s achievement to get this far is a special one. If no other reason than, as Irving Weaver admits, the club ‘hasn’t had any previous glories’. The platform is set, though, for future triumphs, and with the town now on board, the picture looks brighter than Weavers Jr and Sr could have dreamed a decade ago.