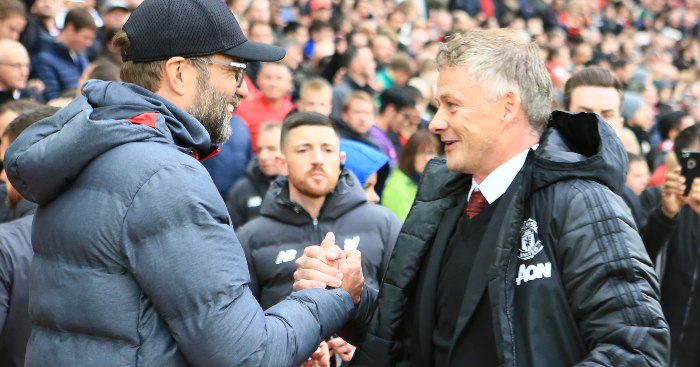 Manchester United can tonight end a wait of almost 40 months to return to the top-flight summit if they beat Burnley at Turf Moor. How long does their wait compare with their Premier League rivals?

20) Brighton – Never
The Seagulls have never soared to the summit. Their highest position since returning to the top flight in 2017 was fifth for a couple of weeks at the start of last season. They dabbled with seventh on three occasions in 1981/82.

18) Sheffield United – 17,995 days
The newly-promoted Blades won their first four games and went unbeaten for 10 matches while setting the early-season pace in 1971/72. They finished 10th.

17) Burnley – 17,302 days
Successive wins at the start of the 1972/73 season had the Clarets at the top of the table after a couple of years in the second tier. Despite going close in 2017/18, they haven’t since bettered their sixth-placed finish of that season.

15) Crystal Palace – 15,076 days
Terry Venables took Palace to the summit for the first and last time when they beat Sir Bobby Robson’s Ipswich Town in September 1979 as part of an eight-game unbeaten start. It couldn’t last – they won only one of their last 10 to finish 13th.

14) Leeds United – 6,715 days
It was El Tel who last had Leeds at the top of the table too. But United crashed hard after a couple of wins at the start of 2002/03 season, avoiding relegation to finish 15th under Peter Reid.

13) West Ham – 5,282 days
A win and a draw, coupled with the scheduling, had Alan Pardew’s Hammers leading the way for a single day at the start of 2006/07. A week later they signed Carlos Tevez and Javier Mascherano – then the whole thing went to sh*t.

12) Newcastle – 4,902 days
Sam Allardyce’s first game in charge of Newcastle had them top of the Premier League 161 months ago. They started the 2007/08 season brightly with two wins and two draws before becoming the only side all season to lose to Derby which precipitated a run of just five wins in 25 games, costing Big Sam his job.

10) Fulham – 3,067
A year after Villa flirted with the top spot, Martin Jol’s Fulham did the same courtesy of smashing five past Norwich on the opening day.

9) Manchester United – 887 days
Jose Mourinho’s side topped the table in 2018 only because they kicked off the Premier League season on the Friday night of opening weekend. Prior to that, they last surrendered top spot after four games in 2017/18 – 1,216 days ago – because of the alphabet, with United and City having identical records.

8) Chelsea – 845 days
Five wins at the start of Maurizio Sarri’s only season in charge had the Blues at the top of the league before a goalless draw at West Ham surrendered the initiative to Manchester City.

7) Manchester City – 516 days
Pep Guardiola hasn’t been at the top since just after the opening day at the start of last season when City smashed West Ham 5-0. Pep out.

6) Arsenal – 117 days
Mikel Arteta has had Arsenal top of the league this season. After the opening day and only because A comes before L for Leicester in the alphabet…

5) Everton – 75 days
Everton spent three matchdays in first before passing on the baton to Liverpool at the end of October in between consecutive defeats at Southampton and Newcastle.

4) Southampton – 67 days
Saints spent just less than 48 hours at the top in November – the first time in 32 years they had been so high.

3) Leicester – 54 days
The Foxes have been to the summit twice this term. They first relinquished top spot to Everton as a consequence of getting humped by West Ham in October. They then retained first place in time for the November international break before stepping aside for Tottenham.

2) Tottenham – 29 days
Spurs surrendered top spot to Liverpool when they lost at Anfield last month. Prior to Mourinho taking them to the summit, not since August 2014 had they been able to look down upon everyone else.