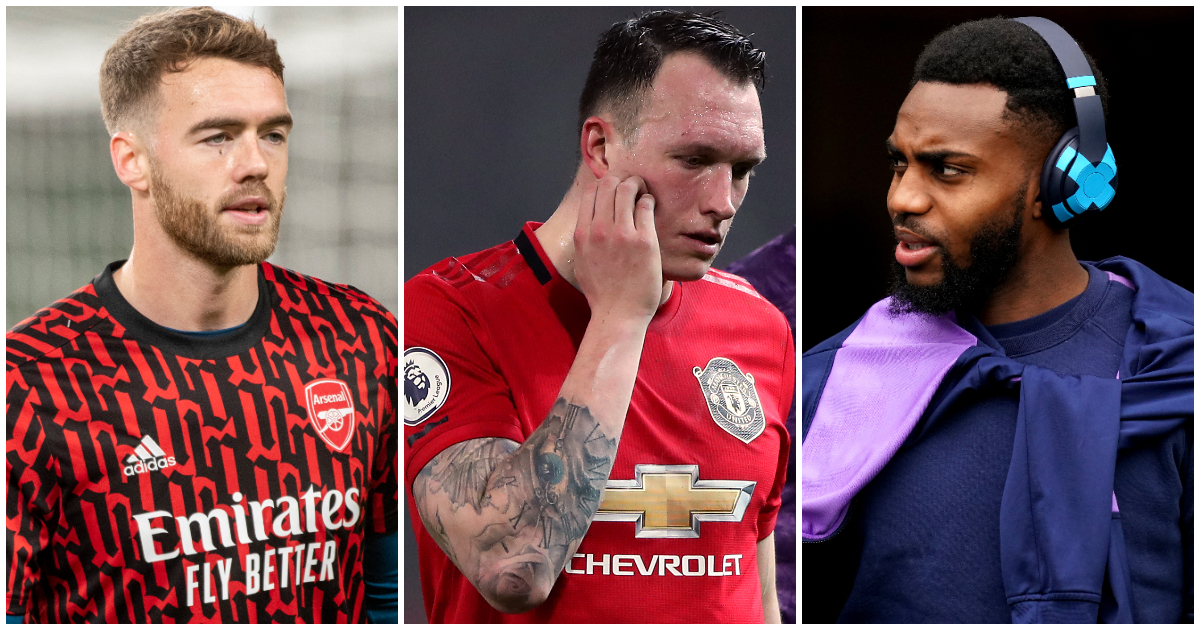 This side, admittedly in desperate need of a centre-forward, features a World Cup finalist and a few failed wonderkids…

Sergio Romero
The Manchester United goalkeeper has more Argentina caps than league appearances for any of his five clubs. At Old Trafford, he has gone from the game’s best stand-in to little more than a liability on the balance sheet. United could have got rid last summer and in January but with no one willing to pay for Romero, the 34-year-old is kicking his heels at Carrington, much to Mrs Romero’s chagrin.

Danny Rose
The Tottenham left-back said he couldn’t wait to retire, and the former England international is getting in some good practice while he waits for his Spurs contract to expire this summer. Though he has been maintaining some level of fitness out from under Jose Mourinho’s feet. “He has been working with the under-23s, playing sometimes with them and playing well the couple of times I watched him,” Mourinho said last month.  “He’s made a good contribution for the kids’ team and the kids’ development.”

Calum Chambers
“I am really happy with Calum,” said Mikel Arteta last month. Just not happy enough to play the thrice-capped England defender in the Premier League. But his time will surely come before long, with Chambers fully fit after a knee injury he sustained in Arteta’s first full game in charge.

Terence Kongolo
The Fulham defender joined the Cottagers permanently in a deal which could cost them £7million but so far, the Holland international with four caps, is yet to play in the Premier League, despite being available since the turn of the year. He looked to have a swell old time at his birthday party last week, though.

Michael Korbownik
The teenager, playing in this side on the opposite flank to his preferred position, made his Poland debut a day after signing for Brighton in October. Korbownik was immediately loaned back to Legia Warsaw but then recalled in the middle of January. Despite that, and a debut in the FA Cup, Graham Potter isn’t planning on chucking him into the Premier League just yet: “I was listening to something Sean Dyche was referencing about when you sign a player how long it can sometimes take,” Potter said a fortnight ago. “He was mentioning it with Dale Stephens and how it takes time to understand how the team is working. That’s from taking a 30-year-old guy from Manchester who has played four years in the Premier League.

“You consider that with a young player who has come from a different country, is still developing the language, still developing his understanding of football generally. It is not so easy.”

One per club: Players stuck after January transfer window shut

Phil Jones
Phillip Anthony Jones is United’s only remaining outfield player from the their last title triumph in 2013, but the 29-year-old hasn’t been seen in a red shirt since scoring at Tranmere in the FA Cup over a year ago. Injuries, of course, have killed Jones’ United career but even when he is fully fit, the versatile England international – playing here in the Duncan Edwards role – is unlikely to be seen in the Premier League this term, despite Ole Gunnar Solskjaer’s struggles at centre-back.

Jean-Philipe Gbamin
We didn’t want to include any player in this side who has been unavailable only because of injury, but we felt it necessary a) to remind you of Gbamin’s existence; and b) because we needed an 11th man. Gbamin is close to being in contention for an Everton place having played only 135 minutes since arriving from Mainz in 2019. The Ivory Coast international was signed to replace Idrissa Gueye and his absence was keenly felt before Carlo Ancelotti revamped Everton’s midfield in the summer.

Jack Rodwell
The former England international is back to being the forgotten man. Having begun to restore his tattered reputation with a productive spell at Blackburn after sitting on his £70,000-a-week arse at Sunderland, Rodwell hasn’t been seen in a Sheffield United team since July. He made the bench in the FA Cup, but even in this Blades side, he can’t get a sniff. Which we suspect isn’t keeping him awake at night.

Ben Woodburn
The Wales midfielder, who scored on his international debut as a 17-year-old in 2017, became Liverpool’s youngest goalscorer in 2016 but Woodburn has failed to maintain his rapid ascent. He is currently back at Anfield, after being returned by Blackpool, with little prospect of any action this season. Woodburn still has a year and a half remaining on a five-year deal signed when he was the next big thing.

Henri Saivet
“Well, there’s only him or Saivet to choose from so it was pretty straightforward,” said Steve Bruce when he was discussing Christian Atsu replacing DeAndre Yedlin in Newcastle’s Premier League squad. Which tells you all you need to know about Saivet’s standing at St James’ Park. The midfielder hasn’t played a Premier League game in three years, in which time the Senegal international has been picking up £30,000 a week.

Jose Izquierdo
The Brighton attacker hasn’t been seen in the first team since April 2019 but injury isn’t the only concern for the Seagulls. Apparently, Brighton would be liable for bonus payments owed to Club Brugge if Izquierdo makes 50 appearances. The Colombia international currently sits on 47, so it seems likely that he’ll remain on the sidelines until his contract expires in summer.