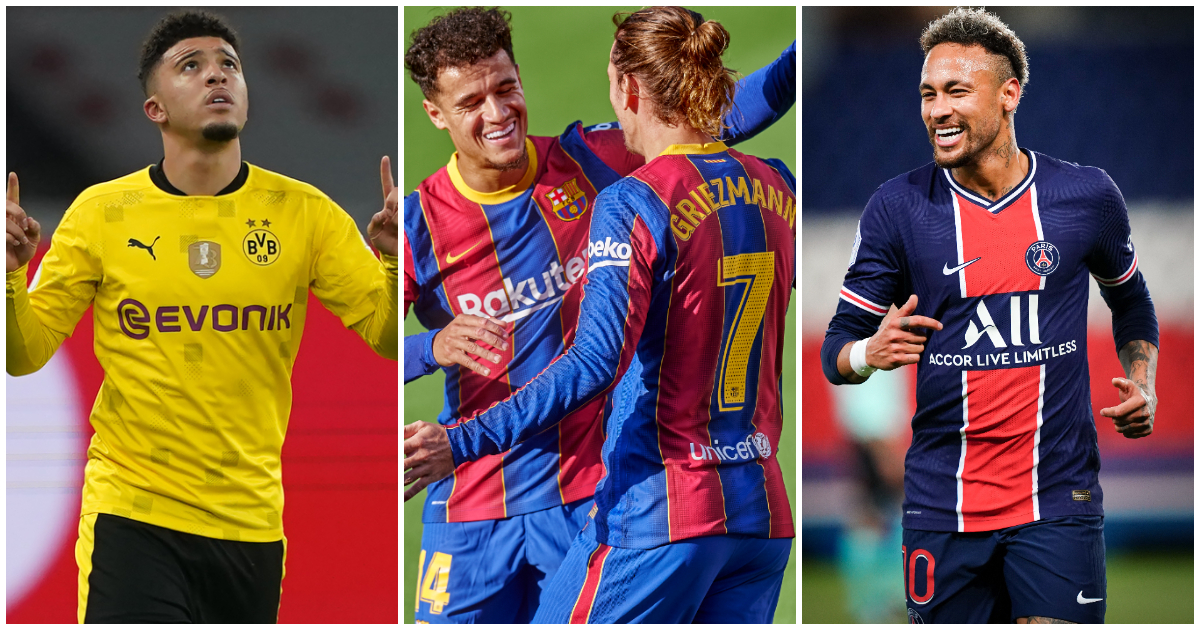 Transfers ahoy. Here are the ten players bought and sold for the biggest profit. Includes only players for whom a fee was paid before being sold on. No freebies. Jadon Sancho squeezes Virgil van Dijk out of the ten…

10) Nicolas Pepe – £63million
The deal might have been structured so that Lille get £3.23 a week like one of those catalogue schemes of the 1980s but the bottom line is that Lille paid £9million to Angers in 2017 and then sold the same player for a book price of £72million to Arsenal two years later. That is excellent business.

It is particularly excellent business as that Arsenal investment has not yet paid dividends for the Gunners. In fact, a year later, Arsenal launched an investigation into their own dealings having realised they perhaps paid way, way too much.

9) Jadon Sancho – £64.9million
Dortmund have done it again. The Germans signed Sancho from Manchester City for a fee in the region of £8million to replace Ousmane Dembele, who had joined Barcelona. More on that later.

With United set to pay £72.9million for the England winger, that represents another very tidy profit for Dortmund, even if they have to funnel around £10million off to City due to a sell-on clause the champions insisted upon to allow Sancho to leave as a 17-year-old in 2017.

8) Cristiano Ronaldo – £67.76million
Few had heard of the 17-year-old when he joined United for £12.24million – half their windfall from selling David Beckham – in 2003 but six years at United turned Ronaldo into arguably the world’s best player.

Given Ronaldo’s desire to join Real, which he had made absolutely clear 12 months previously, the deal came as no surprise when it was announced. More shocking was how reluctant United were to reinvest the £80million. Sir Alex Ferguson’s four signings the summer he sold Ronaldo: Antonio Valencia, Gabriel Obertan, Michael Owen and Mame Biram Diouf.

They haven’t really made a proper profit on a player since.

7) Harry Maguire – £68million
To turn a £12million defender into an £80million world-record-breaking centre-half in two years was quite the trick for Leicester. One they have become quite adept at. They made £45million on academy graduate Ben Chilwell and could make big profits on other stars such as Youri Tielemans, James Maddison and Caglar Soyuncu should they decide to cash in.

There’s no doubt that Maguire has significantly improved Manchester United. He’s one of the all-too-few successes among United’s ten record signings.

6) Gareth Bale – £75million
The Wales star turned himself from a player on the verge of a loan move to the Championship into the world’s most expensive ever in 2013 when Real Madrid agreed to pay Spurs £85million.

That status, though, offered little protection at the Bernabeu, where Bale really is no longer welcome. Still, returning there after his loan stint back at Spurs won’t bother the former Saint as long as they continue to pay him £600,000 a week for the last year of his contract.

5) Antoine Griezmann – £83.6million
Atletico Madrid insisted that they deserved more than the £107million they were paid by Barca as the Catalan giants met his buy-out clause. That still represented a whopping profit. And Barcelona might be lucky to recoup half that money now.

In Griezmann’s defence, multiple Barca managers have failed to define his role and he has been shifted around their attack. And Didier Deschamps loves him. “He’s one of the greatest players of all time both in Europe and worldwide,” said the France boss after Griezmann impressed during the Euros group stage. That didn’t stop him pulling the forward off for Moussa Sissoko in the defeat to Switzerland.

4) Eden Hazard – £111million
The Real Madrid winger was waved off by Chelsea with their warmest wishes – and not just because of the massive wedge the Blues made on their star player signed from Lille for £32million in 2012.

We still don’t know for certain what Real’s final bill will total, with huge add-ons potentially payable in addition to the £89million Chelsea were guaranteed. But when Hazard’s former club Tubize went to court to claim their cut which they valued at around £700,000, they produced documents which suggested Real had agreed to pay £143million.

3) Ousmane Dembele – £123.8million
Dortmund have doubled up as a money-making machine in recent years, making huge sums on Pierre-Emerick Aubameyang, Christian Pulisic and now Sancho. Though none were as big or as quick as the profit made by the sale of Dembele to Barca.

Barca could hardly plead poverty in the wake of selling Neymar in 2017 so Dortmund drove a hard bargain for Dembele, who joined the club only a year before from Rennes for around £11.7million. Dortmund coined in £96.8million initially with a series of easily-attainable add-ons taking the cost to £135.5million, though a fair chunk of that profit will go to Rennes, who stand to make around £34million from the 25 per cent sell-on clause they inserted as part of his exit deal.

He is currently available for about £4.27 – which is £4.27 more than Barca will make if Dembele continues to refuse the offer of a new contract before his current terms expire in a year.

2) Neymar – £128.5million
Having initially agitated for a move away from PSG, the Brazilian wound in his neck after it dawned on him that no other club in the world has the will or means to pay him what he gets in Paris, especially post-Covid.

He employed similar tactics to get out of Barca in 2017 when the Catalans paid a world-record £200million fee. That palaver came four years after Barca had won the race to sign Neymar from Santos. Barca claimed the deal was worth £48.6million – but it also cost Sandro Rosell his job. The Barca president’s successor divulged the full amount: £71.5million, which included a £35million payment to Neymar’s dad.

1) Philippe Coutinho – £133.5million
Rafa Benitez’s recommendation reportedly convinced Liverpool to pay Inter Milan £8.5million for the Brazil playmaker in January 2013. Yet another reason the Reds have to be grateful to the new Everton manager.

Upon Benitez being proved right, Liverpool really didn’t want to sell Coutinho and they certainly made the player and Barca work for a deal. It was finally agreed in January 2018, when Barca agreed a move which was worth up to £142million. The Liverpool Echo reported last December that the Reds had banked the full amount.

No wonder Barca are broke.