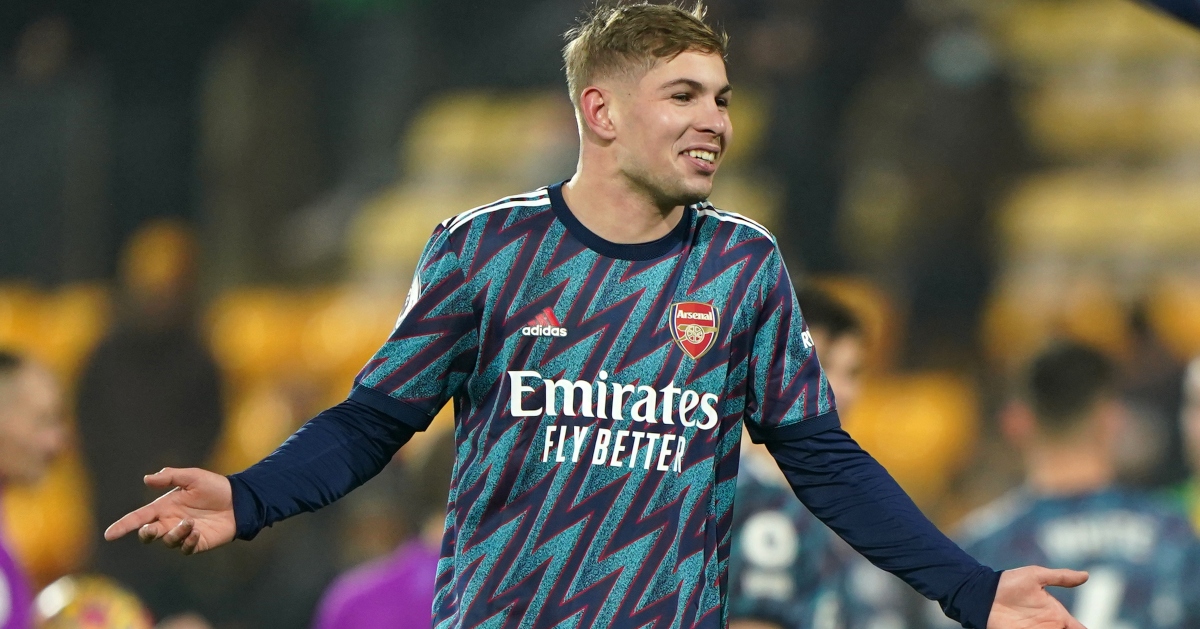 Johnny Nic is getting his kicks from watching Emile Smith Rowe flourish in Arsenal’s first team. The young Gunner is the latest subject in our ‘What’s So Great About…’ series…

Who’s this then?
Emile Smith Rowe is just 21 and is one of those annoyingly young people who were born in the 21st century. A six-footer, he was born in Croydon and currently plays for Arsenal and England.

He was signed in 2010, aged just 10 by Arsenal for their Hale End Academy, signing professional forms in 2017 and a longer contract in 2018, making his first-team debut on September 20, 2018 against Vorskla Poltava in the Europa League.

Long considered to be a good prospect, he notched his first two goals in Europe and one in the League Cup in 2018-19 before being sent out to RB Leipzig on loan to get some experience under the tutelage of Ralf Rangnick. However, he turned up knacked and only managed 28 minutes of football in three substitute appearances.

So he returned to Arsenal for the first half of 2019-20 season, making six appearances, before being loaned out again, this time to Huddersfield who were bossed by Danny Cowley at the time. I think this period marks the moment that he started to really make a big impression. A big hit with Terriers fans he scored a late goal in their final home game of the season to help secure their Championship status.

His performance in Yorkshire impressed Arsenal enough to begin to play him regularly the next season. He played 20 top-flight games in 2019-20 and 33 in total, scoring four times. This season he’s played in almost every game in the league, on top of that he’s had his first England call-ups, playing twice and scoring against San Marino in an especially eager, almost puppy-dog performance. This after he’d won the FIFA U-17 World Cup with England.

This season, everything is coming up Emile, with 10 goals in 25 games and some man-of-the-match performances. His game seems to have gone up a couple of notches. He’s now so embedded into the Arsenal first-team that it is hard to imagine them playing without him and how he plays is integral to how the team functions. Now that is a player on the up.

Why the love?
In the turbulent first third of the season where it looked like manager Mikel Arteta might get the sack following some woeful and disjointed performances, it seemed to fall to the youngest players in the first-team to really pull them through. There was a moment in the early winter where it really seemed like Smith Rowe and some of his other 20 or 21-year-old team-mates took the responsibility for the team’s performances on their shoulders. Trusting in youth has really paid off for Arteta and now the club seems set to finish in the top four, largely off the back of those youngsters’ performances.

Emile is a fan-favourite for several reasons. First, he’s a product of their own academy and there isn’t a fan worth their vinegar who doesn’t love a youth team player breaking into the first team. It is one of football’s best traditions and those who seek to replace it with simply buying in talent are philistines. It also means they can see him develop as a player from a raw youngster into an international class performer.

He certainly seems to have taken responsibility on his shoulders very naturally. And he’s one of those all-action, socks-rolled-down players who most fans adore. Watching him, what strikes me is he’s constantly on the move. He’s got an energetic style which gives the impression of industry and commitment all of the time. He dashes rather than runs, if you know what I mean. I love that.

Also, being just 21, he’s got the fearlessness of youth that is always exciting. A front-foot player, he’s not afraid to take the opposition on and beat them. I love that too. Caution is overrated, better to throw all your shit at them and if you go down in flames, so be it. At least you gave everything.

There’s nothing cautious about how he plays at all. For older readers, he reminds me a lot of Alan Hudson in his prime for Chelsea and Stoke, though Hudson was a No.8 and Smith Rowe is a much harder worker. But he’s got all that creativity married with incisive off-the-ball running and a genuine goal threat. He works on the right most of the time but is good on the left too. In fact, he seems an adaptable sort of player who brings his qualities to any role you tell him to play.

He could easily play as an out-and-out striker but that would likely suppress his vision as a passer and the team would lose his explosive pace from the middle third and with the fashion for striker-less formations proving to be successful, the progressive attacking midfielder may never have been more hip, or more essential.

Jamie Carragher has called him the best in the league at running with the ball. He’s certainly got good close control and even though he looks barely old enough to start shaving, he’s a strong boy and is prepared to use it. Even though he doesn’t look six foot tall he has the sort of powerful chunky legs that will seem him out-pace many defenders.

He’s got a very tight turning circle which gets him out of close encounters and plays with an innate directness. There is a distinct lack of fannying around about how he plays football which comes as a relief for anyone who likes direct, threatening football and would take it over the possession-based approach to the game, any day of the week.

– Quicker with the ball than without it, whenever he gets it he bursts into life. Reminds me of Merson when he dribbles and Ljungberg when he makes his runs. Honestly think his impact for Arteta shouldn’t be understated – might’ve saved his job last season.

– Scroll to 1.15 here to see the type of thing he injected into the Arsenal team it was so badly lacking before him. Socks down, smile on, academy kid who said scoring v Spurs was the best day of his life. I absolutely love him.

– Quick, an eye for a pass, really good at running at defenders, can use both feet, seems to have found his shooting boots this season. On top of that, a really humble, likeable guy and a model pro. So glad he’s ours!

League’s best low-socks player. He’s this enticing mix of Alex Hleb and Thomas Rosicky. Extremely mid-Wenger years vibes, and an academy graduate too. Is it any wonder we love him so much?

– I’ve had “Saka and Emile Smith Rowe” to Status Quo’s “Rockin’ All Over The World” stuck in my head for the last six months now. I need help!

– Carries the ball like Ozil, and fully worthy of the Tyler-branded epithet.

– Throwback to an early days Merson too, so there’s something for all the generations.

– I think the cross generational thing is an astute observation. I could see him ploughing through a muddy field, dribbling past people on a cow patch in the 70s. Could also see him Brylcreemed to the gills with a Hamlet on the go and red and white knickerbockers in the 30s.

– His finishing! Stats wise he has +5.2 goal over performance from xG, leading everyone else in the league. His conversion rate is currently 31% which is quite frankly insane. Surprised Arteta hasn’t played him as a false 9 yet like Pep would.

– Let’s be real, there’s just something about a fearless attacking midfielder in low socks that ignites a warm feeling of excitement. Maybe he’ll go on to be a worldie, maybe he’ll peter out, but right now he’s clearly having so much fun and it’s infectious.

A tremendous performance for the England Under-21s…

Future days
He recently signed a five-year deal at the Emirates, declaring he’d love to play his entire career at Arsenal. With the club looking on the up again, why would he go anywhere else? Handed the no.10 shirt and now a first team regular and an England pick, he’s ready to lead the drive for the next great iteration of Arsenal.

He’s not short of international competition as an offensive wide midfielder in a ridiculously strong national side, but as he’s already netted 10 times in 25 games for Arsenal this season, that’s the sort of goalscoring form that Gareth Southgate will not ignore for long.

There is a unique delight in seeing a player improve every season, especially one that is so rapidly becoming an important force for club and soon for country too. It will be really interesting to see how his game develops under Arteta.

In many ways, ESR is an old-fashioned footballer, great on the ball, plays with his socks down, always looking to get it forward at pace and not afraid to use his physicality to hold off a defender.  Arsenal have got themselves a fantastic young player, one of the best young players in the country and it’s a real thrill to see him play.