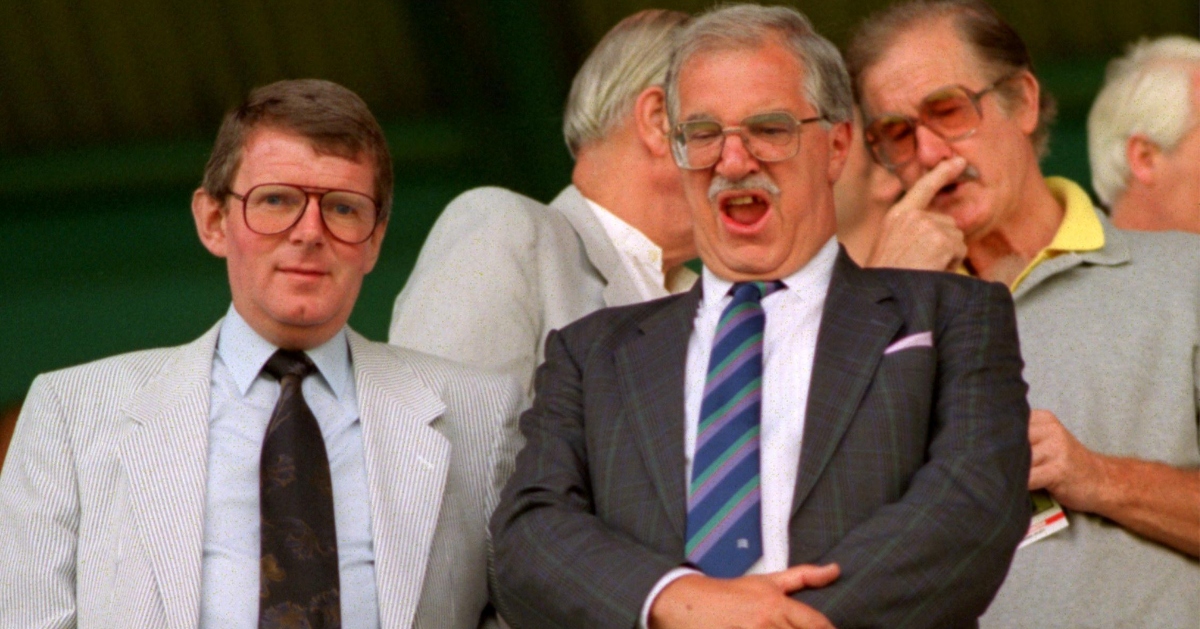 Gerald Sinstadt died this week at the grand old age of 91. For more than 40 of those years he was one of the most distinctive and much-loved commentators, sport broadcasters and football voices.

Getting his start in British Forces Broadcasting Service, helped by a young Barry Davies along the way, his first work was for Anglia TV, his commentating debut was on a Grimsby Town v Leyton Orient game. Ah the glamour.

By the late 60s he had moved to the north-west and was working on Granada. It might be worth explaining to younger folk that every region had its own ITV station and would exclusively show its region’s football. The homogeneity that is the norm today was rejected in favour of a more local approach to broadcasting, especially of sport. It was reasoned that if you lived on, say, Teesside, your primary interest would be in North-East sides, not clubs from anywhere else. While this was largely true, it was very frustrating that we couldn’t see other region’s programmes. Granada’s always seemed way more glamorous than ours on Tyne Tees, the Big Match from LWT, even more so.

So by the early 70s, Gerald’s voice was very familiar if you lived in Manchester and the wider north-west area. He commentated on games – famously being on the mic when Denis Law brilliantly back-heeled a goal for Manchester City that relegated Manchester United – and presented the preview show on Friday nights.

Rest In Peace, Gerald Sinstadt. An absolute master of his craft. pic.twitter.com/pt40L2QJE3

This might not sound much in today’s days of football broadcasting overload, but a preview show dedicated to football was a new invention in 1969 and those of us who didn’t live in the north-west and didn’t have such a show to watch were very jealous indeed.

Although in the 1970s he was only in his 40s, he always seemed a bit older. Yet when older, he seemed a bit younger. Forever 55, perhaps. While how we view people changes as we age, Gerald was always definitely an adult. By which I mean, he was from the generation that didn’t indulge the arrested development or kidult tendencies that have become more commonplace in the 21st century. The sort of calm-under-fire chap who you want with you in the trenches. It was that level-headed, thoughtful aspect to his character that came to the fore that fateful day at Hillborough where he delivered reports to camera as the terrible events unfolded, able to hone his words calmly, concisely and effectively. Later he appeared in Jimmy McGovern’s docu-drama of that awful day.

The north-west being one of the country’s epicentres of football meant he became very high profile, so when he decried the racist booing of WBA’s black players, it was an important moment. It also reminds us that life was not an amoral desert in the 70s and 80s, some did know right from wrong and were prepared to make a stand.

He was one of the first commentators to call out racist abuse heard here during West Brom’s 5-3 win at Man United in 1978. pic.twitter.com/MtyYoLHHqK

He commentated on Liverpool’s victory over St Etienne in the European Cup, a night that lives long in Liverpool legend with super sub David Fairclough racing through to score the winner. It still stirs the blood. My god, yes it does. “Super sub strikes again!”

Your commentaries will forever echo at Anfield. pic.twitter.com/0dtEJvwzfe

He worked at four World Cups, was a European football regular and though notionally behind Brian Moore in the ITV commentary pecking order, his name was a guarantee of quality.

When he left Granada in 1980 he was replaced by some bloke called Martin Tyler.

By the mid-80s he was back working for the BBC covering several sports as well as reporting for Football Focus and Match of The Day.

Even into his 70s he was calling in reports for Final Score and writing a column for his local Staffordshire newspaper.

Those are the basic facts but they say little for how loved he was and also what a great commentator he was. His voice had a crisp, dry tone to it that lent itself to authority. He would refer to some players by their first names on occasions – the Denis Law clip is a classic for that – “and Denis has done it” – but he was never overly familiar, never too chatty or informal. In fact, watching any clips again, it is remarkable how few words he did actually use, letting the action do the talking; always a sign of a great commentator.

So sad. A very kind, sensitive and talented man. One of the gentlemen of our profession. https://t.co/hHsZTbfqe9

He was at the forefront of the development of the art of commentary. We tend to take it very much for granted now. There are techniques that many deploy, everyone is of a standard. But everyone walks the road that the likes of Gerald cut in the first place. It is a profession you can aspire to work in now. But back in the early 1970s it was all still relatively new and people like Gerald were setting the standards and carving out a route for others to follow. There was also little live football on TV so when there was – World Cups, big European Wednesday nights, cup football, it was very special. Unless you lived in that era, it is hard to convey exactly how big and how special.

There is an argument that there is far, far too much football on television and this has led to us all feeling blasé about it, feeling replete and stuffed to the brim with live games for most of the year. However, when the live game was a rarity, it had real status in your life. You would look forward to it, everyone talked about it. This is why people remember World Cups and big European games so vividly to this day and Gerald was there so much and so often that we perhaps don’t always remember that we experienced those momentous football moments often through his commentary.

He was the master of the goals round-up, voicing over the package of several games, a few words for each

Sad news about the death of Gerald Sinstadt, who enjoyed a long broadcasting career covering football for ITV and then the BBC.

At the BBC Gerald regularly voiced the goals round-ups on Match of the Day and here he is doing that on FA Cup first round day in November 1989.#RIP pic.twitter.com/cbGbzZiati

But he wasn’t just a football man, he loved opera and initially left the commentary business to voice opera videos. By common assent he was a kindly fellow, always quick with a laugh.

Ninety-one years is a damn good innings and he really made his mark. His voice will forever echo down the vista of all our football years, indelibly inking so many brilliant moments of football in our synapses. He was part of the warp and weft of our football lives, so much so that perhaps we took him for granted, but in a way, that was the ultimate compliment. He didn’t get in the way, he just enhanced.

Travel well, Gerald. You were admired and loved by millions and thank you for all those games of glory and heartbreak.