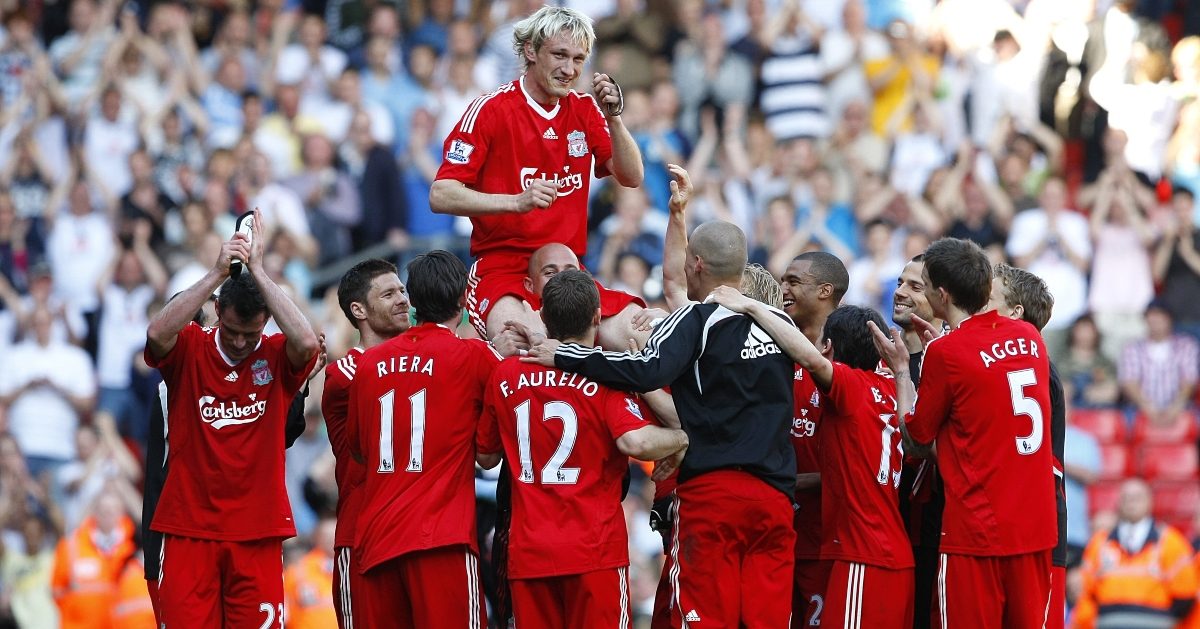 Have Liverpool put £2.5million to better use this century? John Nicholson pays tribute to the Finnish colossus who became a legend at Anfield.

Who’s this then?
Sami Tuomas Hyypiä is now 47 years old. Born in Porvoo, Finland, he was a 6ft 4ins centre-half who featured for six clubs in total: PaPe, Kumu, MyPa, Willem II, Liverpool and Bayer Leverkusen, playing 752 club games in total. On top of this he played for his country 105 times over 18 years.

His breakthrough came at MyPa in the top Finnish division. He joined them in 1992, playing alongside that too often unheralded genius Jari Litmanen. Playing 96 games across three seasons, his performances were good enough to attract the attention of Kevin Keegan, who gave the 22-year-old a trial at Newcastle United in 1995.

But it was to the Eredivisie that he was bound with Willem II. With him at the back for four years, the club rose up the league, finishing fifth in his third year and runners-up in his last in 1999. This qualified them for the Champions League, an amazing feat that they will likely never reproduce again.

Now 26, this is the point at which Liverpool came in for him, paying £2.5million for his services. Although unknown in the UK, Sami was a Liverpool fan and he began a legendary career at the club that lasted ten years, 464 games and 35 goals.

In the 2000/01 season the club won a remarkable unique treble of the FA Cup, League Cup and UEFA Cup with our man playing 58 games. Add in the Super Cup and Community Shield and Gerard Houllier’s men grabbed five cups that campaign. This remains a very underplayed achievement.

He struck up a partnership with Stephane Henchoz and then Jamie Carragher. That partnership saw them to the legendary 2004/05 Champions League win.

With one red card and 16 yellows, he had a great disciplinary record for a tough, uncompromising defender. He chipped in with 35 goals, too. After an emotional farewell at Anfield he went to Bayer Leverkusen for two seasons and then hung up his boots.

Taking up a coaching role alongside Sascha Lewandowski at Leverkusen they finished third, and then under Hyypia alone fourth. This got him the sack. Seems harsh.

He turned up at Brighton in 2014 but lasted only six months, winning six out of 26 before resigning. Brighton fans recall it as a poor period and that he was basically no good. It happens. He gave it a go at FC Zürich but was sacked after a season which saw the club relegated – though he did get them to a cup final which they won, albeit after he was offski. Ooops.

That was 2016. In 2020 he went in at FC Haka as assistant manager but left after just three months.

Why the love?
He is absolutely a Liverpool and Finland legend. That the club was so successful the season after he arrived helped cement him in place as the rock upon which the Reds’ success in this era was built.

There is something about him that simply looks very defender-ish. You can’t imagine him anywhere else on the pitch can you? His angular head looks like it is carved out of granite and ice. It looks like, if you ran into him, it would really, really hurt. His running gait was angular and rolling in a decidedly non-athletic sort of way.

Do we see defenders like him any more? Not really. Men who just want to head, block, tackle and harry and are not really interested in anything more fancy than that seem in short supply now.

At best there is a nobility in great defending which involves courage and grit as much as it does football skill. The desire and ability to stick your head where no sensible person would stick their head is, or perhaps was, an essential quality for a top defender and we loved them for it.

Today, the ball-playing defender seems more revered but that was never going to be Sami’s game. That said, he did pitch in with a few goals, getting that angular head onto a few corners and burying a few volleys.

However, to describe him as physical or intimidating would be to do him a disservice. This was no mere hooligan; the fact he only got one red card in his whole career and rarely suffered significant injury suggests his was a well-timed art rather than randomly battering people.

He also worked really well as a pair with Henchoz and then Carragher, latterly helping to bring the likes of Martin Skrtel and Daniel Agger through, though neither quite lived up to the standards he had set.

Finland was and to an extent still is something of a football backwater so internationally he achieved little but had he been from a bigger nation he would surely have won major honours at international level. For a few years he was one of the best defenders on the planet.

Also having two y’s together in your surname is very rare and very cool… even if people are still not sure how to pronounce it.

Liverpool had been weak in the air defensively for years before his arrival. I remember seeing him for the first time in a pre-season friendly and he won every header and stood out a mile.

This is a reminder of how good he really was…

What the people say
Being a defender is very much the difficult jazz compared to striking’s pop hits. You need a certain sort of mind shape to really appreciate central defending. To those who don’t get it, at least in Sami’s time, all they see is a big fella jumping and heading the ball or blocking a shot. It doesn’t look much compared to a striker cutting in and battering the ball into the top corner.

However, it is nonetheless an artform all in itself and the irony is if you’re really good at it, you get noticed even less, because you make everything you do look really easy.  However, many Liverpool fans well remember their captain and all round superhero…

– The closest I’ve seen to Tony Adams since Tony Adams. He even had the slightly androgynous quality about him. Hands on hips, a slightly awkward gait as he ran. Squint and they could have been the same person.

– He joined as a relative unknown and left as a legend. Also love how he handled the captaincy being handed over to Stevie, showed a lot of class throughout his time with us. Great player!

– He went 87 matches in a row without a booking across 2000 and 2001 including all the treble season. Ron Yeats’ favourite signing as a scout. I made a pilgrimage to Willem II’s ground during Euro 2000 such had been his impact. The Kop loved him. Oh Sami, Sami …

Defensively, as transformative a signing for Liverpool as Virgil van Dijk. A brilliant centre-back – commanding & consistent – who was key to two great LFC sides; the 2001 treble winners and the 2005 Champions League winners. I love him & if I ever have a son I’m naming him Sami.

– I’m a Liverpool fan who used to have his name as a password for stuff. And I’m still not 100% sure how it’s pronounced

– Our Finnish colossus. Oozed class and calm. Refused to bullied by big strikers and capable of mixing it when he needed to. Abiding images – lifting those cups in 2001 and that volley against Juventus.

Future days
His absence from high-profile football for the last five years is an odd aberration as he obviously wanted to be involved in the game, having spent his first five years after retiring in various coaching roles. Maybe the Brighton experience really scarred him but he did well in Germany and every managerial career involves more downs than ups.

But he’s still only 47 so there must be other opportunities for him to try. He’s yet to really settle into a long-term post-playing career and while he may not have any financial need to do so, you’ve got to pass your days somehow, haven’t you?

I wonder if some players find the game has moved on and think it has no need for the skills he picked up in his career any more, robbing him of an opportunity to use them in coaching.

For a player that not so long ago was a stone cold legend at one of the world’s biggest and greatest football clubs, to slip back behind the curtain of anonymity would be unusual and even a bit of a shame. But then, not everyone wants to spend their time in TV studios and commentary boxes and that’s understandable enough.