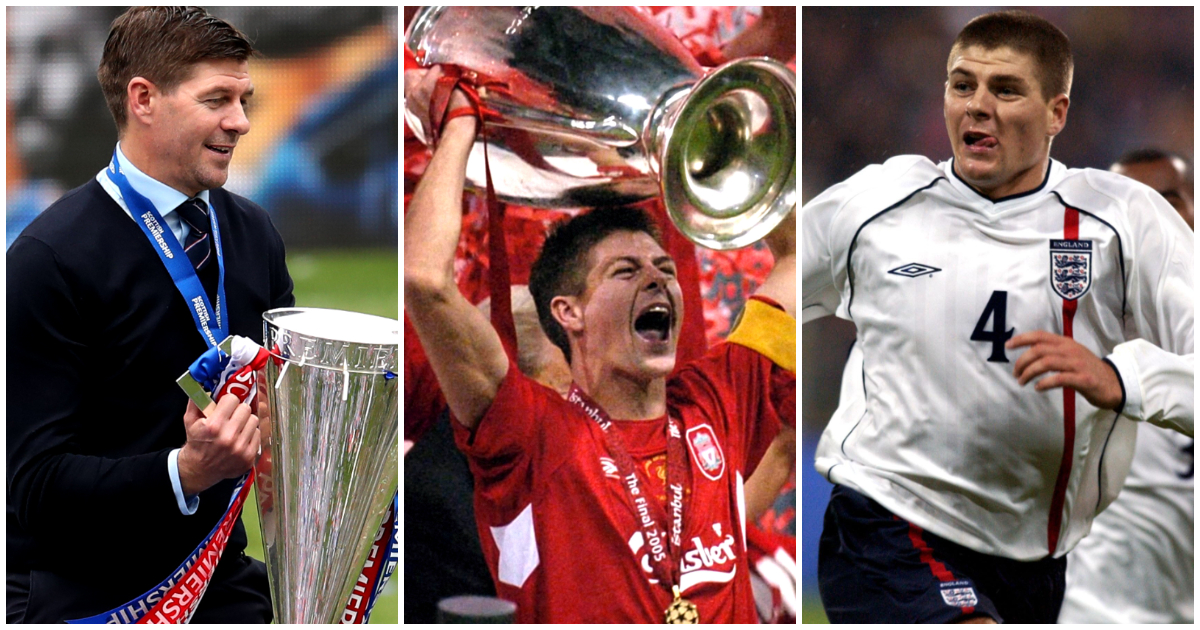 Ahead of his first game as a Premier League manager, Johnny Nic asks what’s so great about Liverpool legend and Aston Villa boss Steven Gerrard.

Who’s this then?
Steven George Gerrard is a 6’1” Whiston-born 41-year-old who is about to take on his first managerial job in England with Aston Villa after a stellar career as a player for Liverpool.

He made his debut in 1998 and subsequently played 710 games for the Reds, scoring 185 times in a 16-year playing career which saw him win two FA Cups, three League Cups, a Champions League, a UEFA Cup and a Super Cup.

He finished his playing career at LA Galaxy for two campaigns. After working in the youth set-up for Liverpool, he then took the Rangers job, winning the league title last season, going the whole campaign unbeaten and preventing Celtic winning 10 titles in a row.

He was capped 114 times for England, scoring 21 goals. For the first 10 seasons of the 2000s he never played fewer than 43 games per season, playing over 50 games in five of them. 2008-09 was his best goal scoring season, netting 24 times. Not bad for someone who is at least notionally a midfielder.

These are the bald facts about Gerrard’s career but they do not go far in explaining his almost mythological status in English football which saw him dominate the domestic game.

Why the love?
While he had a last pay day at LA Galaxy, Gerrard was basically a one-club man, a notion which seems quaint and old fashioned even now. Made captain of Liverpool in 2003, he often seemed to be pulling the team through games by sheer force of his own character. A deep worry line was etched on his forehead even in his 20s, presumably from the stress this placed on him. Indeed, he seems in general to be a serious sort of person, one that laughter doesn’t quite naturally fit as an expression. When you picture him, it is with a heavy frown.

He was a scorer of dramatic goals and important goals in dramatic and important games. Those long legs with a big stride latching onto a ball 25 yards out and crashing it into the Kop end goal was what rightly made his reputation.

Unlike any other player at any other club he became somehow the embodiment of the team, the organisation, the city even. Even his name, be it first name, surname or just “Stevie G” seemed to only find its fullest expression in a scouse accent, so symbiotic with the place was he.

Almost larger than life, this must have brought contradictions into his life. Expected to be down to earth, ordinary man of the people, and yet living an extraordinary life is a hard role for anyone to play. For everyone who wants to shake your hand in the streets, another wants to play the big man and have a pop at you. No doubt this was behind the legal trouble he had due to a fight in a bar. Stevie was exonerated after he went to court to prove it was all in self-defence.

There was always something quintessentially Liverpool about Stevie and not just the chewy accent. It is easy to imagine in him Shankly’s side, easy to see him in Paisley or Fagan’s or Dalglish’s too. I can’t really explain this but to see him in his pomp at Liverpool there was a direct connection to their past. He rose out of that culture organically, rather than being imposed upon it, if that makes any sense.

He was sometimes criticised for trying to play too many Hollywood balls. Indeed, the first time I heard that term it was in relation to his predilection for firing off 50 yard diags, sometimes accurately, sometimes not. But that was unfair. It was his job to put petrol in the side’s tank, to make things happen and you can’t do that by playing conservatively and not taking chances. And he did ping some amazing long balls.

It should also be said that he was incredibly adaptable, playing right back when needed, playing as striker, a right winger and all across the midfield in many different formations.

In his time at Anfield he played in a couple of good sides but also in some decidedly not great sides. Even the 2005 Champions League winning side couldn’t be called great in terms of ability. But this is the remarkable thing about Gerrard’s career and his influence. He somehow brought a spirit and determination to proceedings that dragged others nearer to his standard.

Late long range strikes became a trademark and there is little better to endear you to fans. It should also be said that his art was one easily appreciated from the distance of the terraces. Taller than some imagine, those long legs ate up ground. That roar of anticipation that went up as a ball went loose 30 yards out, as he ran onto it, was not for no reason. Those hits are his defining image.

That’s not to say he was shy in the tackle. Loved a good two-footer did Stevie, and wasn’t afraid of a physical challenge which is how he was memorably sent off with 38 seconds of coming on against Manchester United in 2015.

For a while, everything he did seemed to be The Thing Everyone Remembered. From ‘What a hit, son!’ to the stumble against Chelsea that proved fatal to their title-winning chances, it was all Stevie, all the time. Even his distinctive arm-pumping goal celebration seemed to be omnipresent.

Like many of his generation, his England career never matched his club form. When it came to playing for his country, the golden generation was made of brass, but so dominant at club level was he, international failure didn’t seem to damage his reputation.

Chelsea tried and almost succeeded in luring him away, but it was always impossible to imagine him in blue and not red. That winning with Liverpool meant so much more than winning with anyone else would have, putting the hometown club before greater riches and trophies, is the number one way to endear yourself to the fans and to enshrine your legend, going, as it does, against the prevailing trend of seeking ever more money and honours no matter what.

Four great moments
Hello, hello, the comeback is on…

This would become a defining image of the man…

His first goal for Liverpool set a high standard…

– Was the best player in the league for a spell. Would have been the best player in most teams in any position he was asked to play. Debates around Gerrard/Lampard/Scholes are tiresome mostly because they miss that Gerrard could easily be in debates with Keane/Vieira & KDB/Silva

– Arguably the greatest Liverpool player post-1990 and pre-Klopp 2015. His career will always be defined by Istanbul and the Olympiakos goal, but “the slip” means he will never have closure until he leads Liverpool to the League title as manager. That would be some “character” arc!

His collection of goals could be hung in louvre, single handily kept the club from falling into obscurity for over a decade. As klopp said:”Steven Gerrard – this club is built on, in the last 20 years, on Stevie’s legs” .

– The only man I’d leave my wife for.

– Could do pretty much everything and play every position. He seemed to play football that was 10 years ahead of its time. Scored in the final of every club competition there was. Single handedly carried a group of mostly very average players to a CL title. One of a kind.

– The funny thing about Gerrard is that people still don’t appreciate how good he was. He could play virtually anywhere on the pitch and excel. The ’05 final saw him drag Liverpool back almost single-handed in midfield and then play RB and dominate Serginho. One of the very best

– Just one of England’s best footballers of the last 30 years. Could play everywhere and be the best in the team at it. Looks like he could be a cracking manager as well. Let’s hope he doesn’t go full Souness.

Future days
Was he any good as Rangers manager? Winning the league without losing a game is a major achievement but one tempered by how poor Celtic were. Some also feel he benefited from an institutional bias towards Rangers in Scotland, pointing to how many penalties they get compared to every other club. But such disputes are always in the bloodstream of Scottish football. One trophy in three years, albeit an important one, could be argued to be underperforming for a club the size of Rangers. That St Johnstone won more trophies in the same period is remarkable. However, against this, is their performances in the Europa League which have been really good in making the last 16.

He’s just signed a three-and-a-half-year contract at Aston Villa. I think it is safe to say no-one has much of an idea what to expect from him. What counts as success for Villa? A cup win? A European place? It’s a bit of an odd situation because this appointment is being nakedly seen as an extended audition for the Liverpool job with Jurgen Klopp’s contract ending in 2024. But what sort of achievement at Villa will qualify him for that biggest of jobs? That is harder to say. A couple of years of mid-table finishes and he may look far less viable as an option. However, this is a chance he has to take because he can’t be expected to walk into that Liverpool job without some experience of managing in the top flight and managing a relatively big club.

While it may make sense, to me it feels like an awkward fit. Not for any specific reason, I just find it hard to imagine him as Villa boss somehow. This may change in coming months and it is certainly true that if he hadn’t taken this job, what better one would be offered to him?

It will be a testing time but he has some quality to work with and a top half finish should not be beyond him. Will he impose a style on the club? Will they be a pressing side, be reactive or proactive? Will he play a three or four-man defence? One thing he can be sure of, he almost certainly won’t get as many penalties and his right-back will not be the top scorer.

It feels like Stevie has been around forever simply because he’s been such a dominant force in English football for so long. But Stevie the manager is just starting and at 41 it seems likely he’s got a good 30 years to try and dominate the management game the way he did on the pitch.

All top coaches have a style, have a method of playing which makes them standout. It’s part of what the club buys when they hire them. It’ll be interesting to see what Gerrard’s is. He’ll always be a folk hero on Merseyside for his playing career, whether it will also be because of his managerial brilliance is another story not yet written in the ongoing and quite remarkable adventures of Stevie G.