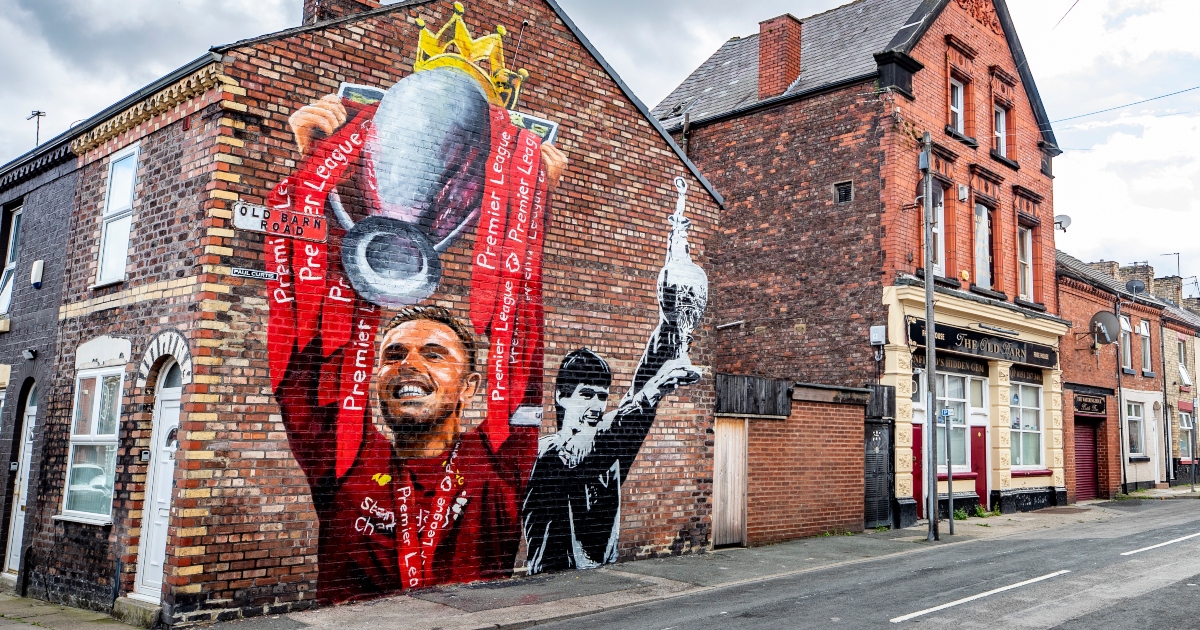 Sir Alex Ferguson knows now that he ‘missed out on a really good person’. Johnny Nic gushes over the Liverpool captain…

Who’s this then?
Jordan Brian Henderson is a 31-year-old, six-foot Liverpool midfielder. Born in Sunderland, he made his professional debut for his hometown club in 2008, went out on loan to Coventry for half a season in 2009 and returned to win Sunderland’s Best Young Player award two seasons running.

In 2011 Liverpool turned up and offered the Mackems cash, believed to be £16-£20 million for our man. The Black Cats couldn’t grab the money quick enough. And for the last 10 years, he’s been at Anfield. Made club captain in 2015, he’s now played 488 career club games and scored 37 times, the latest on Wednesday to win the game against AC Milan with a fine strike from the edge of the box.

He’s also got 66 England caps in the cupboard under the stairs to go with his Premier League winner’s medal, his Champions League winner’s medal, his League Cup winner’s gong, FIFA Club World Cup and UEFA Super Cup. He must also be one of the few players to have a runners-up medal in every tournament bar a World Cup; Champions League, Europa League, League Cup and FA Cup and the Euros for England. He was also the Football Writers Player of the Year 2019-20.

Early in his career for Sunderland, he caught the eye as a bustling, progressive midfielder who very much stoked the boiler in the engine room (this is not a euphemism). For the first couple of years under Jurgen Klopp, more typically he moved further back to work as a back-four screener, working more as a disrupter than a creator. In recent years this has changed again though, and he’s back in the fulcrum of the midfield, making the machinery turn over.

Quietly and remorselessly he became crucial to Liverpool’s success, despite Sir Alex Ferguson, somewhat bizarrely, feeling his gait was not suitable for an elite player.

Why the love?
Everyone likes to see a working-class kid from humble origins climb to the top of the tree. It remains one of football’s most important attractions and Jordan is very much that.

For the first few years of his career at Liverpool, it’s probably not unfair to say that some fans wondered exactly how much he brought to the team. He was a hard worker but it didn’t seem like he did much other than sweat heavily. Possibly he was somewhat in Steven Gerrard’s shadow until his retirement in 2015 but he has long been underestimated for his role in the side. His job was to allow others to play and the man that does that is often overlooked. But there’s no doubt his game has developed and he’s grown into his role as a senior player magnificently, playing with the confidence that experience brings.

He was an all-too-easy target for the usual mind-in-neutral internet blarthounds and even more so because he played for Liverpool. That some of football’s community are despicable wankers is no surprise, of course, however Jordan’s fans always knew that this focus of hatred was born out of a sense that he was actually an important element to Liverpool’s side. That there was, until recent years, some surprise that he was so valued for club and country it was no shock to anyone paying close attention.

He has always been the biggest cog in the Reds midfield machine, playing an increasing role in terms of organisation and discipline, setting standards of effort and commitment that had to be matched by the rest of the team. In recent years, he’s turned into a far more advanced player, often taking the ball in the centre circle and spraying balls out to either wing, while still breaking up play when needed and putting some backbone into the side. He’s even had to fill in at centre-half.

I often feel that the football media sometimes doesn’t appreciate why supporters love a player like Jordan Henderson. In short, it is everything he’s not. Not flashy, not self-aggrandising, not self-obsessed, not a tw*t. While the papers can be absolutely obsessed with the likes of Cristiano Ronaldo or Wayne Rooney, Henderson just gets on with his game and his life without any fuss and bother. Fans love anyone who gives everything for the cause and no-one has ever accused him of not doing that. Stay 10 years, in these circumstances and you become an absolute legend.

As club captain he was a prime mover behind the Premier League player’s decision in 2020 to donate money to NHS charities. Player’s Together donated a reported £4million of the league’s £3.1billion wage bill to health service charities. This earned him an OBE for his services to charity. This year he also organised donation of fees and prize money again to health service good causes.

A totally down to earth character, in an era so stuffed with money and shallowness, he really stands out as a man of integrity and soul; a reminder of the roots of the game. He’s been praised for positive responses to LGBT issues. After winning the Champions League he managed to find and embrace his father, a cancer survivor. It touched many hearts.

– Statesman of the game who has improved immeasurably from the boy who signed from Sunderland. Aside from that his work on the pandemic response from the players, visibility on rainbow laces and his general willingness to weigh in on societal issues is hugely admirable.

– He seems to be a genuinely good person who also happens to be a very good player. Had massive pressure replacing SG as captain and has grown into the role brilliantly. Will go down as one of LFC’s greatest ever captains and rightly so.

– Shame his dodgy gait ruined his career. He had potential.

– That time when he stared icily at Diego Costa was something else.

– Good pro. Knows his career is always evolving. Until the Euros this summer, he really should have been captain of England.

– Proof that Sir Alex is fallible, after he suggested that Jordan would be too injury prone due to his gait..

– Married to a Mackem and have had loads of Mackem friends and work colleagues. It’s gone from everyone questioning why we paid so much for him to now everyone claiming to have gone to school/played with or against/coached or knowing his mam. I mean absolutely everyone. Legend.

That great strike against Milan…

If this doesn’t moisten your eyes, you may be a robot…

Future days
He’s just signed another four-year-contract which will, if he sees it out, take him to 35 years of age. Old enough to retire, but if he’s still in decent nick, I don’t think anyone would be surprised to see him see out his playing career back at the Stadium of Light, in whatever division the Black Cats are in at the time. His international career is probably winding down a little now, having been superseded by the Declan Rice and Kalvin Phillips partnership. However, it seems likely he’ll be an experienced squad member until after the next World Cup, ideal to bring on as a substitute to see out a game or to shore up the midfield. He probably wants to add a World Cup runners-up medal to his collection – it’s the only one he doesn’t have!

Liverpool also have a great chance of winning something against this season and they’ll need him on top form in order to do it, as the game against AC Milan on Wednesday proved.

He’s played over 40 games in seven out of 10 of his seasons at Liverpool but did suffer injury in the last outing, it’s to be hoped this isn’t a precursor to an increasing issue with things going snap.

He defines this current successful iteration of Liverpool and will go down in legend as the captain and driving force behind one of the great club sides of the 21st century, a side that has thrilled more than any other with its dynamism and bravery. It will be a fitting legacy for this very decent Mackem lad.