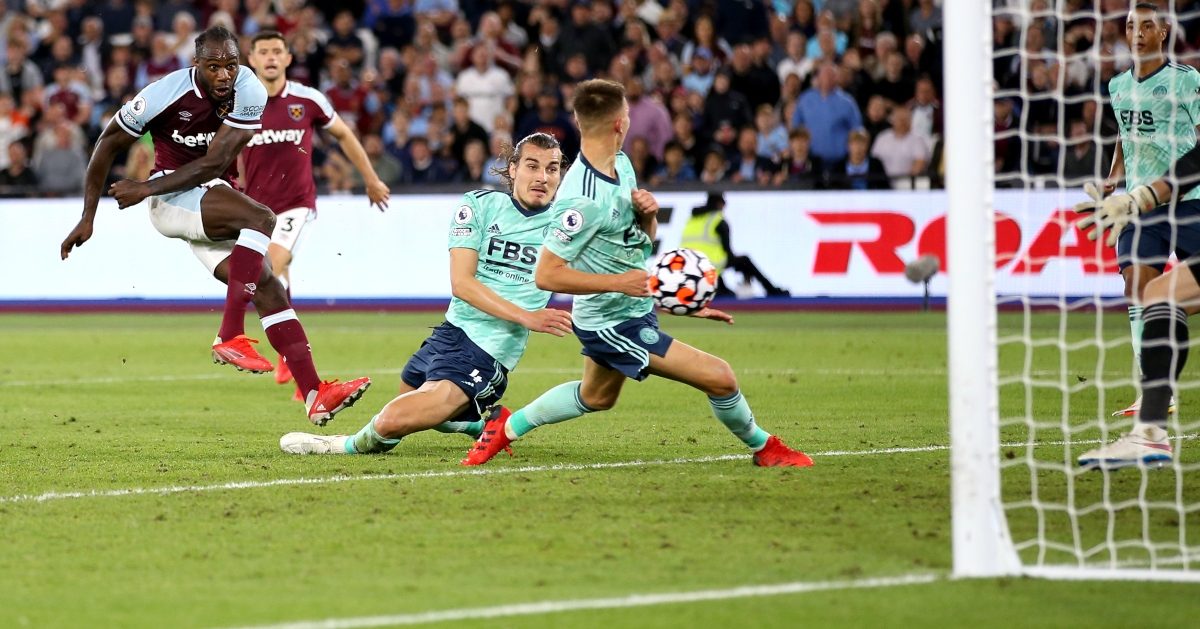 Michail Antonio is much more than simply a battering ram. But there are few better at thrilling crowds with sheer brute force. Johnny Nic gushes over the Hammer…

Who’s this then?
Michail Gregory Antonio is now 31 years old. He’s a 5’ 11” Wandsworth-born forward who is now playing his seventh season for West Ham United and seems to really have hit the best form of his career. He heads the top scorer list so far with four goals and, as crucially, three assists.

He got his start in 2008 at Tooting & Mitcham United in the Isthmian League Premier Division for whom he scored 10 goals in 12 games. This quickly brought him to the attention of Reading. He was on their books for four seasons but only got an extended run out in 2010-11. The rest of the time he was out on loan at Cheltenham, Southampton, Colchester United and Sheffield Wednesday

He had minor success at each, scoring a few goals but hardly prolific. In 2012, the Owls signed him. While on loan he scored the winner in the Steel City derby and helped the club get promoted. He was their leading scorer before getting injured. Scoring four in 28 the next season was enough to get him a move to Nottingham Forest for £1.5 million on a three-year contract. The 2014-15 season was his best campaign in terms of goals as he scored 15 in 49 games. He was named player of the season.

As he started the next season really well, plenty of clubs were sniffing around him, with West Ham eventually signing him for an impressive £7million.

It took him five seasons before he’d get into double figures for goals. This was, in part, because he played in various positions, including full-back and winger, but even now, 10 is as many as he’s managed (twice) in a campaign.

This season has started well. He’s been playing through the middle in a better functioning side. He looks like a player, if not exactly transformed, then certainly one who has got a renewed focus and purpose to his game. He’s now West Ham’s top Premier League goalscorer which perhaps speaks more of their lack of goalscorers down the decades. For perspective, his 54 goals across seven seasons were matched by Tony Cottee in two seasons in the mid-80s. Even so, his big, beaming open face is a joy to see every time he nets.

Why the love?
Now in his 30s, it feels like he’s been trying so hard to break through during his career, with a lot of downs and a few ups and that makes his current success feel all the sweeter.

For all the attractions of footballers with vision and passing ability, for all the great tacticians, the one thing that gets fans off their seats in a stadium is a big fella running fast with the ball as defenders bounce off him.

This isn’t a glorification of the crude or unsophisticated, it’s just that it looks so great from the back of the stands. Neat, intricate passing looks great on TV but you can’t really see what’s going on if it’s at the opposite end of the pitch to you, whereas everyone can see a ball dropping out of the air, being pulled down by a player, turn and run at the defenders. It is irresistible. And a player who does that a lot will quickly become a fan favourite. Even if the player isn’t the best when he gets to the penalty area, we still love him anyway. Adama Traore is the best possible example of this. At Middlesbrough, he would set off at high pace without the first clue what he might do once within 20 metres of the goal, frequently doing anything except threatening to score. But even so, you couldn’t help but love him for it. He just looked so brilliant on the move.

Michail has far more end product than the Wolves man, but his popularity with fans is grounded in the same principles.

His 50th West Ham goal against Leicester City, involving turning about 280 degrees on the six-yard line, shielding the ball, denying the defenders any chance of getting at it, before battering it into the net was a prime example of anti-tika-taka.

The easy thing to say about Michail is that he’s fast and strong, largely because he is and using those assets through the middle, though it may seem basic football, is very effective and better than that, is really exciting to see. For those who think an obsession with sophistication has reduced some of the game’s more physical, direct pleasures, this has been great to see. But his effectiveness in this role can’t be divorced from the experience of playing in other positions, perhaps especially on the wing, which for a while, was his favourite position.

His effectiveness up front is based in good positional sense and great timing. He’s one of those strikers about whom you’d say when he hits the ball it stays hit. There is nothing half-hearted or half-powered about how he strikes the ball.

In his Sheffield Wednesday days, his coach pointed out to him that as the ball came across, he headed it with his eyes closed. So he taught himself to head it with his eyes open in order to better target the ball on the goal. Soon after, he had his best season for Forest, so maybe it really did help him score more often.

He seems such an open player with no side to him, who, when scores, is genuinely delighted and fans always love that. You don’t have to be the best player in the world to get the love from the terraces, often a real trier is more popular.

– Watched him versus Celtic pre-season and even though it was a young defence, he just ran riot.

– He was like a Group 1 thoroughbred taking on Shetland ponies at times. Always a joy to watch, such class on the pitch.

Liked him from when he played for @SouthamptonFC back in the League 1 / Johnston’s Paint Trophy winning glory days. Now even better and always scores against us, nailed on to do so tomorrow…

– His one season at Forest in 14/15 was something special, one goal that stood out was against Fulham, long ball from own half, he brings it down on his right, spins the defender and curls into the bottom corner, truly beautiful.

– Winning his only silverware with Saints in the 2010 JPT final

– Despite his continued success at elite level, he has the eternal look of a lower league player gatecrashing a party he’s a bit surprised he managed to talk his way into. I mean this as a complement, btw.

He reminds me of Ian Wright in a way (not just because they are both strikers). He gives off that carefree vibe of a guy who achieved his dream late on and can’t believe his luck. A great character, hilarious and, on the pitch, a very good forward

Players bouncing off him…

All his Forest goals. Some crackers in here…

Future days
He initially put off playing for Jamaica, hoping for an England cap but recently, with that a receding possibility, he decided to play for Jamaica and made his debut this week in a 3-0 reverse against Panama.

Regular injuries have often hampered his progress throughout his career and to some extent, even now at 31 it feels like he’s a new striker or at least someone who has really found his calling.

This is relatively unusual in the modern game where players are identified for certain roles early in their careers. Even now, 13 years into his career, he’s only played 430 games worth 111 goals to his name, so it’s not like he’s going to burn out in the next couple of years. Certainly, he has seen no drop off in pace, the opposite if anything, so a career into his late 30s does not seem unlikely.

Any side always needs a player like Michail, able to break a deadlock with pace and power, a player who intelligently works the channels and can put one in the top corner from pretty much any distance. So it seems like he’s got quite a few more years and quite a lot more goals to score yet.