Home Johnny Nic Phil from Brazil is back! Coutinho will be a bargain for Villa 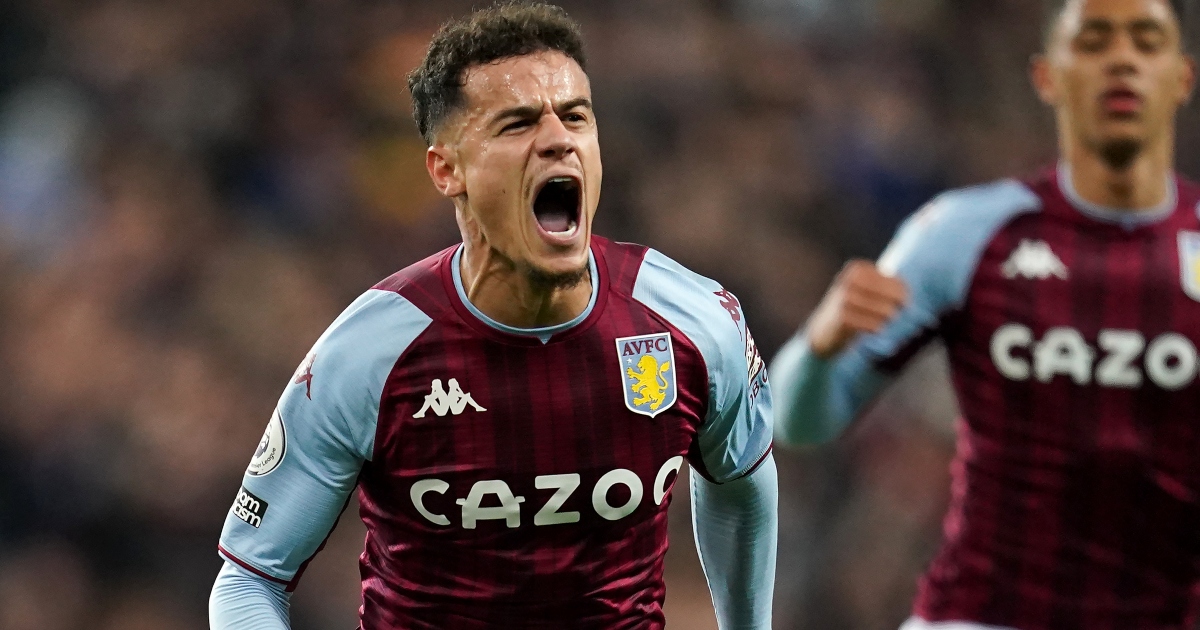 Who’s this then?
Philippe Coutinho Correia is a 29-year-old, 5ft 8in midfielder from Rio de Janeiro in Brazil. He’s currently contracted to Barcelona but is on loan at Aston Villa where he scored one and assisted two goals against Leeds United midweek.

He spent his early career in Vasco da Gama’s youth system and was a prodigious talent from a young age, playing for Brazil under-15s. Aged just 16, Inter Milan scouted the young Philippe, got four million euro out of their expensive leather wallet and handed it over for his services, allowing him to stay on loan at Vasco until he was 18 to keep within FIFA regulations.

When he finally got to Italy, the 1950s railway branchline station master that is Rafa Benitez was Inter’s manager and declared Coutinho to be the future. This turned out not to be true. He struggled to make an impression and for his second season in Europe was sent on loan to Espanyol, playing 16 games and scoring five. Mauricio Pochettino was his manager at the time and about to become Southampton manager.

Back at Inter the next season he was no further forward and so in January, following a tip-off from wiley, old Rafa, Inter took Liverpool’s £8.5million in return for the Brazilian’s services, piping Mo Po to his signature, who also fancied a slice of the Coutinho pie, after being impressed with him in Spain.

The 2016-17 season was his best for goals, netting 14 in 36 games. But all was not well behind the scenes. Barcelona, opened up their safe, counted out £72 million and waved it at Liverpool, who said “do one will yer, la”. Two more bids were made and given the “jog on, mate, eh” response. A Barcelona director claimed Liverpool wanted £183 million quid. Liverpool said it wasn’t true, but it almost was. The final deal copped £105 million rising to £142 million if certain clauses were met.

Report: Liverpool board were euphoric over Coutinho sale

He had been on sizzling form for the Reds for the first half of the season Liverpool having registered 12 goals and nine assists in 20 appearances, but he was determined to get offski, so offski he went, leaving some ill-feeling in his wake.

But life at the Catalan giants did not go smoothly and he struggled to match the form he had shown for Liverpool. He only played one full season of 54 games, scoring 11 times in 2018/19.  In total he made 106 appearances, scoring 26 times.

It was thought that a move would do him good and where better than German giants Bayern Munich? They coughed up an 8.3million euro loan fee, plus his wages, with an option to buy for an eye-watering 120million euros. Yeah, right. He played 38 games, scored 11 and won a Treble, including the Champions League.

It had been a decent spell but Bayern didn’t want to buy him and back he went to Barcelona where his contract still did not expire until 2023. Notoriously crap coach Ronnie Koeman was now in charge and in December Philly C got knee knack and was out for the season. After another unsatisfactory start to this season, Aston Villa now managed by PC’s old captain said ‘we’ll take him off yer ‘ands, mate’ and he made a loan move, with an option to buy for a more reasonable £33million in the summer. Newcastle had been sniffing around waving giant bundles of blood-soaked cash as per usual, and his agent Kia Joorabchian was hoping to kick off a bidding war, but Phil wanted nothing to do with the Saudi mob and was delighted to hook up with Steven Gerrard once more.

He hit the ground running, has started really well and looks to have made Villa significantly better. It’s been a long strange trip for the lad. He’s now played 454 games for club and country and scored 108 times.

Internationally he’s got 65 caps and 19 goals but hasn’t really been in favour since 2019.

Why the love?
It isn’t impossible that for some reason, the Premier League really suits how Coutinho plays. Because he was half the player he had been for Liverpool when in Spain and to a lesser degree in Germany. He was decent, that goes without saying, but the restless creativity, vision, ceaseless running and ability to unpick defences in tight spaces, seemed to have deserted him by and large.

However, even though his three games at Villa is a small sample size to make a judgement from, the fact is, he already looks like the player he was at Liverpool. It is a strange situation, but one which Villa fans must be cock-a-hoop about.

Is the Premier League played at a faster pace? Could that suit him? Is the defending much worse than in Spain and that means he has more room to play? Is it more physical? We certainly know the Premier League and everyone who it makes rich, on and off the pitch, act as paid propagandists for both its quality and competitiveness, despite this being at least contestable. Maybe it’s simply that new boss Steven Gerrard knows how and where to play him to get the best out of him, and others didn’t or couldn’t.

In his peak Liverpool years, he was, at times, almost unplayable. With tremendous close control, light-footed, fast across the turf and the ability to pick out the most difficult and devastating passes, he was axiomatic to their best performances.

But it doesn’t stop there, a superb striker of the ball, he can lash one into the top corner from fully 35 yards. He’s a brilliant free-kick taker and has got a great ping in his right foot to score up and over, curling free kicks, usually into the top left corner. If you let him cut in from the left on his right foot, he’ll batter it into either corner.

He is an intelligent footballer who does everything with purpose and precision. The thing is, you couldn’t call him a robust physical player. He is, if not slight, then certainly not a giant slab of man beef. One of those players who, if he ran on snow, would leave no footprints. So that he can survive a physical game is, on the surface, remarkable. But he is a product of Vasco de Gama don’t forget and they forge hard, wee boys who know how to handle themselves.

Oh yeah, he can also do that thing where you slow down, almost stop, then take off at top speed again, all in one flowing move. I love that. It is impossible to defend against and takes him past floundering defenders.

Basically, Aston Villa have got one absolutely brilliant footballer on loan and can buy him in the summer, for, by today’s Alice In Wonderland Premier League standards, almost no money. Jammy gets.

Three great moments
His work in the Villa v Leeds game made us all go, oh yeah, that’s the Coutinho I remember…

The lad knows how to strike a ball…

Some really brilliant assists here. The quality of his passing is extraordinary…

What the people say
– Gets people off their seats at Villa Park. After Grealish left we’ve needed some new heroes and Coutinho, Buendia and JJ are going to be really fun to watch til the end of the season

– Liverpool convincing them he was worth £142m is the greatest piece of alchemy known to man.

– Adored the mad little fella. Having the ability is one thing but the vision on him. Some of the passes he made to Sturridge were unreal, let alone the incredible goals. Shame about his back, mind.

– Coutinho is one of few top-level players who understands his role in life is to bring joy. Watching him play unconstrained and free to express himself is wonderful. One of the last “proper” Brazilian midfielders?

– His remarkable powers of recovery from chronic back pain whenever an international was scheduled in 2017.

Future days
Already it isn’t too much of a stretch of imagination to think that Philippe will sign for Villa this summer. The thought of going back to the smouldering ruins where Barcelona once stood for yet another season, is surely unpalatable for him. He hasn’t been massively overworked in recent years and modern player welfare is so good now, he can expect to play for another nine or ten years. All of which is good news for Villa.

They are currently 11th and ninth is not beyond them, 8th if results go their way. A positive top half finish, will give them confidence to push on for the Europa League next season and be one of those teams that the top three might draw with, or occasionally lose to and that’s about as much as 17 teams in the league can hope for.  Clearly, they need to get rid of defenders who you know will commit a crime against football every game.

But if they can shore up the back, with Coutinho pulling the strings in the front two thirds, you can see a great feature for the club and for their ever more impressive manager.