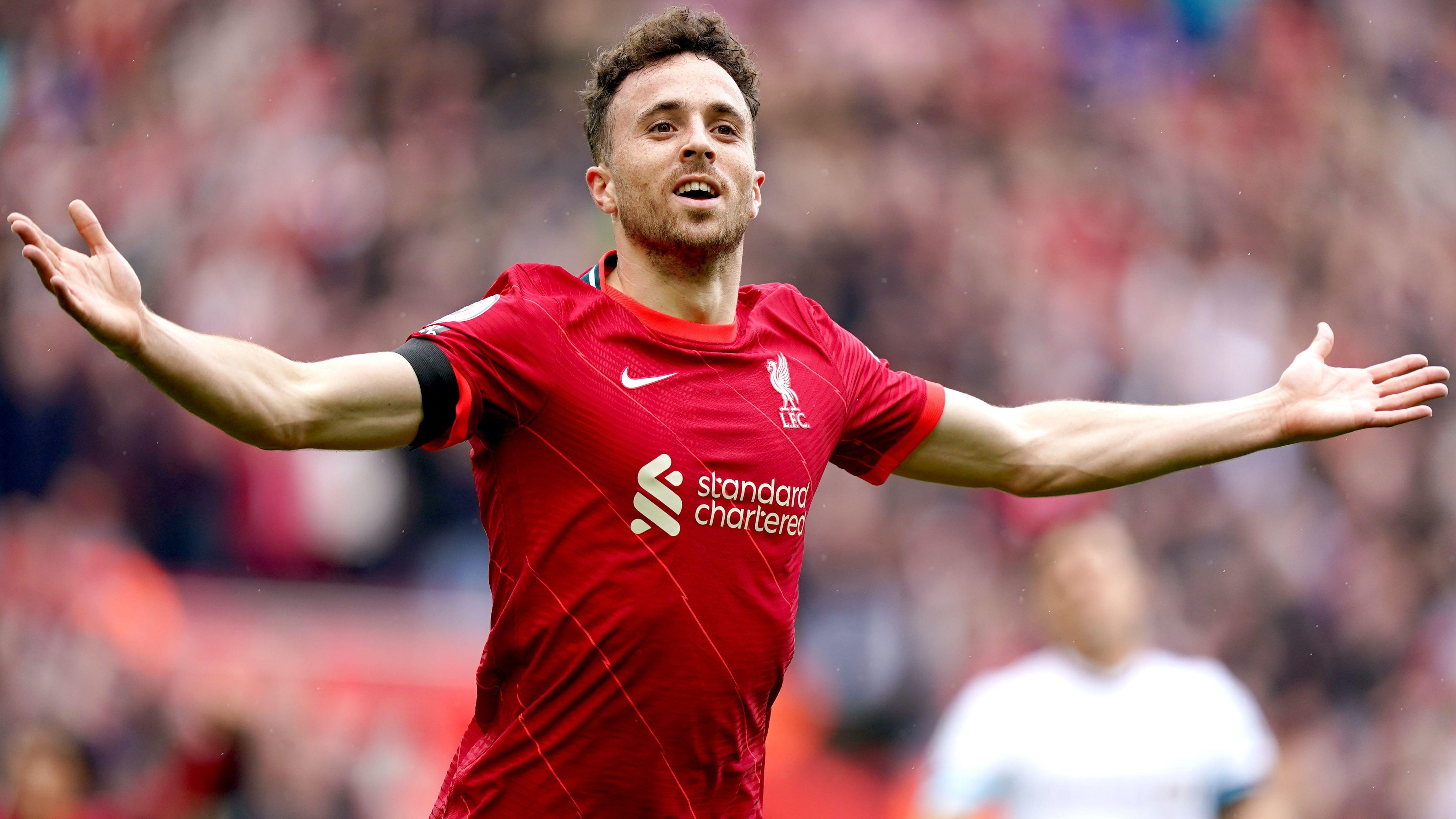 Liverpool have recently handed a fat new contract to Diogo Jota, one of the players who sums up Jurgen Klopp’s success. John Nicholson is a fan…

Who’s this then?
Diogo José Teixeira da Silva is a 25-year-old 5ft 10ins striker currently playing for Liverpool who has recently signed a long-term contract extension, taking him up to 2027 with the Reds. Born in Massarelos, a suburb of Porto in Portugal, he got his start in the youth team of Paços de Ferreira and made his first team debut in October 2014. In total he played 45 games for the club across two seasons, scoring 15 times.

This decent form saw Atletico Madrid swoop down like a golden eagle and snatch him away in a five-year contract, but loaning him to Porto for a single season to allow him to develop his game. He scored nine in 37 for the club. At the end of the season, his agent Jorge Mendes, who was busy turning Wolverhampton Wanderers into a Portuguese colony, got him a loan deal to the Black Country.

They were in the Championship at the time and Diogo filled his boots, netting 18 in 46 for the club, helping them to win the league and achieve promotion. Half way through the season, Mendes made a deal with Atletico to buy him for £14million, so he never actually played for the Madrid club.

It took him a little time to settle into his Premier League groove, scoring only 10 in 37 in his first top-flight season, however, the next season, he hit his stride and scored 16 goals. That said, I don’t think anyone had him marked down to be bought by a club the size of Liverpool, but Jurgen Klopp clearly saw that he could add to the strength in depth of his strike force and was prepared to pay handsomely for the pleasure. He slapped £41million on the table, grinned vaguely manically, put Diogo into a big sack and took him to Merseyside.

He made his debut five days later and scored his first goal at the end of September.  He had the honour of scoring Liverpool’s 10,000th goal in a Champions League game against FC Midtjylland. He hit the ground running scoring seven in 10 games, scoring on each of his first four home games – the first time that had been done.

Leg knack put him out for three months and he finished the season on 13 goals in 30 appearances. He’d made a big impact in that first season, won the manager’s trust so that in 2021-22 he made 55 appearances, notching 21 goals.

He twanged a hammy in pre-season, so is out for a few weeks but there’s no doubt how axiomatic he has become to Liverpool’s play.

He made his international debut for Portugal in 2019 and has now racked up nine goals in 27 games. He’s already got an impressive trophy cabinet with a Championship title, an FA Cup, a League Cup winners medals, a Champions League runners-up and a Nations League title with Portugal and, with a new extended contract signed, he’s far from done yet.

Why the love?
The transfer to Liverpool came as a bit of a surprise, not because he wasn’t a good player, but because he was hardly well-proven at the top level as a major goalscorer. It is much to the credit of Liverpool’s scouting that they saw a player they could develop within their system instead of just buying the player with the highest goal numbers. While £41million was a lot of cash, he’s probably doubled his value already. This is how you run a football club properly. How it must sicken Manchester United fans to see this sort of intelligent approach rather than the haphazard and thoughtless governance of Old Trafford.

He brings a wide palette of skills to the team. He’s quick, he’s got superb close control, he’s calm in front of goal, can hit it hard and true and has the vision to try things that are unexpected. But apart from all of that, it is how he works as part of that front three that really stands out. Great team play where every player works for every other player is hard to achieve. But we’ve all seen what happens when individualism is pandered to over and above the team aesthetic.

I suspect what Klopp saw in him was a large degree of flexibility and that is so important in a fluid, counterattacking system. He can play off the right or the left or through the middle and that applies to all of the Reds forwards. He’s got the pace to play a high pressing game and the limitless energy to keep it going for 95 minutes, again this is crucial to how they want to play. When you add those talents to a great positional sense and quick feet and it’s no mystery why he’s done so well.

Seeing a player actually improve when placed in a team and being surrounded by better players is always endearing. There’s no doubt that after 24 months at Anfield he’s an even better player than he was at Wolves. As fans we love this because it reflects a club that is coaching and developing talent, not just buying it in as the finished article. In fact, you could say that about almost all of Liverpool’s first team. All are better players than they were before joining. They are elevated by the club and the manager.

All of his talent distilled into one reel…

Future days?
It hasn’t really been long since Jota arrived but he’s completely embedded now and is a crucial part of how they play. Sadio Mane has gone and two new signings in Darwen Nunez and Luis Diaz have added weight and firepower. It is greatly to his credit that it is his ability to settle into the system that has allowed Klopp to incrementally build a new attack without having to perform a complete reboot. Jota was the first signing in that transformation and as such, very important.

He’s such an entertaining player and one who is developing a really ruthless streak in front of goal. He’s only 25 and has probably his peak five or six years of his career ahead of him at Liverpool. And when his career is over, he can look forward to a new gig playing eSports as he’s apparently a very good gamer, being ranked world No. 1 in FIFA 21’s Champions Leaderboard in February 2021. With eSports likely to be included in the Olympics in the future, it might offer a second opportunity on the international stage.

Yet with all this, he seems a rather understated character and certainly not an egotistical strutter, forever preening and looking at himself on the big screen. The Liverpool way demands you subsume your own ego to the collective, so maybe that is what Klopp saw in him. Certainly, he has proven to be one of the most successful transfers of recent seasons and likely to thrill for many years to come.