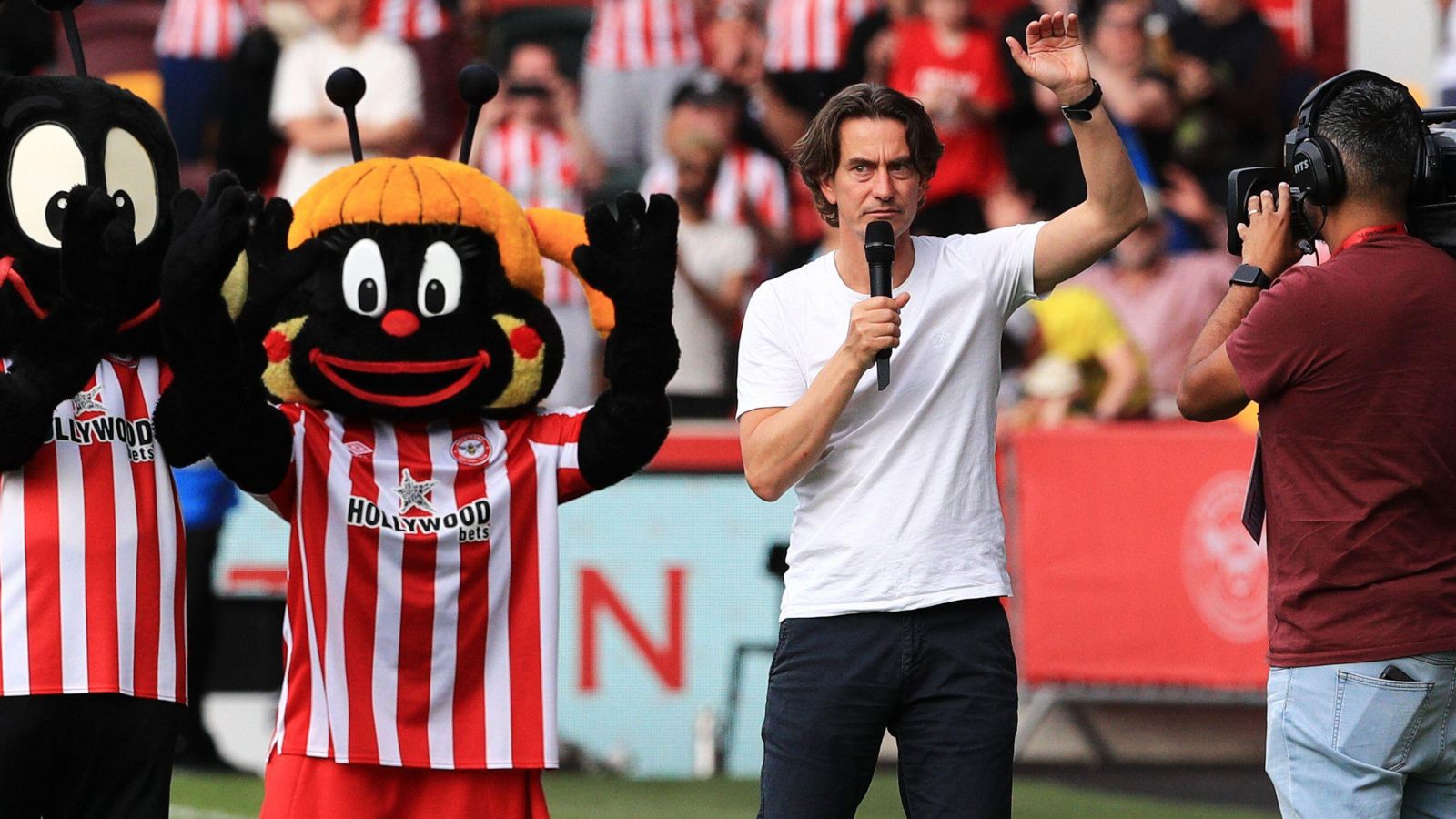 The style of play, the interviews, the ‘no d*ckheads’ policy and, of course, the hair – Johnny Nic loves everything about Thomas Frank. Here’s ‘What’s So Great About…’ the Brentford boss…

Who’s this then?
Thomas Frank is the 48-year-old manager of Brentford. A Dane born in Frederiksværk, he never played football professionally. The boys willnae like that. Laptop guru is he? Yes he is but despite never having been paid to play football, he built a reputation as an excellent youth coach at Frederiksværk BK, Hvidovre IF, B93 and Lyngby. This brought him to the attention of the Danish FA who took him on as coach for the U16s and U17s in 2008.

He took the 17s to a Euro semi-final and qualified them for the World Cup. This success led him to be appointed U19s manager which he did from 2012 to 2013 before being appointed coach of Brondby. Aged 39, this was his first senior position in football.

The club finished third and fourth, qualifying for the Europa League but he resigned after nearly three years because the club chairman had a pop at him on a fan forum under a false name, which seems vaguely bizarre.

Nine months later he took an unusual move abroad to Brentford to work as an assistant coach to Dean Smith, working with the reserves. He said both he and his wife and family wanted to experience a different country and a different culture. That’s very refreshing to hear in these times where freedom of movement is sold to us as a very bad thing.  Can you imagine what sort of mental straight-jacket you’d have to wear to think that?

He did a good job, was well respected and got a contract extension to the end of 2018-19 season. But in October 2018 Dean Smith went to Villa and he took his chance to take the big chair for himself.

Brentford were in the Championship and he had an inauspicious start, registering only one win in his first 10 games, but form picked up in the second half of the season and they finished 11th.

Absolutely no-one took this as an indication that they would be candidates for promotion the next season but they finished third, got to the play-off final but lost 2-1 to Fulham. Close but no cigar.

That would come next season when they finished third again and beat Swansea in the play-off final 2-0 ensuring promotion to the Premier League.

This was no small achievement for a club that was last promoted to the top division in 1935 and one that was made on a relatively small budget. They were relegated in the first season after the war and hadn’t returned to the top flight since, spending the mid 60s to late 70s in the fourth division.

But that wasn’t the end of the story. A year ago, he prepared for the season by moving out four players in the summer and bringing in 10, but spending just £28.5 million keeping a hardcore of players in the first team who got them promoted.

The opening game of the season, played in their new Community Stadium saw them give Arsenal an absolute schooling. They lost only one of their first eight games of the season but had a difficult Christmas and New Year winning only once and drawing oncee in 13 games but recovered to win seven out of their last 10 games, thanks in part to Christian Eriksen’s arrival in January.  An up and down season ended with them in a creditable 13th position after starting as most people’s relegation favourites.

Why the love?
The play-off finals, the promotion and the kicking of some big Premier League arses all explain why Frank is so popular with his own fans, but more broadly than that, the football he’s got his team playing and how he conducts himself with the media has won us all over. Brentford have been great to watch and Frank is a new force in the league who is strikingly different to everyone else.

He’s developed a strong, what he calls ‘no dickheads’ culture at the club and I think the fans absolutely love that. He seems to have a strong personality but without a nasty bone in his body. He set up Brentford to play a specific sort of football and then set about recruiting players who fitted the system rather than the other way round. How modern and sensible. How laptop guru-ish.

With a background in player development, he is very good at recruitment, basically using the spreadsheet method to identify players whose stats suggest he will fit the position he wants them to play him, then assessing their character to see if they’ll fit the ‘no dickheads’ policy.

And there’s the hair. It is the hair of someone who should be playing keyboards in a European prog-metal band. It reflects his character, somehow. He is expressive, creative and voluble. He’s also got the sort of massive thick ears which give him a hobbity sort of appearance. With sparkly eyes and a big mouthed grin, he is such an engaging character.

It’s worth remembering that when we hear him, he is speaking in his second language, but so good is his English that it would be hard to tell that was the case. He is very passionate and always speaks with an almost disarming bluntness. In this respect he seems like a real person, not a football manager at all. The British coaches tend to express themselves in the peculiar language that is football-speak but the overseas coach, not having been inculcated into the paranoid, adverb-free secret society, sound refreshingly very different.

He’s also not a suit and tie man, often just wearing a light sweater or long sleeve t-shirt. This gives him a casual, relaxed kind of image and all of these things make him easy to like. That said, as the season went on and the team went through that difficult spell, going nine games without a win, his post-match interviews were intense and he looked wired up and stressed out. His interview after losing 3-1 to Manchester United at Old Trafford was a classic example.

Tactically, he played some interesting football. That opening day win against Arsenal was based around the attacking 3-5-2 he’d used towards the end of the Championship season, in getting promotion. They are full of running and as soon as they rob the ball, look to get it forward quickly which has led to some people saying they play long ball football, like it would be a bad thing. In truth it is more purposeful than that. However, throughout the season he leaned heavily on Ivan Toney who ended up with 12 goals and five assists. For the five games he was out injured and the sixth when he returned as a substitute, they didn’t win and picked up just two points. His return to the starting line up in early March having missed February saw them win five out of six.

The one thing they lacked was a midfield creator or a ‘trequartista’ if you like. Thomas’s Danish connections came in useful in January, allowing him to take Eriksen in January. Once he’d got up to speed, he really injected some class into the side. It was a typically thoughtful and creative bit of recruitment from Frank.

Isn’t he great? No players with Premier League experience? No problem…

Another brilliant breakdown of a great game…

Future days?
He signed a new contract in January which lasts until 2025. His next task is to establish Brentford in the top flight and avoid second season syndrome. While he hopes to keep Eriksen that seems unlikely with lots of top clubs sniffing around. We’re so conditioned to think you’ve got to sign expensive players to succeed that anyone who doesn’t must eventually run out of road. However, this need not be true when you can spot and recruit talent as well as Thomas and his team does. Brentford are a good example of the collective being greater than the sum of their parts. When you can create a side to achieve that, you need not have the best players in any position, so you need not spend phenomenal amounts of money.

The new stadium is a huge asset for him. It is a noisy atmospheric place which is a bit of a throwback to less corporate  days. They should aim to win a cup.  Of course, another successful season for Brentford and being such a charismatic personality will inevitably see his reputation attract far wealthier clubs in search of a hip manager to look modern and progressive. So Brentford may just be a stepping stone up the management ladder. He deserves every success coming to him.