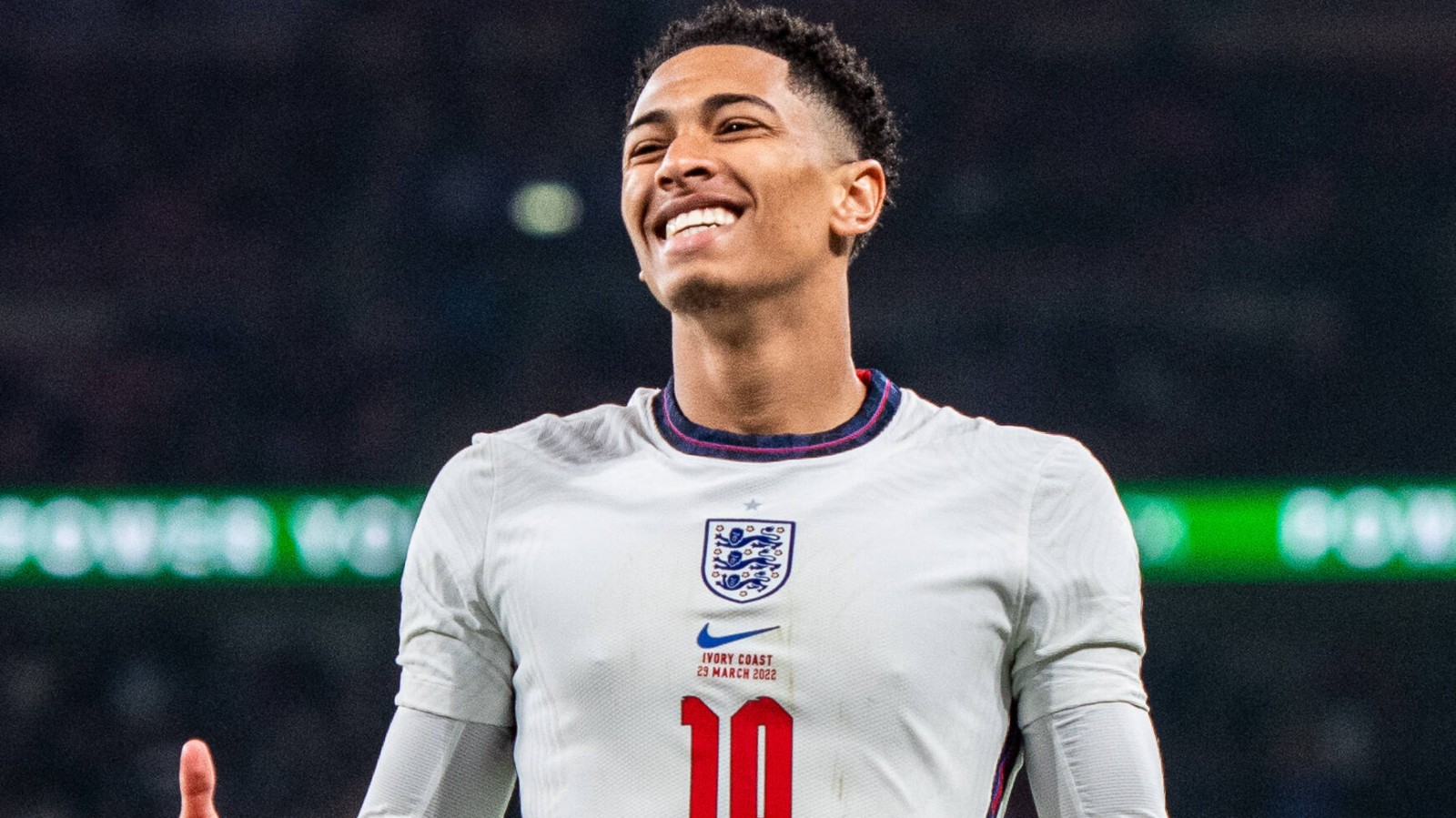 Who’s this then?
Jude Victor William Bellingham will not be 19 until June 29. He’s 6ft 1in and was born in Stourbridge. He is currently playing in midfield for Borussia Dortmund and was everyone’s man of the match this week for England against Ivory Coast.

He joined Birmingham City aged just eight and was a precocious young talent that many clubs had their eyes on when he turned out for the Birmingham Under-18’s aged just 14 and moved up to the Under-23s the following year.

By 2019 he was appearing on everyone’s ‘most promising youngster’ lists and made his first-team debut in the EFL Cup aged 16 years and 38 days. This made him Birmingham City’s youngest ever first-team player. By this time, major clubs in England and all across Europe were all on their hind legs, sniffing the air, fancying a slice o’ the Jude pie.

He was immediately a fixture in the first-team, initially playing out wide, then moved more centrally and finally in a progressive role. Interestingly, manager Pep Clotet moved him into a more responsible role quickly when it became clear Jude could handle the gig.

By the time the January window opened, there were rumours that Manchester United had turned up in Brum with £20million spilling out of its incontinent pockets looking for a quick cheap deal. They were told to feck off because he was also courted by Borussia Dortmund, who, unlike United, are a proper club, have a structure and method and don’t just think buying great players will make a great team. Dortmund know who they are and work to a plan that includes developing great young talent and then selling them for a skip-load of cash.

This understandably attracted Bellingham more than the know-nowts at Old Trafford and Dortmund made him the most expensive 17-year-old when they shelled out £25million plus performance-related extras for him. He left Birmingham City after making 44 appearances and scoring four times. In his one season he won Championship Apprentice of the Year and EFL Young Player of the Season. There was no holding him back. A mature teenager, he moved to Germany, which is abroad, Jeff. Like, it is literally foreign.

12 – England have won all 12 matches which have featured Jude Bellingham – in England's entire history, only Theo Walcott has had a longer winning start to his England career (won first 14 caps). Charm. pic.twitter.com/hCMpqKrNfK

It was to be a great move because it meant he would get games, a lot of games. If he’d gone to a top Premier League club, he’d have been behind other more expensive players waiting for an opportunity. Not in Germany. He hit the ground running, slotting into Dortmund with remarkable ease, scoring on his debut to make him the club’s youngest scorer and later the youngest Englishman to play in the Champions League. He was a first-team regular, only missing a couple of games with a foot injury. He won the DFB-Pokal in 2020-21, his first trophy.

To date, he’s already made 83 appearances for Dortmund and scored 10 times. On top of that, he’s won 12 caps for England since a debut in 2020 against Ireland. He’s played at all age levels for England, won the Syrenka Cup in 2019 with the Under-17s and is the youngest ever Under-21 player. Yet when you seem on the pitch he looks older than he does off it.

It has been a remarkable upward curve for Jude since his days in the Birmingham City youth teams. He has accelerated through the ranks at speed and that fact he had probably his best game in an England shirt against Ivory Coast before his 19th birthday just goes to show what a player he already is and what an immense player he is going to be in the future.

Why the love?
There’s so much to love about how Jude plays the game. The first thing that is so striking is how brave he is. He just doesn’t hide and always wants to progress the ball forward. Maybe this isn’t so surprising for a footballer who has, from an early age, been singled out as special. He must have a lot of innate self-belief, but it also seems to be in his nature to play this way. To see him take the ball in the central third and move through the gears, eating up ground, before laying a ball off to a player in a dangerous position is one of modern football’s more thrilling sights.

While young players can fluctuate in form, this hasn’t happened to Bellingham so far. Indeed, it is hard to even believe he is a young player, let alone still 18. He plays with an air of maturity that typically comes after at least five or six successful years, yet he’s not even at the end of his third season in a first-team.

He must be still learning the game of course, and how he can perform is also geared by the tactical set-up of the team he plays for. Dortmund seems absolutely perfect for him. He constantly finds space and has speed to exploit it.

He’s got super-quick feet, able to flick a ball around or through a defender, knock it from the right to left foot in order to beat a man and he’s got that trick where he knocks it 45 degrees with the side of his heel to throw his marker. Love that.

His 13 assists so far this season for Dortmund, along with six goals show what his all-round game is all about. His excellent close control means he can dribble into the box and score more goals, but also when you’ve got Erling Haarland up front, he can play a through ball for the big Norwegian goal machine to run onto and hit first time.

While Dortmund’s defence has been poor this season and Rangers handed them a 4-2 beating at home in the Europa League, it was Bellingham’s goal that briefly got them back in the game, a wonderful strike from the edge of the D, right in the corner.

So we know his skills mean he can weave a pathway through a crowded box to score, he’s got a long-range strike on him too. He can score with either foot, but he’s only scored one header so far.

When he sets up Haaland in the Bayern game, his pass totally makes the goal by shifting his weight and twisting his body to send the ball where no-one thought it might go. It is brilliant; a winning combination of technique and talent.

His opening goal v Man City is a thing of beauty as he rakes the ball in, leans back and places it where the keeper can’t save it, all from 12 yards out…

Lovely Jack Grealish has a great take on Jude’s talent…

His touches in this game against Bayern sum his entire game up. He’s almost everywhere, all the time…

Future days
Oh man, to think he’s got the thick end of 20 years of his career ahead of him, that is a reason to get up for another day on the rock. Prodigious young players can burn out through being played too much too early, or increasingly suffering from injury. However, this is much more known today and it is to be hoped that Jude will not suffer such a fate. I doubt he will. His game doesn’t rely on physicality as such, nor is he a speed merchant whose Achilles is likely to twang under pressure. He looks big and lean and strong. Quite the physical specimen, in fact.

Being so young, his best position is open to interpretation and development. I feel he does his best work at the back of the front third from where he can break into the box to create damage and score, but he’s also very comfortable operating around the front of the centre circle and being the petrol in the teams’ engine. He’s got energy to burn so ends up covering every blade of grass in most games.

Personally, I desperately hope he doesn’t come to the Premier League, though it seems inevitable he will due to The Big M. Traditionally, Dortmund’s best players end up at Bayern and I’m sure that would be a great move for our man. Internationally, he is surely set to be an England regular for the next 12 years. He is at the forefront of England’s great youth development. Seeing him play with such maturity and intelligence at this early age, is nothing but a good time.

Bellingham is not the sort of intelligent, flexible and exciting midfielder player English football used to produce, even 10 years ago. As hard as it is for some to accept for reasons we don’t need to dissect just now, we are living in a golden age of English footballers that will be talked about when you and I are much older. And amongst those golden rays cast upon the upturned faces of the new generation that populate the lush uplands of English football, is Jude Bellingham.