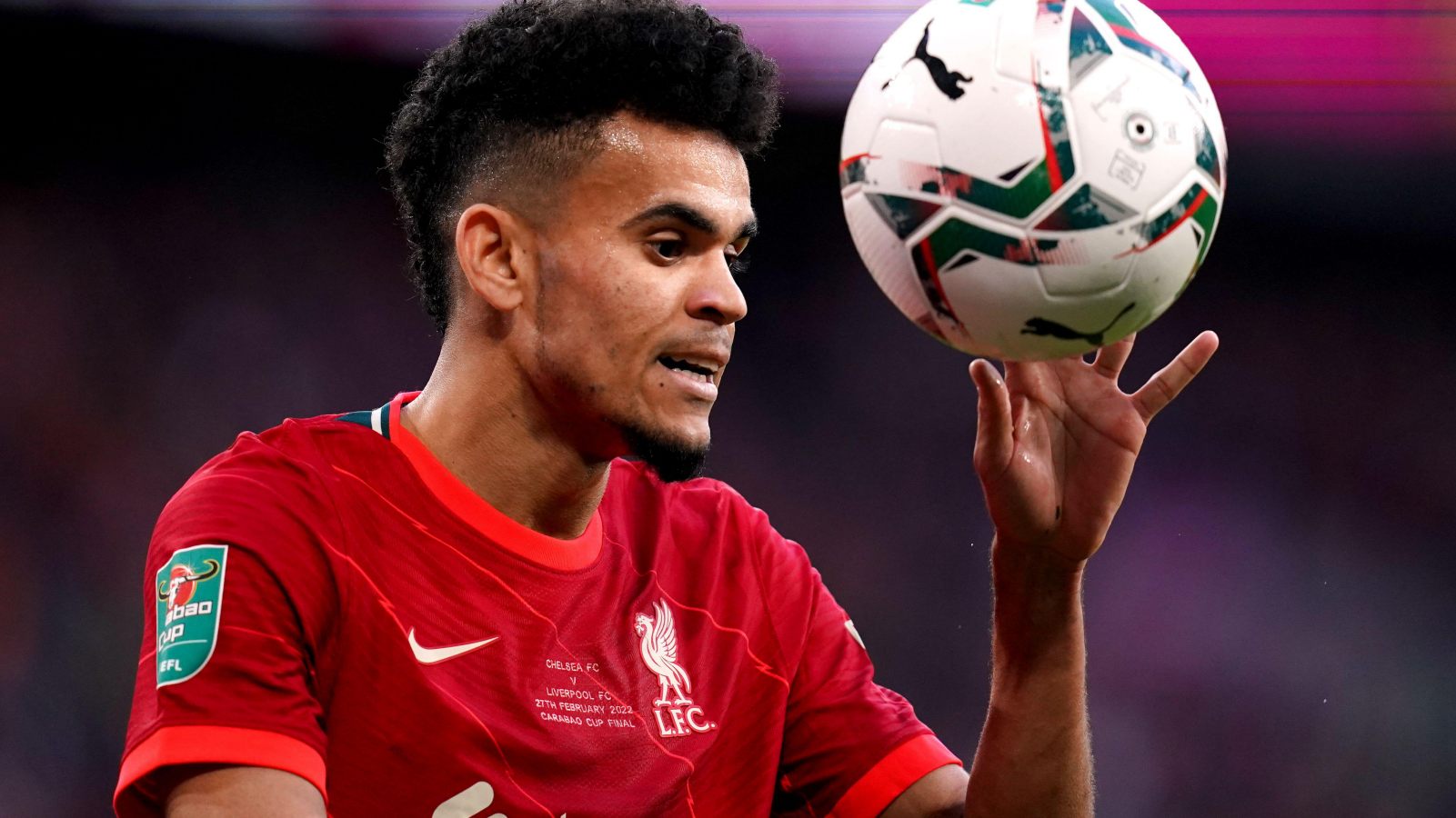 Who’s this then?
Luis Fernando Díaz Marulanda is a 5ft 10in 25-year-old winger, currently in the employ of Liverpool FC. Born in Barrancas, Colombia, he is a Wayúu, which Wikipedia defines as ‘an Amerindian ethnic group of the Guajira Peninsula in the northernmost part of Colombia and northwest Venezuela’.

He was included in the 2015 Copa Americana de Pueblos Indígenas because of his Wayúu heritage and impressed greatly, aged just 18. Atletico Junior signed him up and sent him to Barranquilla, their feeder or ‘farm’ club.  At the time, he was undernourished, and underweight, poor lad, as many of Wayuu are, apparently. He was given a specific diet to help him put on one and half stone in weight. There’s a 2,000 calorie parmo they sell in Middlesbrough that can help with that.

Making his senior debut in April 2016 he soon took a place in Junior’s first-team in 2017, spent two and half seasons playing 108 games, scoring 20 goals. His form as a speedy player who could score goals as well as assist, brought him to Porto’s attention who turned up in Colombia with seven million euros in a big hat and took Luis back to Portugal with them.

Zenit were also interested in signing him but with a choice between Russia and Portugal, no-one in their right mind would choose Russia, would they?  It was a successful move from the get-go winning Primeira Liga 2019–20 and Taça de Portugal. An incredibly fit player who hasn’t suffered any major injuries in two and half seasons at Porto he made 125 appearances and scored 41 times. He scored 26 times in the league and made an impressive 15 assists too.

In 2021 he also shared the Copa América Golden Boot with Lionel Messi as his international career really took off.

So, here was a tireless, pacey left-sided player who doesn’t get injured, is just 25, is a growing influence for his country who can score and set up goals prolifically. So who came a-knocking? Well, it was almost Spurs. In fact, it was so nearly Spurs that I wrote the first draft of this for this column in January when it looked like he was going to throw himself into the cold arms of Daniel Levy. However, aware of this, Liverpool immediately dropped £37.5 million in used tenners on Porto, possibly from a helicopter, promised to pay another £12.5 million in add ons, winched Luis up on a rope ladder, and flew him to Anfield, stuffing £56,000-per-week wages into his pockets as they did so.

He was the perfect player for Jurgen Klopp’s set-up, he fitted in immediately and now it looks like he’s been playing for the Reds for years when it has been less than three months.

Why the love?
Well, he’s bloody great, isn’t he? A thrilling footballer. I love how direct he is. Looking at his Porto footage, many times he takes the ball at the front of the middle third and just goes straight for goal, out-running defenders to either score or feed in a teammate to do so.

He’s one of those players that you gladly hand over your money to see. The fact he made this big move to the Premier League aged 25 probably means he’s mature enough to handle the sudden improvement of finances that came with it and the pressure of playing for such a high profile team. And you can be sure that they’ll soon crank up his income to keep him at the club now that he has already proven to be such an asset.

His recruitment is the perfect illustration of how to successfully buy players; Manchester United, take note. It is not complicated. You buy a player that fits into your system. That’s it. It is no harder than that. You do have to have a system, of course.

Diaz looks like a cookie-cutter version of Mo Salah and Sadio Mane with similar skills to both. He knows how to play in a front three almost by instinct and is totally on the same wavelength as his teammates. Watching them operate as the ball is turned over in their own penalty area. As soon as the ball is at a Liverpool foot, they’re off at pace, full-backs advancing with them. There was a moment in the United game when, as Andy Robertson, picked up the ball around the halfway line and began to run at pace with the front three burning up the grass in front of him, you had to feel sorry for the overwhelmed, brutalised United defence

There was no getting used to a new system for Luis, no settling in period needed. He was parachuted in and as soon as he took to the pitch, even if you hadn’t seen him playing for Porto, it was obvious why they’d bought him.

Eighteen games, six goals and two assists later, he is already a Kop hero. Football is a simple game that is talked about as though it is a complex science, but Diaz is a straightforward, simple player and shows how simple direct football should be played. Get the ball, head towards the goal as fast as possible, score if you can, give it to someone else if you can’t.

He’s one of those players who seems to operate on a different fitness level. A tireless runner with quite a fizzy turn of pace will always endear you to fans, not least because it doesn’t give the opposition defence a moment’s rest. This sort of player also looks good when you’re in the ground because when you’re able to see the whole pitch, you can see how his runs work even without the ball. You can better see how it stretches play, how it occupies the defence and makes space for others.

His performance against Manchester United was stunning, even allowing for the low quality of the opposition. Watching it, it was hard to believe he’s been at the club for such a short amount of time because he clearly understands what everyone else is trying to do. I also think he is, albeit quietly, quite hard. Take a look at him, he looks lean and mean and he’s no skinny lightweight either. He can hold his own as 16 yellows and three reds in his career to date probably also show.

He won the league and cup in Colombia, did a league and cup double with Porto and could easily do the same with Liverpool. What a time to be Luis Diaz.

Three great moments
As one of the front three, he works perfectly…

Scoring for Colombia in an already familiar style…

Future Days
If Liverpool lose Mo Salah, they have the perfect replacement already in the team. It just goes to prove that you don’t need to sign the most talked about, the most expensive, the highest profile players in Europe. You just need to sign a really good player who will work in how you set the side up. That this isn’t obvious to all top clubs is a little bizarre. That some clubs repeatedly make basic mistakes, wasting money on perfectly good players who just don’t fit into their side is a dereliction of duty and just rank bad business sense. While Klopp has signed players who have not always excelled in their position, at least they’ve been bought for that position.

Luis Diaz could be at the club for 10 years. He looks like the kind of player who will stay fit into his mid-30s. It seems likely he’ll be there after Klopp leaves – currently his contract expires in 2024 – but the template for how a successful team can play, has been set.

He is less than three months into a five-year contract and already it feels like he’s indispensable to Liverpool. With next season being a fractured one, interrupted by the World Cup, it may turn out to be important for the Reds that both Salah and Diaz will effectively have a month off mid-season.

As one of the best signings of recent times Luis he seems set to thrill us for many years to come.