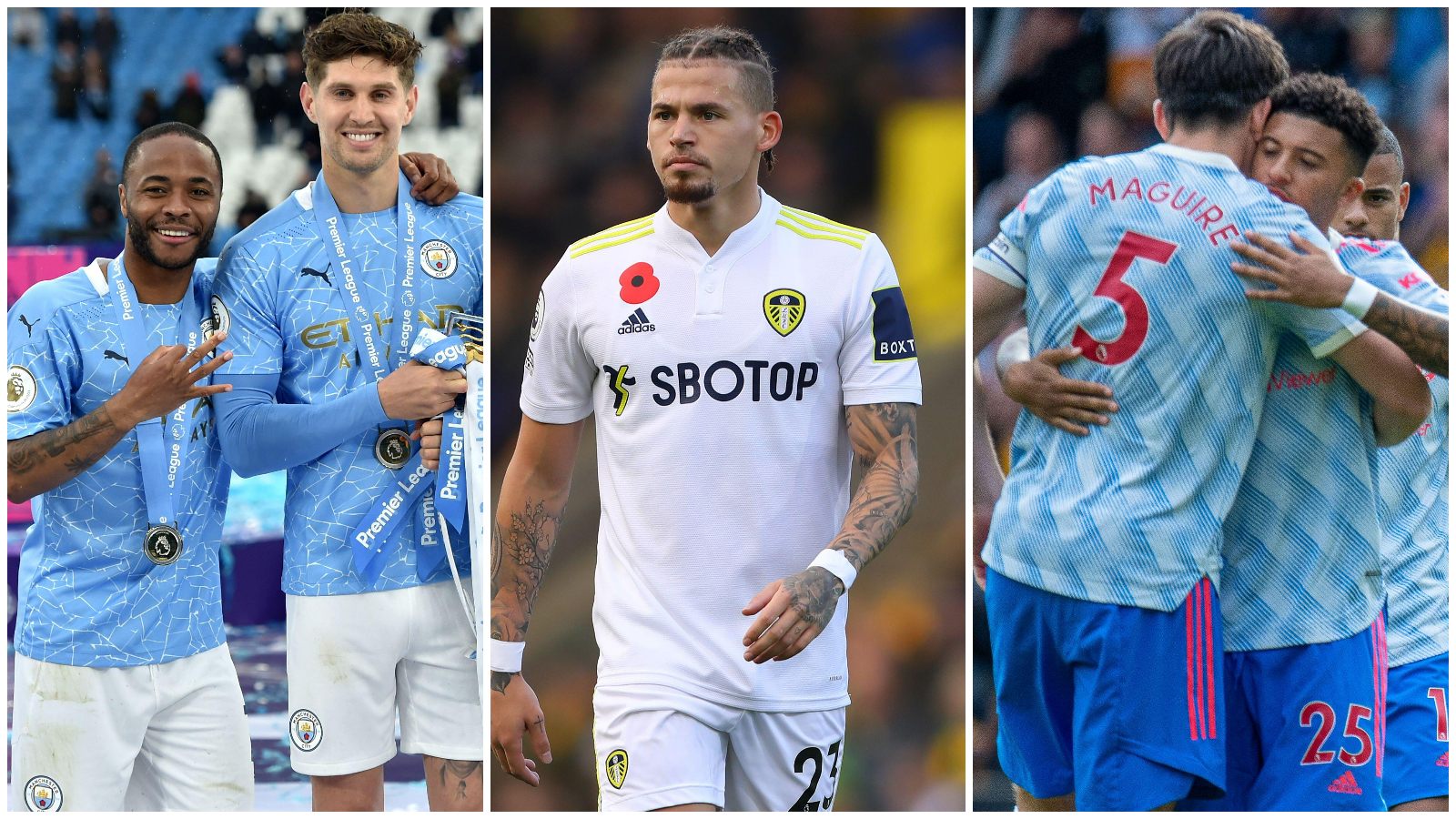 Where will Kalvin Phillips rank among the top ten most expensive Englishmen when he completes his Man City move? Pep Guardiola can only hope the midfielder is as successful as the no.1 in this list…

10) Aaron Wan Bissaka
Manchester United looked at 804 right-backs before deciding Wan-Bissaka was the man for them in 2019. It’s not clear where they watched the other 803…

He cost £45million, with Crystal Palace due another £5million in add-ons, which they aren’t likely to see, unless the bonuses are structured on slide tackles and square passes.

To be fair, United signed Wan-Bissaka when they were in defensive disarray. He helped solidify them – briefly – but it really would have been worth looking at what he could do in the opposition half without a map and a compass before dumping all that cash in Palace’s bank account.

9) Ben Chilwell
The left-back seemed a dead cert when he moved from Leicester to Chelsea for £45million in 2020. And Frank Lampard fancied him. But Thomas Tuchel took some convincing…

Tuchel had Chilwell in and out of his XI through the second half of the 2020-21 season, though it was the England defender who made the team-sheet for the Champions League final last year. He went to Euro 2021 on a high… and was brought back down to earth by Gareth Southgate, who didn’t give Chilwell a minute, preferring instead to use a right-back on the left before Luke Shaw took over.

Then he went back to Chelsea, started the season on the bench and didn’t see any Premier League action until October. When he did claw his way back into Tuchel’s team, he knacked his knee six games later.

8) Harry Maguire
If we are to base this ranking on current standings and public opinion, Maguire would be bottom by some distance. He had a wretched season last term and a mixed one the campaign prior to that following a positive first year at United.

But when you move for £80million as the world’s most expensive defender, patience and sympathy will always be in short supply when you screw up. Which Maguire did last season. A lot.

He wasn’t alone, though, and Erik ten Hag seems to believe, quite rightly, that Maguire isn’t a lost cause. Though he needs to shape up sharpish under the new manager before he finds himself on the same scrapheap as Wan-Bissaka.

7) John Stones
Stones is a streaky mo-fo. Pep Guardiola either loves him, or can’t stomach the sight of him.

He cost City around £50million when they signed him from Everton in Pep’s first summer in charge. His first couple of seasons were hard-going, as most players new to Guardiola find it. There was talk of converting Stones into a holding midfielder, but City persisted with him at the back.

That’s when he wasn’t dropped or injured. Around 2020, Stones was out of the picture for club and country, but then he had another of his bursts of form and won back his place for both. It helped being partnered by Ruben Dias City while having a pre-meltdown Maguire next to him for England.

6) Jadon Sancho
It was widely assumed Sancho would be worth the wait when Man Utd finally got their hands on him last summer. But his early months at Old Trafford were bleak.

He looked a shadow of the player who tore up the Bundesliga with Borussia Dortmund and by Christmas, when he played, he looked terrified to take on a defender. Southgate obviously noticed because the England manager bombed the winger from his squad.

But slowly Sancho settled and emerged as one of the positives of United’s season. Admittedly, it was an almost empty field in which to stand out and Southgate is yet to be impressed, but Ten Hag will have high hopes and expectations of Sancho in his second season with United.

The £100million man seemed desperate not show what he can do, having left everyone in no doubt during his Villa days, but more interested in proving he could fit into Pep Guardiola’s system. Which may well be what the City boss demanded.

But Grealish was rarely close to displaying the kind of form that made Guardiola decide he had to have him a year ago. Most players moving to City take a season to acclimatise to Pep and his methods and, despite the price tag, Grealish deserves some patience. But this year is a big one for the England star, who needs to impress Southgate as well as Guardiola.

Ian King: Jack Grealish is nearly 27 and it’s time to stop talking in terms of potential

4) Benjamin White
The £50million centre-back had his wobbles last season, as did everyone in an Arsenal shirt, but overall, White enjoyed a fine debut season at the Emirates.

He formed a decent partnership alongside Gabriel and proved to be one of Mikel Arteta’s better performers, even if the season ended in a catastrophe.

Presumably, that capitulation in the race for fourth place was fresh in Gabby Agbonlahor’s mind when he said White had been ‘very poor’ for Arsenal and was only in the England squad because of ‘big club bias’.

3) Kyle Walker
Walker has won the title four times in five seasons since joining City from Spurs for £45million, maturing into one of the senior figures for club and country.

The 32-year-old has always been rapid and as he approaches veteran status, he doesn’t seem to have lost a yard yet. But Walker has sussed that he can;t always rely on his pace to get himself out of bother and he’s made big strides as a result.

Southgate still loves him and the England manager says Walker will have a big role to play around the World Cup, despite the Three Lions having seemingly dozens of top-class right-backs to call upon. Whether he plays a back three or four, Walker still finds his way on to the team-sheet.

2) Tammy Abraham
The only player on this list to have moved abroad and what a move it proved to be!

Fair f***s to Abraham for going to Italy when Tuchel made it absolutely clear that he didn’t fancy him at Chelsea. The England centre-forward got the Romelu Lukaku treatment before Lukaku turned up and screwed up.

It seemed like a very good deal for Chelsea when they took £36million off Roma last summer but Abraham settled quickly in the Italian capital and bagged 27 goals in all competitions. Jose Mourinho reckons he’s now unsellable, even if he’s still go this in his locker…

1) Raheem Sterling
Even if it looks like Sterling is on his way out of City this summer, it is worth remembering what Sterling has achieved since joining City while leaving Liverpool under a cloud seven years ago.

Sterling has won four Premier League titles, an FA Cup and four League Cups at City, while Guardiola so often turns to the winger in the big games, even if City feel like they can move on from the 27-year-old.

In the last three seasons, he has had a direct role in 82 goals in 129 games. He was England’s most important player last summer at the Euros. And he’s only now reaching his peak. He’d be a great signing for Chelsea, but we’d rather he went abroad.