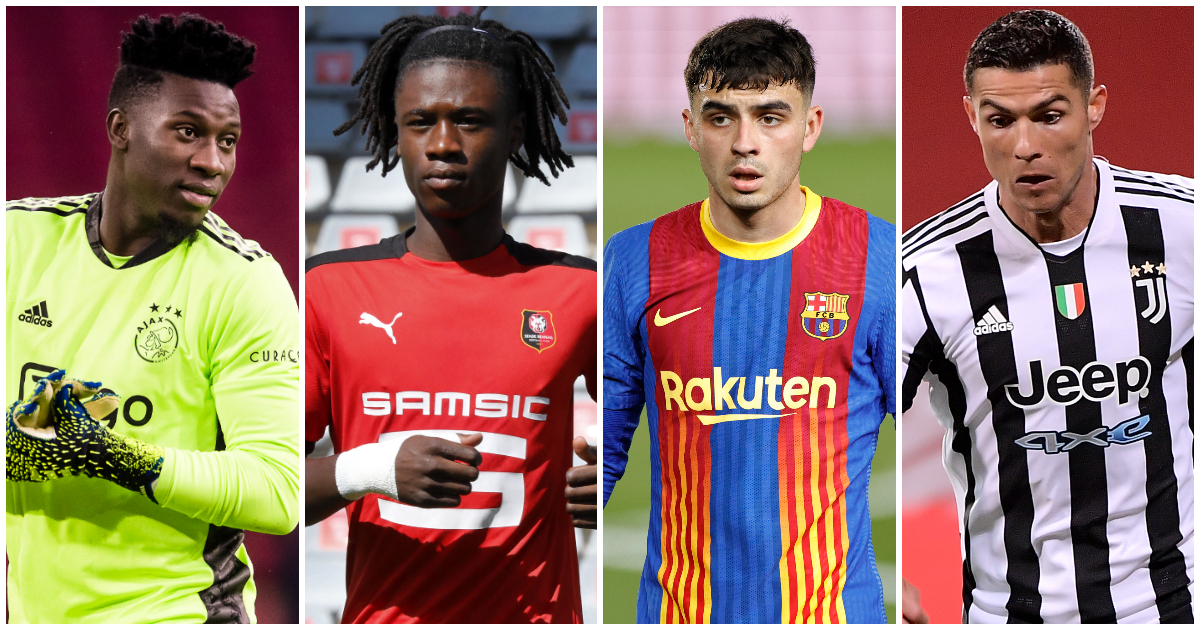 Some of the game’s biggest names have entered the final 12 months of their contracts in the last week. Here is an astonishing XI of stars less than a year from free agency…

Andre Onana
The Ajax goalkeeper looked primed for a big move last summer before Covid started acting the d*ck. Then Onana mistook one of his wife’s pills for aspirin and he sat out last season from February. His doping violation suspension has since been reduced to nine months and the Cameroon keeper will be available to play again from November 4. Arsenal’s interest appears to have faded, while Onana’s intention is reportedly to see out the final months of his contract at Ajax before moving as a free agent next summer.

Sergi Roberto
Three-quarters of this back four could be made up of Real Madrid players, with full-backs Dani Carvajal and Marcelo joining Raphael Varane in the last year of their contracts. But Roberto takes his place at right-back amid a variety of reports over his future. The 29-year-old seems to be mentioned as a makeweight in any deal Barca try to throw together as they look to reinforce their squad amid a financial sh*tstorm. If Roberto does re-sign, it will almost certainly be on reduced terms. At least there is a desire at Barca to keep Roberto. Apparently, they just want rid of Miralem Pjanic and Samuel Umtiti.

Raphael Varane
The France defender reportedly has no intention of signing a Real Madrid renewal, which is exactly what his agent wants us all to think. But it does seem like the Varene-to-United story has legs. The Red Devils need a top-class partner for Harry Maguire, and Varane’s contract situation makes him reasonably priced, even if United and Real remain some way off finding an agreement over a fee. While those talks continue, Varane has reportedly ‘given his word’ to United that he wishes to move to Old Trafford. But so did Sergio Ramos…

Niklas Sule
Bayern’s defence already promises to look very different next season, with Dayot Upamecano coming in to help fill the voids left by David Alaba, Jerome Boateng and Javi Martinez. Julian Nagelsmann will be loathe to lose Sule too. The versatile defender is a year from the end of his current terms and no agreement is yet in place. Chelsea are known to have been monitoring the Germany international’s situation but Bayern are understood to be keen to kick the can down the road by offering Sule a one-year extension.

Marcel Halstenberg
The Germany left-back is ‘more than unlikely’ to re-sign with RB Leipzig before his contract expires next summer and there is interest from within the Bundesliga. Bild reckons Borussia Dortmund are sniffing but are only willing to offer around £7million for Halstenberg while Leipzig are looking for something in the region of £10million to sell before the start of the season. The 29-year-old is a boyhood Dortmund fan and came through the ranks at the club.

Eduardo Camavinga
Rennes have admitted defeat in their attempts to convince Camavinga to renew his deal so the youngest France international in over a century looks set to move on this summer, with his club asking for around £25million. Manchester United appear to recognise the bargain before them and reports suggest the Red Devils have firmed up their interest in talks with the player’s representatives. Real Madrid were heavily linked with Camavinga, as have Liverpool, Arsenal and PSG at various points since the midfielder burst on the scene. But if United have a pathway to a deal, they really should get it done quickly, rather than haggle over a few euros.

Paul Pogba
The prospect of signing ‘the new Pogba’ presents United with the problem of what to do with the old one. Pogba is now in the final year of his contract, with United having already triggered the option they had. The Red Devils must decide now whether to make a few quid on a player not guaranteed a starting place under Ole Gunnar Solskjaer, or fork out a fortune on new terms for a record signing who has failed to show any consistency in any of the positions he has been tried in. If neither Real nor Juventus can afford cash, then the possibility of swapsies should be explored. One thing we know for certain: United will do almost anything to avoid losing Pogba for nothing in a year.

Pedri
One of the few positives around Barcelona has 12 months remaining on his current terms, though the club has the option to extend Pedri’s deal for a further two years. The problem: exercising that option would keep the young star’s buy-out clause at around £70million, which looks like a bargain if his form for Barca and Spain is any measure. So Barca, already broke, would have to give the 18-year-old a fat salary increase to fend off the threat of their prodigious talent being snatched away. Liverpool are apparently keen.

Kylian Mbappe
Mbappe is said to be calm over his contract situation, and why the hell wouldn’t he be? The France star has PSG clamouring to tie him down with a massive pay-rise, while he is one of the few players who could still have his pick of clubs should he got to market in the current climate. Still, PSG aren’t ready to accept that possibility and will price him out of a move until he demands one. Should he resist that temptation, Mbappe will play another year for PSG before moving as a free agent next summer, when clubs will be queuing around the Eiffel Tower to give him what he wants. Though it’s hard to shake the feeling that there isn’t already an agreement in place with Real Madrid. If not, Liverpool will be sniffing, no doubt.

Cristiano Ronaldo
The situation around Ronaldo at Juventus seems to be changing. It was expected the the 36-year-old would move on this summer, with Manchester United and PSG both heavily linked. Juve were open to sending Ronaldo on his way simply to save themselves another year of his huge salary. But the most recent reports suggest that Ronaldo is keen to stick around, with Jorge Mendes pestering them to talk over a one-year extension. For Juve’s part, director of football Federico Cherubini said: “Right now, there are no signals regarding a possible transfer.” Of course, even if they wanted Ronaldo off the books, they couldn’t say so publicly.

Paulo Dybala
Ronaldo’s renewal could have implications for Dybala’s future. The Argentina forward is also approaching the expiry of his current terms and while an agreement over an extension was previously reported to be in place, no deal has been forthcoming. With Ronaldo now apparently keen to stay, keeping Dybala satisfied too may be out of Juve’s budget. Tottenham have previously been linked with the 27-year-old and given Fabio Paratici’s Juve links, it is surely only a matter of time before they are again.