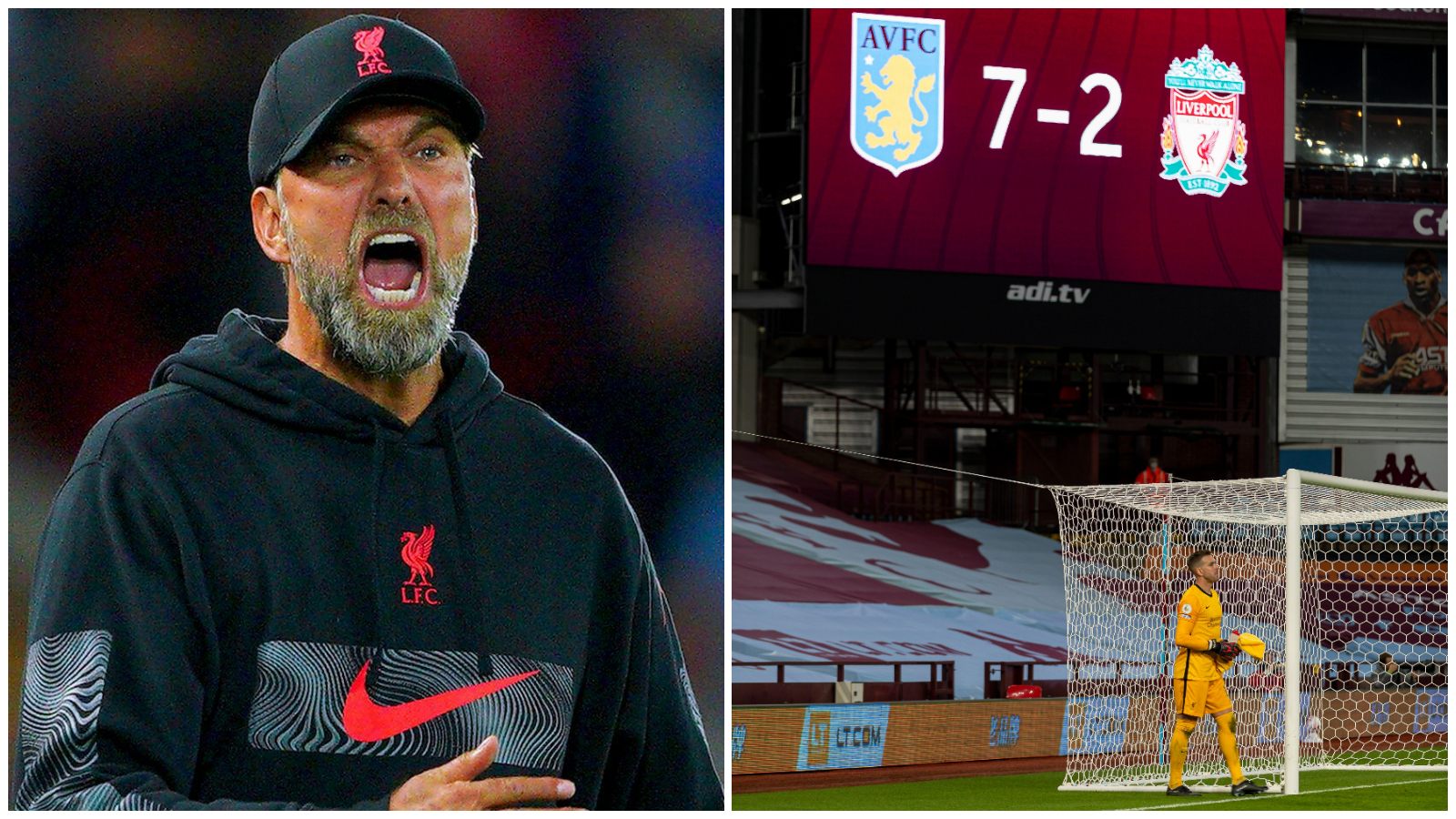 Prior to a humbling defeat at Napoli, Liverpool had lost by three or more eight times under Jurgen Klopp. Too often it got worse before it got better.

Here are those eight heavy defeats and how they responded…

What happened? Some crazy sh*t…

After winning their first three games of the season as champions, beating Leeds, Chelsea and Arsenal while scoring nine goals, Liverpool went to an empty Villa Park on a Sunday night and got absolutely tw*tted by Dean Smith’s Villans. Ollie Watkins scored a perfect hat-trick in the first half and Villa should have had more as the Reds conceded seven for the first time since 1963. Adrian’s presence in nets was just a coincidence, we’re sure…

What happened next? The Merseyside derby…

Liverpool and Everton shared the points after the Toffees twice came from behind to draw 2-2. But the main talking point was Jordan Pickford’s wild challenge on Virgil van Dijk after an offside decision which knacked the centre-back for the rest of the season. Liverpool did not take it well. Van Dijk’s absence cost the Reds; not at first since they went unbeaten for 11 games through to the New Year. But the start of 2021 was a shocker for Liverpool before they eventually regained some composure to finish in the top four.

Klopp out? Tuchel was sacked for less and the Liverpool legacy players look shot

What happened? Sadio Mane kicked Ederson in the face…

“The red card was the game changer today,” said Klopp after suffering what was then his joint-heaviest defeat as a manager – the other being a 6-1 thumping at the hand of Werder Bremen while bossing Mainz. Liverpool were already a goal down when Mane received his marching orders on 38 minutes and they trailed 2-0 at the break. The Reds then capitulated after half-time, conceding three more in their first defeat of the season.

What happened next? Liverpool won only one of their next seven matches, drawing five. Their first game after City was a 2-2 draw at home to Sevilla in the Champions League before Burnley took a point off them in the Premier League at Anfield.

What happened? Who gives a sh*t? It didn’t matter.

Liverpool had just been confirmed as champions for the first time in 30 years and their first game while wearing the crown was a visit to the Etihad. It’s quite possible they were still drunk.

What happened next? Liverpool still had six more games to play after becoming the earliest champions in top-flight history. They beat Villa three days later and Brighton shortly after while winning four of their last six to finish 18 points ahead of City in second and 33 points clear of third-placed Man Utd.

What happened? Five Premier League games after losing by five at City, a record Premier League crowd of 80,827 at Wembley saw Spurs and Harry Kane bully a Liverpool defence that was already at breaking point. Four goals for Spurs took the total to 16 conceded, their worst defensive record after nine games since 1964/65. Dejan Lovren was hooked after half an hour with Liverpool 2-0 down but they looked a mess at the back even after his departure.

What happened next? Liverpool kept three clean sheets in their next four games (albeit against Huddersfield, Maribor and Southampton at home) and went 18 matches unbeaten.

What happened? Liverpool had already lost four of their first eight games in 2021 by the time City came to Anfield on February 7. Phil Foden was as brilliant as Alisson was wretched, with City scoring four times in the second half after missing a penalty. After going 68 unbeaten in the Premier League at Anfield, this was their third successive home defeat.

What happened next? It got even worse.

The Reds lost four of their next five Premier League games, including a first derby defeat at home since 1999. They also lost to Leicester, Chelsea and Fulham.

What happened? The Reds went to the Nou Camp in the Champions League semi-final first leg and suffered at the hand of Lionel Messi. Klopp’s side were arguably the better side, despite going behind to Luis Suarez’s first-half strike. But Messi hit them with a late double-punch including a brilliant free-kick.

What happened next? This.

What happened? Liverpool saw their hopes of an invincible season go up in smoke in the unlikely surroundings of Vicarage Road. Ismaila Sarr’s brace and Troy Deeney’s strike inside 18 second-half minutes brought an 18-match winning run to a shuddering halt.

What happened next? They were Premier League champions three games later. In the meantime, though, they were knocked out of the FA Cup by Chelsea and exited the Champions League after two defeats to Atletico Madrid. Then a pandemic hit and shut down the Premier League for more than three months.

What happened? A week after Klopp forced his players to link arms and salute the Kop following a draw with West Brom in his eighth Premier League match in charge, and a week before Christmas, the Reds went to Watford and dropped more points. Literally in Adam Bogdan’s case. The stand-in keeper’s first top-flight touch slipped from his hands to gift Nathan Ake a second-minute opener. Mamadou Sakho was similarly culpable in the other goals as Liverpool slipped to ninth.

What happened next? Liverpool remained hopelessly inconsistent through the remainder of Klopp’s first season, which resulted in an eighth-placed finish and two final defeats in the League Cup and Europa League.