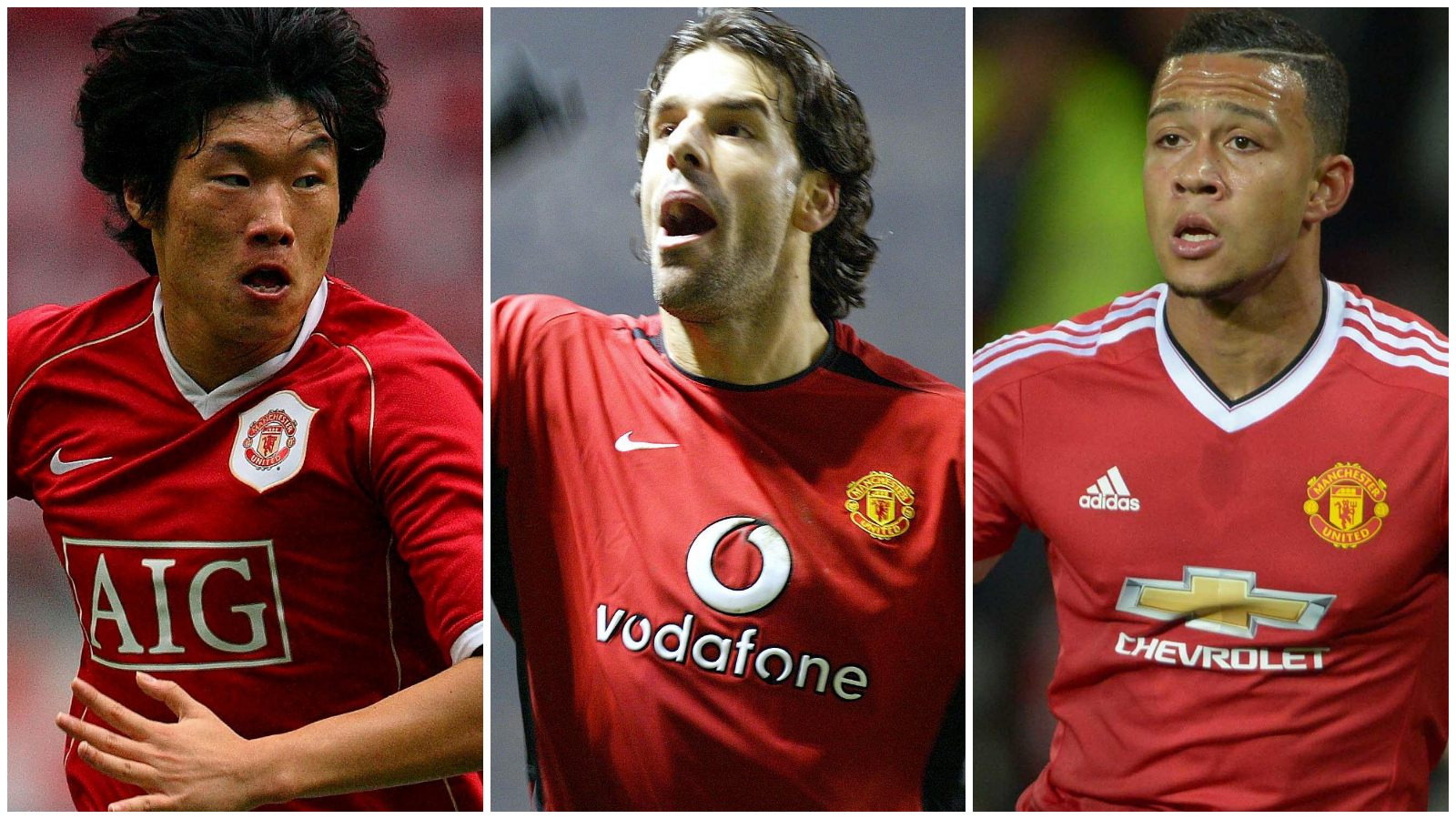 Manchester United look set to import a couple of players from Holland this summer. Buying from Eredivisie hasn’t always worked out for the Red Devils. Here’s how we’ve ranked the eight previous purchases from the Dutch league…

8) Memphis Depay
The winger certainly didn’t lack the confidence to be a success at Old Trafford. What we saw before and what he’s shown since suggests he didn’t want for talent either. But there’s no dressing it up: Depay was absolutely awful for United.

Playing for another Dutchman, Louis van Gaal, didn’t help his cause. After signing for £25million from PSV, Depay had one hugely underwhelming season before Jose Mourinho took over and didn’t fancy him either and packed him off to Lyon.

“Sometimes they can go too early to the biggest clubs where they are not ready to cope with it,” Mourinho explained of Depay. “Where they are not ready to understand that in the biggest clubs there are internal competition, that you can not play all the time. That there are fantastic players to fight with you for a position. They can lose a little sense of reality and become a bit childish. Which is what happened.”

Wayne Rooney would agree with that assessment.

Buttner arrived from Vitesse as their Player of the Season in 2012 to fight with Patrice Evra for the left-back spot, or at least provide some back-up for it. He started well. On his Premier League debut, he scored one and set up another in a man-of-the-match performance against Wigan.

But Evra wasn’t shifting and Buttner was sent on his way two years after arriving, sticking the knife in as he went to Dynamo Moscow. “I want to play in the Champions League and win trophies,” he said after leaving United in sixth. Which is topical.

6) Donny van de Beek
Donny is spared the lowest ranking on this list since he’s still on the books so it could get better for him at United. It really can’t get any worse.

Oh, they’re signing Christian Eriksen you say? So Van de Beek is no longer even the first understudy to Bruno Fernandes. With Eriksen, Fernandes and possibly Frenkie De Jong, even Erik ten Hag will struggle to find a use for a player who ticks the all-important ‘Dutch’ and ‘Ajax pedigree’ boxes.

So it might get better for poor Donny. But it almost certainly won’t.

5) Raimond van der Gouw
Raimundus Johannes Hendrikus van der Gouw was signed by Fergie for half a million quid in 1996 when United needed an understudy for Peter Schmeichel after Tony Coton joined Sunderland.

Not only was the Dutchman a disgustingly-handsome b*stard, he served as very capable back-up for six years. He briefly had a spell as first-choice in 1999-2000 when Mark Bosnich completely f***ed his big chance at United, but Fergie moved for Fabian Barthez the following summer and Van der Gouw was back on the bench.

4) Daley Blind
Blind was bought from Ajax by Van Gaal as a midfielder in the manager’s first summer. But only fleetingly did he get to play that role.

Because Van Gaal couldn’t trust any of the defenders he inherited from David Moyes, Blind was most useful to United as a centre-back. Despite being neither quick nor big, the Holland international made a decent fist of filling holes.

He played fewer than 25 matches in four seasons as a central midfielder, and around three times that number as a centre-back, in addition to almost 40 run-outs at left-back.

Blind was a fine servant and perhaps never got the credit he deserved for as long as he only ever seemed like a stop-gap. It’s a surprise he hasn’t been linked with a return under Erik ten Hag.

3) Ji-sung Park
The only non-Dutchman on this list became one of Fergie’s most trusted lieutenants after joining United for £4million from PSV Eindhoven in 2005.

Park was positioned in Fergie’s midfield for many of United’s big games, especially in Europe, despite the South Korean struggling to earn a regular starting place. In only two of his seven seasons at Old Trafford did he play in half of United’s Premier League games.

Never did Park complain about his level of involvement but when he was left out of five consecutive matches in 2012, he decided to move on. To Mark Hughes’ QPR, which was a terrible idea.

2) Jaap Stam
The big Dutchman might have gone on to be number one on this list. But Fergie f***ed up by selling him far too soon. As he admits: “Jaap Stam was the one. Without question, I made a mistake there.”

Ferguson has explained his thinking that Stam had struggled with injuries and it was felt he had lost a yard of pace. When Lazio offered £16.5million, the manager felt it was right to take the deal and get Laurent Blanc for a year before bringing through the likes of Wes Brown and John O’Shea.

Stam excelled at Lazio and AC Milan, becoming one of the few people to make Ferguson look daft enough for him acknowledge his mistake. Because between 1998 and 2000, the defender was a colossus.

1) Ruud van Nistelrooy
Another one who fell out with Fergie and who was sold sooner than many would have liked. Because for five seasons, van Nistelrooy was one of the best centre-forwards ever to knock ’em in at Old Trafford.

United waited for Van Nistelrooy after his move from PSV initially broke down in 2000, immediately before he broke down with a knee injury. But Ferguson sat tight and Ruud was well worth the wait. He won the Golden Boot in his first season, going on to score 150 goals in 219 appearances in all competitions while winning every domestic honour.

All those goals, however, weren’t enough to swerve Fergie’s ire when Van Nistelrooy ‘became a really difficult boy’ in 2006. The striker clashed with team-mates – Cristiano Ronaldo copping most of the flak – and staff and Ferguson decided he’d had enough. At the end of 2005-06, Van Nistelrooy was away to Real Madrid.

When he reflected a few years later, Van Nistelrooy apologised to Ferguson. His behaviour in his final year, though, hasn’t tarnished his legacy at United. And Johnny Nic loves him.