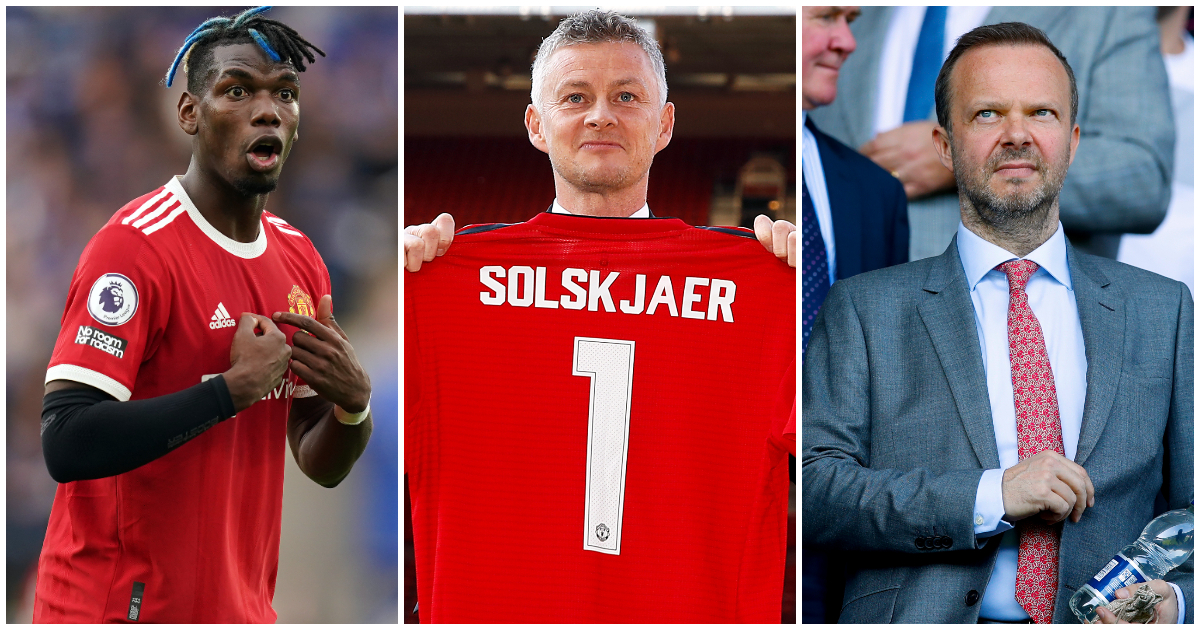 Man Utd have spent most of the last few years treading on rakes. Here are 10 of the biggest boobs during Ole Gunnar Solskjaer’s tough reign.

10) Giving Solskjaer the permanent job
You could argue that it was a mistake in the first instance to give Ole the permanent job, certainly with the benefit of hindsight. But United weren’t the only ones who got carried away after United’s improvement under the caretaker boss was crowned by a stunning fightback to beat PSG in the Champions League. We were guilty of it; Rio Ferdinand and countless other pundits, too. If his caretaker reign was an audition for the full-time gig, there is no doubt that he passed it.

But the decision makers at Old Trafford needed to be colder and more objective before jumping on the Solskjaer train. He was still unproven beyond the borders of Norway and United are hardly the first team to benefit from the new-manager bounce. The Red Devils would have been wiser to wait until the summer of 2019 before making any long-term decisions, by which time they will have seen the novelty wear off for the players in alarming fashion.

9) David de Gea’s contract
One of Solskjaer’s big wins after becoming the permanent manager was to convince De Gea to commit his future to United. At the time, the No.1 was in the final year of his contract which seemed to affect his form towards the back end of the 2018/19 season. But that didn’t deter some of Europe’s biggest clubs from queueing up to take the Spain stopper.

The clamour for De Gea clearly helped his agent’s cause since United coughed up to make the goalkeeper their second-highest paid player. That didn’t seem too daft at a time they were paying Alexis Sanchez an obscene amount to play for Inter Milan but upon reflection, it only added to United’s problems. De Gea is still one of the highest-paid players in the Premier League and his terms remain the reference point for any agent going into a meeting with Matt Judge.

And De Gea can’t claim to have justified his salary or status. His form deteriorated to such an extent that he was made to undergo a season-long scrap with Dean Henderson for the No.1 spot, a fight neither keeper won. The fact De Gea would have been nigh on impossible to sell because of his salary swung the verdict in his favour rather than his performances.

8) Not selling Jesse Lingard in the summer
United’s decision-making when it comes to player sales is too often unfathomable. In Lingard they had a player entering the final 18 months of his contract. Solskjaer clearly did not rate the England international, who then did them a huge favour by going to West Ham on loan and tearing up the Premier League.

It was a gift for United. By the summer, a market developed for Lingard where previously there was none. West Ham were prepared to cough up – just not the price United were quoting. The Red Devils got greedy and it quickly bit them on the arse.

Now they are stuck with an unhappy player who will walk away for nothing next summer after one last year of picking up £100,000 a week from United. Had they sold last summer, they could have put the cash towards Kieran Trippier…

7) Signing Aaron Wan-Bissaka
Signing Trippier was necessary because Wan-Bissaka simply isn’t suited to being a right-back for Manchester United. Or any team who might expect a smidgen of creativity from that position.

United made it known that they looked at 804 right-backs before signing Wan-Bissaka from Crystal Palace for £50million, which is perhaps around 794 too many but it makes you wonder if the lads in the Carrington transfer bunker had simply grown bored by the time they stumbled upon Wan-Bissaka and simply thought ‘f*** it, he’ll do. Pub’.

If Solskjaer needs a slide tackle to be won, then Wan-Bissaka is certainly the man for that particularly niche job. But other aspects of his defending are not up to scratch and the fact he needs a map and compass whenever he crosses the halfway line really should have been picked up on in the scouting reports. His struggles going forward and the absence of a right-winger prior to signing Jadon Sancho – who has played more on the left – have made United woefully lopsided for much of Solskjaer’s reign.

6) Giving Harry Maguire the captaincy
This is another decision which looks worse in hindsight than it did at the time.

Maguire was named club captain in January last year when Ashley Young was heading to Inter Milan. The defender had already been wearing the armband, which also adorned the biceps of De Gea, Marcus Rashford, Nemanja Matic, Axel Tuanzebe and Lingard in the previous weeks, and Maguire’s form coupled with his then-undroppable status as United’s starting centre-back made him the obvious choice at the time.

The fact there was so few other alternatives spoke of the lack of leaders in United’s squad, and the captaincy not long after became a burden for Maguire, who has had plenty on his plate besides. The England defender is a solid pro, the type every dressing room needs, but his teammates have doubted his leadership skills. With Cristiano Ronaldo and Bruno Fernandes better suited to the job, perhaps the new manager might want to take the burden off Maguire and let him get his head straight.

5) Persisting with Paul Pogba
One of Ole’s first moves was to reinstate Pogba to the United side after the midfielder had burned his bridges with Mourinho. Pogba immediately hit a burst of form but, as always with the frustrating Frenchman, it was only fleeting.

That didn’t stop Solskjaer from doing his damnedest to get the best out of United’s No.6 on a consistent basis but for the last two years it’s been a fool’s errand. Here were are, five and a half years after Pogba became United’s record signing and still it is everyone else’s fault why he hasn’t produced.

The time to part with Pogba was in 2019, just one of the occasions he and Mino Raiola have been open about their desire to move on. By the time last summer came around, Covid had ruined the transfer plans of most clubs who might have been able to afford him, so now he will probably leave for nothing in the New Year. Unless United sh*t themselves again and fall at Raiola’s feet.

4) Buying Donny van de Beek
It is not clear whose decision it was to sign Van de Beek last summer, but it damn sure wasn’t Solskjaer’s.

Perhaps the Dutchman was bought in readiness for Pogba’s exit before it emerged there was no market for the Frenchman. But Van de Beek would kill for a fraction of the patience Pogba has been shown in the last 18 months.

Van de Beek’s continued exile became a stick with which to beat Solskjaer and the Stretford End used the midfielder for dissent-by-proxy in the final two games of the Ole era. It is hard to imagine that Van de Beek could have been any worse than United’s other central midfielders and if Solskjaer really didn’t fancy him, then refusing to entertain the thought of selling or loaning out the ex-Ajax star during the summer was yet another weird call.

3) Sticking with Solskjaer in autumn 2020
A little over a year ago, Solskjaer was riding out another spell of intense speculation over his job. In the first week of November 2020, United were 13th in the Premier League table and had just suffered a shambolic defeat to Istanbul Basaksehir – one of the performances and results that ended their Champions League participation at the group stage.

The Red Devils reportedly sounded out some potential replacements but they avoided the chance to act decisively and appoint any of the top-class coaches who were available at the time. Back then, Pochettino was free. Thomas Tuchel, too.

Solskjaer eventually turned things around somewhat, with United going on to finish second in the Premier League. But with a first-rate manager, their season could have been one that ended with silverware instead of a feeling of ‘what if?’.

2) Not moving for Antonio Conte last month
United also dallied last month and missed their window to hire Conte before he went to Tottenham. Which he only did when he grew tired of waiting for the Red Devils to call.

Gary Neville insists United would never hire Conte and he’s probably correct. But that doesn’t make it right. Conte can be a fractious coach, unafraid to rub up the wrong way against his players and board and at Old Trafford there is simply no appetite for that kind of presence, even if it is exactly what the club needs – a manager unwilling to accept slipping standards from anyone around him.

The chances of Conte building a dynasty anywhere are remote, but he would have made a sensible medium-term appointment to put United back on track over the next 18 months. Now, with Conte getting his feet under the table at Spurs, United are looking out at a barren field of available candidates. Acting decisively over Pochettino’s reported willingness to swap Paris for Manchester is surely now their only option.

1) Giving Solskjaer a new contract in the summer
United wasted little time in renewing Solskjaer’s contract in July as he entered the final year of his deal. But there was absolutely no need to be hasty.

There was never any danger of Solskjaer having his head turned, nor any interest from outside Old Trafford in luring the manager away. It must have been the easiest negotiation ever, which is presumably why United did it: to look busy.

The United board were desperate for Solskjaer to succeed, as were the supporters, but persistent doubts remained over his ability to take United on their next step and it was a wholly unnecessary demonstration of misplaced faith.

It is not the first time Woodward has sacked a manager within a couple of months of giving them a new contract – he did the same with Mourinho. Even last month, when Solskjaer and United were under the cosh, they were giving out new three-year deals to Solskjaer’s staff, which will push the final bill way above £7.5million if they eventually dispense with their services once a new manager comes in.