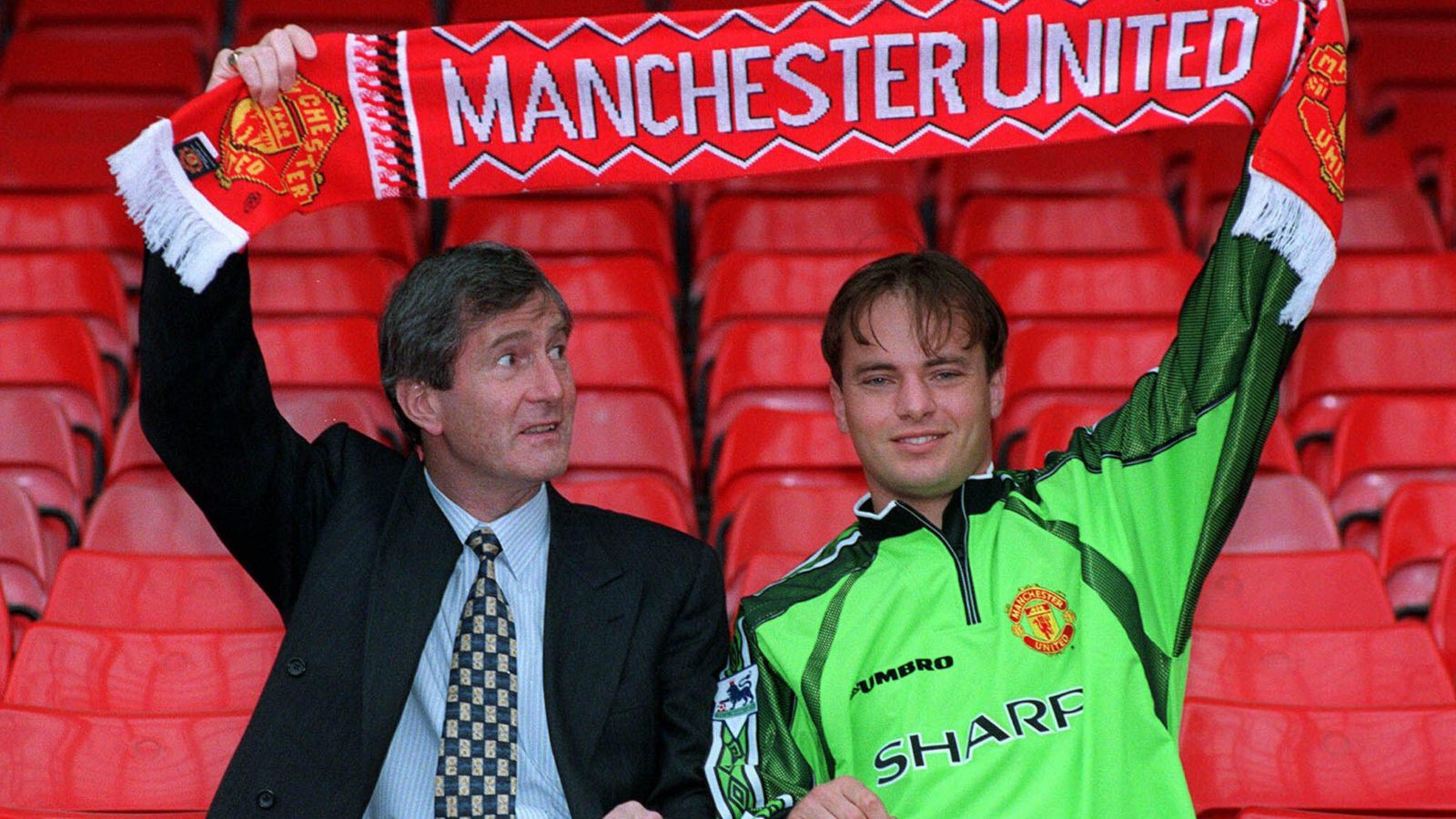 Even for free, this lot were far too costly. The goalkeeper started as he went on by getting lost and being late on his first day at Manchester United…

GK: Mark Bosnich (Man Utd)
Replacing Peter Schmeichel, one of the goalkeeping GOATs, was always going to be a tall order but Bosnich didn’t help himself. After joining from Aston Villa on a free, he was late on his first day, which was a sign of things to come from a player described by Sir Alex Ferguson as “a terrible professional”. And Martin Edwards seemed to realise in the pic above that United had signed a dud. When he wasn’t injured, he was getting stuck into Chinese takeaways. When he did play, his kicking was awful, and this was before goalkeepers were expected to play out from the back. Having come through the ranks at Old Trafford, it’s not as though Bosnich didn’t know what to expect. By the end of the season, Raimond van der Gouw had been installed as temporary No.1 before Fergie signed Fabian Barthez.

“I would like to thank Tony Fernandes, my team-mates and all the staff at QPR and, in particular, the fans that supported the team last season through extremely difficult times.”

It’s not clear if Bosingwa was being sarcastic in his farewell statement to QPR after an agreement was reached to terminate his contract. Because during the year he spent at Loftus Road which ended in relegation – something he appeared to find amusing – he managed to p*ss off the manager, his team-mates and the fans he thanked. Never more so than when the £65,000-a-week defender refused to sit on the bench for a December derby against Fulham. QPR tried to get rid after that episode, but Bosingwa refused to walk for anything less than the £8million due to him for the remainder of his contract. Which is fair enough.

CB: Winston Bogarde (Chelsea)
The former Ajax, AC Milan and Barcelona defender is another who refused to go until Chelsea had paid what they were contractually obliged, which from 2000 amounted to £40,000 a week for four years. For that massive outlay, the Blues got 11 appearances out of Bogarde, who has become the poster boy for sitting out a contract. But the former Holland centre-back also ensured that he kept his end of the bargain, reporting dutifully for training every day for four years, the majority of which Chelsea staff spent wondering: ‘Why the f*** is he still here?’

CB: Sol Campbell (Notts County)
Not strictly Premier League, but that’s the image Notts County were truing to portray when, managed by Sven Goran Eriksson, they signed the former England defender on a five-year contract. He lasted a single game in League Two, a 2-1 defeat to Morecambe, and walked out three days later, with both parties relieved to tear up their agreement.

LB: Andrea Dossena (Sunderland)
One for the ‘forget he ever played there’ files, Dossena was Paolo Di Canio’s 14th signing of the summer in 2013, when the former Liverpool defender joined Sunderland for free from Napoli. He managed six Premier League starts, the second of which saw him red carded in a defeat at Hull. He appeared in five more games in the league, none of which Sunderland won. The Italian was released at the end of the season before he joined Leyton Orient in League One. He left them a few months later in League Two.

RM: Robert Pires (Aston Villa)
Alongside Campbell, Pires is another Arsenal legend who wasted his time on a free transfer – in the Frenchman’s case, to Villa. The winger moved to Villa Park to play for Gerard Houllier in November 2010 but he made just two Premier League starts in a period he admitted was ‘a failure’. “I would not like to end that way so I will play into a 20th season,” Pires said when his contract came to an end, refusing to allow his career to reach such an anti-climatic conclusion. So he went to India to play for FC Goa.

CM: Joe Cole (Liverpool)
Cole was one of two freebies signed in 2010 by Liverpool manager Roy Hodgson – the other being Milan Jovanovic. The Serbia striker flopped hard too but there were far greater expectations of Cole after he arrived from Chelsea on £90,000 a week for four years. He was sent off 45 minutes into his Premier League debut for the Reds before missing a penalty in his next outing. When Hodgson was axed, Cole failed to impress Kenny Dalglish before being shipped off to Lille on loan. Two-and-a-half years into that four-year deal, Cole was given to West Ham for free.

LM: Arnau Riera (Sunderland)
The left winger played with Lionel Messi and Xavi in the B team at Barcelona before moving to Sunderland in 2006. He won the Man of the Match award after coming on as a half-time sub in his league debut, a moment he describes as the highlight of his career. On his first start, he was sent off after three minutes in a 2-0 League Cup defeat at Bury. Then Roy Keane was appointed as manager and Riera was never seen in the Sunderland team again, despite having a three-year contract.

FWD: Michael Owen (Stoke)
Stoke was Owen’s second consecutive free transfer, with the former England striker heading to the Britannia after leaving Manchester United. By then, Owen was finished, having spent most of his career trying to get back to Liverpool, the club where it all started. Under Tony Pulis, Stoke felt a long way from Anfield, with Owen failing to make a single Premier League start as the Potters’ No.10. “I kept asking myself the same question over and over again: how the hell can I not get into this team?” he wrote in the autobiography occupying bargain bins in book stores in Merseyside, Madrid, Newcastle, Manchester and the Potteries.

FWD: Ian Rush (Leeds)
Owen and Rush up front was the forward line of Liverpool dreams once upon time. But, like Owen at Stoke, Rush was finished by the time he rocked up at Elland Road in 1996. Aged 34, he signed for Howard Wilkinson but Leeds replaced the manager with George Graham not long afterwards. That screwed Rush since the plan was to play two years for Wilko before replacing him as manager, with the title-winning boss moving upstairs. Instead, he ended up playing right midfield for Graham before leaving for Newcastle halfway through his contract.

FWD: Nicolas Anelka (West Brom)
Another ex-Liverpool forward, Anelka gave the Baggies nothing but grief when he joined on a free transfer in 2013. Not two months into his deal, the Frenchman walked out of training telling staff he was retiring. The club refuted the reports and Anelka was coaxed back into the fold. He played a dozen games, scoring in only one. While celebrating a brace against West Ham, the former Arsenal, Real and Chelsea forward performed a quenelle, for which he was banned for five games. That was enough for Anelka to announce on social media that he was terminating his contract, before West Brom told he couldn’t quit because he was sacked.