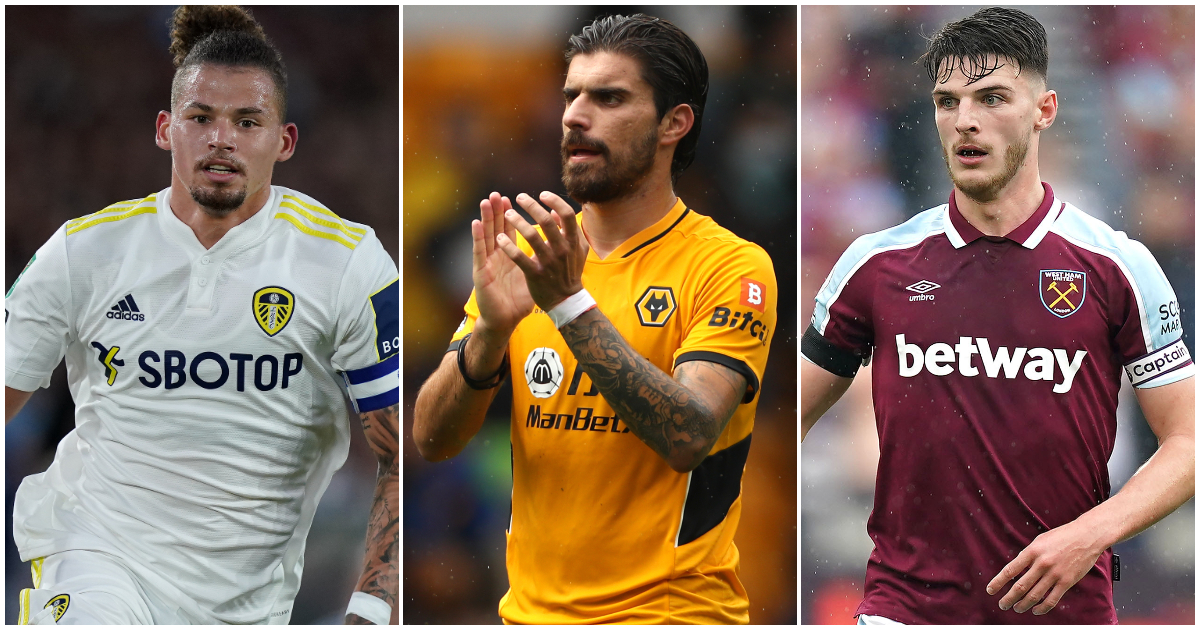 The Gossip suggests they have turned their focus away from Declan Rice towards Kalvin Phillips. Here, we assess the positives and negatives of moving for any of five names the Red Devils have been linked with…

Pros: He’s young and English, which seems to matter to United these days. And, importantly, he’s a very good midfielder – much better than what they currently have.

Rice has established himself as one of Gareth Southgate’s first picks for England with his form last season which he has taken into the new campaign. At the base of West Ham’s midfield, he is third in the Premier League for passing accuracy, with 94.4 per cent of his passes finding a team-mate. Rice is the only Premier League regular in the top five for that metric who doesn’t play for Manchester City.

He is also third for interceptions per game (2.3) among powerhouses like Wilfried Ndidi, Yves Bissouma, and Fabinho. Rice can win the ball and keep it, which sounds simple, but United are so evidently short of midfielders who can do those basics.

Cons: To sign Rice might mean United having to break their transfer record if reports over West Ham’s valuation are true. They wanted £100million in the summer and even with claims they would accept £90million next year, United would have to set a new benchmark for a player who might not get the megastore tills ringing or #numbers soaring. Which is how the Old Trafford board thinks, unfortunately.

Since Rice has about 427 years left on his West Ham contract, the Hammers hold all the cards. And United were said to hold reservations over the midfielder’s mobility, which will be crucial if Solskjaer has plans to play with just one designated screener.

Pros: There would be no such concerns over Phillips’ mobility. Only one player in the Premier League – Everton’s Allan – has applied more successful presses than the Leeds midfielder, and the stats suggest he’s doing it through the thirds.

Phillips would also offer United an attacking dimension they don’t currently have. The Yorkshire Pirlo has a wide passing range but he can also break lines on the dribble. United currently struggle in that area, with Scott McTominay more dynamic on the ball than Fred or Nemanja Matic, but opponents are content to sit of the latter pair knowing they won’t carry the ball and certainly in Fred’s case, he doesn’t possess the eye for a penetrative pass.

Cons: He might be cheaper than Rice but getting him away from Leeds would be far, far tougher.

Phillips is a Leeds lad, raised through their academy. Even if there is any intrigue over a move to Old Trafford on the player’s part, he would have to accept that he would be burning his bridges by crossing the Pennines to join the Red Devils. Many still haven’t forgiven Alan Smith for doing just that in 2004, even when Leeds were absolutely desperate for the cash. With Leeds not able to use that as an excuse, it would be a hugely controversial move in West Yorkshire, one which the club has no appetite for and perhaps neither the player.

Of course, there is always a number. But United have been very keen to make clear that won’t overpay in the market, which is what it would take to even get Leeds to consider selling Phillips to their hated rivals.

Pros: It was a surprise that Bissouma didn’t move on in the summer. The sale of Ben White meant Brighton were not obliged to part with the midfielder but it seems they were prepared for the possibility, with Liverpool, Arsenal and United all linked. Next summer, if not before, Bissouma is almost certain to be available.

And if the price quoted this summer is accurate, he could be a bargain. Apparently, Brighton want £40million for the 25-year-old, which even the United board couldn’t quibble with. Of course, that price could be driven up if his form continues and a battle rages for his signature.

Like Phillips, Bissouma in an extremely strong allrounder. He is mobile enough to screen the Brighton defence, whichever shape it takes, ranking seventh for tackles in the Premier League this season and fifth for interceptions. In possession, especially on the dribble, Bissouma can drag his side up the pitch and opponents out of position. In an era where box-to-boxers seem to have been binned for 6s or 10s, Bissouma is something of a throwback.

And he is certainly seems confident enough to carry the burden of manning United’s engine room. “I don’t want to be arrogant, but it’s me because in my head I am working to be the best,” he replied when asked by the BBC who was the Premier League’s best midfielder. “So I cannot say another name, I know in the Premier League there are so many good midfielder, but for me, it’s me because that gives me the confidence and the energy to work hard to show people I am here and I am Bissouma.”

Other than that concern, should United see it as one, it is hard to see why Bissouma should not be a primary target for United in 2022.

Pros: He’s FREE! Or at least he will be next summer should he continue to ignore AC Milan’s attempts to convince him to renew his contract at the San Siro.

Of course, United will be drawn to a bargain, which he would still be in January if Milan decide to take their last opportunity to claw back a few euros before Kessie becomes a free agent.

To lose Kessie would be a huge blow to Milan. The Ivorian has emerged as one of Stefan Pioli’s leaders over the last 18 months and was arguably Milan’s player of the year last season.

Since moving to Milan in 2017, Kessie has improved in an attacking sense – he was already a physical force at the base of Pioli’s midfield – and his passing stats compare favourably with the other four contenders.

Cons: The concern with importing midfielders to the Premier League is always how long they might take to adapt. At least with the others on this list, they have a proven track record in the hustle and bustle of the English game.

Defensively, Kessie made fewer tackles and interceptions per game last season compared to the other contenders, though that might be attributed to the fact Milan spent much of the Serie A season flying high. He was also dispossessed more often per game than the others.

Pros: The Wolves midfielder is a greater attacking threat from deep than any other player on this list.

Neves has played considerably more key passes, long balls and through balls per game as well as possessing one of the best long-range shots in the Premier League. The Portugal star would offer United a dimension they simply do not possess at the base of their midfield right now.

Defensively, Neves’ tackling can go under the radar but his stats compare well with Phillips’ and better Rice’s.

Neves is also likely to be available for a reasonable fee – £35million was mentioned in the summer – and Bruno Lage admitted “every player has a price”.

Cons: Does Neves have the pace and mobility to play as a single pivot?

The 24-year-old has creativity in abundance but United don’t want for that – or they shouldn’t. A defensively-minded stopper has to be the priority and Neves would not be classified as such.

Neves would offer United a great deal, but perhaps not what they need the most.