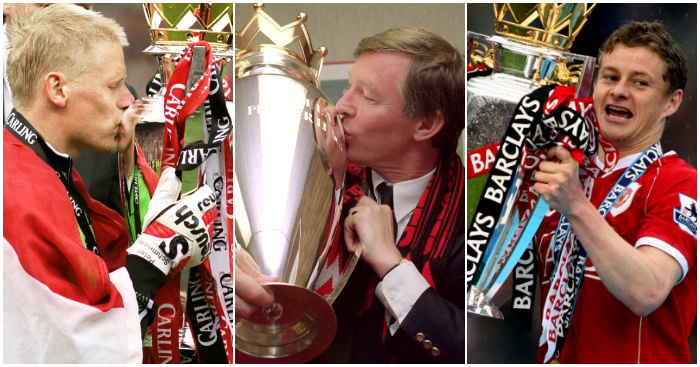 Few fancied Manchester United to mount a title challenge. Actually, John Nicholson did. But almost no-one else outside Ole Gunnar Solskjaer’s family thought the United boss could guide this squad to the Premier League summit.

If they remain there come May, where will the achievement rank among these, United’s greatest Premier League title triumphs?

5) 2002/03 – Making light work of ‘Ferguson’s greatest challenge’
Not for the first time, this was a triumph provoked perhaps in part by Alan Hansen.

Ferguson was ‘facing the greatest challenge of his career’ wrote the former Liverpool defender in his Telegraph column in September 2002. They had not long since lost the title to Arsenal, finishing third behind Liverpool too, and already trailed the Gunners by six points early in the season. Fergie’s response?

Ferguson justified his standpoint by guiding United to the title with five points to spare, though the Red Devils spent much of the season in the slipstream.

By March 2003, Arsenal’s lead stood at eight points. But United had been going through the gears after the turn of the year. Having lost five games in their first 20, they never tasted defeat again after Boxing Day, eventually overtaking Arsenal in April, going on to seal the title while Ruud van Nistelrooy smashed in 13 goals down the eight-game final stretch.

Johnny Nic: If you say Van Nistelrooy was a tap-in merchant, we can’t be friends

4) 2006-07 – Overcoming Mourinho’s Chelsea
Jose Mourinho, ‘a Special One’, was after a hat-trick of titles while Ferguson was already three seasons without one – at no other point after his first did Fergie fail to claw back the title at the first attempt after it had been lost.

Since Ferguson’s last triumph, Wenger’s Arsenal had become Invincibles while Mourinho’s Chelsea had set a blistering new points record for the Premier League. But despite the work taking longer than Fergie’s previous rebuilds, by 2006, United had put together a side ready to wipe the smug grin off Mourinho’s chiselled face.

It didn’t feature Van Nistelrooy. United’s deadly Dutchman, the previous season’s leading scorer, had been sold to Real Madrid while Ferguson put his faith in Cristiano Ronaldo and Wayne Rooney, who many felt would struggle to play together after the former got the latter sent off at the World Cup.

A six-point triumph set United on the road to Moscow and a third European Cup a year later while Mourinho was gone within four months. The significance of their 16th title wasn’t lost on Fergie.

“This title is the team’s greatest achievement to date simply because it is a relatively new team and really it’s their first attempt at winning a title together,” he said. “That’s why we’re all encouraged. I think this team will get better.”

3) 1998/99 – The Treble, Part I
United had ceded the title a year previously to Arsenal and the subsequent battle to regain it was one of Ferguson’s hardest fought.

Because it formed one third of the Treble, United’s achievement in coming out on top of Wenger’s Gunners is often overlooked. But Fergie’s side, strengthened from the previous year’s disappointment by the arrivals of Dwight Yorke and Jaap Stam, had to demonstrate unparalleled relentlessness to edge over the finish line, with a point being the only difference between United and Arsenal as the race went down to the last whistle.

Chelsea lost only three games all season to finish only four behind the champions but that too has been largely forgotten because United and Arsenal lost only once between them after Christmas, with the Gunners’ defeat at Leeds in the penultimate game of the season proving pivotal.

In a season of unprecedented glory, perhaps one moment stands out above all the others for importance: Peter Schmeichel’s last-minute penalty save from Denis Bergkamp in the FA Cup semi-final replay after the two sides had spent 210 minutes hammering away at each other. If Bergkamp had netted, Ryan Giggs would not have scored the greatest goal in FA Cup history and it would have been Arsenal with the impetus in the final weeks.

But, instead, it gave United further reason to believe and the six weeks that followed will arguably never be bettered. They edged over the line in the title race, brushed Newcastle aside in the FA Cup final, before needing every ounce of faith garnered from a bruising title battle to overcome Bayern Munich once more at the death.

“You can’t win anything with kids… the trick of winning the championship is having strength in depth, and they just haven’t got it.”

Alan Hansen won’t ever be allowed to forget those words uttered after United had been turned over 3-1 at Aston Villa on the opening day in 1995.

Few outside Old Trafford argued at the time. United, fresh after blowing up in the title race and losing the FA Cup final, had sold Mark Hughes, Paul Ince and Andrei Kanchelskis, with Eric Cantona suspended until October, replacing them with youngsters from within.

But after that opening defeat when they were also ravaged with injuries, United didn’t lose again until November and from matchday four, they spent all but four games in the top two. Which would have been seen as a highly-creditable finish in a season of transition, especially while Newcastle were steamrolling their way to the title.

Ferguson, though, sniffed Kevin Keegan’s naivety and his young side, still littered with experience and title-winning pedigree, turned the screw on Newcastle until the Magpies blew up. United overcame a 12-point January deficit to leapfrog Newcastle with six games to go.

A first title for the Class of 92 and a second Double in three years highlighted United’s dominance. Ferguson proved that it is possible to remain successful while in transition, laying the foundation for the Treble three years later.

1) 1992/93 – Fergie’s first
You never forget your first and Fergie’s maiden Premier League title win provided the platform for everything that followed.

United had waited 26 years for their eighth title and the drought had become a millstone around the neck of everyone at Old Trafford. Five managers had tried since Sir Matt Busby stepped down in 1969, two years after his last top-flight title, and none had come as close of Ferguson in 1992.

United bottled it then, allowing Leeds to take the last First Division championship, intensifying doubts whether United would ever win the title again. Their start didn’t help. A third of the way into the season, United lie in 10th place, before Ferguson found the catalyst for a title surge: Eric Cantona.

Like this season, they hit the front for the first time in early January. Only once then did they surrender the summit as they fought off the challenges of big six rivals (*checks notes*) Aston Villa and Norwich.

The 10-point margin of victory doesn’t reflect the intensity of the race down the final stretch. “Excuse me Mr Ferguson, you are the champions. Oldham have won at Villa,” the United boss was told as he spent a Sunday afternoon on the golf course while Villa were losing their final home game of the season to crown the Red Devils.

“It was like a huge burden had been lifted from the fans,” said Gary Pallister. “At last, after 26 years, United would no longer be ridiculed as the massive club that couldn’t take the title.”

Ferguson agreed, while warning United’s rivals of what was to come: “It’s very difficult to say that you’re going to dominate football, but I think we will be there all the time now.”