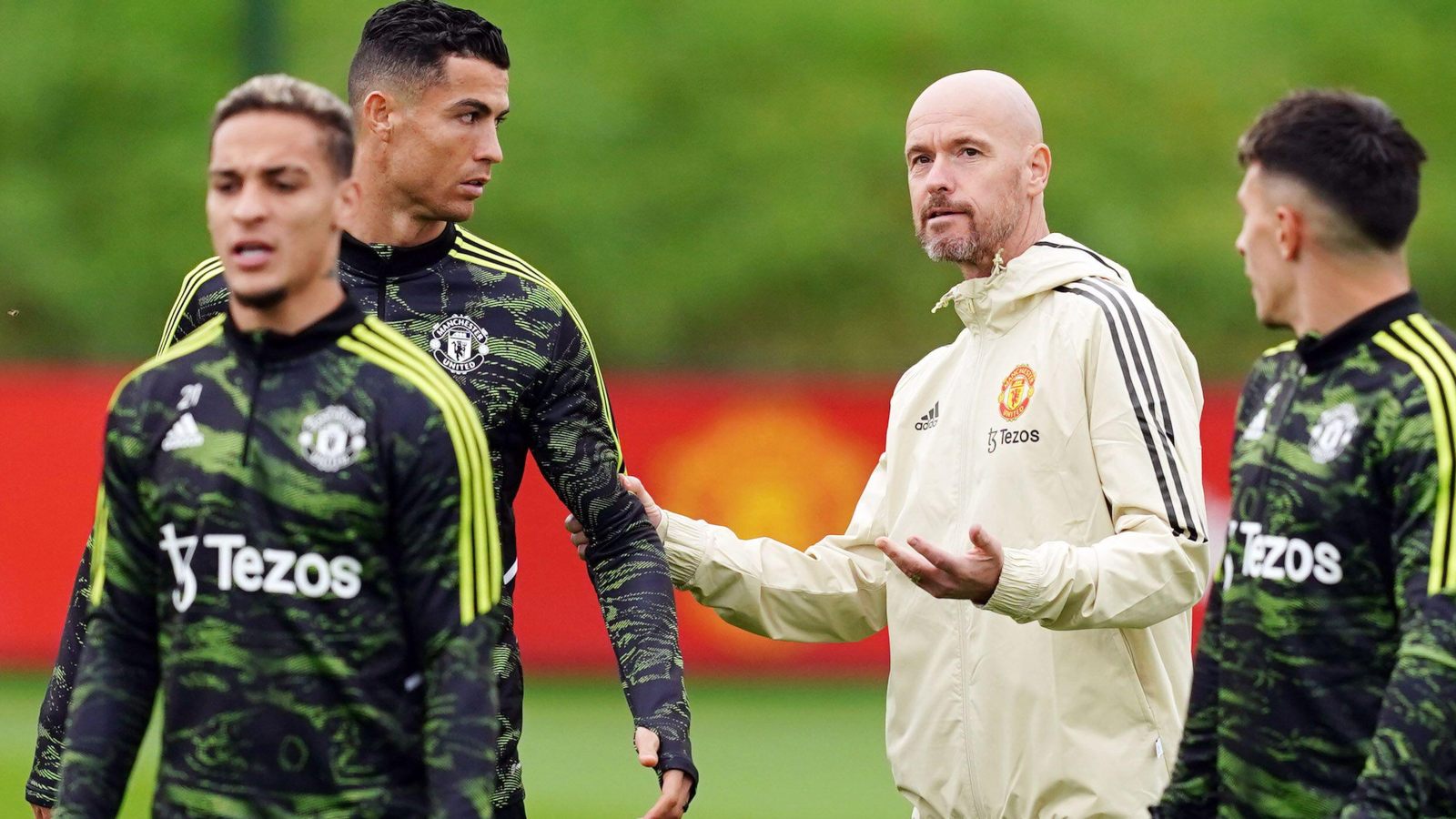 We’ve tried to put ourselves into Erik Ten Hag’s bald head and ranked the Manchester United squad by how important they are in the manager’s mind. The biggest faller will come as no surprise…

22) Aaron Wan-Bissaka (April: 16; July: 23)
Has played four minutes all season and hasn’t been in a squad for the last four weeks. Admittedly, United have barely played in the last four weeks, but still. Moves up a place only because fewer players feature in this ranking.

21) Donny van de Beek (April: n/a; July: 18)
Poor Donny. Many thought Ten Hag would give Van de Beek the odd chance simply on the basis of their history. Alas, no. Hasn’t been seen since four minutes off the bench at the end of the Liverpool win on August 22.

20) Martin Dubravka (new entry)
Important as far as every team needs a stand-in stopper. Might he push De Gea for the no.1 spot? Highly unlikely, unless the Spaniard suffers a catastrophic loss of form. Which is again highly unlikely in contract renewal season.

19) Anthony Elanga (April: 12; July: 19)
Ralf Rangnick liked him because he did what he was told. Getting into Ten Hag’s good books has been considerably tougher while the rest of the squad is tuned into the manager. His versatility is useful but Antony’s arrival and Anthony Martial’s return will severely restrict Elanga’s involvement. January loan looming?

18) Victor Lindelof (April: 13; July: 17)
Unlikely to be happy with being fourth-choice centre-back, but probably even unhappier at being summoned from the bench to deal with Erling Haaland in the derby. Ten Hag needs Lindelof around while his French centre-back remains injury-prone and his English one goes through an existential crisis.

17) Cristiano Ronaldo (April: 2; July: 14)
Ten Hag initially wanted Ronaldo to stay when the 37-year-old first floated the idea of leaving but, ever since, the whole issue has become a distraction. Ronaldo will be allowed to leave in January, with Ten Hag now certain he doesn’t get in his first-choice forward line.

16) Harry Maguire (April: 8; July: 5)
Ten Hag spoke of his belief in Maguire in pre-season and he continues to profess his faith in the United captain. But actions speak louder than words. Maguire was dropped after Brentford and remains third-choice centre-back. Which is a concern since the skipper isn’t the type who can find his flow with only sporadic action.

Man Utd squad ranked on how important they to Ten Hag: Upon appointment | During pre-season

15) Fred (April: 7; July: 11)
Ten Hag spoke of the possibility of finding a deep-lying midfielder within his squad if Frenkie De Jong couldn’t be prised from Barcelona. Which came to pass, but it was Christian Eriksen who he was talking about, not Fred. Ten Hag tried Fred and Eriksen together before quickly realising that his engine room was susceptible to the lightest of breezes. Likely to be relegated to fourth-choice central midfielder when the covers are taken off Casemiro.

14) Luke Shaw (April: 10; July: 15)
Started the season almost by default before being hooked at half-time of the Brentford debacle. Firmly second-choice since but Ten Hag may be wavering after Malacia was withdrawn at the break in the derby.

13) Anthony Martial (April: n/a; July: 4)
Whether or not he deserved to – he didn’t – Martial started the season as Ten Hag’s first-choice striker. Then, to absolutely nobody’s surprise, the Frenchman was sidelined through injury. Now he’s back, Martial is likely to get yet another chance to establish himself as United’s leading striker. Will he take it? Almost certainly not.

12) Scott McTominay (April: 6; July: 13)
‘McTominay has plenty to do to avoid becoming a squad player,’ we wrote in July and that probably remains the case. But the Scot has started six of United’s seven Premier League games, the last four for which Casemiro has been available. Ten Hag could use the derby battering as his chance to bring the Brazilian into his XI at McTominay’s expense.

11) Diogo Dalot (April: 11; July: 10)
The Portuguese has seized his chance under Ten Hag – or rather, he hasn’t blown it. You get the feeling that Ten Hag would still rather strengthen at right-back but Dalot’s performances mean it is rather less of a priority, even if he has little cover to speak of.

10) Tyrell Malacia (April: n/a; July: 9)
Ten Hag’s first signing played more minutes than anyone else in pre-season but still started on the bench. Since coming in to the team at Shaw’s expense, Malacia has shown real potential, along with some understandable naivety. Probably remains first choice if Ten Hag had to pick an XI tomorrow to save his life but needs to develop some consistency if he is to keep Shaw out long-term.

9) Marcus Rashford (April: 9; July: 8)
The Premier League’s Player of the Month for September looks like he’s starting to enjoy his football again. Or at least he did before the derby. The problem for Rashford, though, is the competition for his preferred place on the left. Sancho has been playing there since Antony’s arrival, pushing Rashford through the middle. We remain to be convinced that he can be United’s long-term centre-forward.

8) Jadon Sancho (April: 3; July: 7)
‘It was always a puzzler why United played Sancho on the left so often last term and, hardly surprisingly, the £72million signing has flourished on the right in pre-season,’ we wrote in July. Then Antony arrived and back to the left Sancho went. Not ideal. There are encouraging signs at the start of his sophomore year but Ten Hag needs more than glimpses.

7) David De Gea (April: 5; July: 6)
Undisputed no.1 – for now. Is he Ten Hag’s type? Almost certainly not. He doesn’t leave his line nearly often enough and while competent with the ball his feet, the manager would prefer a keeper capable of breaking a line or two. Until he can source one, De Gea remains snug in United’s sticks.

6) Raphael Varane (April: 4; July: 12)
Ten Hag gave Maguire his chance early in the season before he had no choice but to bring in Varane after Brentford. And since then, the France star has looked more like the defender that won five Champions League medals with Real Madrid. Until he came up against Haaland and broke down yet again. Undeniably first choice but yet to prove himself as trustworthy to Ten Hag.

5) Casemiro (new entry)
Once it became clear to United that De Jong wasn’t keen – seemingly weeks after everyone else sussed it – then United went big for Casemiro. We’ve yet to see why because he hasn’t started a Premier League game yet. Which some can understand even if Rafael van der Vaart can’t. But now, after the dismal derby, is surely the time to get Casemiro in the team. Otherwise, what was the point? He’s hardly a rookie.

4) Antony (new entry)
Ten Hag stuck to his guns over Antony, even though it meant United paying more than they felt comfortable with. They explored cheaper options but the manager insisted the Brazilian would be value for money. And the very early signs are encouraging. Currently the only member of the forward line guaranteed his place.

3) Christian Eriksen (April: n/a; July: 3)
Eriksen isn’t De Jong but he’s making a decent fist of being the bloke who assists the assister. It took a couple of games for Ten Hag to suss how best to use Eriksen – a false nine he is not – but the Dane has forged a good partnership with McTominay at the base of United’s midfield. Now to see if he can do the same with Casemiro, but his passing has unquestionably given United a new dimension.

2) Bruno Fernandes (April: 1; July: 2)
‘United’s best and most important player’ we wrote in April. Come July, Fernandes had dropped to second-most important, only on account of how badly the defence required fixing. Is Fernandes currently more important than Eriksen? Arguably not. Indeed, Eriksen has made Fernandes’ job easier by allowing him to stay up the park rather than dropping deep constantly to find the ball McFred too often couldn’t give him. Not being quite as busy has made him less eye-catching but he remains United’s most creative force.

1) Lisandro Martinez (April: n/a; July: 1)
One of two automatic picks in Ten Hag’s back four and the other, Dalot, is only so because there is no alternative. Martinez has been superb since arriving in the Premier League despite his critics having you believe he’s 5ft 4in. Couldn’t shackle Haaland on Sunday but show us who can. He was no.1 in July before his Premier League debut and, as a left-sided centre-back, he remains Ten Hag’s most important player.

It’s no coincidence that the top two on this list were allowed to give the rest a rollicking on Sunday.