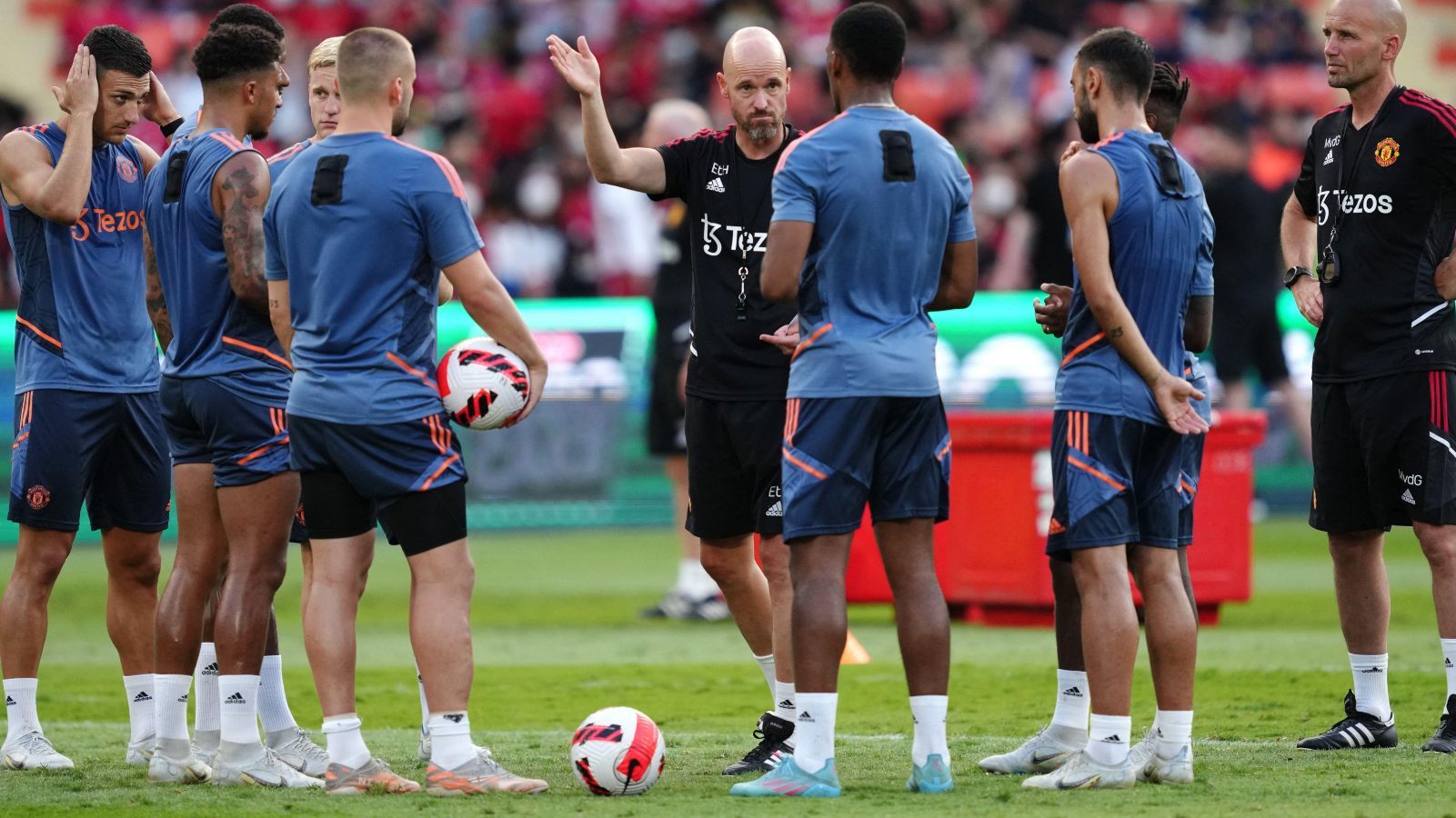 One of Man Utd’s new boys is perhaps the most important player in Erik ten Hag’s mind. That’s until he gets his hands on Frenkie De Jong, if he ever does…

Back in April, we ranked the then Manchester United squad on where the individuals stood in Erik ten Hag’s thinking. Now the new manager has seen his players first hand and made some signings (not as many as he would have liked) while waving off those who’ve departed, we’ve reassessed where the players might be in Ten Hag’s mind.

We’ve not included the youngsters on the tour because the likes of Zidane Iqbal and Charlie Savage are all in a similar position of trying to prove themselves worthy of inclusion in the first-team squad. As for the senior lads…

24) Phil Jones (previous position: 19)
Not even on the pre-season tour so certainly not in Ten Hag’s thinking.

23) Aaron Wan-Bissaka (16)
Still toast, even if United are yet to sign another right-back.

22) Eric Bailly (20)
The inexplicable Ivorian has done well in pre-season, with one run against a half-arsed Liverpool side the highlight. But this is what Bailly does: teases us with some promise before doing something deranged. Ten Hag won’t rely on him, but seeing as he isn’t as keen to leave as perhaps he ought to be, Bailly could stick around to break out in emergencies.

21) Alex Telles (15)
Being left-footed, the Brazilian seems to have had one job in pre-season: pretend to be Lisandro Martinez. Once Ten Hag has no use for Telles’ imitation act, it’s hard to see where the full-back gets regular minutes, especially in the wake of Malacia’s arrival.

20) Hannibal Mejbri (14)
Included in this ranking when other youngsters were not only because he was listed in April’s edition for the simple act of kicking a couple of scousers. But Ten Hag, quite rightly, is looking for a little more and the youngster hasn’t had much opportunity to show it in pre-season.

19) Anthony Elanga (12)
Ralf Rangnick liked him because he did what he was told. Getting into Ten Hag’s good books will be considerably tougher, especially while the likes of Rashford and Sancho are keen to impress rather than ignore.

18) Donny van de Beek (NE)
Ten Hag views Van de Beek as an attacking midfielder and if Eriksen generally plays a little deeper, the ex-Everton loanee could serve as Fernandes’ stand-in. Van de Beek won’t get any favours from his old Ajax boss so he needs to seize what few opportunities he receives in pre-season and the early part of the new campaign.

17) Victor Lindelof (13)
Our view of Lindelof’s prospects in April: ‘Likely to be relegated to fourth centre-back by the time the new season rolls around. Ten Hag will most likely be as content to have trouble-free Lindelof in his squad as he would be to see him leave.’ Yeah, still that.

16) Tom Heaton (17)
Unless United sign a new back-up keeper to replace Henderson, Heaton is just a De Gea knack away from being United’s No.1.

15) Luke Shaw (10)
‘Shaw’s standing in the Man Utd squad only ever feels 10 minutes from lurching dramatically in the opposite direction…will start Ten Hag’s reign as first-choice by default,’ we said in April. Malacia’s arrival changed all that. The left-back has another fight on his hands.

14) Cristiano Ronaldo (2)
A lot has changed since April. Ronaldo wants out and United, as much as we can read into pre-season, aren’t missing him. If he stays, Ten Hag can only hope that being custard-pied by Champions League clubs has humbled Ronaldo enough to chase the ball a bit. Assuming the top scorer gets into United’s attack ahead of Anthony Martial, which would have been a ludicrous thing to write a few weeks ago.

13) Scott McTominay (6)
Perhaps the half of McFred with most to prove in pre-season, especially since he has been playing in a more advanced role that may be earmarked for Eriksen. A flawless 45 minutes during which he didn’t misplace a pass or lose a tackle against Palace won’t have harmed his cause, but McTominay still has plenty to do to avoid becoming a squad player.

12) Raphael Varane (4)
We assumed the France star’s class would eventually shine through but, instead, his fitness issues have continued into pre-season and Ten Hag cannot yet be convinced that Varane can be relied upon. Given Martinez will start and the manager seems to fancy Maguire, Varane could spend more time on the sidelines, even when he is fit.

11) Fred (7)
The Brazilian has been playing the deeper role in midfield, the position Ten Hag has earmarked for Frenkie De Jong. But since the Barca midfielder seems to have no intention of moving to Old Trafford, Fred could benefit. Ten Hag has spoken of the possibility of finding a deep-lying midfielder within his squad if De Jong fails to arrive. It will be interesting to see what the manager has planned for Eriksen but, as things stand, Fred looks likely to be an important player for Ten Hag.

10) Diogo Dalot (11)
United appear to have prioritised strengthening at left-back more than on the right, despite Wan-Bissaka’s limitations. With little sign of a new arrival and United’s priorities elsewhere, Dalot has a decent opportunity to establish himself and, in pre-season, the Portuguese defender has shown both the willingness and capability to adapt to Ten Hag’s specific demands.

9) Tyrell Malacia (NE)
With Shaw, Telles and Brandon Williams, United didn’t want for depth at left-back, but Ten Hag obviously felt they lacked quality, hence Malacia’s arrival as his first signing. The new boy has played more minutes in pre-season than any of his rivals and looks a good bet to start the season.

8) Marcus Rashford (9)
Rashford appears to be rising to the challenge of bouncing back from what was an utterly dreadful campaign last season. A first full summer of rest in God knows how long will certainly help, as seemingly does playing in his preferred position on the left. Though Antony’s arrival, if he ever comes, could see Rashford pitted against Sancho for that flank.

7) Jadon Sancho (3)
It was always a puzzler why United played Sancho on the left so often last term and, hardly surprisingly, the £72million signing has flourished on the right in pre-season. Sancho seems to have formed a good relationship with Diogo Dalot, though United’s pursuit of Antony threatens to hamper the England star’s prospects.

6) David De Gea (5)
Before taking over, Ten Hag reportedly had some concerns about De Gea’s suitability to his system, and there’s no doubt the keeper will have to show more willingness to leave his goal-line under the new boss. But De Gea remains undisputed No.1, with United only minded to bring in a back-up now Dean Henderson has been dispatched to Forest for the season.

5) Harry Maguire (8)
Asked if the much-criticised captain will be a first-choice player, Ten Hag said: I think so. “He’s proved in the past but he also has to prove it in the present and n the future.” Maguire seems likely to get the opportunity to prove himself to Ten Hag, most likely by switching to the right side of United’s central defence.

4) Anthony Martial (NE)
If United don’t sign a striker, which looks unlikely, then Martial is set to get yet another chance to pull his finger out. Whether he deserves it is up for debate and serious doubts persist of whether he can take it. But, as it stands, Martial will start the opening game of the season and if he continues his goalscoring form, the place is his to lose. Which, at some point, still feels inevitable. He does this.

3) Christian Eriksen (NE)
We must wait to see what Ten Hag has in mind for Eriksen and we have to assume he has been given some assurances over his role since he turned down the chance to stay at Brentford where he was happy and certain of his place. But whether he plays deeper or in an advanced role, Eriksen’s quality and temperament will be crucial as Ten Hag tries to alter United’s style from whatever that was to something more possession-based.

2) Bruno Fernandes (1)
‘United’s best and most important player’ we wrote in April and though it wasn’t a crowded field then, not much around Fernandes or new attacking signings has changed that. Sure, Eriksen will be breathing down his neck, but the Dane could play deeper in the same side as Fernandes. And the competition, as well as the new manager, should see the new No.8 strive for greater things as United’s string-puller. Just don’t expect him to change too much.

1) Lisandro Martinez (NE)
The new arrival from Ajax is arguably United’s only guaranteed starter in Ten Hag’s back four. Being left-sided, he offers something no other central defender can. Ten Hag has already spoken about the importance of that, in and out of possession. The manager is already more familiar with Martinez than any other player in his squad and United would not have spent big money to sit him on the bench.