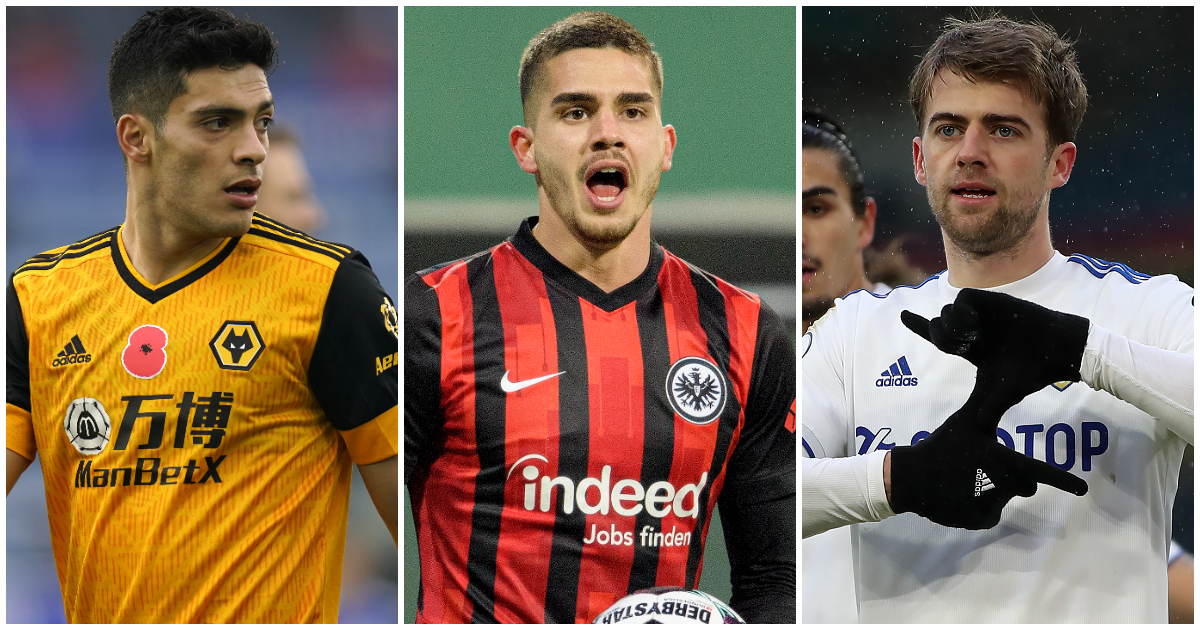 The obvious Man Utd striker targets are Harry Kane and Erling Haaland. But what if they prove impossible?

Andre Silva
The Portugal international is the name currently in the frame to lead the line for United next season. And the whispers haven’t escaped Silva’s attention.

“I’ve heard rumours, but that is it. Rumours are rumours. At the end of this season, it’s something that gives me more motivation to work, it’s a sign that what I have accomplished has borne fruit and the path has been good.”

What has he accomplished? So far this season, 19 goals in 21 Bundesliga games, which nestles Silva between goal robots Robert Lewandowski and Haaland in the race for the German Golden Boot. Only Lewandowski and Lionel Messi have scored more goals in Europe’s top five leagues this season.

Silva has certainly found a home at Eintracht Frankfurt. This season is a continuation of the progress he made on loan there last term, when he notched 12 goals – the first time since leaving Porto in 2017 that the 25-year-old had broken into double figures. He struggled with just two goals in 25 games after a big-money move to AC Milan and while nine goals during a year on loan at Sevilla marked an improvement, it hardly had the big boys queueing up once more.

Luka Jovic
Like Silva, Jovic established his credentials as goal machine in Frankfurt. After failing to make the breakthrough at Benfica, he moved to Germany on a two-season loan in 2017, after which he netted 25 Bundesliga goals.

Frankfurt made Benfica look rather silly by exercising their option to buy Jovic for around £5million before almost immediately selling him on to Real Madrid for ten times that amount. Which remains one of the smartest bits of business of recent years.

Especially since Frankfurt now have Jovic back. The Serbia striker returned in January to complete the season on loan back in the Bundesliga after struggling to settle at Real. He managed only a couple of La Liga goals in 21 appearances over a season and a half, but already he is on three in eight matches for Frankfurt.

Which is good news for Real if they hope to claw back anything even close to the investment they made to sign Jovic in 2019. United were said to be keen last summer so we can only presume they are watching the 23-year-old closely as he vies with Silva for the starting spot at Frankfurt.

F365 Says: To fail at Real is forgivable… Prem pair must move for Jovic

Dominic Calvert-Lewin
United have also had a long-term interest in Calvert-Lewin. They were first linked with the Everton striker in 2019 and the rumours haven’t dissipated, even if their chances of signing him probably have.

Calvert-Lewin was in the £50million bracket back then and his form since, coupled with the fact he has signed a long-term deal, has seen his value skyrocket further. He finished with 13 Premier League goals last season which he has already matched this term in 15 fewer matches.

And United’s interest was initially registered before Carlo Ancelotti took over at Everton. The Italian, along with Duncan Ferguson, has taken Calvert-Lewin’s game to another level and into the England reckoning.

Unfortunately for United, Everton players are no longer easy pickings in the transfer market. The Toffees don’t need the cash and few will push to leave while Ancelotti is building at Goodison.

The Wolves striker is currently sidelined after fracturing his skull in November, but the Red Devils were fond of the Mexican prior to his injury, as he himself revealed.

“One day I woke up and Juventus wanted me, another Manchester United and what I know is that there were approaches made. But an agreement was never reached and nothing was close… It did not happen this time. If it happens at some point then it will have to be what is best for me, for Wolves and the team that I join.”

Jimenez’s appeal came in the 27 goals he scored for Wolves last season but Nuno and Wolves have had to prepare for life without the 29-year-old with the signing of Jose Willian in January, following the club-record arrival of Fabio Silva last summer. Wolves have the option of making Willian’s deal permanent in the summer, by which time Jimenez will have turned 30, which means his value will start to plummet even if his productivity does not.

No English player not named Harry Kane has scored more in the Premier League this season, with 13 goals quelling the concerns that Bamford would struggle at the highest level.

After Tony Pulis hardened Bamford, Marcelo Bielsa has further refined the 27-year-old dismissed by many as too push to prosper at the top.

But, similar to Calvert-Lewin and Ancelotti, Bamford and Bielsa are a formidable double act, and Leeds have no motivation to sell a striker moulded to thrive in their system – especially not to Manchester United.