Home F365 Features Where might all Man Utd’s players go and for how much? 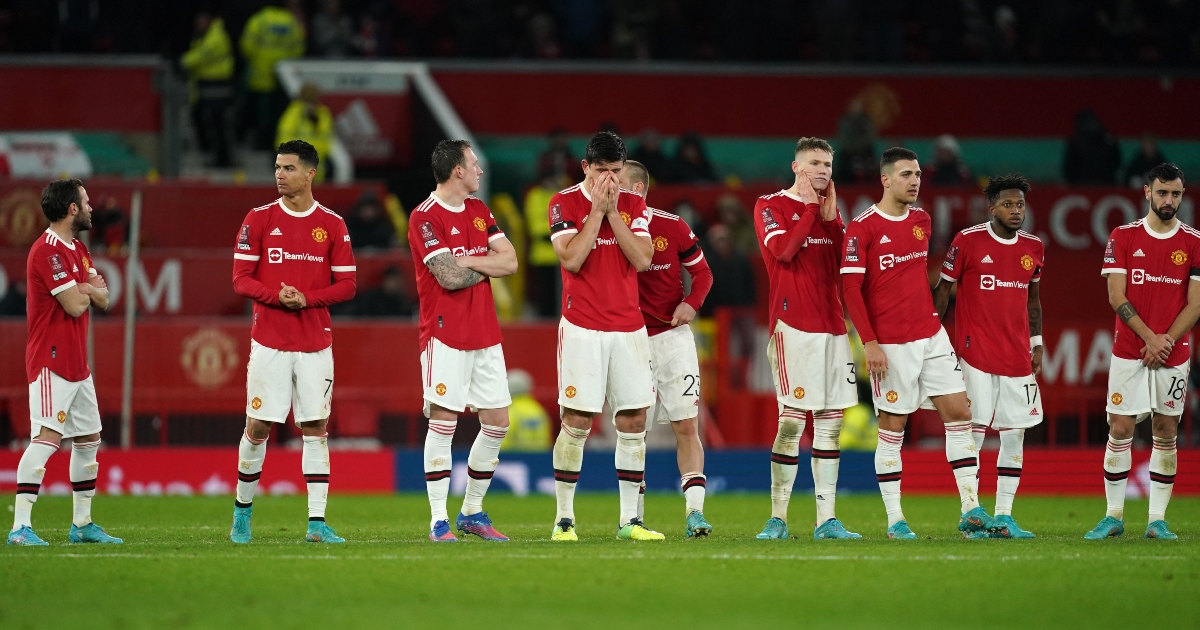 Even if they’ve had enough at Old Trafford, many Man Utd players might be disappointed to see what options they’d possibly have elsewhere…

It used to be said that the only way out of Manchester United is down. Is that still true? Perhaps. Most of their current players would ceratainly struggle to move up.

Going nowhere since he’s one of the few players to emerge from this sh*t-show of season with a smidgen of credit. That, and he’s on silly money that no other club would even consider matching. If they were to shift him, though, maybe Atletico cash in on Jan Oblak and take De Gea home.

Desperately needs to move this summer before people forget he exists. With a very small body of work to show for two years during which he has lost the battle for the gloves, Henderson is relying on someone like Newcastle still being tempted or a club like Southampton having a really long memory.

Ian King: Man United are drifting towards a re-build with no plans

Reports suggest Shaw might be one of the few players Ralf Rangnick recommends for retention. If not, a lateral move would certainly be a reasonable expectation – Spurs if they sell Sergio Reguilon? Or maybe Brendan would give United their money back and Shaw the big cuddle he’s been craving.

It would be lovely to know what Varane thinks of all this. And whether he fancies sticking around. United really need him to.

It wouldn’t be a huge shock if a half-decent European side found room for Lindelof given his versatility.

Sheesh. In his current form, who would bother? We all know there is a top-class defender in Maguire but his reputation is in pieces and there’s only so long that can continue without his prospects disappearing around the U-bend. Would need a side who don’t mind relying on a deeper defence.

Dearie me. Signed for an initial £45million in 2019, and now they might be lucky to get a third of that back for a full-back so obviously petrified of crossing the halfway line. Can picture him going ‘home’.

Had a good run initially under Rangnick but the interim manager seems to have reached a similar conclusion as Ole Gunnar Solskjaer. Watch him go to Dortmund and fulfil the potential Jose Mourinho always thought he had.

Has shown enough glimpses to earn a return to Europe and United aren’t likely to keep both him and Shaw beyond the summer.

Said to be irked by Maguire’s continued presence in the XI but Suicide Eric is hardly whining from a position of strength. Can’t be relied upon for form or fitness. But someone will take a punt on him, if only for sh*ts and giggles…

Jose has done it once, he might do it again…

McTominay is one of the very few players you might put good money on being at United next season. If not, based on nothing at all, it feels like he’d do a decent job in Arsenal’s engine room and they’ll certainly need a midfielder.

Will be 34 by the start of next season and he’s been slowing down for a year or two already. Apparently a good character to have around and Christ knows United are short of them, but a parting seems inevitable.

Pogba has been trying to get away from United for almost four years and this summer he’ll finally get his wish. Where he goes depends on who can meet his wage demands while putting up with his and Mino’s sh*t.

Fernandes is one of the few players still under contract who would attract interest from the top clubs. United would be mad to sell. But, United…

Fancies a season or two with Lionel Messi if United don’t finish in the top four, apparently. PSG are daft and rich enough to do it.

The Uruguayan has already checked out and isn’t letting silly things like away matches get in the way of planning his move to either Spain or South America.

The fact that Rashford is open to a move highlights just how bad things must have become at Old Trafford. United would be terrified of selling the child-feeder which means they almost certainly won’t. But PSG would be interested again if Kylian Mbappe is on his way.

Sorry, Jadon, but you’re going nowhere. Literally and, unless a new manager has the desired impact, metaphorically too.

United were greedy last summer and it will cost them this year when Lingard has his pick of clubs. Hasn’t played enough football to be missed.

Too lovely for this sh*t. Farewell, handsome Juan.

Certainly not the most technical player to emerge through United’s academy but, as McTominay has proved, trustworthiness will carry you a long way in a dressing room dripping with self-interest.

The next manager may well want to look at van de Beek, especially if that new man is Erik ten Hag. If not, Everton seem quite happy with him. Assuming they stay up…

There is a very real danger that Martial and United will be stuck with each other next season since Sevilla have already decided they have no intention of keeping him. Not on those wages…