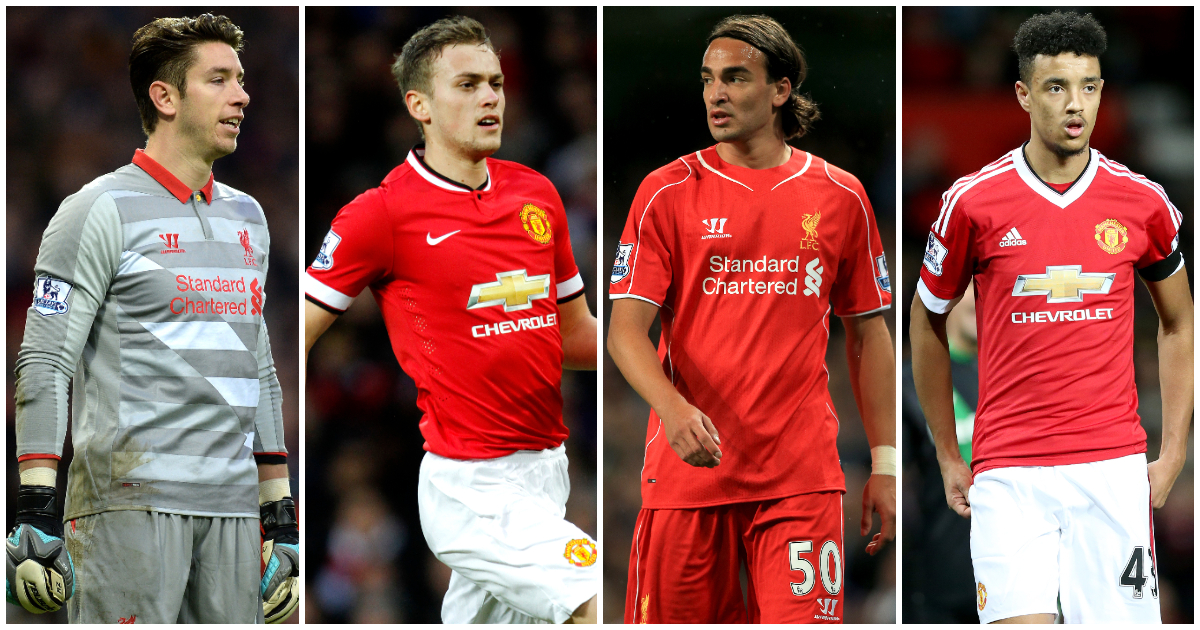 Thanks to Liverpool’s summer of 2014 and Louis van Gaal, we’ve an XI from the last decade…

Manchester United against Liverpool may be the Premier League’s showpiece occasion but it has featured some absolute dross over the last 10 years. As evidence, here’s an XI, made up of at least five players from either side.

GK: Brad Jones
The Australia goalkeeper was the beneficiary of Brendan Rodgers’ decision to drop Simon Mignolet for the visit to Old Trafford in October 2014. It was Jones’ first Premier League appearance for 21 months. And it showed.

The stand-in keeper dived out of the way of Wayne Rooney’s opener and fell hook, line and sinker for Juan Mata’s dummy to allow Robin van Persie an empty net for United’s game-clinching third.

RB: Andre Wisdom
The right-back was an England Under-21 international before he made his senior debut for Liverpool. The Reds were obviously banking on Wisdom to make the grade since they gave him a long-term contract after eight Premier League appearances.

Wisdom inked that deal a couple of days before playing in defence at Old Trafford in a 2-1 win for United. He played only five more times in the Premier League, including a cameo role in a 1-0 win over the Red Devils at Anfield.

He managed only one more game before spending the rest of his contract on loan at Derby, West Brom, Norwich and Red Bull Salzburg.

CB: Paddy McNair
McNair has made a decent career in the game after persuading Jose Mourinho to let him leave United on a permanent basis when the ex-United boss only wanted to see him go on loan. “I just wanted to go to Sunderland and play in the Premier League every week.” Ah.

Much to his chagrin, he makes this XI as a central defender after replacing Phil Jones for the final minute of the 3-0 win over Liverpool in 2014. “I’m not a defender; I’ve never been a defender,” he said in 2016. “I filled in there a few times. Van Gaal played me there and I was happy to play there for him but in the back of my mind I always thought, ‘No, this isn’t my position, I know I’m a midfielder’.”

McNair has played 40 games as a centre-back for Middlesbrough this season.

CB: Steven Caulker
Between Caulker and McNair, the centre-back pairing has a total of two minutes’ action in United v Liverpool clashes.

One of Liverpool’s stranger signings during a strange period, Caulker featured for the final few seconds of the Reds’ 1-0 home defeat to United in 2016. Though the central defender was chucked on as an emergency striker, as he was the week before against Arsenal.

LB: Cameron Borthwick-Jackson
During the second half of 2015/16, it seemed like Borthwick-Jackson might see off Luke Shaw in the battle for the left-back spot at Old Trafford. Louis van Gaal clearly fancied the academy graduate, who made 16 appearances under the Dutchman including a 1-0 win at Anfield.

On Van Gaal’s recommendation, United gave Borthwick-Jackson a four-year contract which he signed on the same day Marcus Rashford committed his long-term future to United. But when Borthwick-Jackson put pen to paper, Van Gaal had just departed having been replaced by Jose Mourinho, and the full-back never played again for United.

Borthwick-Jackson, now 24, is currently playing in League Two for Oldham.

Remember when United fans thought they were gonna win the league cos they bought Morgan Schneiderlin and Bastian Schweinsteiger?

More vowels in their names than goals and assists for the club…#MUFC pic.twitter.com/Qo6U8tQTiX

CM: Morgan Schneiderlin
One half of the highly-anticipated Schmidfield signed by Van Gaal in 2014 which turned out to be Schite.

There were high hopes for Schneiderlin when he joined from Southampton for £25million in 2015. But it never happened for him at Old Trafford. He wasn’t terrible but never did it seem that he belonged in the United XI before he was sold to Everton 18 months after he arrived.

“When you play football, you need to play with freedom and I didn’t in my first year in Manchester.” he reflected upon leaving United, exposing an abject lack of research into Van Gaal.

CM: Luis Alberto
The midfielder made his Liverpool debut during the last seven minutes of a 1-0 win over United in September 2013 but he was never trusted to start for the Reds in the Premier League. He managed only 14 appearances in all competitions before being loaned to Malaga and then Deportivo La Coruna.

“I think it’s a little bit my fault,” he told France Football last year. “I didn’t do everything necessary to be at my level in terms of work and focus.”

That would go some way towards explaining it. The lad presumably got his sh*t together because after being sold to Lazio at a loss, he made his Spain debut in 2017.

RW: Lazar Markovic
“An exciting signing,” said Rodgers after Liverpool paid around £20million to bring the winger from Benfica during the cursed summer of 2014. “He is the sort of character who is hungry to get better and progress.”

Markovic didn’t get better and he didn’t progress. A hugely underwhelming first season at Anfield was as good as it got, with the Serbian spending the remainder of his Liverpool contract on loan at Fenerbahce, Sporting Lisbon, Hull and Anderlecht before moving to Fulham on a free transfer.

“Shinji Kagawa is one of the best players in the world and now he plays 20 minutes at Manchester United – on the left wing! My heart breaks. Really, I have tears in my eyes.”

Dry your eyes, mate. Even Jurgen Klopp must now acknowledge that Kagawa was crap for United. Was it his fault? Not entirely, no. Of course, it would have helped if he played in his preferred central role for United. But who should Sir Alex Ferguson, David Moyes and Louis van Gaal have left out? Robin van Persie? Juan Mata? Wayne Rooney?

Kagawa failed to adapt and nothing he has done since leaving Old Trafford suggests he was treated unfairly. Though he does have a couple of wins over Liverpool to his name…

CF: James Wilson
“James is one of the brightest young English prospects and we are delighted he has signed a new contract,” said Van Gaal in September 2015 when Wilson signed a new four-year deal.

The striker played only eight more minutes in the Premier League after that, having been given his debut by Ryan Giggs before Van Gaal played him 17 times in his first season in charge.

Wilson saw out his United contract at Brighton, Derby and Sheffield United – all in the Championship – before a year at Aberdeen. After 18 months in Scotland, the forward is back in Manchester with Salford City.

CF: Iago Aspas
The Spain striker is one of maybe two players in this XI whose career went on an upward trajectory after leaving one of these clubs. His spell at Liverpool is the blot on a career which has seen Aspas net 148 La Liga goals for Celta Vigo as well as six in 18 Spain caps.

At Liverpool, he couldn’t find his way to goal with a map. And then there’s this…

Aspas: "The corner is the last memory they have of me but football always gives you another chance" #LFC pic.twitter.com/v45o4F9shz