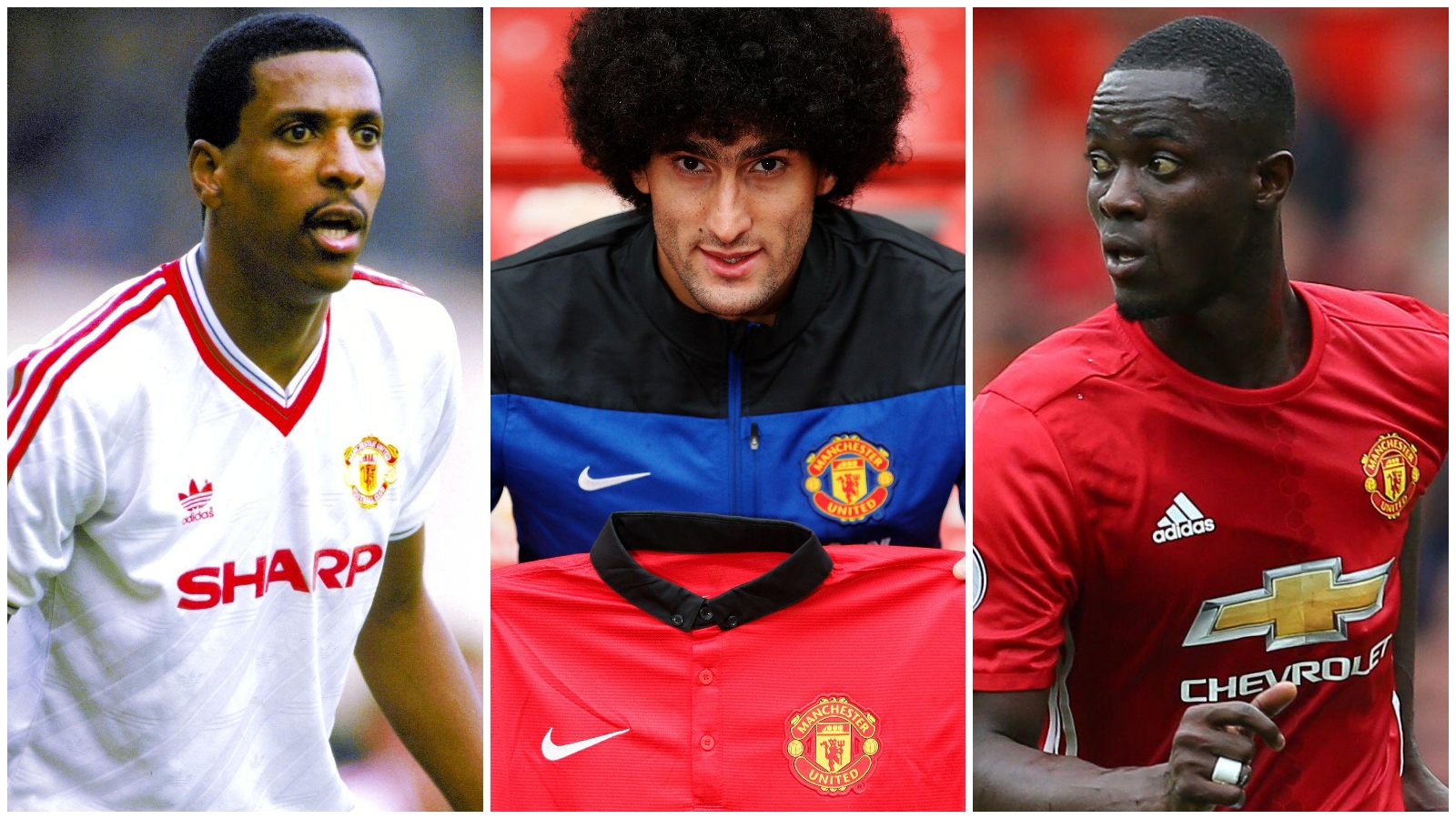 It would appear that Manchester United are close to making their first signing for Ten Hag, with Tyrell Malacia set to arrive from Feyenoord. Ten Hag can only hope the full-back is more successful than most of his predecessors’ first recruits…

Ron Atkinson – Frank Stapleton
Upon taking over from Dave Sexton, Atkinson needed a new striker, with Joe Jordan heading for AC Milan and club record-signing Gary Birtles proving to be a massive dud.

So Atkinson turned to Republic of Ireland centre-forward Stapleton, who bagged 108 goals – including one in an FA Cup final against United – in 300 Arsenal appearances after being rejected for an apprenticeship at Old Trafford. The two clubs could not agree a fee so it went to tribunal, with United ordered to pay the Gunners £900,000.

Stapleton finished as United’s top scorer in his and Atkinson’s first season at the club – but the striker was not the most important signing of the campaign. Atkinson promised United’s board that Bryan Robson was “not even a gamble, it’s guaranteed” and their faith in paying a British record £1.5million to West Brom was repaid many times over.

Stapleton remained at Old Trafford throughout Atkinson’s reign, scoring 78 goals before before becoming one of the first to be culled by Sir Alex Ferguson. The new boss later wrote that he was shocked at how Stapleton had become “a shadow of his former self”, adding: “He had lost his mobility and he just didn’t look like he would ever score a goal.”

Sir Alex Ferguson – Viv Anderson
Fergie followed Big Ron’s lead by making his first signing an experienced international from Arsenal who had been rejected by United as a schoolboy.

After being looked over for an apprenticeship at Old Trafford, Anderson went to Nottingham Forest and won two European Cups under Brian Clough before becoming the first black player to represent England. From Forest he went to Arsenal, where George Graham was keen to renew the 30-year-old’s contract in 1987. But Robson called his England team-mate and told him United’s new manager would like to meet him.

“I just said to my wife, “We’re going to Man Utd!” Anderson explained later – but not without a fight from Arsenal. Anderson was offered terms for a new three-year contract but he was determined to join up with Ferguson. Pre-Bosman, United offered £100,000 while Arsenal wanted £450,000, which was the sum QPR were asking for Graham’s preferred replacement, Terry Fenwick.

A tribunal ordered United to pay £250,000 and Anderson became an important presence in Ferguson’s XI during his first full season in charge, when the Red Devils finished as First Division runners-up. But having debuted for United age 31, time was not on Anderson’s side. He managed only five league appearances in 1988-89 before nine more the following season, at the end of which Anderson found himself watching from the Wembley stands when Ferguson moved Paul Ince from midfield to play at right-back in the FA Cup final.

Anderson moved to Sheffield Wednesday on a free in January the following year; he captained the Owls and helped take them to third in the First Division and both domestic cup finals in 1993.

David Moyes – Marouane Fellaini
After getting his feet under the table nice and early ahead of the 2013-14 season, the Chosen One spent most of the summer watching Ed Woodward scuttle around the world fruitlessly chasing after big names like Cesc Fabregas, Thiago Alcantara, Toni Kroos and Gareth Bale.

The only transfer business Woodward and Moyes closed was Fellaini. The Everton midfielder joined United on the same day Bale headed to Real Madrid with Fellaini being Moyes’ only signing of his first and only summer in charge of United. He cost £27.5million just over a month after a release clause of £23.5million had expired and a couple of weeks on from United offering £28million for both Fellaini and Leighton Baines.

Fellaini tried hard and for that reason, he became more trusted and valued than many of his more technically gifted, pea-hearted team-mates. But even Moyes later admitted that the signing was almost doomed to fail.

“You can ask my staff – the last thing I wanted was for Marouane Fellaini to be my first signing,” Moyes told Radio 5 Live. “I knew, coming from my old club, the look was never going to be good.”

Louis van Gaal – Ander Herrera
The Athletic Bilbao star was the first signing of the Van Gaal era – but he could have been Moyes’ first purchase.

The summer before United finally landed Herrera, Moyes wanted the midfielder as the clock ticked down on his first transfer window at Old Trafford. Athletic Bilbao refused to accept any figure less than Herrera’s €36million buy-out clause but United sent three well-known sports lawyers to the LFP’s offices to grease the wheels of a deal. When the officials left without closing the deal United, laughably, claimed they were imposters.

At the end of that season, with Moyes already gone before the end of the first year of a contract which is only now expiring, United moved again for Herrera and Athletic Bilbao remained similarly defiant. Woodward eventually stumped up the funds to pay his buy-out clause and the then 24-year-old moved to Old Trafford before Van Gaal, who was still overseeing Holland’s World Cup campaign in Brazil, had even set foot through the door.

Herrera’s combative style made him a United favourite under Van Gaal, Jose Mourinho and Ole Gunnar Solskjaer but when his initial five-year was reaching its conclusion, Woodard f*cked up again. It was claimed that Herrera was demanding a huge pay-rise to re-sign, but reports suggested he decided to explore his options elsewhere after being proposed a pay-cut. PSG weren’t as thrifty and whisked Herrera off to Ligue 1.

IMAGE: #mufc legend Sir Bobby Charlton was on hand to welcome @anderherrera8 to the club. pic.twitter.com/Av7dKkjVce

Jose Mourinho – Eric Bailly
Less than a fortnight after being appointed as United manager, amid links with Zlatan Ibrahimovic, Mourinho made a rather less familiar name his first of 11 signings at Old Trafford.

United spent around £30.4million on a 22-year-old from Villarreal about whom few knew much about. Mourinho, though, insisted that Bailly would be worth the outlay.

“Eric has the potential to become one of the best around,” said the new manager upon the announcement of Bailly’s signing. But, as we’ve all discovered in the three years since, he has even greater potential for calamity. Injuries have perhaps hampered his progress towards the ambitious target set by Mourinho, but some unfathomable performances and erratic indiscipline are bigger factors in Bailly’s struggles.

A year after his arrival, United spent a similar figure on another centre-back, Victor Lindelof. Prior to Mourinho’s sacking, Bailly found himself being rotated for bench duty with Marcos Rojo and Phil Jones, despite United’s defensive failures.

Bailly fared no better under Solskjaer or Ralf Rangnick. In his first appearance under Solskjaer, Bailly was sent off with United 4-1 up at home to Bournemouth. When he was restored to the team for the famous Champions League last 16 second leg against PSG, he was hooked after 36 minutes when Rio Ferdinand offered this damning verdict: “It would have been negligent to keep Bailly on the pitch to be honest. It’s a blessing he got injured and had to come off.”

His next appearance came at home to Chelsea when he was lucky to avoid a red card for a needless two-footed tackle a few minutes before suffering another knee injury. Bailly has managed 14 Premier League starts in the three seasons since, with United hoping to offload him this summer.

Ole Gunnar Solskjaer – Daniel James
After being given the permanent gig during the second half of 2018/19, Solskjaer made James his first recruit, with the Wales winger arriving from Swansea for around £15million, plus a few extra quid in add-ons.

James played more of a role than he might have expected in his first season, appearing in all but five Premier League games, scoring three goals and creating six more. But none of those goals or assists came after the New Year and by the following campaign he was more of a periphery presence, starting only 11 times in the league.

Then Jadon Sancho finally arrived from Borussia Dortmund, squeezing James out of the picture further. When Leeds pitched up offering a profit of almost £10million for a player they thought they had landed six months before United took him, the Red Devils could hardly say no.

Comparative to Solskjaer’s other signings in his first summer in charge, James was a snip. His other recruits: Aaron Wan-Bissaka for £50million; and Harry Maguire for £80million.

Ralf Rangnick – no one
The interim manager wanted a striker during his only transfer window in charge, with Anthony Martial sent to Sevilla in January and Mason Greenwood suspended.

“We should have tried to sign a player in the 48 hours we had…but we didn’t do it,” Rangnick said in May by which time he was counting down the days until the end of the season. “There were a few: Luis Diaz, who is now at Liverpool; Julian Alvarez, who will be at Manchester City in the summer; and Dusan Vlahovic, who at the time was still with Fiorentina.