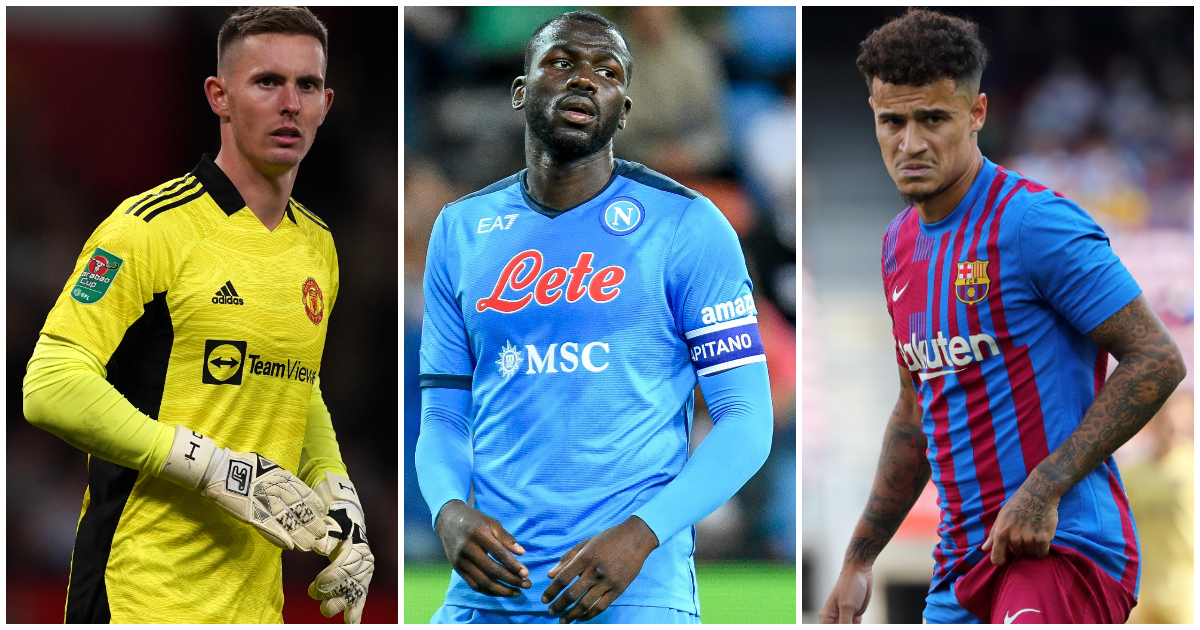 The new Saudi owners of Newcastle apparently want to ‘grow the club organically’ but they will doubtless flex their financial muscle in the transfer market. Here are six gettable targets…

Philippe Coutinho
The Geordie Robinho offers the new owners the perfect blend of star power and, if it matters, affordability. Coutinho joined Barcelona for £142million after tearing up the Premier League with Liverpool and while he has flopped quite spectacularly at the Nou Camp, his form at Anfield is just about fresh enough in our memories to make the playmaker a tantalising target for the Toon Army.

When the Saudi takeover was first mooted, Coutinho was mentioned as a target and little has changed since, except the perilous state of Barca’s finances has been laid are for all to see. The Catalans need desperately to shift their record signing and quick, allowing Newcastle’s new owners a quick and easy win in January.

Coutinho’s profile on the world stage would also offer Newcastle the exposure they would crave as the game’s newest superpower. What’s in it for him? At least the same salary he’s getting at Barca – he wouldn’t get that anywhere else – and the opportunity to rebuild a reputation that has taken a battering during a dreadful four years at the Nou Camp.

Amnesty appeals to Prem over Saudi-led takeover of Newcastle

Dean Henderson
Newcastle have loads of goalkeepers. Just none that seem to be all that reliable. Karl Darlow and Martin Dubravka have rotated as No.1 amid a series of fitness issues for both, while Freddie Woodman blew his chance to stake a claim for the gloves.

A move for Henderson would put the security of the Toon goal in safer hands while giving the Cumbrian a chance to kickstart his Premier League career.

Henderson engaged in a season-long scrap with David De Gea for the No.1 spot at Manchester United in which neither keeper emerged victorious. De Gea seems to have taken the prize, with injury and Covid denying Henderson a fair fight before the current campaign in which the Spaniard has shone.

Henderson needs a move – a loan at the very least – and the prospect of guarding Newcastle’s goal at the start of a new era for the Magpies is sure to appeal to the 24-year-old’s ego. For Newcastle’s new owners, the prospect of signing a potential England No.1 would be worth the £35million is might take for United to sell their academy graduate.

Jesse Lingard
Newcastle will present themselves as a vastly different club from the sh*tshow Lingard turned down last January to move to West Ham instead.

There, the England attacker showed what he can do when trusted with a leading role in a Premier League attack – something he just won’t get at Manchester United.

As January approaches, so too does United’s last opportunity to claim a fee for Lingard, who is out of contract at Old Trafford at the end of the season. Newcastle did not appeal to the 28-year-old last winter for very good reasons, but a year later, an offer from the Magpies would be a very different proposition, and as a player who needs to feel loved, Lingard would get the adoration he craves at St James’ Park.

Raheem Sterling
Sterling has been in contract talks with Manchester City seemingly since the dawn of time but no progress seems to have been made. His slipping status at the Etihad hardly strengthens his bargaining position. As he approaches the final year of his current deal, a parting is beginning to look more inevitable.

Sterling’s profile as one of England biggest stars, and the fact he can play a bit, would surely make Newcastle’s new regime more open to meeting the 26-year-old’s demands.

Plus, Sterling’s high-profile work in the fight against racism won’t have escaped the notice of any new regime that may or may not be looking to divert attention away from a p*ss-poor human rights record.

Eden Hazard
When the new Newcastle board, which could feature Jason Wilcox as sporting director, peruses the Real Madrid bench for a shiny new plaything, Gareth Bale might appeal to some. But even the Toon would be wary of the Welshman’s obvious craving for retirement and the golf course.

Hazard, though, has a point to prove and it doesn’t look like he’ll get the chance at Real. The club’s record signing has endured two miserable seasons at the Bernabeu, during which he has spent too much time injured or at the buffet table.

The former Chelsea star has finally achieved a level of fitness he has so far lacked in Spain yet he remains on the Bernabeu bunch. Kylian Mbappe’s arrival certainly won’t get him off it any faster.

So he might be wise to seek another challenge, perhaps back in the Premier League where he proved himself as one of the world’s best attackers. Hazard might not come as cheap as Coutinho or even Sterling, but who gives a sh*t when you’re richer than God?

Kalidou Koulibaly
Even with all the shiny new forwards, whoever becomes the next Newcastle will need a defender or two, unless Kevin Keegan is slated for a glorious return to the St James’ Park dugout.

Koulibaly was linked with Newcastle the last time the takeover looked like it might happen, and the centre-back’s position remains as it was then. He sought a new challenge and pay rise but no club in the elite bracket was willing to match Napoli’s valuation, especially not after Koulibaly turned 30 last summer.

Newcastle’s new owners would probably be willing to overlook Koulibaly’s age – they’ve overlooked considerably worse things – since it would be viewed as a huge coup for the Magpies to snare one of the game’s most in-demand centre-backs.