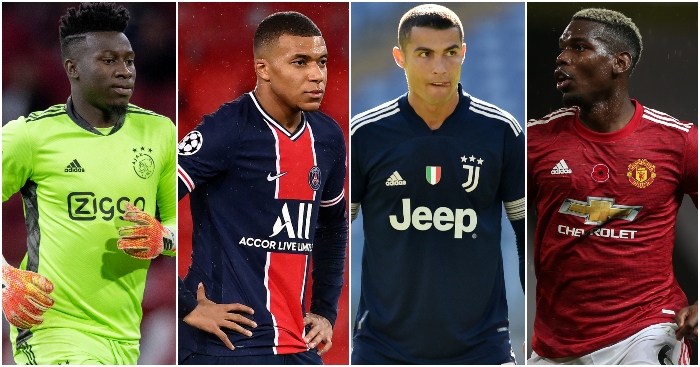 While players out of contract next year begin to think about talking to other clubs, many of those same clubs are starting to become concerned about losing their biggest stars the following year. Here is an astonishing XI of big names yet to renew their contracts beyond 2022…

The Ajax goalkeeper looked primed for a big move this summer before Covid acted the d*ck. Chelsea were heavily linked with the Cameroon keeper but the Blues opted for Edouard Mendy, who at £22million was cheaper than what they might have prised Onana from Ajax. And Mendy isn’t making a bad fist of his big chance. Onana will be better positioned to move next year as he enters the final year of his contract but the concern remains: which of the elite clubs need a keeper? Most appear set at the moment with priorities elsewhere.

Onana’s team-mate was also rumoured to be on the move last summer but he too remains in Amsterdam. Unlike Onana, Tagliafico doesn’t have time on his side. The Argentina left-back will be pushing 30 when his Ajax deal is due to expire in June 2022, but rumours persist that Manchester City could make a move long before then, in January. Should he remain in Holland after the winter window, you can bet Edwin van der Sar will be looking to sit down with Tagliafico’s agent.

Might we finally see Varane in the Premier League? Talks over a renewal of his Real Madrid contract apparently did not go well earlier in the year, so poorly in fact that Varane’s people have been forced to take a leaf from Sergio Ramos’s playbook by leaking interest from Manchester United. The story goes that United are willing to pay £90million for their long-term target, which seems far-fetched with Varane approaching his 28th birthday.

Bayern will likely seek to tie down the 25-year-old centre-back before they encounter similar problems with Sule that they are having with David Alaba. Jerome Boateng, who has been revitalised under Hansi Flick, is out of contract at the same time as Alaba so Bayern will be keen to avoid further disruption to their defence. In which case, Sule’s agent is in business…

Any club looking to take advantage of Carvajal’s diminishing contract best get in quick. Reports from Spain last week suggested the right-back and Real Madrid are in ‘total and absolute harmony’ over an extension to 2024 which will take Carvajal beyond his 32nd birthday. Indeed, Carvajal’s contentment and Real’s satisfaction with the homegrown left-back was a prominent reason why Achraf Hakimi was allowed to leave the Bernabeu last summer.

It must be nice for Pogba to see his name in an XI since he can no longer get in Manchester United’s team. That worrying development won’t help Mino Raiola when it comes to negotiating Pogba’s next deal, wherever it may be. He can no longer justify making huge demands of United – one of the few clubs who would until recently have satisfied them – while clubs like Juventus and Real Madrid are likely to look more favourably upon players who aren’t being left out for Fred or Scott McTominay. It’s a pivotal time for Pogba, and he has some questions to answer.

The Rennes midfielder is one of the reasons why Real Madrid’s interest in Pogba has faded. Real reportedly wanted Camavinga this summer but Covid led to them keeping their powder dry until next summer, when Kylian Mbappe and either Camavinga or Pogba will be in their sights. Camavinga has the advantage of being a decade younger than Pogba and he can point to a run of consistent form, which the more senior of the pair last managed when the Rennes star was still at school.

The Bayern Munich midfielder is another big name transformed by Flick. Under Niko Kovac, Goretzka was a jack of all trades, master of none, but Flick made the 25-year-old a lynchpin of his midfield since when he has become “the best box-to-box midfielder in the world”, according to Ralf Ragnick. While some players in this XI may have suffered as a consequence of the pandemic, Goretzka put his time in lockdown to good use…

So, what did you get up to in lockdown?@leongoretzka_: pic.twitter.com/vZ31lkJ7K3

The France star has apparently made it clear to PSG that he won’t sign an extension to his current terms, meaning the Ligue 1 champions will have to cash in on their biggest asset next summer to avoid losing him for nothing. Real Madrid have been waiting for day that Mbappe becomes affordable and though Liverpool are said to be keen too, it is hard to see how even Florentino Perez screws this one up.

With his options having dried up, Neymar is reportedly telling anyone at PSG who will listen that he is now willing to discuss extending his contract. PSG, though, don’t seem as eager as they once were. Perhaps because they can see that at around £500,000 a week, the Brazil star is hardly offering value for money and they know he won’t get a similar deal elsewhere. PSG seem much more concerned about the prospect of losing Mbappe but with fight seemingly lost, perhaps Neymar will get some of the attention he seems to be craving.

At Juventus, Ronaldo is on similar terms to Neymar and while the Portuguese star is still doing the business, the Old Lady apparently recognises that their financial situation is not sustainable beyond next year. Reports suggest Ronaldo will be available for sale next summer and while Juve won’t get the £99million back that they invested in the 35-year-old, just clearing his salary from their books for the final year of his contract will be consolation enough. Ronaldo is said to earn four times more than Juve’s next highest earner, Matthijs De Ligt.