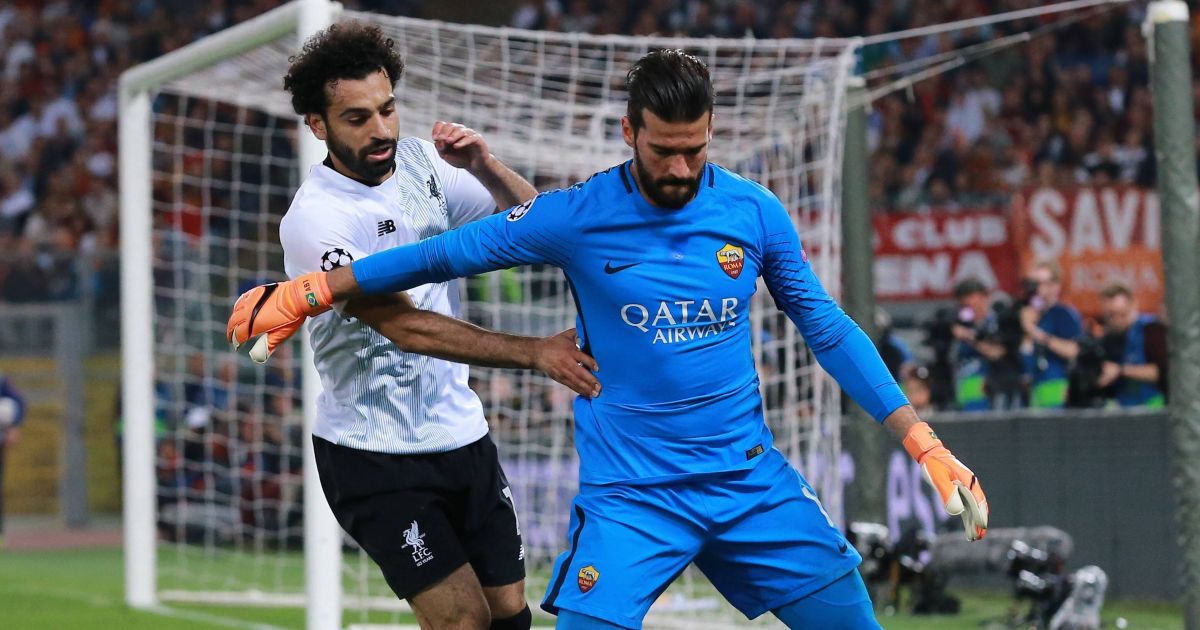 Erling Haaland will face suitors Man City this week. He may be the latest example of the ‘eye before you buy’ policy. Liverpool used it well.

Erling Haaland will face Manchester City this Tuesday as his Borussia Dortmund side look to stop the Citizens winning a maiden Champions League title. Haaland has been linked with City as a replacement for legendary striker Sergio Aguero but the Premier League leaders will face competition from Europe’s big boys for the Norwegian’s signature.

If he does arrive at the Etihad, he wouldn’t be the first to face his future side in Europe. Here’s an XI made up from players who faced their next club in the Champions League.

Goalkeeper: Alisson
The moustachioed Liverpool goalkeeper came up against his future employers whilst playing for Roma in the semi-finals of 2017/18 Champions League. Salah, Mane and Firmino scored past the Brazilian in a 5-2 rout for the Reds in the first leg before the Italian side almost pulled off an unlikely comeback with a 4-2 win at the Stadio Olimpico. The unwanted Loris Karius made a mess of things in the final, prompting Klopp to replace the hapless German with Alisson and the new number one helped Liverpool to a sixth European Cup in his first season. If you fancy a goalkeeper challenge, try naming the former Arsenal keeper who played against the Gunners in the group stage of the 1998/99 Champions League.

Right-back: Juliano Belletti
Joining Alisson in this XI is compatriot Juliano Belletti, with the former Chelsea defender playing against the Blues in 2005. The World Cup winner was playing for Barcelona at the time and was kind enough to give his future side the lead in their Champions League clash after turning a Damien Duff pass into his own net. His stint at Stamford Bridge included a run to the 2008 final in Moscow, where he converted a penalty in the Blues’ shootout defeat to Manchester United.

Centre-back: Thiago Silva
Yet another Brazilian makes the team, with Thiago Silva proving himself to be an excellent addition to the current Chelsea side – apart from the silly sending-off against West Brom, of course. However, the veteran defender was no stranger to Stamford Bridge even before his arrival, having played against the Blues in three separate Champions League campaigns while at Paris Saint-Germain, even managing to score a brilliant header in extra-time to knock Chelsea out in 2015. 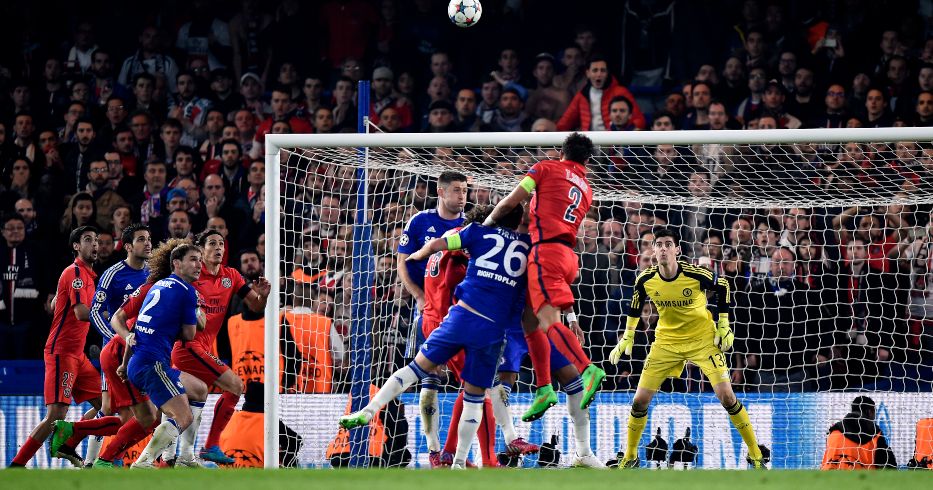 Centre-back: Thomas Vermaelen
Former Arsenal defender Thomas Vermaelen faced off against the Gunners in Europe while still a teenager back in the 2005/06 season. The Belgium international was playing for Ajax at the time and his good form in the Eredivisie persuaded Arsene Wenger to bring him to the Emirates. There is an option for another Brazilian in the side, with Elland Road legend Roque Junior coming up against Leeds whilst playing for AC Milan in the Yorkshire club’s famous run to the semi-finals of the 2000/01 Champions League.

Left-back: Benjamin Mendy
Part of the Ligue Un-winning Monaco side that was picked apart by Europe’s big boys at the end of the 2016/17 season, current Manchester City full-back Benjamin Mendy played against his future teammates in a thrilling Champions League round of 16 tie. City looked to have the upper hand after a 5-3 win in the first leg but a 3-1 defeat in the reverse fixture saw Pep Guardiola’s men crash out on away goals. Mendy helped les Monegasques to the semis before departing for the Etihad in the summer.

Central midfield: Michael Ballack
The 2005 Champions League is of course best remembered for the stunning comeback in the final from Liverpool, but Luis Garcia’s goal against Chelsea in the semis and prime Jose Mourinho masterminding the Blues to a 6-5 aggregate win over Bayern Munich in the quarters are other standout points of the campaign. Michael Ballack was part of the Bayern side that year and the German star converted a penalty against his future employers in the first-leg; he was livid at not being giving the chance to score a few more spot-kicks in Chelsea’s infamous semi-final defeat to Barcelona a few years later.

Central midfield: Ilkay Gundogan
Hoping to end Manchester City’s Champions League hoodoo this year, Ilkay Gundogan was blocking the club’s road to European glory once upon a time. A tricky group in the 2012/13 season saw Roberto Mancini’s men face off against Borussia Dortmund, Real Madrid and Ajax, with Gundogan playing a key role for the German side. A fine performance form Joe Hart helped to secure a draw against Jurgen Klopp’s men in their first meeting but a 1-0 defeat for the Citizens in the reverse fixture meant they finished the group winless and rock bottom. 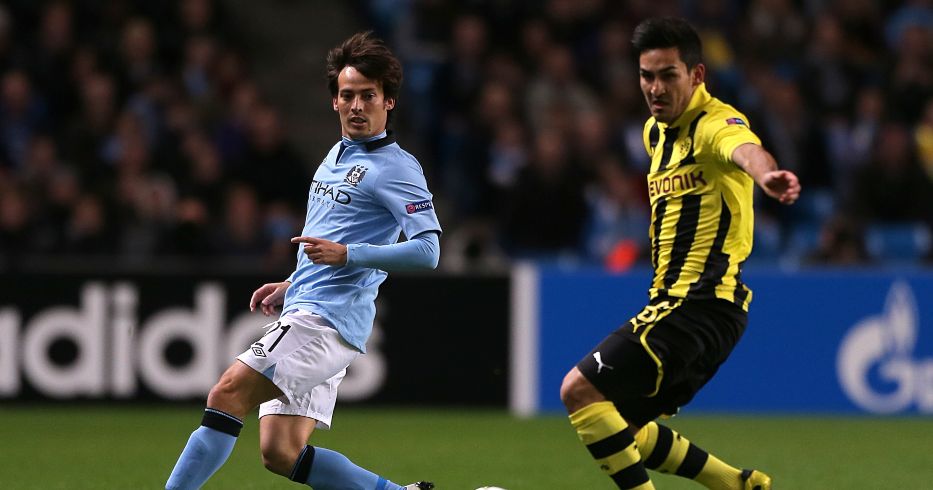 Central midfield: Kevin de Bruyne
Dortmund will be hoping to repeat those results against City this time around, but they’ll have to thwart pass-master Kevin de Bruyne if they’re going to do it. Of course, the Belgian star’s first Premier League club was Chelsea and he played against the Blues as a teenager for Genk in the group stage of the 2011/12 Champions League. The young De Bruyne and his team-mates were on the end of a 5-0 thrashing at Stamford Bridge but his domestic displays earned him a move to England in January.

Wing-forward: Mohamed Salah
De Bruyne ended up leaving London for Germany in search of regular first-team football but he wasn’t the only future superstar who slipped through the net at Stamford Bridge. Mohamed Salah scored twice against Chelsea in the 2013/14 group stage whilst playing for Basel and ended up signing for the Blues in January. However, the Egyptian wasn’t given much game time under Jose Mourinho and left for Roma in 2016.

Wing-forward: Pierre-Emerick Aubameyang
Arsenal forward Pierre-Emerick Aubameyang lined up against his future side in two European campaigns whilst playing for Borussia Dortmund. Back when the Gunners were still regularly qualifying for the Champions League, they were battling it out with Dortmund for top spot in Group F in 2013/14 and then Group D the following year, with Aubameyang scoring against Arsene Wenger’s men in a 2-0 win.

Striker: Diego Costa
The Chelsea staff must’ve decided that it’s much more enjoyable watching a sh*thouse playing for you rather than against you after signing Diego Costa from Atletico Madrid, not long after the Spain international scored against the Blues in the semi-finals 2013/14 Champions League. Other strikers eligible for this side include Andriy Shevchenko (Chelsea vs AC Milan 1999/2000), Patrick Kluivert (Newcastle vs Barcelona 2002/03) and Edinson Cavani (Man Utd vs PSG 2018/19).