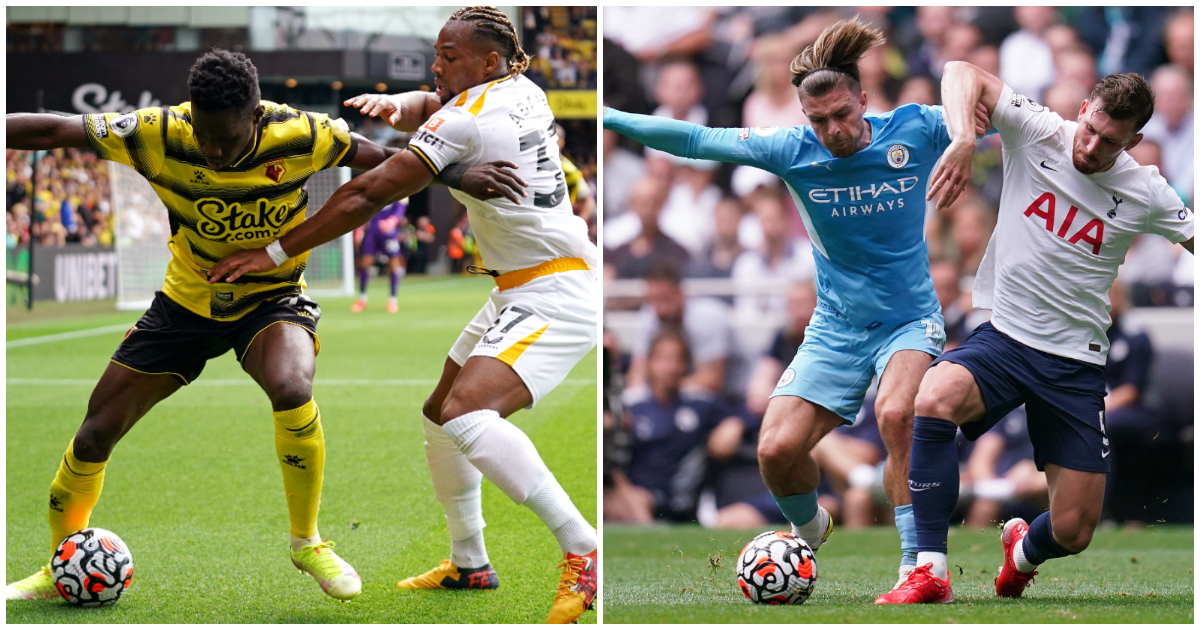 Amid the debate over referees being more lenient this season, we’ve taken a glance at which players have been fouled most in the first month.

Last season’s most-fouled player is third in the list so far. And despite Jurgen Klopp and Ole Gunnar Solskjaer’s concerns, none of their players feature. Nor does poor Richarlison.

10) Stuart Dallas (Leeds) – 8
The Cookstown Cafu stands out like a beacon in this list of wingers and forwards. Unfortunately, he also stood out last weekend. Kalvin Phillips would be the most-fouled Leeds player if it was based on fouls per game. But it’s not so he isn’t.

9) Raphinha (Leeds) – 8
You won’t find Leeds’ best player of the season so far – the shiniest turd, perhaps – whining about the rough and tumble of the Premier League: “I’m still used to the várzea (Brazilian street football), where you put ice on it and carry on,” he said last year. “No blood, no foul, man!”

8) Lucas Moura (Tottenham) – 8
Moura should be on nine fouls, but one he wasn’t given against Palace on Saturday led to another for Zaha, that prompted Japhet Tanganga’s first booking, which was swiftly followed by a second. Half the fouls Moura won came courtesy of Pep’s dirty b*stards on the opening weekend.

He was excellent in transition today. 🏃‍♂️ pic.twitter.com/ckliexUaOC

7) Jacob Ramsey (Aston Villa) – 8
Ramsey is the most-fouled player in the Premier League’s most-fouled team. Villa are ninth in Europe for fouls earned; the next highest Premier League team – Watford – are 46th.

6) Allan Saint-Maximin (Newcastle) – 8
Saint-Maximin and Traore are in a league of their own when it comes to dribbles. Traore has attempted 45 and ASM is on 30 – the third-highest has 22. So it makes sense that both would be targeted. On that note…

5) Adama Traore (Wolves) – 8
The Spain winger has been on fire this season, earning the WhoScored man of the match award in all four of his games. He would probably be further up this list if opponents could get near him. And when they do, they tend to bounce or slip off the greased-up speedster.

4) Che Adams (Southampton) – 10
Half of the fouls committed on Adams this season were at the hand of Dirty Man Utd. But the Saints striker is giving almost as good as he is getting, committing eight fouls of his own.

3) Jack Grealish (Manchester City) – 11
The England star was the Premier League’s most fouled player last season, with an average of 4.2 fouls per game. But at Manchester City, he is attempting fewer dribbles per game – 2.8 per game at City compared to 3.9 at Villa.

No one can resist trying to take a chunk out of those calves. 🦵

2) Wilfried Zaha (Crystal Palace) – 15
The Palace winger was the second-most fouled player last season, earning 88 fouls in 30 appearances. Of course, Zaha always reacts with good grace and accepts it as the compliment it is.

1) Ismaila Sarr (Watford) – 16
The Watford winger is the third-most fouled player in Europe, with only Angers duo Angelo Fulgini and Sofiane Boufal earning more fouls. Sarr has picked up an average of four fouls per game, the same as teammate Danny Rose, but the full-back has only played once since joining the Hornets.