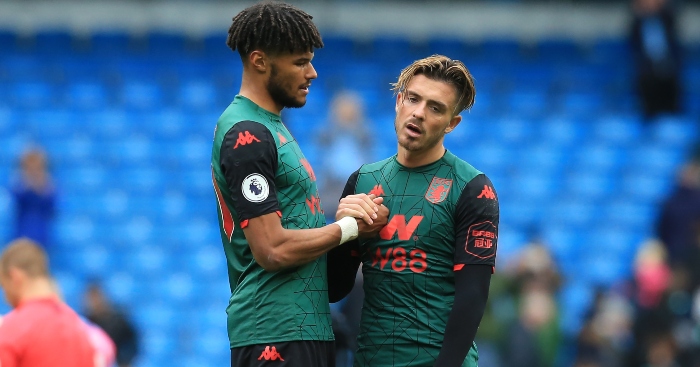 Best player: Jack Grealish
There isn’t a player in the Premier League more indispensable to his club than Jack Grealish. Liverpool would suffer in Virgil van Dijk’s absence; we know Spurs are much poorer without Harry Kane. But Villa surviving in the relegation fight even for this long without Grealish is unfathomable.

The 24-year-old has carried the Villans for much of the season and though he’ll more than likely be in the Premier League next season regardless of whether Villa are too, you can see what leading his boyhood team means for Grealish in his performances. He’s had the sh*t kicked out of him for much of the season, but never has he shied away from the responsibility, which is fortunate for Dean Smith since so many of his other players have been all too willing to let Grealish carry the load.

For those of us who neither cheer for Villa nor wish them a speedy return to the Championship, Grealish has been a joy to watch. He has stood out a mile and not just because of the league’s tightest shorts and lowest socks. Statistically, he leads Villa across the board for goals, assists, minutes, touches, passes and key passes. He’s also been dispossessed more often than any other player, but since the entire plan in Villa’s attack seems to consist of ‘get the ball to Grealish and watch’ we can forgive him for the odd giveaway.

Having been the shiny golden nugget in a sea of sweaty turds at Villa Park this term, Grealish is wanted by Manchester United this summer. Pep Guardiola loves him too and so do we.

Biggest disappointment: Danny Drinkwater
Everyone outside Villa Park could see the Villans were pissing squarely into a Force 10 gale if they hoped Drinkwater might save them from relegation.

The former England midfielder spent the first half of the season on loan at Burnley in an half-arsed effort to salvage his career and reputation after a couple of seasons spent picking up big money for literally nothing at Chelsea. The fact he played less than an hour at Turf Moor should have arisen suspicion at Villa Park, but apparently not enough to stop them from taking on the 30-year-old in January following John McGinn’s injury.

Throwing Drinkwater straight into the XI upon his arrival when Manchester City came to town was almost as daft as signing him in the first place. The ex-Leicester star had his pants pulled down repeatedly for 79 minutes by the champions, though he was hardly the only Villan left looking embarrassed after a 6-1 humbling on home turf.

When he wasn’t being embarrassed by opponents, Drinkwater got the job done himself. We’ll come to that…

Best performance: Norwich 1-5 Aston Villa
With one win in their opening eight matches, Villa went to Carrow Road languishing in the bottom three. By the time they left, Smith’s side had climbed up to 14th, with Wesley silencing some critics in a ruthless cull of the Canaries.

The Brazilian striker doubled his goal haul for the season with a first-half brace which set Villa on the road to an emphatic win. Wesley should have had a hat-trick, but Norwich’s stand-in keeper Michael McGovern made a great save from his penalty kick.

That mattered little to the outcome, similarly to a consolation goal handed to Norwich by some typically comedic defending by Villa late on as they became the first promoted side in 18 years to score five goals in a Premier League away match.

Worst performance: Watford 3-0 Aston Villa
Being humped at home by Manchester City was bad enough, but that can happen. The shambles at Watford really should not.

After ending a run of five straight defeats by edging past Norwich two days previously, Villa were expected to kick on when they visited their fellow drop-zone dwellers Watford. Instead, they phoned it in at the worst possible time.

Villa trailed at half-time after Troy Deeney capitalised on Ezri Konsa’s mistake and Smith admitted their first 45 minutes was bad enough to prompt the first proper bollocking of the season. But his words fell on deaf ears. Even while Watford played the last half hour with 10 men, they dominated their visitors with Villa only able to muster a single shot on target with their numerical advantage.

“I read the players the riot act at half-time,” said Smith afterwards. “We weren’t good enough. We lost the game in the first half… their work-rate was better than ours, which is the biggest disappointment.”

Biggest VAR moment: Awarding Tottenham a penalty at Villa Park.
VAR has been a bit of a dick to Villa. They have seen five decisions overturned with only one in their favour. And then, when they were awarded a penalty at Sheffield United for a handball by John Egan, Grealish missed it.

The most pivotal VAR intervention perhaps came in the defeat to Tottenham a month ago. Villa were playing well and level at 1-1 just before the break when Bjorn Engels slid in on Steven Bergwijn. The official in a Stockley Park cupboard judged that the Villa defender played the man, so Son Heung-min was given a chance to put Spurs ahead.

Pepe Reina saved the initial penalty, but Son followed up first while Villa abandoned their keeper. Engels made up for his error by scoring an equaliser soon after half-time, but the Villa centre-back sh*t his bed in added time, committing a schoolboy error to allow Son to run through and score a devastating last-gasp winner.

Did their recruitment work?
Hell no.

Villa have signed 16 players since being promoted via the play-offs last season – 12 arrived in the summer and another four followed in January – but taking the Fulham approach to recruitment has reaped similar results. Depending on which figures you believe, it could be argued that no club spent more money on new players last summer. Around £146million has bought Villa six wins and an increasingly bleak relegation scrap.

Even if Villa don’t pay for their transfer activity with relegation – however that may be decided – reports suggest sporting director Suso will suffer the consequences. A restructure might help but a re-think is essential.

Dick move: Drinkwater nutting a team-mate
The January loan signing has struggled to get close to any opponents this season, but he had no such problems with with his own team-mates.

Drinkwater, who has yet to finish a game for Villa since in arriving in January, also saw a training session curtailed prematurely last Tuesday when he was sent home after head-butting Jota. It isn’t clear what provoked the clash and it is understood that there was no tension between the pair prior to the incident. Regardless, his actions have spared Villa from the burden of paying his wages for a couple of weeks.

Drinkwater was more trouble than he was worth at Burnley too. His most notable act while at Turf Moor was getting battered outside a nightclub in Manchester after he cracked on to a Scunthorpe player’s girlfriend. He won’t have driven away from Bodymoor Heath last week since he is still banned from driving after admitting a drink-driving charge last May. Good luck finding another club, Danny boy.

To be fair, it wasn’t the first time Villa players had taken their frustration out on each other. Anwar El Ghazi and Tyrone Mings had handbags during the 0-0 draw at home to West Ham in September but Grealish said the matter was ‘put to bed’ immediately.

Mings tells it how it is, he walked off to avoid any unnecessary drama. Mings is not inthe wrong here, El Ghazi cant take being told off or criticism. Simple as. Plus no one should want to go against mings the guy is a tank! pic.twitter.com/6UAd5oca24

Manager’s job security:
Smith is clinging on to his job by a thread. Had it not been for his Villa background and the fact he signed a new four-year deal in November, he might well have been axed already.

The coronavirus may well have saved Smith from the dole queue. Reports last week suggested that after five successive defeats in all competitions, the boss needed a positive result from the game against Chelsea due to take place last weekend, but the Premier League’s enforced hiatus has spared Villa’s board a difficult decision.

Smith can point to plenty of mitigation for Villa’s struggles. Their recruitment hasn’t worked, for which sporting director Suso is equally to blame. He has been let down by some woeful individual mistakes and injuries have ravaged his squad. But the fact Villa have the worst defensive record in the Premier League despite John Terry’s presence alongside Smith, himself a former centre-back, is damning. For Christ’s sake, this Tottenham team managed 54 shots at Villa’s goal over two matches this term.

Big Sam was probably waiting for the call before the season was brought to an abrupt halt last week.

What they need in the summer:
It all depends on which division Villa will be starting next season. Whenever that might start…

Having spaffed a load of money against a wall last summer, relegation will force Villa to try and get as much of that cash back as possible. Even if they stay up, a re-think is required.

Villa’s first battle will be to hold on to the assets they would rather keep. Grealish is almost certain to go, while John McGinn will be looking to take the next step in his career if Villa can’t offer the midfielder a Premier League platform next term.

Then comes the matter of who dictates their recruitment policy. If Suso is on his way then how are transfer decisions being made? Christian Purslow has made a huge deal of Villa growing their own but their academy needs more time before they are reasonably expected to provide a stream of first-team-ready players.

Only after they have sussed which league they will be in, which players they can keep and how their transfers are done can Villa really focus on adding players to a squad which may or may not be managed by Smith.