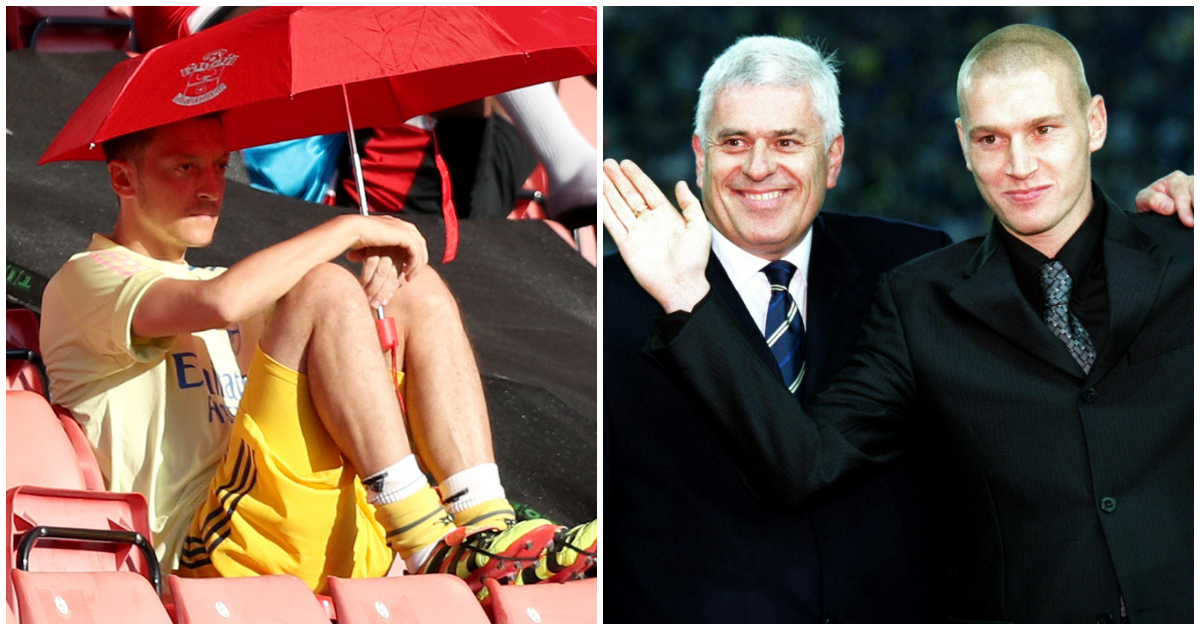 As Manchester United prepare to write off £89million on Paul Pogba and Barcelona ready themselves for a massive hit on Ousmane Dembele, we’ve looked at each Premier League side’s biggest transfer loss ever.

Arsenal: Mesut Ozil – £42.4million
Ozil, bought from Real Madrid in 2013, showed glimpses of being a steal as Arsenal’s record signing but they were fleeting and the Gunners ended up tearing up his contract when first Unai Emery and then Mikel Arteta decided he was more of a hindrance than a help.

Aston Villa: Darren Bent – £24million
Villa made Bent their record signing from Sunderland in January 2011 and at first the goals flowed. Then they didn’t, upon which time he was loaned out to Fulham, Brighton and Derby while Villa counted down to the expiry of his fat contract, when he joined Derby on a free.

Brentford: Andreas Bjelland – £2.25million
The Danish centre-back was Brentford’s record signing for £2.25million in 2015 but his three-year stay was initially beset by injures. The Bees offered him a new deal in 2018 but Bjelland chose instead to join FC Copenhagen where he remains on the books.

Brighton: Jurgen Locadia – £15million
Brighton lost around £12million on Alireza Jahanbakhsh having bought the Iranian winger for £17million prior to selling him to Feyenoord, but they got nothing back for Locadia, who joined Bochum this month after four largely miserable years.

Burnley: Robbie Brady – £13million
Somehow, Burnley got back almost half of the £15million they spent on Ben Gibson from Norwich but Brady, signed from the Canaries in 2017 for £13million, left Turf Moor for nothing last summer.

Chelsea: Fernando Torres – £48million
If you judge £50million signing Fernando Torres on his collection of silverware at Chelsea it really is quite difficult to argue with a Champions League, Europa League and FA Cup, as well as the European Championship with Spain as Golden Boot winner. But having all but £2million of his price wiped out within four years sums up the reality of his time at Stamford Bridge.

Crystal Palace: Mamadou Sakho – £26million
Liverpool also profited from Palace when they signed Sakho for £26million in 2017. For that huge outlay, Palace got just 59 Premier League starts out of the centre-back before he ran down his contract and moved to Montpellier last summer.

Everton: Yannick Bolasie – £25million
Everton got even fewer games out of ex-Palace winger Bolasie, with injuries and loan moves restricting the winger to just 32 appearances in five years.

Leeds: Seth Johnson – £7million
Leeds p*ssed away not only the entirety of the transfer fee it cost to sign him from Derby in 2002, but also around £20,000 a week the midfielder didn’t ask for but Peter Ridsdale gave him anyway

Leicester: Islam Slimani – £27million
Leicester have generally spent very wisely in the transfer market – but not on Slimani. The blew a club-record figure to sign him from Sporting Lisbon but the striker spent half of his five years as a Fox away on loan before he joined Lyon last year for free.

Liverpool: Adam Lallana – £25million
The Reds will be reasonably content with the value for money they got from having bought the midfielder for £25million in 2014. Before leaving for Brighton at the end of his contract, Lallana won the Premier League, Champions League, FIFA Club World Cup and Super Cup, even if his influence had dwindled prior to that trophy-laden run.

Manchester City: Eliaquim Mangala – £42million
Arguably City’s worst piece of transfer business ever saw them sign the centre-back from Porto for £42million, send him out on loan, give him a new contract to protect his value, then give him away anyway to Valencia in 2019.

Manchester United: Alexis Sanchez – £35million
Sanchez was actually swapped for Henrikh Mkhitaryan but United and Arsenal valued the players at £35million. United also paid him half a million pounds a week before letting him leave for Inter for free, as long as they picked up his salary. A dubious entry on this list, perhaps, but Paul Pogba will blow even this calamitous loss out of the water when the £89million signing leaves for f*** all at the end of this season.

Newcastle: Michael Owen – £22million
Real Madrid aside, not a single party involved in the deal that took Owen to Newcastle for £22million in 2005 doesn’t regret it. ‘I didn’t want to go there – my heart was still set on a return to Liverpool,’ he wrote in his autobiography. So close were Liverpool to his heart that he joined Manchester United for nothing upon walking out on Newcastle.

Norwich: Steven Naismith – £8.5million
The Scotland international arrived when Norwich looked to spend their way out of trouble in 2016 but he managed only 44 league appearances before being loaned to Hearts, who then took him for nothing when his lucrative deal expired at Carrow Road.

Southampton: Guido Carrillo – £19million
Jesus. Saints forked out a fortune to bring the striker from Monaco in January 2018, a sum they had to write off to get him off the books in October 2020 after no goals in just 10 appearances.

Tottenham: Moussa Sissoko – £28.5million
Sissoko’s £31.5million move from Newcastle in 2016 raised a few eyebrows, especially when he initially struggled at White Hart Lane. But he eventually settled and gave good service before leaving for Watford for £3million last summer.

Watford: Isaac Success – £12.5million
The Nigeria forward arrived as a club-record signing in 2016 and left for nothing to join Udinese. Handily for the Pozzo family, they own both clubs.

West Ham: Felipe Anderson – £28million
The Hammers smashed their transfer record to sign the Brazilian from Lazio in 2018 and initially the signs were positive. Then Manuel Pellegrini was replaced by David Moyes, who quickly decided he didn’t fancy the midfielder. After initially sending Anderson to Porto on loan, he returned to Lazio for around £4million, who laughed all the way to the bank with a £28million profit.

Wolves: Roger Johnson – £7million
After arriving from Birmingham for an undisclosed fee reported at the time to be around £7million, Johnson played a part in consigning Premier League Wolves to League One within his first two seasons by, among other things, allegedly turning up to training drunk. While on loan at West Ham and Sheffield Wednesday, the defender admitted: “I would probably give up a fair amount of money if I just walked out.” So Wolves escorted him off the premises in February 2015, a matter of months before his contract expired.