Home F365 Features Only Blades have slumped harder than Liverpool 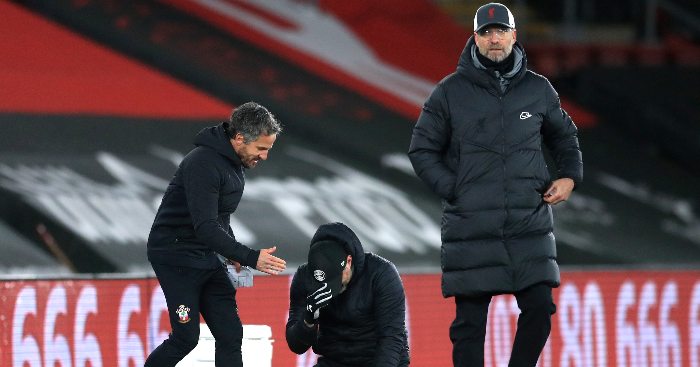 We’ve taken a look at which sides have made the most and least progress year on year. We’re talking percentages, because that’s fairer than simply counting points, especially with some sides having played fewer matches. Only seven teams have improved…

You have to have been a Liverpool supporter – or a Pompey fan – not to appreciate Ralph Hasenhuttl’s reaction to the final whistle on Monday night. The Alpine Klopp out Klopp-ed Jurgen Klopp with the kind of intensity we now expect from the Saints. It took Hasenhuttl and his side up to sixth – four points off the top – having sat in the relegation zone at the same stage last season. Their improvement is highlighted by the fact that Saints were fifth in the calendar year table, above Spurs, Everton, Arsenal, Wolves and Leicester. Only Man Utd, Man City and Liverpool won more games in 2020. There’s a reason why he ranked second in our 2020 list.

It got worse before it got so much better for Villa. They spent all but one gameweek after this time last season in a lower position, with 14 of them in the bottom three. Thanks largely to Jack Grealish, some astute recruitment, and a vastly improved defence, Villa are now looking up. Victories in their two games in hand would leave them a point off the leaders.

Everton’s 16th game last season came just after they had dropped into the bottom three but, mercifully, just before Carlo Ancelotti arrived to give them a shake.

Are they second, or are they joint-top? If they beat Burnley in their game in hand, they will go to Liverpool a week on Sunday as outright leaders. Which absolutely no-one saw coming.

Similarly, not many anticipated the Hammers’ improvement under David Moyes. Keeping them up was his brief last season; now with some savvy recruitment, West Ham are keeping pace with Frank Lampard’s expensively assembled Chelsea.

By this juncture last season, Spurs were three games into the Jose Mourinho era. They were 14th when he took over; now they have leapfrogged half the table to fourth place. A win in their game in hand against Fulham would take them to within a point of Liverpool. Harry Kane and Heung-min Son might have had something to do with it.

The last week and a half puts a very different spin on things for Arsenal. Three wins leaves them a single point better off compared to this stage last season, by which time Mikel Arteta was still one game from being appointed. Aim your fire at Frank Lampard now, nothing to see here…

Palace are Palace. Not much changes under Roy, does it? Aside from a one-point deficit making for a five-place fall in the table.

The table reflects similarly harshly on Wolves, but change is afoot at Molineux. After three years on a rapid upward trajectory, Nuno’s men have seen their progress checked somewhat since the end of last season. A change of system, personnel and, in some respects, style is taking some bedding in.

It’s been a bumpy start to the season but Pep Guardiola’s side are beginning to purr and they look ominous. Win their two games in hand and they will move above Liverpool, with only United seemingly better positioned.

And that’s the Burnley way.

A transfer spend of around £220million has reaped three fewer points and a fall of five places in the table. No wonder the Blues are starting to think of alternatives.

They aren’t in the bottom three, so that’s good enough for Mike Ashley. More was expected, though, of Newcastle after what appeared to be some smart summer recruitment, but Steve Bruce hasn’t yet been able to convince the Toon Army that he’s up to the job.

Leicester continue to get the plaudits but a seven-point deficit hasn’t had the impact on their placing that it perhaps should. But it is still 10 points more than they managed the previous season, before Brendan arrived.

The Seagulls haven’t helped themselves. Graham Potter’s men are yet to record a home win this season, with their last triumph on their own patch coming against Arsenal, eight games before the end of last season. But at least Potter has a new coat, having smartened himself up for 2021. They’re so much better at xG than actual football.

It was always going to be tough to build upon their splendid maiden season back in the Premier League, but a win isn’t much to ask for, is it? The Blades are now the first team in Premier League history to fail to win any of their first 17 matches. To be fair, they are still grafting for Chris Wilder, but they look appallingly impotent in attack and uncharacteristically porous at the back. You can get away with one of those flaws but both together is a recipe for disaster. It looks an uphill task to match Derby’s record low of 11 points in 2007/08.