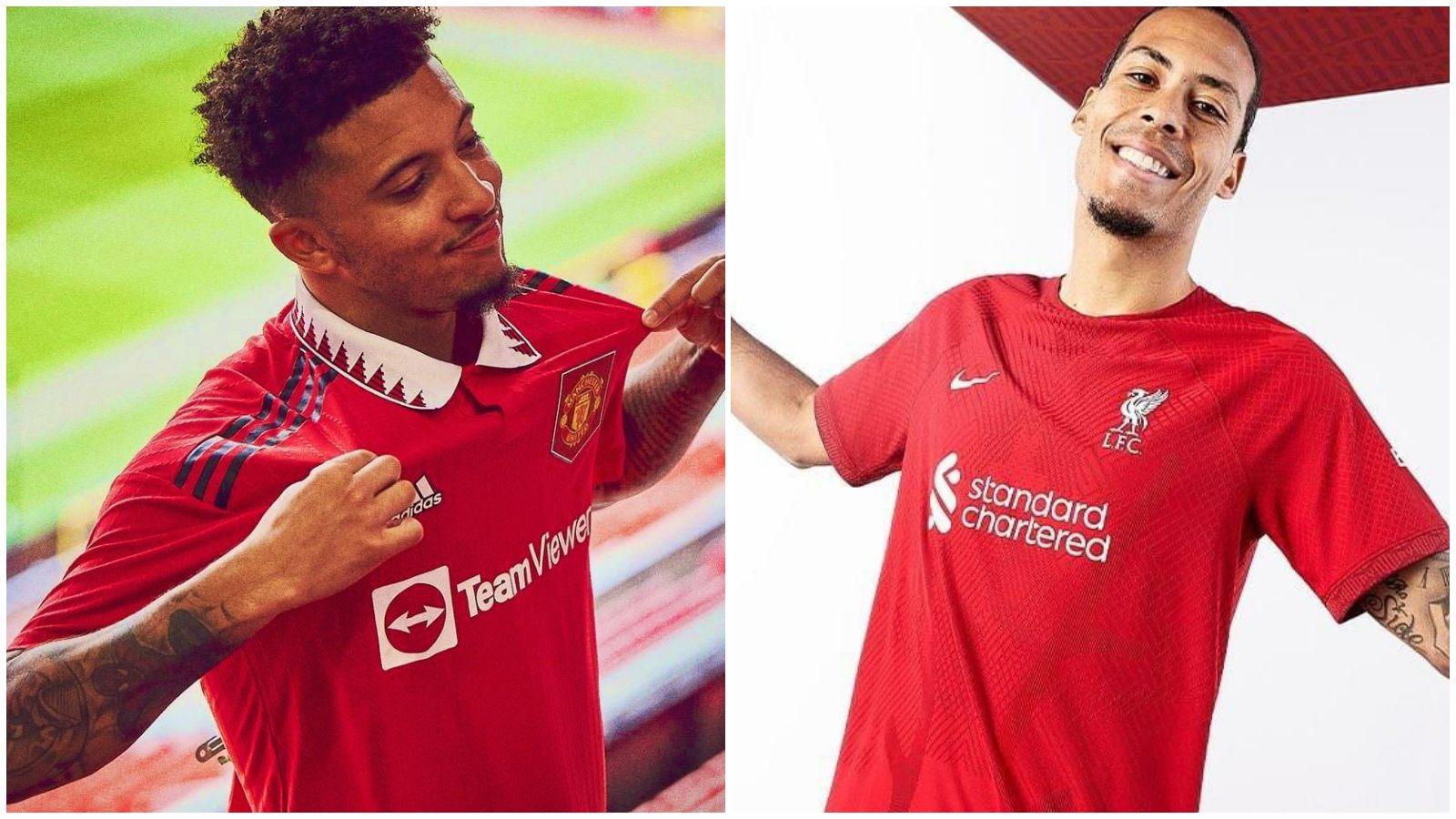 It’s that time of year when clubs attempt to sell their latest piece of overpriced polyester. Here’s how we’ve ranked the launches for bullsh*t and bluster…

20) Brentford
Good eggs that they are, the Bees are keeping their home kit from last year. “Our membership of the Premier League means that the income we receive from broadcast and commercial partnerships far outweighs the income we can generate from retail, therefore now is the perfect time for us to try something different without it having a material impact on our revenue.” It’ll never catch on.

19) Brighton
Brighton are changing their kits – they are yet to be unveiled or released – but the Seagulls, through their sponsors, have initiated a shirt recycling initiative that means 250 fans can get the new jersey for free if they exchange an old one from the last 10 years, which will be donated to KitAid.

Albion fans can get a brand-new shirt for free thanks to a new Buy-Back initiative from @AmexUK! 👕 #BHAFC

18) Fulham
No new kit yet from Fulham but we can exclusively guess that it will be white.

17) Leeds United
For Leeds it’s been easier to get new players than new kit this summer. It hasn’t been unveiled yet and Adidas say it won’t be on sale until next month – that’s as specific as they get. “As a result of unprecedented challenges over the past year, we expect to see a delay to Leeds United’s 2022/23 match and training wear,” said the supplier. Did they just forget?

16) Arsenal
Fair play to the Gunners, they led with the fact that £5 from every purchase of their new home shirt would go to The Arsenal Foundation. They couldn’t let the bullsh*t lie, however, with their new jersey, in ‘iconic Arsenal red’ – or ‘red’ to you and I – featuring a ‘striking new collar with lightning bolt design’. Though it isn’t referenced, we can only assume it’s a nod to the Nike kits of ’90s. Hard to be too sniffy, though, when a fiver from each shirt goes to charity.

15) Crystal Palace
Palace have only unveiled their new away shirt so far and, to be fair, we can’t be too triggered by their sales pitch. “The new white kit incorporates the club’s famous red and blue colours in an eye-catching central strip on the front of the shirt creating the effect of a painted canvas.” All that, it is. Macron are coming up some decent designs, with Palace having worn some nice shirts in recent seasons. Good for them; less so for pissy little features like this.

14) West Ham
West Ham’s latest spin on claret and blue is intended to ‘evoke memories of Julian Dicks, Trevor Morley and Ian Bishop’ while ‘taking inspiration from the iconic design worn by Billy Bonds’ promotion-winning team of 30 years ago’. ‘Iconic’ is a stretch, but it does bring to mind the old Bukta gear, even if it’d be better with the BAC Windows logo rather than yet another online bookie. Though you can buy a sponsorless version so there is scope to get the fabric pens out and draw it on yourself.

No issue with the premise of that, though you have to look really hard for the tower reference. And capping-up ‘club’ annoys us more than it ought to. As does the new sponsor, another gambling firm only two years after the club said that ‘in an ideal world’ they wouldn’t have to take cash from the gambling industry. Needs must, seemingly.

12) Leicester
Like Leeds, the Foxes have had some problems with Adidas too, but at least they have a shirt to unveil, and just over 6,000 to sell before full stock arrives next month. It’s a nice shirt too, even if Leicester have tried to disguise the fact it’s a template with some retro foxsh*t: “Combining features such as the prominent white collar and neck trim – synonymous with the Jimmy Bloomfield sides of the 1970s – and the popular ‘dynamic fox’ made famous by the likes of Gary Lineker and Alan Smith in the 1980s, the home shirt carries iconic elements of shirts of past eras.”

11) Newcastle
The Magpies have kept their home shirt blurb simple and relatively bullsh*t free. It’s got black and white stripes and it’s not awful to look at it. It’s the third kit which has attracted most interest, a white shirt with green trim that is a not-so-subtle tribute to their Saudi overlords. Of course, the accompanying guff makes no reference to that, or indeed anything else. And the club have tweeted about the new kit just once. Nothing to see here, lads.

10) Nottingham Forest
This season’s Premier League releases pay tribute to a stadium roof, a drunk tank, and in Forest’s case, a river crossing: “The history-making shirt is steeped in Nottingham Forest traditions with the design inspired by the ironworks pattern of the iconic Trent Bridge,” said the club upon unveiling a ‘Garibaldi red’ jersey. “Known to football fans around the world, crossing Trent Bridge is a journey that has been made by hundreds of thousands of Forest fans dating back to the club’s move to the City Ground on 3 September 1898. The two-tone Trent Bridge pattern is featured on the red shirt sleeves and it is complemented, for the first time in 23 years, by Premier League badge.” It’s certainly better than a template, and even better that it can currently be bought without a sponsor since Forest don’t appear to have one.

9) Wolves
Some disappointingly half-arsed fluff from Wolves, who seem to be patting themselves on the back for not picking the wrong colour on the palette: “Following detailed colour matching and dyeing, the true Wolves gold has once again been realised, while the matte shine fabric to the reverse emulates flow and movement on the pitch and back neck taping provides a more personal touch.” That fabric has its work cut out to ’emulate flow and movement’ while it’s draped on 24-stone Big Baz from the Black Country.

8) Chelsea
The Blues new home kit ‘pays homage to one of the most important figures in the club’s history, Ted Drake’. How so? Apparently, the blue shirt, like any other Chelsea chemise, comes with ‘several features a nod towards the innovative changes he made in modernising the club’. As homages go, it’s one of the most subtle we’ve seen.

7) Bournemouth
While producing their own zig-zag design, the Cherries have also conjured up some weapons-grade bullsh*t, with the new shirt apparently a tribute to the roof at Dean Court: “Inspired by and reflective of the club’s architectural stadium pillars, the striking new home kit also gives a nod to the past in the style of the iconic kits from the early nineties.” Bournemouth get brownie points, though, for offering the adults replica shirt without the gambling sponsor on the front.

6) Manchester City
City have a smart new home kit, with a prominent maroon trim, and while it’s hanging off Erling Haaland’s shoulders, they probably don’t have to try too hard to shift it off the racks. But that’s exactly what they’ve done: “The new kit takes its inspiration from the fearless City teams of the late 1960s – but also from the man our fans nicknamed ‘Colin the King’. From 1967 to 1971, no team could match the style and swagger of Manchester City.” The team in red across Manchester who won the European Cup might have something to say about that. They continue: “Half a century on, that team still inspires the new generation of players.” Do they? Really?

5) Tottenham
The Spurs home kit launch even has its own motto: ‘dare to do true’. Which feels like a lot of fuss for another Nike near-template, even if Tottenham will tell you that the new jersey – white, shockingly – brings ‘a sense of authenticity and togetherness amongst our fans’. You’re just not Spurs if you haven’t shelled out £75 for a some recycled polyester that will be half-price in nine months.

4) Manchester United
United have gone very, very big on the fact their new shirt has a collar, seemingly ignorant of the fact that so too have most of Adidas’s top-tier clubs, like Arsenal and Real: “Throughout the years, a number of United kits have featured polo collars, and many have cemented their status as cult classics. The collar is deeply rooted into the legacy of this great club, and so are many of the legendary players who have worn them too… the white collar features an evolved red geometric design, which references the symbolic ‘M’ detail which featured in our third kit from last season, and the famous ‘Snowflake’ jersey from the 1990-1992 seasons.” Can someone please look at the shirts they’ve referenced and tell us what the f*** they’re on about.

‘Subtle chevrons within the fabric represent the impressive honours won throughout the club’s prestigious history. Ergonomic panelling and the classic claret and blue colour palette draw inspiration from the sophisticated and understated style of the club.’

Sophisticated and understated… aye, that’s what springs to mind when we all think of the Villa. And someone at Castore will have to talk us through those representational chevrons.

Every journey starts with ambition…

2) Southampton
Saints are expecting a lot from what is essentially a £55 piece of polyester. This one takes its inspiration from the early 1980s, with what they describe as ‘a dramatic stripe’ down the middle. Dramatic how, we’re not sure. In vogue with the architecture theme running through the Premier League, Saints’ shirt also features ‘stanchion graphics/detail from St Mary’s’. Then we get to the freshest, steamiest bullsh*t: ‘This shirt symbolises Southampton’s desire to stand out, whilst also inspiring fans to be brave, regardless of their background.”

1) Liverpool
‘Inspired by the attitude of ‘Scouse solidarity’, the bold, no-nonsense design reflects the mentality of its people, a mentality that makes Liverpool unique.’ Lads, it’s a red shirt. And not a particularly unique red shirt – it’s almost a template design. This template design means more, though, obviously. Why do they do this?