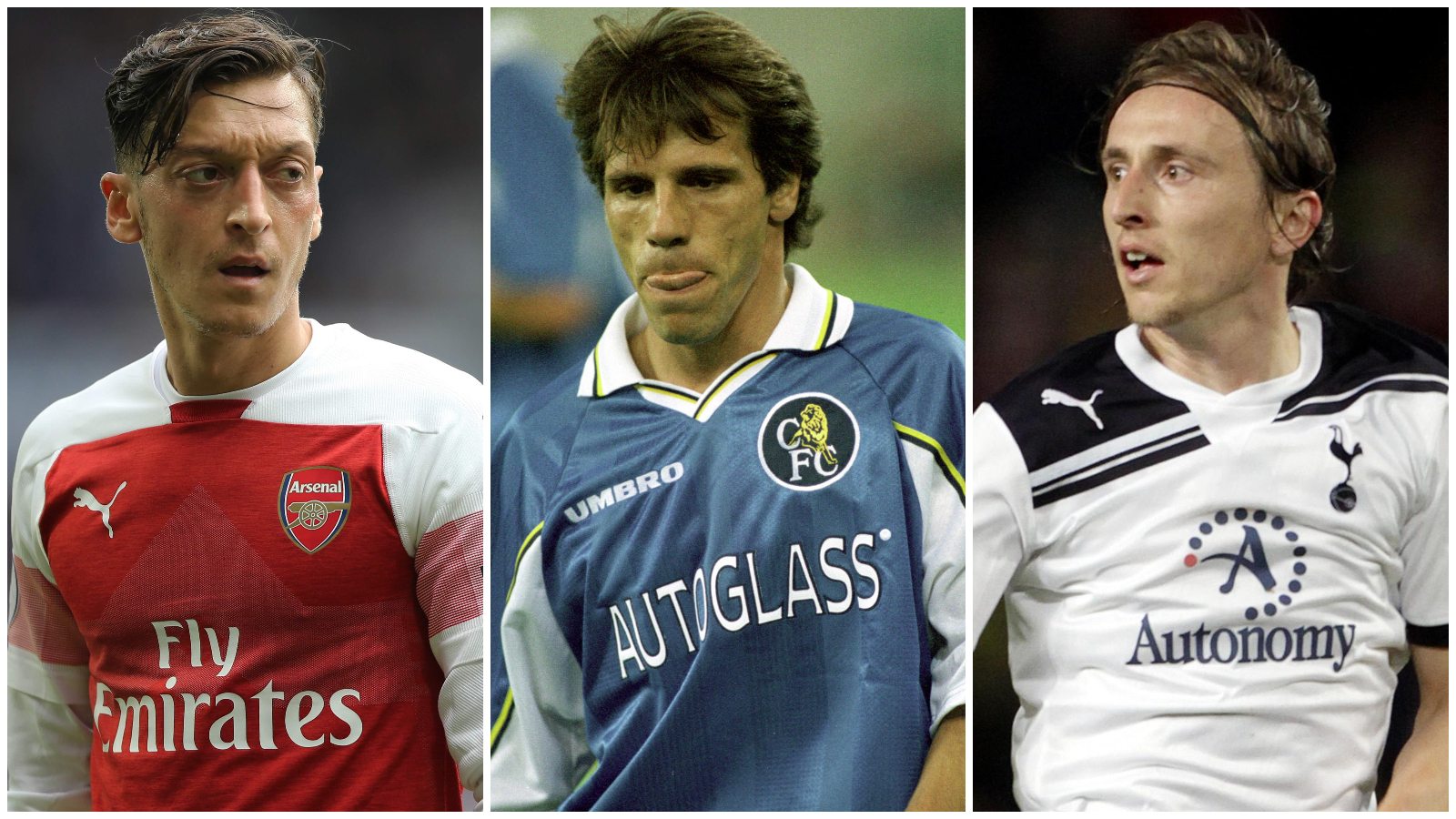 Luka Modric, Gianfranco Zola and Mesut Ozil feature among some frightening talent in this XI that never impressed the PFA enough to be selected in the Team of the Year…

The PFA Team of the Year has been named, with over half of the XI made up of Liverpool players.

As the Premier League’s joint-top scorer, Son Heung-min might be feeling hard done by to miss out but at least the Tottenham star can reflect on previous inclusions. This lot never made the XI even once…

GK: Pepe Reina
It was a coin toss between Reina and Hugo Lloris for who takes the gloves in this XI ignored by their fellow pros. The former Liverpool keeper kept 136 clean sheets during his Premier League career – only five stoppers achieved a greater number – and was voted Liverpool’s Player of the Year in 2009/10 with 75% of the vote. But a young Joe Hart was named in the PFA Team of the Year that season after a stellar campaign on loan at Birmingham.

RB: Cesar Azpilicueta
The Chelsea captain has played 10 seasons in the Premier League, achieving a remarkable level of consistency, but that hasn’t impressed PFA members enough to vote him into their XI. Even when Azpilicueta was named Chelsea’s Players’ Player of the Year in 2013/14, Seamus Coleman got the nod at right-back.

LB: Nigel Winterburn
The ex-Arsenal left-back played over a decade in the Premier League as well as 178 games in the old First Division but he was ignored in the voting for the PFA XI. In the Prem era, Winterburn lost out to Denis Irwin and Graeme Le Saux a couple of times each, as well as Tony Dorigo, Alan Wright and Stig Inge Bjornebye. The fella who replaced Winterburn at Arsenal, Sylvinho, played two seasons at Highbury and made the PFA Team of the Year in 2001. It doesn’t seem fair.

CB: Steve Bruce
Winterburn wasn’t the only Arsenal defender perennially ignored by the pros. Neither Steve Bould nor Martin Keown ever made the PFA XI either. But at least they were capped by England. Bruce never was and nor was he ever in the Team of the Year. His defensive partner, Gary Pallister, was a five-time call-up and won the PFA Player of the Year in 1992.

CB: Ricardo Carvalho
Carvalho, like Bruce, was always in the shadow of his defensive partner, with John Terry a four-time PFA Team of the Year inclusion. But his Portuguese mate was consistently overlooked, despite winning Chelsea’s Player of the Year in 2008. Fernando Torres had it right: “Terry is captain, so he gets a much higher profile. But he’s second to Carvalho. Ricardo is superb.”

CM: Michael Essien
Every team needs a holding midfielder, but never did the PFA feel the need to include in their XI any of Essien, Claude Makelele or Gaz Baz, the player to have played more Premier League games than anyone else. During his Chelsea pomp, Essien was overlooked in central midfield for Steven Gerrard (five times), Frank Lampard, Paul Scholes, Cesc Fabregas, Ryan Giggs, Darren Fletcher, Samir Nasri and Jack Wilshere.

CM: Luka Modric
Xabi Alonso is ignored yet again here, with Modric getting the nod in central midfield, which is more than he ever got from the PFA. Even in 2010/11, when he was voted Tottenham’s Player of the Season and pinpointed by Sir Alex Ferguson as the Premier League’s best, it was Nasri and Wilshere in the PFA team, while team-mate Gareth Bale was the pros’ pick for Player of the Year.

RM: Freddie Ljungberg
The ex-Arsenal midfielder, a lynchpin of the Invincibles, was named by the Premier League as their Player of the Season in 2001/02 as well as the Premier League’s Overseas Team of the Decade. But Ljungberg didn’t catch the eye of his fellow professionals, who voted instead for Robert Pires and Patrick Vieira alongside Giggs and Roy Keane in their midfield.

LM: Mesut Ozil
Since the PFA Team of the Year has been presented in a 4-4-2 for the majority of its lifespan, then so should the Overlooked XI. So we’re sticking Ozil out on the left flank. The 2015/16 season, when he made more assists than anyone and won Player of the Month twice, was probably the German’s best campaign for Arsenal, where he was named Player of the Year. But the PFA opted instead for a midfield of Riyad Mahrez, Dele Alli, N’Golo Kante and Dimitri Payet.

FWD: Gianfranco Zola
Before it was done online, the PFA ballot used to take place a couple of months before the end of the season. Even now, the fact voting closed a fortnight before the final day reportedly p*ssed off Manchester City players worried that Kevin De Bruyne might be overlooked. That was a fate that befell Zola in 1997, when he became the first player to win the FWA Player of the Year despite not playing a full season. He joined Chelsea in November 1996, which left only a few months before the players scribbled on their voting forms. The fact that goalscoring wasn’t the greatest of Zola’s many assets perhaps held him back in the six years that followed since only two striker spots were up for grabs until 2018.

FWD: Robbie Fowler
Robert Bernard Fowler was a natural born goalscorer, but that didn’t help him when it came to the PFA XI. The Liverpool striker scored 28 Premier League goals in 1995/96 after 25 the season before. But he missed out on partnering Alan Shearer in both years, with Chris Sutton and Les Ferdinand getting the nod despite scoring 10 and three goals fewer respectively.