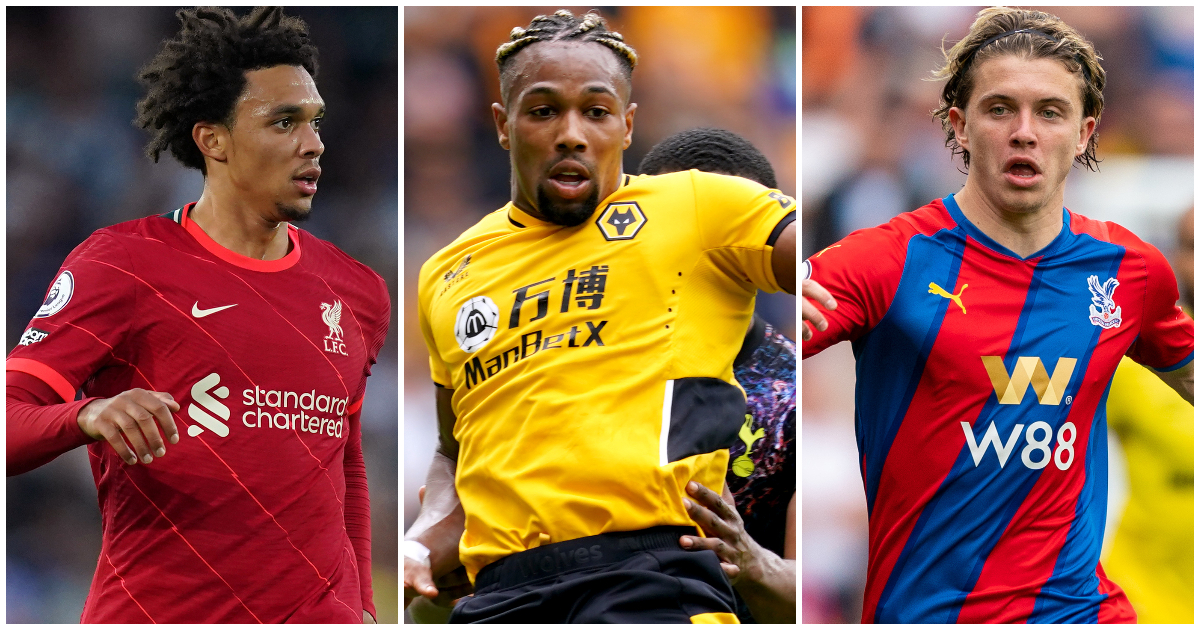 The Premier League season is a month old, so we’ve picked out every club’s best player so far according to WhoScored ratings. None have been better than a Wolves winger…

Arsenal: Takehiro Tomiyasu – 7.32
Just the demonstration of a smidgen of competence would have made Tomiyasu stand out on his debut against Norwich on Saturday when compared to the previous performances of his new teammates. The defender won seven aerial challenges in his 62 minutes against the Canaries. The highest average per game elsewhere this season is Christian Benteke on 6.8. Arsenal’s highest-rated player to have made more than a single appearance is Nicolas Pepe.

Aston Villa: John McGinn – 7.28
Ditching the ‘Deliveroo and Tennants’ seems to be working for the Villa midfielder, especially if his all-action display at Chelsea is any indication. Saul Niguez will be seeing McGinn’s mug when he closes his eyes to sleep for a few more nights yet. New boy Emi Buendia ranks second.

Brentford: Ethan Pinnock – 7.15
The Bees defender seems to be taking the leap up to the Premier League in his stride, just as he has every other step between Dulwich Hamlet and the top flight, with stops at Forest Green Rovers and Barnsley along the way. The only centre-back to have made more interceptions this season is Everton’s Michael Keane.

Brighton: Shane Duffy – 7.61
It’s been some recovery from the Republic of Ireland centre-back. Duffy’s Brighton career looked finished when he was sent to Celtic on loan last season, even more so when he stank out Parkhead. But since the sale of Ben White, the 29-year-old has earned back his place and started all four games so far, contributing a goal to set the Seagulls on their way to victory against Watford.

Burnley: Dwight McNeil – 7.64
The Clarets would be an even tougher watch without the 21-year-old. McNeil was named in WhoScored’s best Under-21 XI in Europe for August – but not our best Under-23 XI in the world right now – and among his Burnley team-mates, no-one to have played more than a single half of football has a better pass success rate.

Chelsea: Romelu Lukaku – 7.89
No-one doubted that Lukaku would score goals back in the Premier League but he has slotted into Thomas Tuchel’s system effortlessly. Only Michail Antonio, Sadio Mane and Cristiano Ronaldo (who played one game – against Newcastle) have averaged more shots per game, and only four players to have made more than one appearance have a higher average rating.

Crystal Palace: Conor Gallagher – 8.02
The Chelsea loanee has started the season on fire, with two goals and an assist in his first three games. Patrick Vieira has clearly encouraged Gallagher to get forward and shoot on sight since he ranks in a top 10 dominated by centre-forwards for shots per game, narrowly behind Bruno Fernandes.

Everton: Dominic Calvert-Lewin – 7.68
Feeding off the service offered by Everton’s new wingers, three goals in three games was a fine start to Calvert-Lewin’s season before injury struck. Everton didn’t miss the centre-forward against Burnley, but they will also be without him for games against Villa, Norwich and perhaps Manchester United.

Leeds: Raphinha – 6.8
It speaks of Leeds’ form that Raphinha is the worst of the Premier League’s best players, with the lowest rating of anyone to make this list. Their defending has been wretched and only Patrick Bamford can claim to have been involved in more than a single goal. Should we be surprised if they have got a dose of second season syndrome?

Leicester: Marc Albrighton – 7.19
Albrighton could have gone to Burnley in the summer, but he chose to sign a new three-year contract instead and though the 31-year-old’s days in the Foxes first XI may be limited, he is certainly making the most of them. Which is lucky for Brendan Rodgers since too many of his other key creative influences are out of form or only just returning from injury.

Liverpool: Trent Alexander-Arnold – 8.02
Full-back, midfielder, whatever…Alexander-Arnold has been named Man of the Match in half of the games he has played this season. Only one player not named Ronaldo has a higher average rating this term than the 22-year-old who leads the Premier League – by some distance – for key passes.

Manchester City: Jack Grealish – 7.64
The £100million man has taken no time to bed in at City – you’d expect not given the fee – and Pep Guardiola has used only four players for more minutes than Grealish. The England star has made more key passes than any City player, with Alexander-Arnold the only Premier League player to make more.

Manchester United: Cristiano Ronaldo – 8.61
Of course it’s Ronaldo. With United these days, the answer is always Ronaldo. Unless the question is: who’s United best player to have played more than one game against a sh*te Newcastle side? To which the reply would be Paul Pogba and his many assists.

Newcastle: Allan Saint-Maximin – 7.55
How long before Saint-Maximin decides he’s sick of this sh*t and Mike Ashley realises there’s a few quid to be made? The Toon Army should treasure him while they can.

Norwich: Brandon Williams  – 6.93
Norwich’s full-backs lead the way, with loanee Williams pipping Max Aarons to top spot. Williams, though, hardly needed to do much to stand out after arriving immediately after the Canaries conceded the same goal four times from their left against Man City.

Southampton: Mohammed Salisu – 7.31
Salisu there, finally proving Daniel Storey right. Sort of. The defender has been named Man of the Match in two of Saints’ matches so far, having not featured in a side last season that kept a clean sheet. Salisu has started all four of Saints matches this term but there is still plenty of work yet to do. “He is not in Vestergaard’s department with the ball, but we want to improve him,” said Ralph Hasenhuttl after Salisu shackled Michail Antonio on Saturday.

Tottenham: Son Heung-min – 7.4
Son started the season in fine form and his importance was elevated by his absence at Palace on Saturday, when Tottenham were absolutely wretched without his drive and creativity. Nuno can only hope Son makes a miraculous recovery before Chelsea arrive in north London on Sunday.

Watford: Emmanuel Dennis – 7.7
The former Club Brugge striker has weighed in with a goal and an assist in his first four matches, earning himself the Hornets’ Player of the Month in the process. Though that was hardly a crowded field in which to stand out…

West Ham: Michail Antonio – 7.84
The Hammers’ highest Premier League scorer even had enough credit in the bank to withstand a red card at Southampton and fend off Declan Rice into second place. Johnny Nic loves him.

Wolves: Adama Traore – 8.14
We conclude with the highest-rated player of the Premier League season so far. Four games, four man-of-the-match performances from Traore, who might have been playing for a move before the deadline but he hasn’t allowed his standards to slip since. Not when January is but a mere three and a half months away. Trore has attempted 45 dribbles, completing 38 of them. The next most successful dribbler is Saint-Maximin on 20.