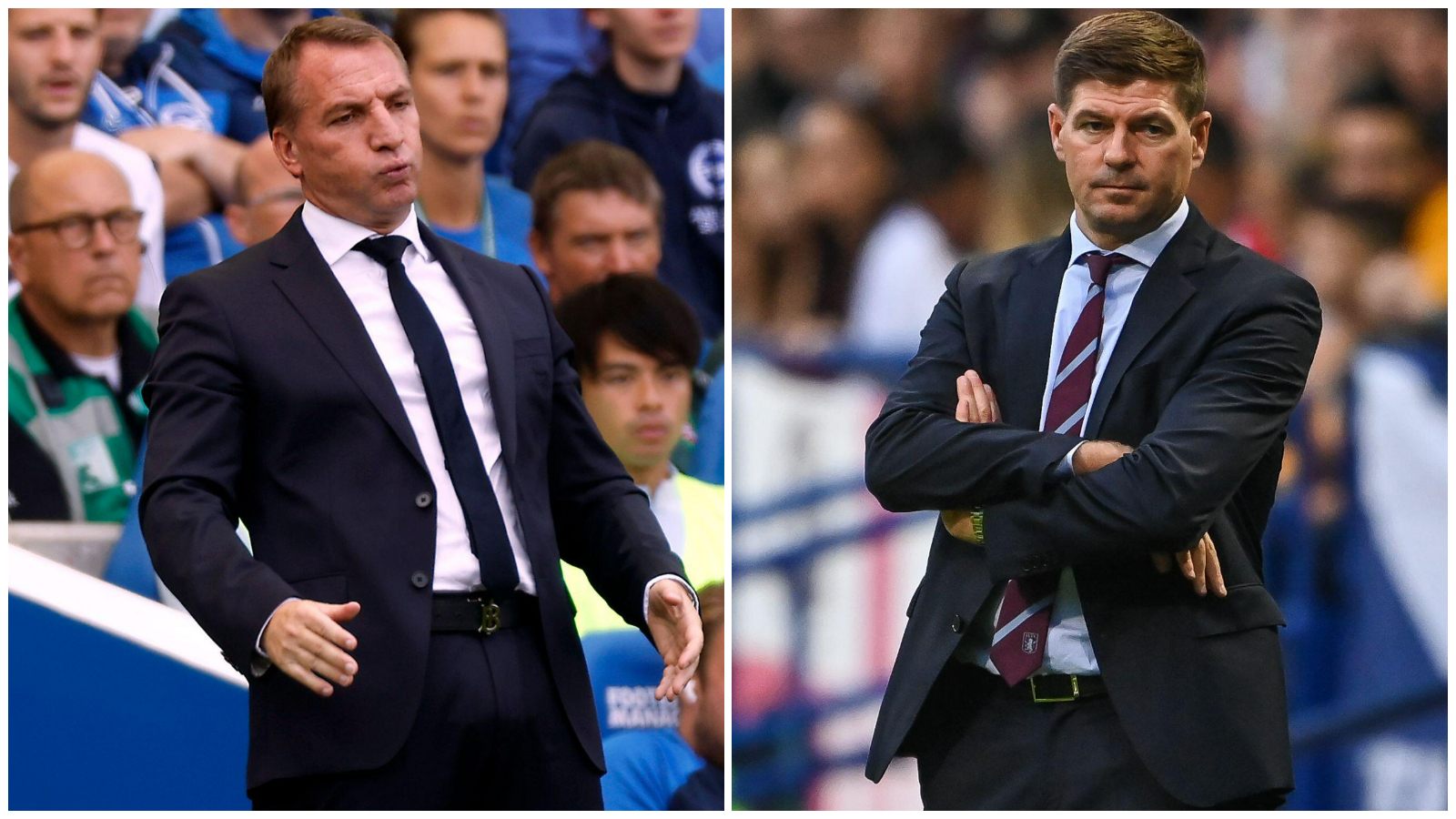 Are Leicester playing for Brendan’s job at Tottenham? Villa could also make Steven Gerrard’s international break more comfortable, and we demand a debut for Diego Costa…

Game to watch – Tottenham v Leicester
Granted, it’s not quite the Big Weekend we were looking forward to.

If all the matches were going ahead, Leicester’s trip to Spurs might not scrape into the Premier League’s top three games, with Chelsea’s clash against Liverpool and Leeds going to Manchester United more eagerly anticipated by most.

Even Brighton and Palace fans would make the case for their grudge match being bigger than the Saturday evening kick-off between a team that is yet to lose and one yet to win.

Being the form team, Spurs ought to cruise past the Premier League’s bottom-placed side but Antonio Conte’s men showed their vulnerabilities in their first defeat of the campaign, a potentially costly late collapse at Sporting Lisbon in the Champions League on Tuesday evening.

More vulnerable than most at Spurs is Heung-min Son. The South Korean shared the Premier League’s Golden Boot last season but this term, he’s yet to register a goal or an assist. He looks absolutely knackered and talk of dropping Son, an unthinkable prospect not long ago, is getting louder, especially while Antonio Conte has Dejan Kulusevski – who looked dangerous as a substitute in Lisbon – champing at the bit.

Brendan Rodgers would kill for Conte’s problems right now. Leicester have a single solitary point and fans are turning against the manager. On paper, there was no shame in losing by the odd goal to Chelsea and Manchester United but in both games, the Foxes lacked the aggression and seemingly the belief they oozed before a summer that has left everyone at the King Power down in the dumps.

The same was true of their visit to Brighton, who really rubbed Rodgers’ nose in it. As the manager and players acknowledged the away fans at the AmEx, a white bedsheet emerged with ‘RODGERS OUT’ scrawled across it. A few weeks ago, the Northern Irishman might have attributed it to the odd loon, but Rodgers cannot deny now that opinion is turning against him, however much his hands might be tied.

The international break comes at a bad time for Rodgers. There has been little appetite for change among the Leicester hierarchy but the Foxes need pulling out of their slump quickly. It might not be must-win for Rodgers, but another meek surrender similar to the Brighton debacle may see the Leicester owners’ stance shift.

Manager to watch – Steven Gerrard
It has been a rough start to the season for managers in Midlands, with Gerrard feeling the heat at Aston Villa too.

At the start of the season, many presumed it would be Ralph Hasenhuttl’s employability on the line ahead of Southampton’s trip to Villa Park on Friday night, but Saints have showed enough through a difficult start to the season to delay their manager’s retirement for now.

Gerrard is probably safe-ish in the short term too after his Villa side held Manchester City a fortnight ago. But against Saints, the Holte End expects. Their good work against the champions will be swiftly forgotten if Villa revert to the form that saw them booed off after losing at home to West Ham.

Gerrard remains vulnerable as there are few excuses for their poor start to the season. Villa backed their manager in the transfer market and got most of the deals done early. Gerrard had plenty of time to piece his side together but it still feels as though Villa are yet to settle on a preferred side or shape.

Imposing themselves upon Southampton and beating them is a different challenge for Gerrard to stopping City. That was perhaps a bonus point for Villa. Three are expected against Saints.

Player to watch – Diego Costa
If a North versus South Premier League All-Star game were to take place, each side would probably leave the Midlands to the other if it was based on Leicester, Villa, Forest and Wolves’ current form.

At least Wolves have tried to lift the gloom in the Black Country this week. The signing of Diego Costa is very much one we are here for. The Sh*thouser’s Sh*thouse returned to the Premier League, presumably after snarling hard enough at the suits responsible for work permits to scare them into approving his appeal.

We have no idea if Costa will face Manchester City on Saturday. The fact he hasn’t played a competitive game this year doesn’t bode well but reports suggest he took part in full training this week and he has an outside chance of taking on the champions, especially since Bruno Lage is short in attack.

The Brazilian doesn’t strike us as a player who needs all the physical and mental frameworks in place to play and petrify opponents – Costa probably holidays in the red zone. Against a City defence that is not currently as secure as it has been, a cameo off the bench would be well worth tuning in for.

Diego Costa to Wolves: a challenge to the notion that the perfect transfer doesn’t exist

Team to watch – Everton
On the face of it, things are going no better for Everton than any of the aforementioned Midlands sides. Like Leicester, the Toffees are yet to win this season. But there is considerably less gloom around Goodison Park, even after their relegation scare last term.

Their current points tally suggests Everton haven’t learned their lesson, but while they haven’t won, they’ve lost only twice – to Chelsea and at Villa when they ought to have taken at least a point. Since then they have strengthened, most notably in midfield, and in reasonable chunks during their last four games – all draws – they have been good to watch.

The last of those stalemates came in the Merseyside derby when Everton took the fight to Liverpool. As you would expect. But there was enough in that performance to offer plenty of encouragement that their first win is just around the corner, perhaps when West Ham turn up at Goodison on Sunday.

It promises to be an intriguing battle in the middle of the park when both managers face former sides. Tomas Soucek and Declan Rice are formidable opponents for anyone, especially since the former has rediscovered his form, but Frank Lampard’s engine room is now equipped to cope. Amadou Onana has made a hugely promising start to his Everton career, while new boys Idrissa Gueye and James Garner may have to wait patiently since Tom Davies and Alex Iwobi seemed against Leeds and Liverpool to take inspiration from the new threats to their places.

Jordan Pickford’s absence is a blow but Lampard must be hopeful of relying on his keeper less than he had to against Liverpool. The derby intensity must be maintained, though, if Everton are to avoid going into the international break without a win to their name.

EFL game to watch – Middlesbrough v Rotherham
Don’t pretend you’ve anything more exciting to do on a Saturday night than watch Rotherham go to Middlesbrough.

For Boro, and Chris Wilder, this is a biggie. The manager needs his players to buck up after they caved in to Cardiff in midweek. Boro responded in the second half but it was too little, too late after going in 3-0 down at half-time.

The start of the season has gone rather more swimmingly for Rotherham. Paul Warne’s side have lost one of their first eight and while they’ve drawn half of those matches, they would be third had they won the game in hand they have over the eight teams currently above them in the table.

At the start of the season, most would have expected Boro and the Millers to occupy each other’s positions. Boro’s current place is unacceptable and Wilder needs a swift reaction.

European game to watch – Atletico Madrid v Real Madrid
Real take their perfect record – the only one remaining in Europe’s big five leagues – across Madrid for the derby against Atletico on Sunday night.

The European champions have won every game, domestically and in Europe, so far this season but Diego Simeone will put their credentials under serious scrutiny, especially with doubts over Karim Benzema’s fitness.

Atletico have injury problems of their own, especially at the back, with Jan Oblak, Stefan Savic and Jose Giminez facing late fitness tests. All three were missing in midweek and it certainly showed when Atletico were beaten at Bayer Leverkusen.

Simeone will just be hoping to stay in the game until around the hour mark, upon which time he is allowed to play his Antoine Griezmann card.