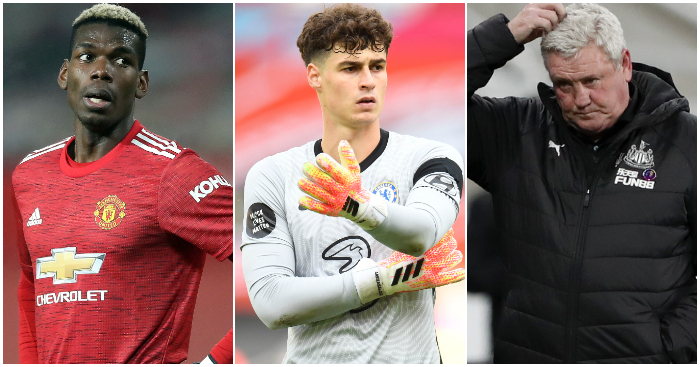 Johnny Nic ran through his list of Premier League personalities who made 2020 marginally less sh*t. But for these individuals, it has been a pig of a year…

ARSENAL – Mikel Arteta
This isn’t how it was supposed to go. Pep’s protege was given the reins at the very end of 2019 but a year into the gig, Arteta has overseen Arsenal’s worst start to a Premier League season in 46 years. A couple of wins have afforded the manager – a promotion he was gifted this year – some respite but still the Gunners are 13th. They were 10th when he took over and that was deemed not good enough. Still, Arteta can point to an FA Cup win, which feels like years ago, and the young players offer some encouragement for 2021. But he is still lumbered with a lot of dross and a faction of senior players who apparently are #teamOzil.

ASTON VILLA – Tom Heaton
The Villa keeper was in splendid form before he sustained a serious knee injury on the first day of 2020. Since then, Heaton has had to sit and watch Emiliano Martinez help to transform the Villa defence while his England career slips further into the rear-view mirror.

BRIGHTON – Mathew Ryan
The Australia keeper began 2020 as Brighton’s undisputed No.1 but he ends it behind Robert Sanchez and Jason Steele, looking for a new club having been told he is free to leave the AmEx. Ryan will be hoping any potential employer is willing to look past the fact he currently has the lowest save percentage in the Premier League.

🗣"Sometimes you think you need a change of dynamic"

Brighton manager Graham Potter says goalkeeper Mathew Ryan has been a fantastic servant for the club after he was left out against Fulham pic.twitter.com/lcPqvUZ20O

BURNLEY – The physio
The Clarets’ man with the bucket and sponge has been overworked in 2020. Since the Premier League restarted, Sean Dyche has seen his plans hampered by a spate of injuries and while things look to be easing now – and they aren’t the only club to suffer more fitness problems than usual – the absences have hit Burnley hard. Towards the end of last season, Dyche struggled to fill his bench, and key players like Ben Mee, Johann Gudmundsson and Jack Cork have all missed stretches of matches.

CHELSEA – Kepa Arrizabalaga
The world’s costliest keeper can’t say he wasn’t warned. Frank Lampard dropped Kepa for a four-game stretch back in February but with only perennial stand-in Willy Caballero available to replace him, the gloves were handed back to the Spaniard. He dropped them. Chelsea then bought Eduoard Mendy and without a very expensive hologram behind them, Lampard’s defence suddenly started churning out clean sheets.

CRYSTAL PALACE – Max Meyer
It’s not clear what’s worse: Meyer’s timing or his form. The midfielder was just getting a run under Roy Hodgson before an ankle injury kept him out of the draw at Manchester City in January. He returned for three games – all defeats. Then he sat out another four – all Palace wins. Back he came for four games in five – all  defeats again. So it’s no surprise that Hodgson hasn’t let Meyer near the pitch this season.

Max Meyer is the most technically gifted player on the books at Palace and we’ve been starved of a potential cult hero because of a manager’s stubbornness a refusal to change, halting any progress. https://t.co/yaZxDHYRln

EVERTON – Jordan Pickford
Carlo Ancelotti’s arrival prompted huge improvement from many Everton players but the Italian failed to sprinkle his magic in Pickford’s direction. The Everton keeper remains England’s No.1 but only because, as Gareth Southgate said in November, “there is nobody who I think is challenging seriously at the moment to push him out”. Ancelotti had a word back in July: “He’s not doing well… For the quality that he has, and he agreed, he has to be better.” Since then, Pickford was dropped ‘for the first time in seven years’ and his most telling contribution has been to kick Virgil Van Dijk onto the sidelines.

FULHAM – their penalty takers
Fulham aren’t in a position to be pissing points up a wall and had they had more competent spot-kick specialists, they would almost certainly be five points and three places better off. Aleksandar Mitrovic, Ademola Lookman and Ivan Cavaleiro between them wasted three penalties in five weeks through October and November, with Lookman’s miss especially infuriating. For Mitrovic, it has been a cursed year from the spot. He missed against Swansea in February (though he atoned with a 94th-minute winner) and after blazing one over against Sheffield United in October, a few weeks later he saw David Marshall keep out his shoot-out attempt to cost Serbia a place in the European Championships.

LEEDS – Their Twitter admin
Leeds can’t fathom what all the 2020 fuss is about – they’ve had a belting year. So it’s a shame that it’s ending amid controversy because their social media admin was riled by one pundit’s comment after a fantastic win. The prick.

Prick of the Week no.15: Leeds Twitter and the Carney Code

LEICESTER – Demarai Gray
The former England Under-21 winger was given a few minutes at the end of Leicester’s draw with Palace this week just to remind everyone of his existence. Gray hadn’t even made the bench prior to the trip to Selhurst Park and Brendan Rodgers has made it clear he’s done with the 24-year-old.

LIVERPOOL – Joel Matip
Virgil van Dijk has had a stinking end to the year, much like Joe Gomez. But Matip’s injury misery has been on and off throughout the whole of 2020. Under the old rules, the Cameroon centre-back wouldn’t even have earned a Premier League winner’s medal having not managed 10 games during the Reds’ march to the title. As it was, even Andy Lonergan got one and this season, when Jurgen Klopp has really needed him, Matip has kept breaking down.

MANCHESTER CITY – Aymeric Laporte
The French defender has gone from being regarded as City’s best centre-back to playing back-up for John Stones, who was a shoo-in for this list before a surprising renaissance which has seen the ex-England centre-back start five of the last six Premier League matches, keeping clean sheets in all. But Laporte, who was injured at the start of the year, is now out in the cold amid reports his relationship with Pep Guardiola is ‘fatally strained’.

MANCHESTER UNITED – Paul Pogba
Aaron Wan-Bissaka has hardly had a stellar year, but at least he’s not being held against his will and forced to break sweat occasionally when Ole Gunnar Solskjaer decides Fred needs a breather. Pogba had big plans for 2020, which involved having the first few months off before doing the bare minimum to earn his France place at Euro 2020. There he would preen like a peacock, get his move to Real Madrid and leave this godforsaken place behind. But he finishes 2020 as he started it: In Manchester, still dreaming of Madrid.

NEWCASTLE – Steve Bruce
In charge of his hometown team but he’s not Rafa Benitez so very few of his Geordie brethren actually want him there. Illustrated by the comments on Newcastle’s tweet wishing their boss a happy 60th birthday…

SOUTHAMPTON – Mohammed Salisu
‘An absolute steal at £11m. Bigger clubs will bid bigger money a year from now,’ wrote Daniel Storey among his pre-season predictions. Salisu will need a bloody amazing 2021 to make good on Storey’s word since he has yet to see any action. Injury has curtailed his progress but when Ralph Hasenhuttl had the chance to give Salisu a debut against Fulham recently, he opted for Jack Stephens instead.

SHEFFIELD UNITED – Chris Wilder
Regardless of what went before, to end the year presiding over the joint-worst start to a season ever by any club in the top four leagues makes 2020 an annus horribilis. Weirdly, Sheffield United haven’t been as bad as some of the Premier League’s previous worst, and Wilder certainly doesn’t seem to have lost the dressing room. But the Blades can’t buy a win this season.

TOTTENHAM – Dele Alli
We’re not suggesting that Jose Mourinho blames Dele Alli for the whole Covid thing, but the Spurs star has been on the manager’s sh*tlist ever since the virus shut down the Premier League back in spring. Prior to that, Alli had a hand in 10 goals in Mourinho’s first 16 Premier League matches in charge, but he’s had only two starts since lockdown began, with his last ended by a half-time hook on the opening day of the season. Still, 2021 looks a lot brighter for Alli, especially if Mauricio Pochettino is getting the old band back together at PSG.

WEST BROM – Slaven Bilic
Bilic was put through the wringer for much of this year. The Baggies took only 13 points from a possible 27 to limp over the finishing line in the race for promotion with Brentford coming to their aid when they most needed it. Bilic was then deprived of the necessary tools ahead of their return to the Premier League and he was eventually sacked immediately after the Baggies earned their most creditable point of the season so far at Manchester City.

WEST HAM – Mark Noble
This was finally the year when West Ham moved on from their captain. Noble, aged 33, has started only three games all season – the opening weekend’s 2-0 home defeat to Newcastle, and the recent clashes with Chelsea and Brighton. With Declan Rice and Thomas Soucek excelling as a partnership at the base of David Moyes’ midfield, the manager tried Noble in a more advanced role against Chelsea and Brighton. Unsurprisingly, it did not work, and Noble was hooked at half-time against the Seagulls.

WOLVES – Nuno
It’s hardly been a horror of year for Wolves and their manager, but Nuno has perhaps received more grief than at any other time during his reign at Molineux. Wolves were desperately unfortunate to miss out on a top-four spot – they finished seventh in the end – while their Europa League adventure also ended up as a tale of what might have been. Changes have followed, some enforced, with the personnel and shape of this Wolves side different at the end of the year to how it started 2020. They currently sit in 12th place and while no one is suggesting that Nuno’s job is in jeopardy, it has been perhaps the most frustrating year of the manager’s tenure.