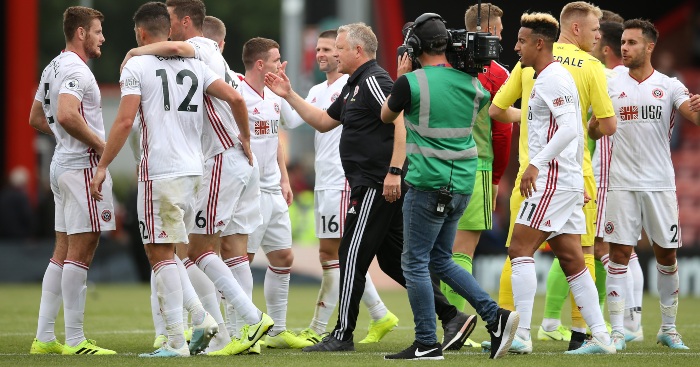 Best player: John Fleck
Any one of five or six Blades could have made convincing cases for why they deserved this accolade. John Egan perhaps staked the biggest claim among Chris Wilder’s goalkeeper and back three, while Oliver Norwood and John Lundstram have been superb in midfield.

But Fleck has emerged as a complete midfielder in the top flight this season. The Scotland international, like many in Wilder’s squad, has taken the scenic route to the big time having started at Rangers and joining United via Coventry City. Wilder brought him to Bramall Lane on a free transfer while the Blades were in League One. Three years later, he’s one of the main driving forces behind their push for the Champions League.

Few at Bramall Lane doubted Fleck’s quality but there were question marks over his goalscoring contribution prior to the start of the season. He scored four goals over two seasons in the Championship. This term he’s helped himself to five in the top flight. And a fat new contract for three more years.

“Ravel has been good for us. Really, really good in fact. I see him as a successful signing. People don’t see what he does in training. Trust me, he’s done well.”

That was Wilder in January, by which time Morrison had played 14 Premier League minutes for the Blades. But we all know what the former Manchester United trainee can do; we just haven’t seen it at senior level.

His signing perhaps spurred on the Blades’ other midfielders and it is hard to see who Wilder could have dropped to give Morrison a game. But the fact he was allowed to join Middlesbrough on loan until the end of the season – he’s struggled for game time there, too – suggests Wilder was buttering up potential suitors rather than encouraging Morrison to keep plugging away at Bramall Lane.

Best performance: Sheffield United 3-0 Burnley
It may not rank as one of their most memorable results but Burnley were battered at Bramall Lane in November while the Blades moved up to sixth in the table – their highest league position since the early 1970s.

Lys Mousset laid on all three goals inside 44 minutes as Lundstram’s brace and Fleck’s first of the season gave United the lead their first-half dominance deserved.

Burnley were dire, admittedly, but the Blades never gave Sean Dyche’s scrappers even a fighting chance. The result – and performance – set Wilder’s side up for three subsequent fixtures against sides who would soon become their rivals for a top-four berth. They emerged undefeated from trips to Spurs and Wolves as well as a meeting with Manchester United.

Worst performance: Liverpool 2-0 Sheffield United
Many managers going to Anfield this season might have been happy to take a 2-0 defeat and get back on the bus with their dignity intact. Not Wilder. United’s defeat to the runaway leaders left the manager fuming.

“Little bit drained – disappointed in our performance tonight, we never laid a glove on them. If there’s ever an example of a team doing well and with the desire, that’s Liverpool.

“The first balls, second balls, running forward, tackling, defending, being aggressive; they showed all those qualities. It’s a great example for our team. We were off the pace. Maybe the Manchester City game took more out of them than I expected – our goalkeeper kept us in the game. For us to get anything, we would have had to perform really well and we didn’t.

“We have been well beaten. People talk about us having afternoons and nights like this when we came to the Premier League. We have not had that done to us all season until now so that’s a small comfort. But it still hurts, we are still professionals. I believe if we played near our best we could have got something but we weren’t anywhere near it.”

Wilder’s message was received loud and clear. The Blades have lost only one other game in the 10 since.

Biggest VAR moment: Denying David McGoldrick his first Premier League goal at Tottenham
VAR has been something of a b*tch for Sheffield United. No side has had as many goals disallowed as a result of reviews, with five chalked off by the officials holed up at Stockley Park.

Ruling out McGoldrick’s strike at Spurs was cruel for a number of reasons. Firstly, it denied the Blades striker a first Premier League goal, which remains elusive. Secondly, it was perhaps the tightest call of the season and certainly the most dubious to that date.

Lundstram, it would seem, was offside by a shoe size. His cross was cleared too; McGoldrick tapped in Enda Stevens’ delivery from the opposite side which came in what many presumed would be interpreted as a different phase.

It was tight but the replays show Lundstram was offside in the build-up#TOTSHU pic.twitter.com/xJyEVHMS4s

Dick move: Oli McBurnie calling Scotland ‘sh*te’
Sheffield United’s social media team did McBurnie no favours, but you could argue there have been other times this season that the striker hasn’t helped himself either…

The Scotland centre-forward was caught on camera discussing the prospect of an international call-up with Fleck. McBurnie suggested that he wasn’t looking forward to the call because the team is ‘sh*te’.

United published the video which, when presented without context, looked damning in the extreme. McBurnie was called up and he offered his version of events to the Scotland squad and Steve Clarke, who said no more about it. His father, from Glasgow, wasn’t quite so forgiving: “My old man was raging at me. He gave me a clip round the ear.”

Did their recruitment work?
A mixed bag…

Henderson and Mousset were the stand-out performers of last summer’s 10 new signings, and the goalkeeper wasn’t a new face. McBurnie, too, had a productive campaign for his club at least. But six other new outfield recruits – Morrison, Ben Osborn, Luke Freeman, Phil Jagielka, Callum Robinson and Muhamed Besic – managed a total of 15 Premier League starts between them.

In Osborn and Freeman’s case, their inactivity has had more to do with the form of those ahead of them rather than any mess of their own making. And Jagielka was brought back to the club for his influence in the dressing room more than his contribution on the pitch.

Wilder smashed United’s transfer record once more in January with the £22million signing of Sander Berge. The Norwegian midfielder will push Lundstram and Norwood next season, though there wasn’t time before the Premier League shut-down for Wilder’s other four winter recruits to make a Premier League start.

Manager’s security:
There’s no safer boss than the Premier League’s Manager of the Season. After taking his boyhood club from League One to the verge of the Champions League in four years, it would take a brave and stupid owner to give Wilder the bullet.

What they need in the summer:
To get the season finished and complete their march into Europe.

Should they do that, the bulk of their recruitment will be based around strengthening the squad. Wilder lacks cover in most areas and the added workload that a European campaign would bring would test that to the limit as it stands.

When it comes to the first XI, the Blades are eager for a decision over Dean Henderson. Should Manchester United decide to keep him at Old Trafford then a No.1 is Wilder’s priority. The manager needs an early decision but it seems increasingly likely that Henderson will be back at Bramall Lane.

Despite spending big on his forward line last summer, that department is the one still ripe for improvement. Any additions in defence or midfield will have a difficult task dislodging the current starters, but Wilder being the character he is will no doubt be keen to give those units a kick up the arse with a couple of new faces.