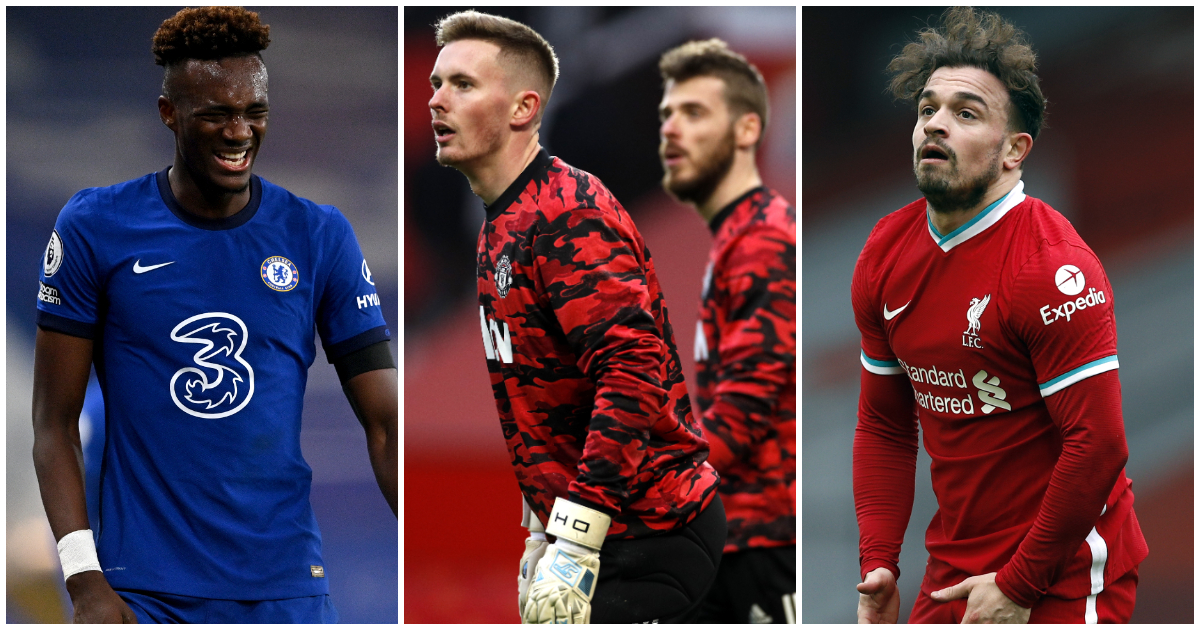 Either Manchester United keeper guards the goal of a side packed full of players Spurs would probably be happy to see the back of.

GK: A Manchester United goalkeeper
Take your pick: De Gea or Henderson? Because United can’t keep both happy again this season. Last term was seen as each keeper’s audition for the long-term role. Neither aced it which leaves Ole Gunnar Solskjaer with a choice to make.

With De Gea’s status and track record, and Henderson’s ambition and ego, extending their trial periods into the new season simply is not an option. The signing of Tom Heaton suggests Solskjaer recognises that. Heaton has returned to Old Trafford to serve as first-choice stand-in. So United will have to at least try to move on one of their senior stoppers.

De Gea’s salary complicates the issue. As does the fact that there is not much of a market for goalkeepers this summer. Spurs might need one if Hugo Lloris moves on with only a year remaining on his contract. Otherwise, most clubs have other priorities. It’s a conundrum for Solskjaer, but one he must solve before the window closes.

RB: Serge Aurier
The Ivory Coast defender has outstayed his welcome at Spurs. Aurier has shown glimpses of quality, especially going forward, but he remains untrustworthy at the back.

Ideally, Spurs would like to return Aurier to PSG and the player would be chuffed to go back too. “I’ve never hidden my desire to go back to PSG one day. It’s my boyhood club and I’m still a PSG supporter,” he said in May when reflecting on the “end of a cycle” at Spurs.

But PSG are wary of giving Aurier a second chance after all the grief he caused off the field before he left the Parc des Princes in 2017. “I wanted a new life because PSG didn’t respect my true worth,” he said at the time, dousing his bridges in petrol while juggling flamethrowers.

CB: Aymeric Laporte
Pep could have a problem with Laporte. The Spain defender deserves to be a starting centre-back at the highest level but as it stands, Ruben Dias and John Stones are his first-choice partnership. Which wasn’t the plan when City signed Dias.

The Portugal defender was bought to play alongside Laporte but injuries, a loss of form and Stones’ incredible resurgence saw Dias excel alongside the England centre-back, leaving Laporte out in the cold.

As City have found, any club battling on four fronts needs at least three top-class centre-backs. But with Nathan Ake also in their ranks, there were reports that Guardiola would be willing to cash in on Laporte.

The player would fancy a return to Spain too, apparently. But with the top clubs in La Liga trying to raise cash rather than spend it, Laporte may have to knuckle down at City.

CB: Toby Alderwiereld
Spurs are chasing a couple of centre-backs, partly with Alderweireld’s exit in mind. The Belgium defender certainly doesn’t subscribe to the theory that you should never go back…

According to The Athletic, there is a desire to return to Royal Antwerp where he left aged 15, and two years ago he said going back to Ajax was “100 per cent in my head”.

Both clubs would be keen on a reunion if the figures are agreeable. But with two years left on a £100,000-a-week contract at Spurs that seems fanciful.

LB: Ainsley Maitland-Niles
The Arsenal utility man would be fuming to find himself at left-back…

“I’m a midfielder by trade, either central or on the wing… I’m not a defender,” he said in 2019. The England international doubled down on that stance earlier this year: “I want to play in the centre of the pitch because I feel comfortable there and there’s a lot of things I can bring by playing in the middle.”

But we’re short of a left-back and having played there in the past for Arsenal and England, Maitland-Niles will have to embrace his versatility. As he likely will to get a decent move this summer.

CM: Moussa Sissoko
Tottenham have an abundance of midfielders, but they are looking for more, despite the pressing need to strengthen their defence and forward line.

Sissoko is one of the players Spurs are keen to shift. The France midfielder remains very much in the thinking of Didier Deschamps but does not cross Nuno’s mind, apparently.

Where next? Napoli have been mentioned but there is no clamour for a player who has been in and out of favour throughout his Spurs career.

CM: Granit Xhaka
The path for Xhaka seems clearer. Roma want the Switzerland star and Arsenal are only too happy to sell – as long as they get a reasonable fee.

Xhaka’s performances at the European Championship will certainly strengthen the Gunners’ standpoint. Arsenal reportedly wanted around £17million, with Roma’s opening bid was around half that figure.

If Xhaka can reproduce his Switzerland form on a consistent basis with a fresh start in Italy, then a compromise between the two valuations would represent fantastic value for Roma.

AM: Jesse Lingard
We regret to inform you that Manchester United are at it again…

Despite it being crystal clear that Lingard doesn’t feature in Solskjaer’s thinking, it is claimed that some at Old Trafford are considering offering the England attacker a new deal to ‘protect his value’. Did Marcos Rojo and Phil Jones die for nothing?

West Ham want Lingard back and Atletico Madrid are apparently interested, which we’d like to see. But neither club are willing to cough up £30million. Unless United compromise then Lingard will go free next year. Surely he wouldn’t be daft enough to sign a new deal when he can pick his contract in a year?

LW: Erik Lamela
The Spurs winger should really have left Spurs the second his Rabona found the bottom corner of Arsenal’s net in the north London derby. Just run off the pitch, out of the Emirates and off into the sunset. But, typically for Lamela, he followed that moment of genius with a needless red card as Spurs succumbed to defeat.

It is that infuriating inconsistency why the Argentinian has struggled to nail down a first XI place at Tottenham. He’s been there eight years; it’s not happening.

Handily, Fiorentina are apparently willing to offer the 29-year-old a return to Italy. La Viola have had eventful summer...

RW: Xherdan Shaqiri
Even when Liverpool’s forward line needed either freshening up or a kick up the arse, Shaqiri was generally ignored last season. Of the five Premier League starts he was begrudgingly handed, Liverpool failed to score in four.

Shaqiri, like Xhaka, was far more influential at Euro 2020 with Switzerland. Three goals and an assist in five games suited Liverpool as they look to claw their money back on the winger signed from Stoke for £13million in 2018.

Lazio’s opening bid of around £10.2million was knocked back, but it seems likely there will be a compromise by the time Shaqiri returns to training at the back end of next week.

CF: Tammy Abraham
Thomas Tuchel could not have made it any clearer that he doesn’t rate the Chelsea centre-forward. He didn’t appear to particularly rate any of the Chelsea centre-forwards, hence why the Blues are going hard for Erling Haaland. It helps that Roman Abramovich lusts after the Borussia Dortmund striker too, and the best time to ask for anything as a coach is when you’ve just delivered the Champions League.

Chelsea, apparently, have tried to chuck Abraham and Callum Hudson-Odoi into their Haaland offer as makeweights but Dortmund, understandably, have turned their noses up at a bit of cash and their former manager’s deadwood. Abraham will have options in England too, with West Ham linked most heavily, but Chelsea may have to reduce their valuation on a striker they clearly don’t want.