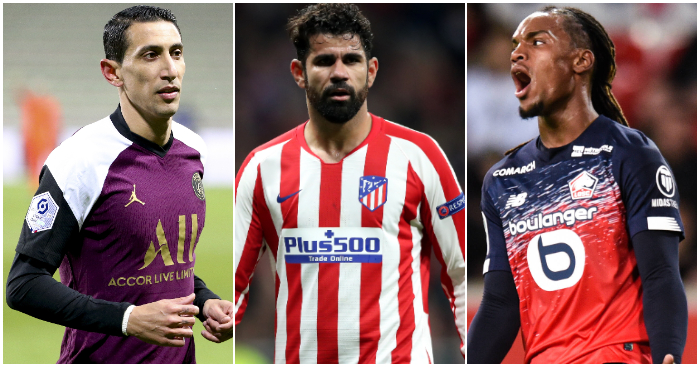 Angel Di Maria
“Talented but a complete fanny,” is just the perfect way to describe Di Maria’s previous stint in the Premier League.

It is hard to imagine how his year as Manchester United’s record signing could have gone any worse. It started well but quickly went south while Louis van Gaal’s restrictions wore down the Argentina winger. When the confidence sapped, which it did startlingly quickly, Di Maria looked and played like a corpse.

There were problems off the field. A burglary attempt at his home rattled Di Maria and his family, who struggled to settle in the north-west. Mrs Di Maria, who never wanted to move to England in the first place, later described Manchester as a ‘sh*thole’ while being very catty about the local cuisine and women.

Maybe London would be more up her street. Tottenham have been linked with a move for her husband, who is approaching the end of his contract at PSG. He may still renew and the 32-year-old is clearly in Mauricio Pochettino’s plans since the new coach has started him in all four games of his reign so far.

Come back, Angel. Show it really was all Louis van Gaal’s fault and prove you’re not a fanny. Not that there’s anything wrong with fannies…

Florian Thauvin
The France winger was another bullied out of the Premier League, as he explained of his failed stint at Newcastle.

“The league is completely different. It’s far more physical,” Thauvin explained to UEFA’s website in 2017. “There’s a lot more contact. You need to be ready, you have to put on muscle before going to the Premier League.”

In hindsight, Thauvin feels he was too young to have joined Newcastle in 2015 for around £12million from Marseille. Steve McClaren labelled him ‘one of the best young players in Europe’, but Thauvin made only four Premier League starts before being loaned back to Marseille half a season later.

He eventually made his return a permanent one after a couple of loans and Newcastle clawed back £9.8million of their failed investment. But after five years back at Marseille, in which time he rebuilt his reputation and became a World Cup winner, surely now the right time for another crack at the Premier League.

Thauvin, now 27, is set to become a free agent in the summer. Italy seems his most likely destination, with AC Milan and Napoli said to be interested. Leicester, though, have also been linked.

Did that dick head Thauvin wear a tux again today or is he gonna start taking this seriously 😏 pic.twitter.com/Nj0tIEWFeq

Christian Eriksen
The Denmark winger has suffered the reverse of Di Maria and Thavin’s fortunes. Eriksen was brilliant in the Premier League but since a big move abroad, he has stunk out the San Siro.

A year after pushing for a move from Tottenham to Inter Milan, Eriksen is apparently craving a return. Inter would certainly be happy to grant the 28-year-old his wish: “Let’s just say he is not functional to the team,” said chief executive Giuseppe Marotta last month. “It is right to give him the opportunity to seek game time elsewhere.”

Spurs continue to be linked with a move for their former star, who became one of the Premier League’s most creative forces in six-and-a-half years at White Hart Lane. But Eriksen turns 29 next month and currently earns considerably more at Inter than Daniel Levy was ever willing to pay him. Inter are also said to be demanding a loan fee from Spurs that they are not demanding from other clubs after Levy rinsed them of £16million just half a season before he would have been a free agent.

Arsenal too have been mentioned a potential destination and while Mikel Arteta could still do with greater creativity, their issues lay a little deeper than where Eriksen made his name. And then there’s West Ham…

Wherever he goes, even if it is PSG under Pochettino, Eriksen just needs to get away from Milan and back to the form that made him a two-time Tottenham Player of the Year.

Diego Costa
One of the Premier League’s best-ever sh*thouses is a free agent. What the shuddering f*** is everyone waiting for?

Costa recently left Atletico Madrid half a year ahead of the expiry of his contract and the former Chelsea striker is looking for a new employer, one perhaps willing to pay him around £270,000 a week, if Marseille coach Andre Villas-Boas is to be believed.

The 32-year-old will surely have to reduce those demands if he wants to return to the Premier League. We have no idea if that is a move the former Spain international would like, but we bloody hope so.

Costa was brilliant for Chelsea before Antonio Conte decided he wasn’t worth the grief, despite having won the Premier League title as a consequence of the centre-forward’s 20 goals in 2016-17. Overall, Costa bagged 52 in 89 league games for the Blues. The bloke certainly knows where the goal is.

Admittedly, he seemed to have a few problems finding it at Atletico – he netted 12 in 61 La Liga games. He would have been perfect for Arsenal before they suddenly became good again, but Wolves are still in the market for a centre-forward while Raul Jimenez continues his recovery from a fractured skull.

We just hope a Premier League chairman somewhere takes a punt on Costa because we’ve certainly missed him.

Renato Sanches
Sanches is a better player than we saw at Swansea. He has to be…

He was loaned to Swans by Bayern Munich, who paid Benfica around £30million for the Golden Boy in 2016, much to Manchester United’s chagrin. Sanches struggled to make an immediate impact at Bayern, not surprising for a teenager, but his failure to make an impact at Swansea was rather more concerning.

“Renato knows he has had a very bad season,” said Carlos Carvahal at the end of a campaign which resulted in relegation, though Sanches didn’t play after January. “Renato has a big talent, but he has much to learn. He stopped learning when he left Benfica and went to one of the biggest clubs in the world.”

Another year at Bayern started promisingly but fizzled out before Sanches made it abundantly clear that he wanted to leave. Which he did, for Lille in August 2019.

At £20million, he became the French side’s most expensive signing ever, but 18 months on, the cash-strapped club would certainly get their money back. Possibly from Liverpool.

Sanches is Portuguese so of course he has been linked with Wolves. Wherever he goes, we need to know that he’s better than he showed at Swansea, where he was once hooked at half-time in a game against Chelsea after mistaking an advertising board for a team-mate.

If we sign him I'm 100% behind him, but everytime I see the name Renato Sanches I can't help but remember that pass to the advertising hoarding when he was at Swansea 😂. pic.twitter.com/gZIcJMNlw7