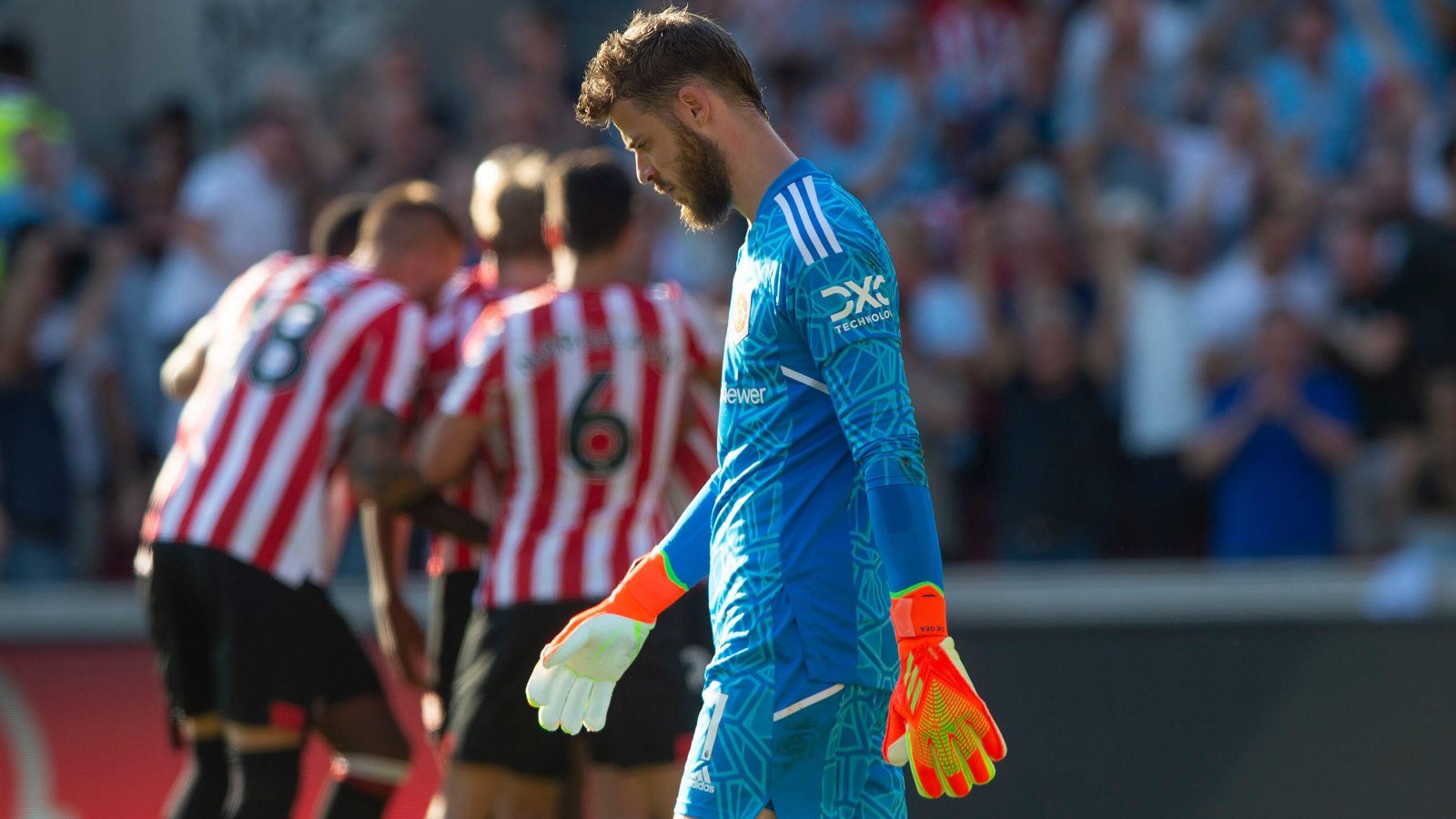 One was David De Gea, but his rating was still very generous. Elsewhere, Youri Tielemans chose a wrong day to have a bad game.

GK: David De Gea – 6.12
We’re flabbergasted the Man Utd keeper earned a six after a first-half horror show at Brentford. The first goal was his mistake, and he was largely culpable for the second too. Leicester’s Danny Ward was awarded the same rating for his performance in the 4-2 defeat Arsenal but we’re making a judgement call – De Gea was unspeakably bad, as he admitted.

RB: Adam Smith – 6.28
The Whoscored algorithm was in a generous mood across the board this weekend, with far fewer fives being handed out than we’d normally expect. Normally Smith’s score from the 4-0 defeat at Man City would spare him from inclusion –  the Bournemouth right-wing-back was only 0.13 worse than City’s Kyle Walker – but not this week. The 31-year-old was no worse than any of his team-mates and actually rated better than Jack Stacey, the Cherries’ wing-back on the opposite side, as well as Lewis Cook and…

CB: Jefferson Lerma – 6.01
Scott Parker chose to keep midfielder Lerma in defence and Argentinian centre-back Marcos Senesi on the bench, and since most specialists will struggle with Erling Haaland and City this season, it would be churlish to be too hard on the Bournemouth man. Marked down for an unfortunate own goal even if his feet were nailed to the floor when Joao Cancelo smashed the ball across the box.

CB: Jonny Evans – 6.21
The Leicester defender looked to have the measure of Gabriel Jesus early on, but then the Arsenal striker had his way with Evans and the rest of the Foxes. The Northern Irishman lost three of his four duels and came out the loser in his only attempted tackle.

LB: Lucas Digne – 6.06
Digne’s scruffy own goal late on made for a ridiculously nervy ending for Villa, during which time Everton should have equalised. The ex-Toffee won only 40% of his duels, while going forward – as he must in this Villa side – five of his seven crosses reached Everton players while none of his three dribbles were successful.

CM: Christian Eriksen – 5.66
Back at Brentford, where he was weirdly booed, Eriksen was attributed with an error that led to a goal and while it was his giveaway for Mathias Jensen to score the Bees’ second, the root cause was a poor decision by De Gea to give it to him in the first place. Eriksen was actually one of the shiniest turds in a United side that, incredibly, contained no other players scoring below a six. Marcus Rashford scored 7.24. Silly computer.

CM: Youri Tielemans – 6.00
We assume the Belgium midfielder was hoping to impress Mikel Arteta so that Arsenal would pull their finger out and actually make an offer, but instead, Tielemans may have condemned himself to another season in Leicester’s midfield. Hooked by Brendan Rodgers after failing to find his first touch for an hour.

RM: Daniel Podence – 5.67
The Wolves winger, playing a more central role against Fulham, managed to find a team-mate with only half of his 30 passes at Molineux on Saturday. Podence had one big chance which he missed by some distance and lost four of his five duels.

LM: Philippe Coutinho – 5.89
The Brazil star kept his place in Steven Gerrard’s XI but Coutinho repaid his manager’s faith with a largely anonymous performance against Everton that lasted only an hour. Then Emi Buendia came on in his place – his preferred position as a no.10 – and in the half hour that remained created more chances than any other player on the pitch and scored Villa’s decisive second goal. The bench surely beckons against Palace next week, assuming he’s fit, since Gerrard seems to have found a shape that suits Villa.

CF: Callum Wilson – 6.00
Wilson emphasised Newcastle’s need for a new forward with a largely invisible performance at Brighton, where he lost more duels – eight of his 10 – than anyone else on the pitch. Released from Lewis Dunk’s pocket only upon being substituted late on.

CF: Brennan Johnson – 5.92
The Forest youngster makes this XI for the second time this season, which feels harsh because he hasn’t looked out of his depth in his first two games as a Premier League player. Last week he was little worse than any of his team-mates at Newcastle, while on Sunday against West Ham, he was a lively presence throughout and was only denied his first top-flight goal by a marginal offside call.