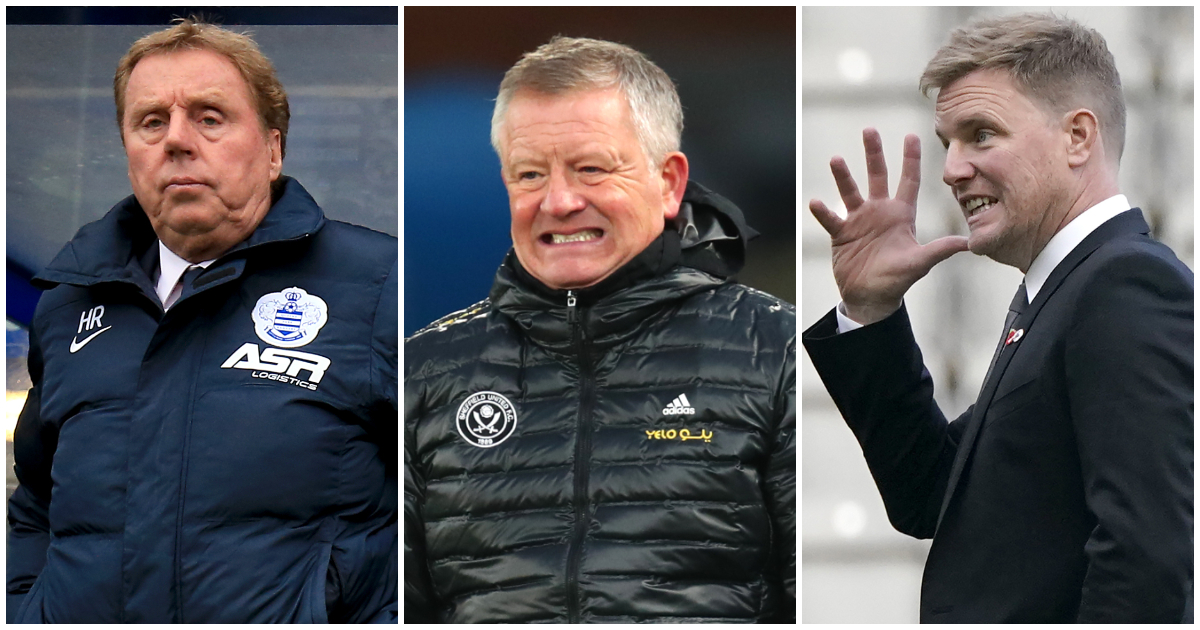 Newcastle, winless in 11, are the 16th team to go without a victory in the first 10 games of a Premier League season. So how did the previous 15 fare? SPOILER: Not well…

10 winless games – Watford 2006/07: Relegated
Watford actually found themselves as high as 18th despite failing to win any of their first ten games, before climbing out of the bottom three with their first win, a 2-0 success against Middlesbrough. Alas, that would represent the zenith as, with only four further wins, the Hornets finished bottom of the pile and ten points adrift of safety.

10 – Burnley 2014/15: Relegated
Three goalless stalemates and a late, late 2-2 draw at Leicester were all Burnley had to show for 10 games’ effort after promotion to the Premier League, before back-to-back wins over Hull and Stoke raised spirits. When Ashley Barnes’ goal secured a win over Southampton three games later the Clarets had taken 11 points from six matches and climbed out of the bottom three. A brutal festive fixture list featuring Tottenham, Liverpool and Manchester City in the space of eight days stalled the recovery, though, and a run of two wins in 19 games meant even seven points from the last three wasn’t enough.

10 – Sunderland 2016/17: Relegated
Sunderland’s decade-long stay in the top flight ended in spectacular style under that man David Moyes. Despite Jermain Defoe’s 15 goals, a 1-1 draw at Southampton in the third match of the season represented the last time Sunderland would be outside the relegation zone. They lost eight of their first ten games, meaning not even a subsequent run of three wins in four could lift them higher than 18th.

11 – Manchester City 1995/96: Relegated
Your millennials won’t believe it, but Manchester City used to be reliably and entertainingly crap. It was a simpler and better time. In the 1995/96 season they followed up a 1-1 opening-day draw against Spurs with a heroic eight-match losing run and after a 6-0 spanking at Anfield they had gone 11 games without success before a 1-0 victory over Bolton started a run of four such only-goal wins in five games. City soon reverted to type, though, and ultimately went down on the final day despite fighting back from 2-0 down to draw 2-2 with Liverpool.

11 – Blackburn 1996/97: Survived
Less than 18 months after winning the title, Blackburn had sold Alan Shearer, been dumped out of the League Cup by third-tier Stockport and were without a win in their opening 11 Premiership games. Out went Ray Harford, in came long-serving coach Tony Parkes to save the day. They finally got off the mark – and how, thrashing second-placed Liverpool 3-0 thanks to a Chris Sutton brace – in game 12 and a run of five wins in nine matches, starting with a 1-0 win over Shearer’s Newcastle on Boxing Day, lifted Rovers out of the drop zone to the safety of mid-table.

11 – Reading 2012/13: Relegated
2012/13 was one of only two occasions two teams have reached ten games without a win in the same season and nine years ago, those two teams finished in the bottom two spots. Reading may have got their first win five games earlier than fellow strugglers QPR, but their fates were the same. The Royals’ first win came against Everton in mid-November, and a run of four wins in six games in the new year actually lifted them briefly out of the bottom three. But having started the season with no wins in 11, they finished it with another hapless run of one win in 13. A 0-0 draw against QPR fittingly condemned both sides to the drop.

11 – Newcastle 2018/19: Survived
Newcastle have been here before and it was Rafael Benitez at the helm three years ago when the Magpies waited until matchday 11 and the visit of Watford to finally win a football match. That 1-0 win over provoked something in the Toon because they went on to win three on the bounce, with Eddie Howe’s Bournemouth and Howe’s other old side Burnley put to the sword. That mini-revival saw Newcastle climb from second bottom to 13th and they only entered the drop zone once more before ending the season in 13th. Then came Steve Bruce…

11 – Huddersfield 2018/19: Relegated
There were fireworks for Huddersfield’s first win in their second season in the Premier League but only because they waited until sodding Bonfire Night to achieve it. And even then, Fulham did the job for them. Presumably feeling sorry for the Terriers having gone 659 minutes without scoring a home goal, Timothy Fosu-Mensah headed one into his own net to take their place at the bottom of the table. It sparked a fightback of sorts, with David Wagner’s men drawing their next game and winning the one after that. Then they went 14 more matches without a win before finishing the season winless in 11 and rock-bottom of the Premier League.

11 – Watford 2019/20: Relegated
Of course Watford sacked a manager amid a poor start to the season. Four games without a win did for Javi Gracia and it took Quique Sanchez Flores another eight games before the Hornets finally tasted victory at Norwich. Flores was given another couple of games before Nigel Pearson became their third of four managers throughout the course of the season. Pearson made a decent fist of trying to save Watford, with notable wins over Manchester United and Liverpool – the Reds’ first defeat of the season. Indeed, the Hornets spent only two of the last 11 matchdays in the bottom three. Sadly for Pearson, it was the final two.

12 – Everton 1994/95: Survived
Some encouragement for Newcastle: Everton didn’t bother winning any of their first 12 games in 1994/95, even though four teams would go down that year as the league went from 22 to 20 teams. Yet not only did Everton end up in a nosebleed-inducing 15th, they also won the FA Cup. The first win – a 1-0 success against West Ham at the start of November – started a run of seven clean sheets, although it was only after a 3-1 win over Palace in January that Everton finally left the relegation zone, never to return.

13 – Derby 2000/01: Survived
Yet more good news for Newcastle fans here, with Derby actually managing to survive despite failing to win a game in the first third of the 2000/01 campaign. Seven draws in those winless 13 games helped, and after the first win – a 2-0 success against Bradford in November – more soon followed. Ludicrously, Derby were out of the bottom three just two games after registering their first win of the campaign and never dropped back into the drop-zone. They eventually finished just one place but a whopping eight points clear of relegation.

13 – Norwich 2004/05: Relegated
Norwich drew eight but won none of their first 13 games before breaking their duck with a 2-1 home win over Southampton on November 20. The Canaries looked doomed with just three wins from their first 31 games before a 2-0 victory over Manchester United kicked off a run of four wins in six that saw them outside the bottom three going into the final day. They then promptly lost 6-0 at Fulham on the final day and finished 19th as West Brom leapt from 20th at half-time on the final day to 17th at the final whistle.

15 – Swindon 1993/94: Relegated
Back in the day when men were men, shirts were baggy, pitches were boggy and Swindon played their first and still only top-flight season. Three years after being denied a top-flight spot due to financial irregularities, Swindon at last reached the promised land but promptly lost inspirational player-manager Glenn Hoddle to Chelsea. John Gorman was left to take up the reins and it was deep into November before a 1-0 win over QPR put the first Premiership W on the board for the Robins. Swindon became the first top-division side in 30 years to concede 100 goals and they finished ten points adrift at the foot of the table. There were memorable moments, though, including a 2-1 win over Spurs and 2-2 draws with Liverpool and Manchester United. After relegation, Gorman said Swindon “wouldn’t be in Division One for long”, and he was right. They were relegated again the following year.

16 – QPR 2012/13: Relegated
Until this year, Rangers held the record with an epic 16-match winless start under first Mark Hughes and then Harry Redknapp that didn’t end until an Adel Taarabt double secured a 2-1 win over Fulham on December 15. Rangers then lost their next three over an unhappy Yuletide before inexplicably starting 2013 by winning 1-0 at Chelsea. Alas, only two further wins would follow, and a drab goalless draw at Reading in a game both needed to win confirmed a long inevitable relegation.

17 – Sheffield United 2020/21: Relegated
The Blades set a new benchmark for sucking at the start of last season, going almost half the campaign before finally winning at the 18th time of asking. Just when it seemed like they might never win again, mercifully, Newcastle came over the horizon and turned in a performance at Bramall Lane that Steve Bruce described as “frigging hopeless, absolutely sh*te”. Still, even with a man advantage from the stroke of half-time, it took a late penalty to finally earn Chris Wilder’s side their first three-point haul. United won two of their next four, including against Man Utd at Old Trafford, but they remained bottom of the table and were relegated with seven games still to play.