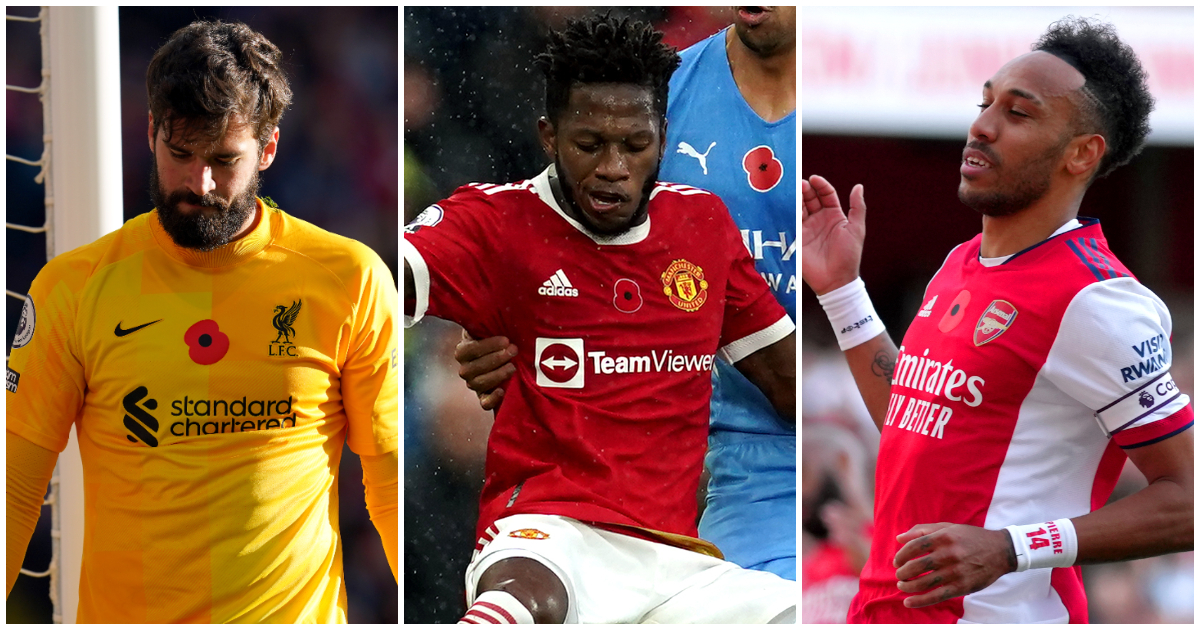 Calamity Ali in the sticks, with two of Man Utd’s three rotten centre-backs ahead of him. Sheesh…

In honour of Manchester United’s surrender in the derby, this weekend’s worst XI based on Whoscored ratings is going three at the back…

GK: Alisson – 5.26
One Mailboxer felt the Liverpool keeper had ‘a real Calamity James look’ about him in the defeat at West Ham. Throwing one in your own net while conceding three certainly offered that impression. Though it probably wasn’t because he’d ‘been out on the cans in London’ as much as we wish he had. Lewis Dunk rated higher in Brighton’s goal. Probably.

CB: Eric Bailly – 5.33
If the Man Utd centre-back really did call out Ole Gunnar Solskjaer for picking a one-legged Harry Maguire over him at Leicester, then the manager need only point to his 45 minutes in the derby and the latest in a long line of one of Kamikaze Eric’s ‘moments’. Bailly is great fun to watch, but rarely for the right reasons.

CB: Victor Lindelof – 5.96
Having watched Bailly smash one in at the Stretford End, Lindelof had a go himself not long after but David De Gea made one of his 427 first-half saves to spare the Swede’s blushes. Lindelof passed a late fitness test to play but after no interceptions or tackles while City strolled around United, he almost certainly wishes now that he hadn’t.

CB: Emil Krafth – 5.99
The Newcastle defender seems to be becoming something of a regular in this side, though having watched the draw with Brighton on Saturday night, nothing he did stood out as being particularly wretched. Which is perhaps because he did almost nothing. No tackles, interceptions or blocks. He did, however, attempt a couple of crosses and three long passes. None of which came off.

LWB: Luke Shaw – 5.55
The Man Utd left wing-back’s blow to the head came in the second half though he looked certainly concussed towards the end of the first when he allowed Joao Cancelo’s cross to reach Bernardo Silva. David De Gea is still shaking his head this morning…

RWB: Mason Holgate – 5.11
We normally go easy on substitutes, but the Everton defender’s score cannot be ignored. He came on to the pitch on 81 minutes and made the return journey after a straight red card on 91 minutes. Special mention to Aaron Wan-Bissaka, who somehow earned a 6.34 from Whoscored, but 1/10 from the Manchester Evening News.

CM: Fred – 5.96
“Anyone who tells me Fred is good enough for United – they’re in cuckoo land.” That was Roy Keane’s verdict after the derby, but sadly for United, it seems Solskjaer is the president – and perhaps only resident – of Cuckoo Land. For as long as Ole’s at the wheel, Fred is in the XI.

CM: Juraj Kucka – 5.05
Danny Rose was probably Watford’s worst player at Arsenal where he committed four fouls and conceded a penalty before half-time. But Kucka did not benefit from similar leniency, with the midfielder seeing red after one mis-timed tackle too many.

AMF: Trincao – 5.79
The attacking midfielder was anonymous as Wolves’ five-game unbeaten run came crashing to a halt at Palace. Trincao lost possession 14 times before being hooked halfway through the second half and seems unlikely to keep his place after the international break, though he was hardly the only Wolves player to stink out Selhurst Park…

FWD: Hwang Hee-chan – 5.72
“He’s Korean, he’s only on loan for the season, we think he’s f*cking brilliant, he’s Hwang Hee-Chan,” sand the Wolves supporters at Selhurst Park, but the forward failed to live up to the lyric on this occasion. Hwang won only one of 11 duels overall while losing possession 13 times. But after a very positive start to life at Molineux, the forward can be forgiven an off-day.

FWD: Pierre-Emerick Aubameyang – 5.94
A frustrating afternoon all round for the Arsenal skipper. His poor touch led to Bukayo Saka being offside when Arsenal appeared to have broken the deadlock before he saw his first-half penalty saved by a 68-year-old You Tuber. Aubameyang had the lowest passing accuracy percentage of any Arsenal player having managed only 15 passes in 90 minutes. None of his two crosses or single long pass found a team-mate.