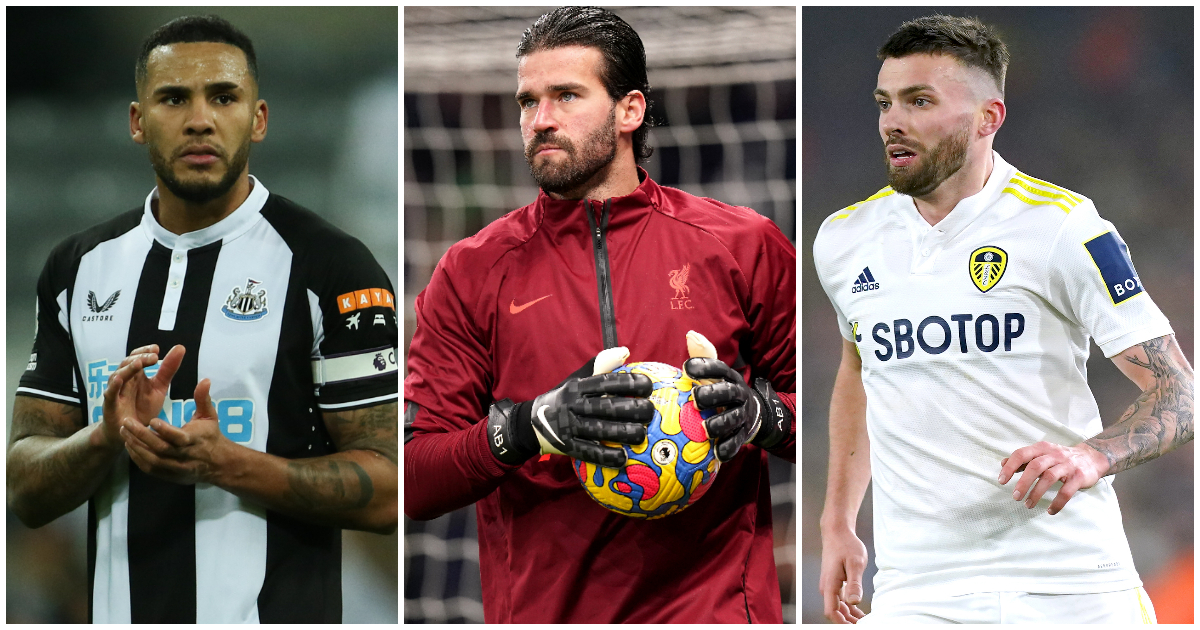 The outfield ranks are made up exclusively of Newcastle and Leeds players, with Alisson doing a stint in the sticks, too.

GK: Alisson/Martin Dubravka – 6.08
After conceding six between them on Sunday, Alisson and Dubravka will share the gloves. Both made costly errors, with the Liverpool stopper gifting Son Heung-min an equaliser for Spurs, while the Newcastle keeper was culpable along with Ciaran Clark for Manchester City’s opener. Both also made superb stops, Alisson denying Dele Alli and Dubravka keeping out Gabriel Jesus from point-blank range. So with no splitting them, they get a half each. Which will be enough for anyone behind this back three…

CB: Ciaran Clark – 4.81
Returned to the starting line-up after a three-game absence and was obviously still finding his bearings when he chose to let the ball bounce in the City box, gifting Ruben Dias an early opener for City. Jamie Carragher also took issue with his defending for City’s second when Joao Cancelo was allowed all the time in the world to pick his spot from outside the box.

CB: Jamaal Lascelles – 5.49
Lascelles also copped it from Carragher after he and Clark both turned away from Cancelo’s shot: “The two centre-backs, Lascelles and Clark – he has time to take another touch! It’s unbelievable. The gap… both of them turning their back. That’s nothing to do with ability. Defensively, you’ve got to throw yourself at it, make yourself as big as possible. The two of them are as small as possible.”

CB: Robin Koch – 5.57
Hadn’t played since the opening day humping at the hands of Manchester United and Koch looked extremely rusty upon being rushed back to bolster Leeds’ depleted ranks. With 52 touches, the Germany international lost possession 11 times.

RWB: Jacob Murphy – 6.01
As a right-back, Murphy battled but he was given a chasing by City, which culminated in having his pants pulled down by Jesus in the build-up to the champions’ fourth goal. Kieran Trippier can’t sign soon enough.

LWB: Stuart Dallas – 5.64
The Cookstown Cafu hasn’t missed a minute of Premier League action this season but Dallas would be sweating on his place in Marcelo Bielsa’s XI after a poor showing against Arsenal if Leeds weren’t beset with injuries. Never got the measure of Bukayo Saka while Arsenal bossed their right flank. A booking dented his rating further.

DM: Adam Forshaw – 5.57
Forshaw’s return has been one of the few positive stories in a wretched season so far for Leeds, but the midfielder was off the pace against Arsenal. Robbed inside his own box by Lacazette prior to Gabriel Martinelli’s opener and spent much of the evening chasing Martin Odegaard’s shadow.

DM: Joe Willock – 5.78
After scoring in seven games in the second half of last season to persuade Mike Ashley to get his wad out, Willock has yet to net this term. But he is having to get used to playing in a deeper role, which evidently is still unfamiliar if his performance against City before being hooked at half-time is any indication.

AM: Tyler Roberts – 5.94
The Wales international played off frontman Joe Gelhardt and he popped up in some promising areas but Roberts was a bigger danger to his own defence than Arsenal’s with his error giving Arsenal possession to break and score their fourth goal.

FWD: Callum Wilson – 5.95
The Newcastle defender drew a superb save from Ederson with a close-range header but that was all he had to show from an afternoon mostly spent inside Dias’s back pocket.

FWD: Ryan Fraser – 5.91
Fraser’s score would have been bumped up had he been awarded the penalty he deserved after being bundled over by Ederson in the first half. It’s now 21 games and almost 11 months since the Scotland international played a part in a Newcastle win.